These two lovebirds don't know it yet.

First of all, hooray for another film this year taking its title from an old Shashi Kapoor favorite! What's ironic is that Jaane tu ya jaane na was a fairly typical romantic filmi song - that is, the boy (Shashi Kapoor) was smitten and pursued the girl (Sharmila Tagore) until she gave in - whereas the film Jaane Tu... Ya Jaane Na (Whether you know it... or not, or JTYJN) tries very hard to break away from this tradition and instead present a new type of Hindi film romance. Rather than relying on lightning bolts, instant infatuations and eternal dedication, JTYJN show us love that is often blurry and indistinct. Rather than a seven-lifetime guarantee, it's a series of ambiguous choices and vague, mutable feelings. Love doesn't happen to the characters in this film, they (sometimes, messily) happen to love.

Generally, the film succeeds, and so it's a breath of fresh air to the seasoned masala veteran (not that we don't unambiguously, lightning bolt-style love masala and remain eternally dedicated to it). The performances are, on the whole, aiming for natural, low-key charisma. No one is secretly related (what?!), there are no cackling villains and the only brother-sister duo is really... normal. Like, they bicker a lot (the brother at one point calling his sister a "stupid, stupid cow!"). This film had great pedigree - financially backed by the thinking man's favorite, Aamir Khan, with music by the genius A.R. Rahman - and we had been listening to enthusiastic endorsements from all our filmi-inclined friends ever since its release earlier this year. So does it deliver? Overall, yes.

An excellent and quirky cameo by Naseeruddin Shah. We love it when the the Shahs play husband-wife in offbeat romantic comedies!

The story centers around a tight-knit group of college friends. Our hero is the sensitive, pacifist Jai (newcomer Imran Khan, nephew of Aamir). His best friend is the turbulent Aditi (Genelia D'Souza). Jai and Aditi are inseparable, and have been for the entire five-year college course, so naturally everyone assumes they're together. However, when Aditi's parents (Anuradha Patel and Jayant Kripalani, who we kept mistaking for Kader Khan) suggest marriage, the two kids recoil in shock. Marry my best friend?! No way! Just to prove how completely not-in-love they are, both attempt to find a perfect match for the other. Jai speedily runs into Meghna (Manjari Phadnis), and sparks fly. A bruised Aditi meanwhile rushes into a relationship with parental-approved Sushant (Ayaz Khan), whose nastiness is revealed layer by creepy layer.

The main theme of the movie seems to be "love is what you make it" - that is, it's not the sure-fire thing often portrayed in movies, but rather is something that is hard to pin down and hard to navigate. Just as Chori Chori satirized marriage, JTYJN satirizes love with the same half-cynical, half-affectionate air. Most of the relationships in the film are less-than-perfect. The happiest couple in the film - the geeky Rotlu (Karan Makhija) and Sandhya (Alishka Varde) - were both jonesing for someone else, got together on a whim, and found that they enjoyed each other's company much more. The "other girl" and "other boy" - Meghna and Sushant - are shown as imperfectly in love as well. That is, Meghna is willingly blind to the mutually abusive relationship between her parents (a surprise cameo by Rajat Kapoor playing the creepy alcoholic very well, and who was the mom?). Meanwhile Sushant is slowly revealed to be a possessive Lothario whose heart (and loins) is still pulled in many contradictory directions.

This slightly tongue-in-cheek vibe is reinforced by the moments of self-conscious and humorous cliché: Jai mounting a white steed to chase down his beloved, the final climax in an airport. Because these clichés are portrayed with grace and wit (the subplot about how Jai gets on that horse is sweetly silly), we laughed and sighed instead of groaning. Indeed, throughout the film there were moments when we found ourselves a little choked up with tears and laughter - it was really quite affecting! For example, a running subplot (that involves the horse too) centers around Jai's late father, Amar Singh Rathore (a wonderful cameo by Naseeruddin Shah), who proclaims from beyond the grave and a Harry Potter-esque talking portrait that his son must grow up to be a macho mard, pride of Rajasthan. Jai's exasperated mother (Ratna Pathak, Naseer's wife) instead fights to keep Jai on a "Gandhi-Buddha" path of pacifism and sensitivity. A poignant and funny scene occurs when Jai, upset about the tortuous love quadrangles, cries on his mother's shoulder (see, boys can get hurt in love too, world!). She coos maternally ("Let it out, son!") while the painted father rolls his eyes in disappointment. There were other sweet, funny grace notes which fleshed out the film's appeal - we won't give any away, but the officer trying to describe "the terrorist's meowing" on the walkie talkie was priceless.

A very silly, nice moment. And a great shot.

We're very much looking forward to more work from all the performers - well, okay, we're a little wary of Imran Khan's follow-up Kidnap - and we're especially impressed with Abbas Tyrewala, who directed and wrote the film. Some of those shots were amazing! And vah! Kya dialogues thi! Overall, this was a fun, charming movie. We recommend it - especially for showing to Bollywood virginal friends, as its appeal requires no previous masala experience. And Mr. Tyrewala sir: more, please! 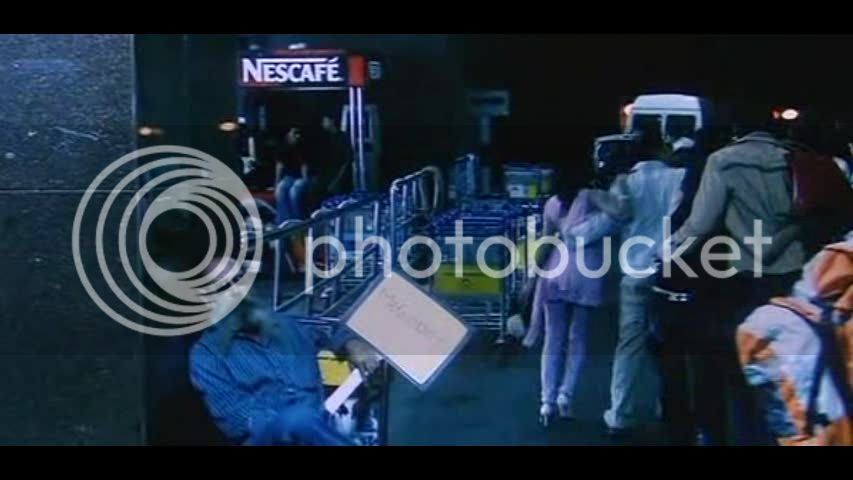 Nice review. Enjoyed the movie overall, but the final act was somewhat of a letdown. Anything with Sohail Khan is pure poison to me ;) And Meghana's mother was played by Kitu Gidwani. Was a pretty famous Model\ TV actress in the late 90s, early 2000. Some small film roles as well. Then she just disappeared. Some kind of a comeback in the last 1-2 years..TV, films etc. Cheers

Well now. Clearly I have to see this - it sounds so cute! I was not so moved by other people's write-ups but I have faith that PPCC will not steer me wrong.

I'm really intrigued by the "love involves work and careful thinking" sort of angle - that definitely appeals to my pre-Bollywood self, as well as to my grudging suspicion that that is more realistic (at least in my world) than filmi love. But as you say, not that there's anything wrong with that. There is more than enough room for both approaches (even in the same person - cf Shakespeare-Wallah write-up).

Hey PPCC, usually we are on the same page when in come to movies, but with this one I will have to disagree. Yes it does steer away from the normal bollywood formula, but then to direct itself to the typical hollywood romantic-comedy formula. Anyway, it let me down. I had high hopes, like you said it was backed up by Aamir Khan and the music by A R Rahman(but clearly not at his best). And don't get me started on the "everyone can see it coming ending". Overall, it was ok, but not as good as I expected.

P.S. But Imran Khan was pretty interesting and I will like to see his choice of caracters for films in the next few years.

What a coincidence--I just saw this last night! Very cute, fun film indeed! I think this will be one of my classics-I can see myself rewatching it several times and not getting sick of it...

And how hot was Imran Khan? Yum!!

I thought Genelia was charming, too. Hope to see both of them in some good stuff soon!

Beth--you've got to see this film! "Cute" is probably the best way to describe it...its one of those films that made me feel like I was a part of the character's lives, and I liked being there!

P.S. As for Meghna's mother, it was Kitu Gidwani from "1947 Earth" and the Basmati rice commercials that sometimes precede films.

Abbas Tyrewala is directing the John Abraham film being made in my home town this summer :)

He also wrote the dialogues for the first Munnabhai film, I think he's extremely funny.

Haven't watched this yet, but will soon!

Srinivas - Thanks for the info! They did a great job in that short scene, I was impressed.

Beth - I think this movie was very nice and cute. Not so earth-shatteringly amazing (as some people had told me), but then what moves the earth for some might not for others. Still, it is refreshing - and agreed on the pyaar philosophy! (Pyaarology!)

Stella1 - Oh no! I'm sorry you were disappointed. This did come with a lot of hype, which - alas - can sometimes kill a good movie's chances of appealing (the same happened with me and Slumdog Millionaire). Imran seems very interesting, though!

Nida - "Cute" indeed! And thanks also for the info!

Memsaab - Oh no! Mayhap I should slow down? But then I reckon I should stoke the fire while it's burning. Abbas Tyrewala must direct more, I have decided. Yay for John Abraham too - he's been making such interesting choices!

Oh my goodness, this was one of the worst films of the year for me!! I guess my loathing of the non-lightening bolt romance film runs pretty deep... ;P

Hi! I just saw this last week, and I enjoyed it. I didn't find it completely original with bits taken from Chalte Chalte and Love Actually which was disappointing, but fun to watch nonetheless. I really enjoyed Imran and am also intrigued to see the path his career takes.

"No one is secretly related (what?!)"

Not entirely true, PPCC. Remember the jail scene? Of course, like you pointed out in the review, the cliche was quite tongue-in-cheek and pretty sweet.