THE JODI: a bonanza of love! 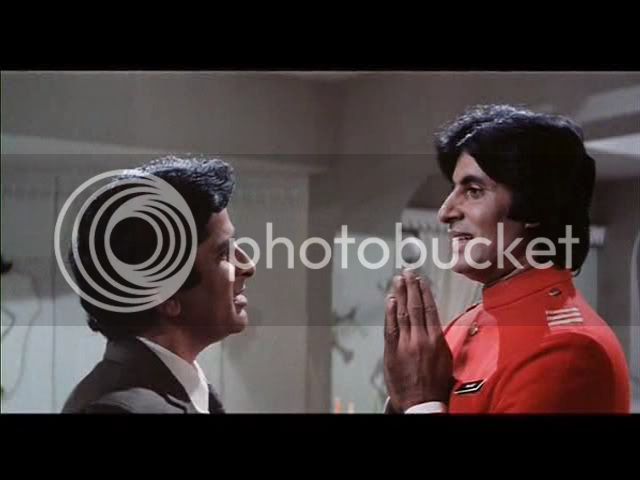 The rest of this list isn't in any order, but this is definitely first. It would be silly to pretend that our favorite genre of Hindi films isn't masala - that unique and characteristic blend of outrageous, operatic, zany emotionalism that they make so well in Mumbai. Fellow blogger Beth has already discussed what aspects makes masala masala (dishoom dishoom, gangster lairs, lost babies, disguises), and indeed the masala genre - especially its golden era in the 1970s - is much beloved by the blogosphere. We have to admit - masala is like crack. Once you start, you can't get enough. Or maybe it's like sushi - an acquired taste, addictive for the converts but unpalatable for those missing the gene. Masala demands that you suspend all logic to honor instead the big heart of humanity. Dishoom! Its high point, we would argue, was in the mid to late 70s with the films of Manmohan Desai, though there have been some peaks since then (e.g. Farah Khan's films).

The jodi that best defined that golden era of 1970s masala was, of course, our beloved Shashi Kapoor and Amitabh "Biggest superstar of Bombay" Bachchan. These two met at the party that was Roti Kapada Aur Makaan, but they fell in bromance in Deewaar. The chemistry between these two already very charismatic actors was magnetic - whether they were playing estranged brothers or even antagonists, we could rest assured that they would always have a very strong connection. Like the Force! They complimented and contrasted each other as a quirky yin and yang: Amitabh's macho bravado against Shashi's fey dandying. Sometimes one would be the "straight man" to the other's gags (e.g. Amitabh begging Shashi not to report him in Suhaag), sometimes the roles would switch (e.g. Shashi begging Amitabh to save him from marriage in... Suhaag again). They had unique and different screen presences (and hotness factors) which, combined, became even better. Like... chocolate and raspberries! Pizza and pineapple!

What are some magic jodi moments? Most people would probably point to the iconic "Mere paas maa hai!" dialogue from Deewaar, but we've never cared for that film. Instead, we love:


Where can I watch this jodi in action? Deewaar, Suhaag, Immaan Dharam, Trishul, Do Aur Do Paanch, Namak Halaal, Silsila, Kaala Patthar... and in particular Aa Yaar Sun.

Anyone else reminded of Broken Social Scene's Lover's Spit? "Oooooh, all these people drinking lover's spit, sit around and clean their faaaace with it."

We must make special mention of our newest favorite jodi, Rani Mukherjee and Anil Kapoor. These two are endangered because, as Anil creeps along to 30 50 (!), it becomes increasingly unlikely that he'll be playing many hero roles and indeed, as Filmi Girl notes and we agree, he's instead moving into the Pran territory of character roles. Meanwhile, Rani, at 30, is in her heroine prime - though heroines have a much shorter lifespan than heroes in Bombay, and so she might be finding herself in that netherworld of Juhi Chawla-esque pre-"Naaahiiiiin!"-ing Mom roles in ten years (good for this jodi!). Either way, it's unlikely that we'll see this jodi again anytime soon - as much as we really, really would like to, Mr. Bollywood Producer! Surely Anil's producer brother, Boney, can get something going for these two? Maybe they can be the kooky sideplot couple in some multi-starrer melodrama? (Though, honestly, we'd prefer to just give 'em a big ol' three-hour masala meltdown movie as hero and heroine. That would rock!)

Anyway, the reason we like these two so much is because, as with all good jodis, they have great chemistry. They're both talented at comedy of the squishy dil variety; e.g. expressive, funny and able to freely burst into tears. They can both carry much more depth, if needed. But we really like them for their light-hearted romping in Nayak, our newest favorite movie. Those acid trip scenes won us over completely.


Where can I watch this jodi in action? Nayak, Calcutta Mail, the movie that we're going to make the day we win the lottery and take over Bollywood... and that's IT!

Jodi of the Future
Farah Khan and Shah Rukh Khan, "Yes, we Khan!"

While choreographer/director Farah Khan and superstar Shah Rukh Khan have been friends since their early days in Mumbai, they only started their most potent collaboration in 2004 with Farah Khan's directorial debut, Main Hoon Na. This film revived in grand style the best of masala (which the Shashitabh jodi embodied): it was loud and beautiful and fun and frantic and smart. The two followed this up with 2007's Om Shanti Om, which was even louder and more fun (though with a crazy second act... a more unfortunate masala characteristic!). Given the superhit status these two films achieved, we're pretty sure that Farah and SRK will be teaming up again, and we look forward to whatever they'll give us with great anticipation!

Why is this jodi so great? Well, Farah Khan knows masala and she knows exactly how to use SRK. The man was made to be a singing, dancing, charming performer - a star, more than an actor - and Farah puts his hamming and preening to work in the best possible context. Om Shanti Om, in particular, is loaded with a knowing, self-deprecating sense of humor as we watch SRK the struggling extra ham his way up to SRK the egotistical superstar, with ample in-jokes along the way. We love Farah and SRK because they are two intelligent entertainers who make seemingly "brainless" pop which is actually not so brainless at all!


Where can I watch this jodi in action? Main Hoon Na, Om Shanti Om, and almost any SRK dance routine in the 90s and 2000s was choreographed by Farah... so we'll just pick the legendary Chaiyya Chaiyya from Dil Se as representative. 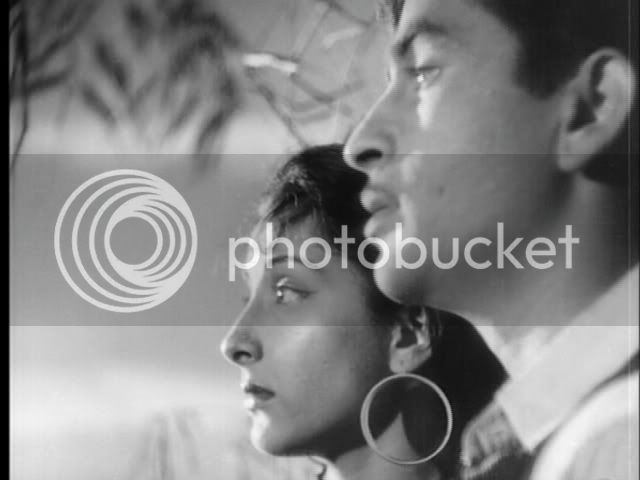 Sigh. Raj and Nargis. To call what they had "chemistry" is to undervalue it. These two were on fire. They were electric, magnetic, alive. Perhaps it was due to their rumored affair, but watching Raj Kapoor and Nargis together on screen was something so elegant, intimate and intoxicating that we at the PPCC always feel a little voyeuristic. Their connection leaped off the screen, it just seemed like they were in each other's skins. We reckon they defined the black and white era of Bollywood too, as they made some of the biggest classics together - Shree 420, Awaara, Chori Chori. Already two very talented performers, they improved each other - especially since powerful, fiery Nargis tempered Raj's tendencies for objectification. And they were equals - another very important aspect of all our favorite jodis.


Where can I watch this jodi in action? Awaara, Barsaat, Chori Chori, Shree 420

The Alt Indie Jodi
Naseeruddin Shah and Om Puri, "How do you like them apples?!"

The whole reason we started this blog, Naseeruddin Shah and Om Puri are probably the most recognizable and palatable jodi for the Western Bollywood virgin. With their naturalistic acting, and their tendency to appear in Western films as well, these two are most fun when they can just cavort together like the Statler & Waldorf of Hindi cinema, grumpily heckling the younger generation. Honestly, when our well-meaning and thoughtful Hindustani friends try again and again to tell us why Aamir Khan is really a great guy, blah blah, we just think of Naseer and Om cackling in the background. Because they are it - they are the real deal. Aamir Schmamir, Naseer and Om are the real progressives.

The best parts of the jodi can be found in their Parallel Cinema days, but there are also some Bollywood moments to be had. Magic jodi moments, off the top of our head:


Where can I watch this jodi in action? China Gate, Aakrosh, Maqbool, Sparsh, Arth, Shoot on Sight

The Official PPCC Jodi
Pran and the PPCC, "A match made in heaven"

It was love at first sight here at the PPCC when Pran made his debut on our television screen and in our hearts. Never again would we be able to review a film co-starring Pran in the same way, as his presence inevitably provoked such an intense burst of passionate affection that we usually can only write "PRAAAAAN!!!!!!!!!!!" and be done with it.

What is it about Pran that makes him so gosh-darned special and so golly-whiz lovable? Is it his characteristic delivery WHERE.EVERY.WORD.SOUNDS.LIKE.IT'S.OWN.SENTENCE!? Or is it his craggy, pirate-esque features? Is it the fact that he was apparently some sort of mathematical genius? Or is it all those fabulous character roles he played, where no masala treat would be complete without "...and PRAN!" in its title credits?

Whatever it was, we identify with Pran. We are like the Pran of the blogging world. When they make the masala madness meltdown movie of Bollywood bloggers, we want to be the Pran - perhaps a little ambiguous, a little shady, but distinct, quirky, memorable! Hero, schmero, GIVE US MORE PRAAAAAAN!!!!!!!!!


Where can I watch this jodi in action? Amar Akbar Anthony, Madhumati, Do Musafir, Don, Chori Chori, and our hearts
Posted by a ppcc representative at 00:00

I thought my Bollybuddy and I were the only ones who love Pran and his funky wigs. PRAAAAAAAANNNN indeed! And WIIIIIIIIIIIGS!

Yay for the naseer/om jodi- loved it since Ardh Satya :)

Can we have a Pran-a-thon when you come to DC?

My romantic side would have to include Hrithik/Aishwarya and Madhubala/Kishore Kumar to my list of favorite on-screen jodis!

Brian - Welcome! And you and your buddy are definitely not alone. DEFINITELY. Pran is my - my - PRAAAAAAANNN!!!!!!!!! (Btw, what a fab site you have!)

Shweta - Which I still haven't seen! Must remedy.

Filmi Girl - OMG YES WE ARE HAVING A PRANATHON. Can we also have an Anil-a-thon? In particular, I just ordered Pukar for pick-up - music by A.R. Rahman, Madhuri's mad dancing skills, and a "psycho for Anil" plot. I'm preemptively calling it a MAXIMUM WIN.

Though I think Pran would say: "Koi chance nahin."

you beat me to it ppcc! love the pyar for the shashitabh duo, they always look so bromantic together, and the anil-rani jodi is so cute and suggestive! Pukar is a great movie too and its got my fave faceoff scene between Madhuri and Danny Dezongpa!

Thanks, PPCC! A PRANathon would be PRANtastic. I was plotting a post on Naseeb anyway. Also, PRAAAAAAN!!!

I've never heard of Pran...now I've got to find out who he is!

I'm the same way with Shahrukh...every time I see a Farah-created dance or a film with him in it the magic begins again...

Anonymous - D'OH! You're right. I knew I was missing a major one.