Previously on the PPCC, we mentioned that Naseeruddin Shah is particularly adept at playing paternal figures who like to drink and cry a lot. We were so right.

Imagine that it's fifteen years after Masoom. Adulterous D.K. has now turned to the underworld and become a kingpin crime-boss named Raj who prays at the alter of Ganesh. Beautiful little Rahul has grown into a brooding, mullet-ed police officer, Jai (Ajay Devgan). They've all moved to Bombay, and Jai has no idea that the king of crime he seeks to defeat is actually - in an irony Shakespeare or George Lucas would have applauded - his father! (Obi-Wan never told you what happened to him, after all.)

Naajayaz isn't really the sequel to Masoom, though we like to pretend it is. Once again, Naseeruddin Shah plays an adulterous husband who learns that he has an illegitimate son. Once again, the son is adorable and perfect, and the son's presence will wreak havoc in Naseer's otherwise pleasant life. Except now by "wreak havoc" we actually mean people will get kidnapped and shot. And by "adulterous husband" we also mean "criminal lord". And by "pleasant life" we mean about as pleasant as a life of crime can be. So a little violent (beware, lots of jam). Add some Bollywood song-and-dance numbers, and voila! - you have Naajayaz, a highly entertaining film. 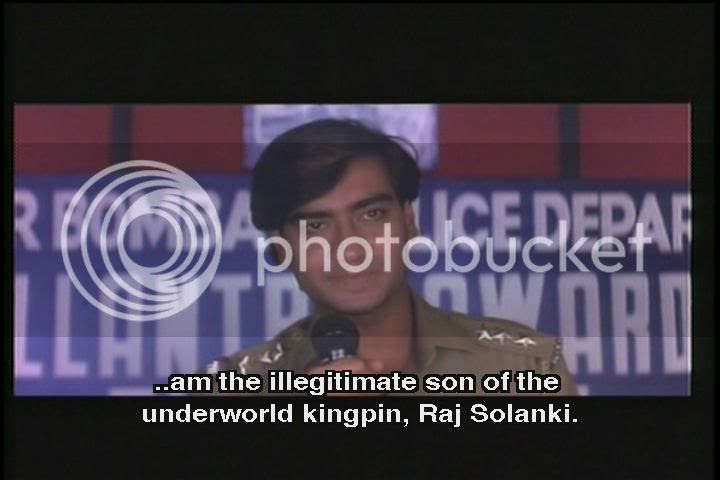 Maybe now's not the best time to come clean about paternity issues. 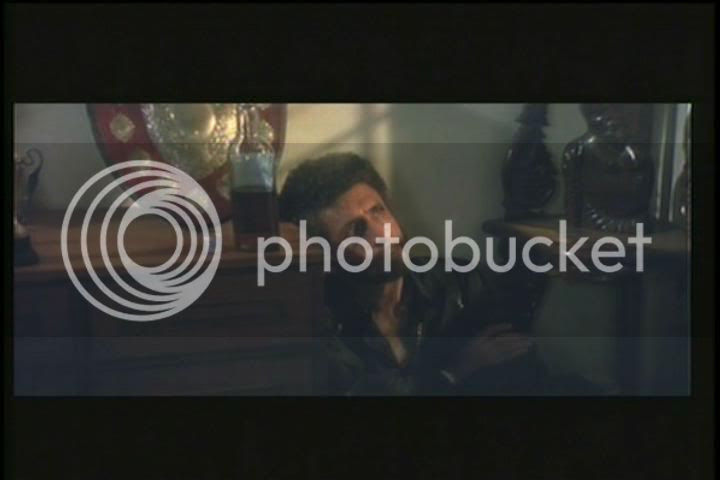 Naseer does this a lot.

The movie starts with some flashbacks interlaced with brooding Naseeruddin Shah shots. We learn that Naseer climbed the ranks of crime by hitting a lot of people on the head with a rock. But he's a victim too! His brother literally lost his tongue to vague gangster types, and his wife's honor was threatened. Life was hard.

Fast forward to the Present Day, and Naseer is now the Marlon Brando Figure presumably cutting other people's tongues out. He lives in a huge Bombay flat with his frail wife, whiny son, loyal mute brother, and an army of henchman. He wears gold chains. He is clearly a bad-ass in the vein of gobstopper candies or Paul Simon songs: hard on the outside, squishy on the inside. Life is a bit better, though still pretty tragic.

Enter an old flame. "Raj, you have another son and he's totally not into crime." He's a police officer, in fact! A police officer obsessed with bringing down the Raj Underworld Empire, indeed! (Raj Raj? Nyuk nyuk nyuk.) Oh NO. What will HAPPEN? 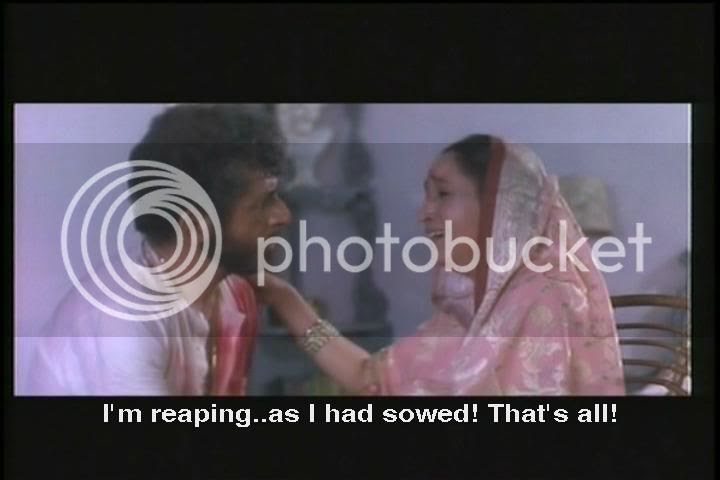 Dear, there's no need to be so dramatic. 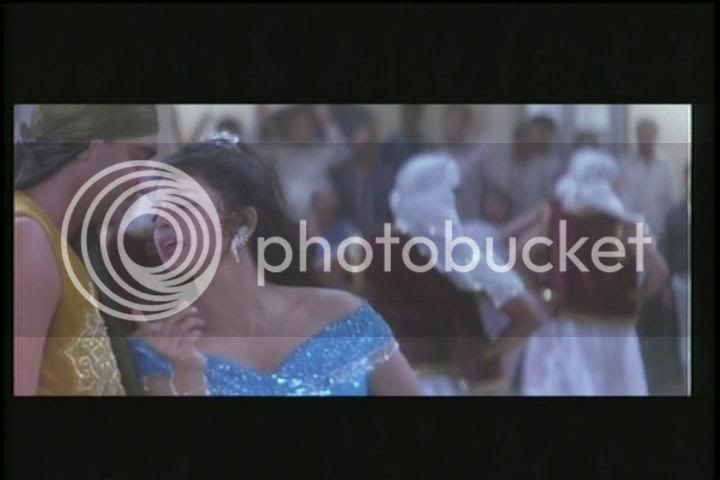 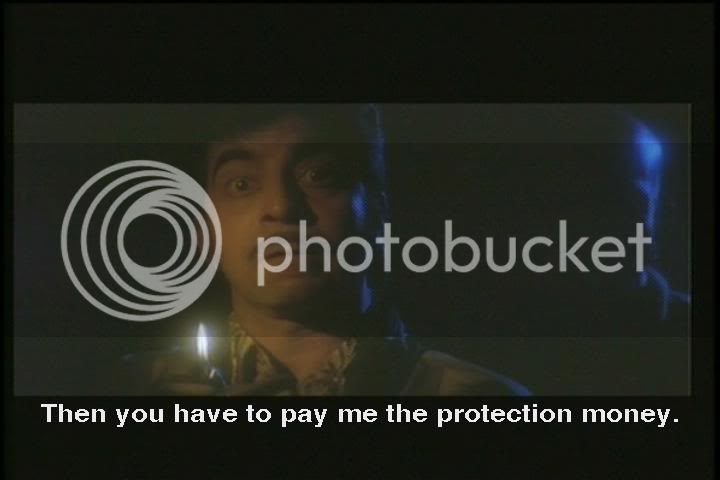 How it all began. And by "began" we mean "went horribly wrong".

Let's get one thing straight: melodrama can be good sometimes. The Aficionada is very careful about using the term, generally preferring to call something "melodramatic" only if it crossed the threshold of believability and just became silly. Naajayaz teeters precariously close to that threshold - one could say it hugs it; OK, makes out with it - but it never quite topples into the abyss. Yes, we laughed most of our way through the film, but we were also secretly bummed out for poor ol' Raj and his reign of Really Sad.

We like to think this is because of Naseer's uncanny actor skillz, but mayhap we are biased. Suffice to say he is excellent. There's a despairing fatalism to his Raj that makes everything take on that hint of Lear-like tragedy. Stop throwing yourself in front of the bullets, man. Choose life!

Ajay Devgan is highly enjoyable as well; he seems to have perfected the art of crying to the point where he can direct the trails of his tears. Young and soft as he is in this, it's a far cry from Gangaajal - but not too far. Indeed, one could consider Gangaajal the Return of the Jedi of this trilogy; with young Luke (Jai, Rahul)maturing into a grim, bad-ass Jedi master police inspector. You will return Captain Solo and the wookiee to me. 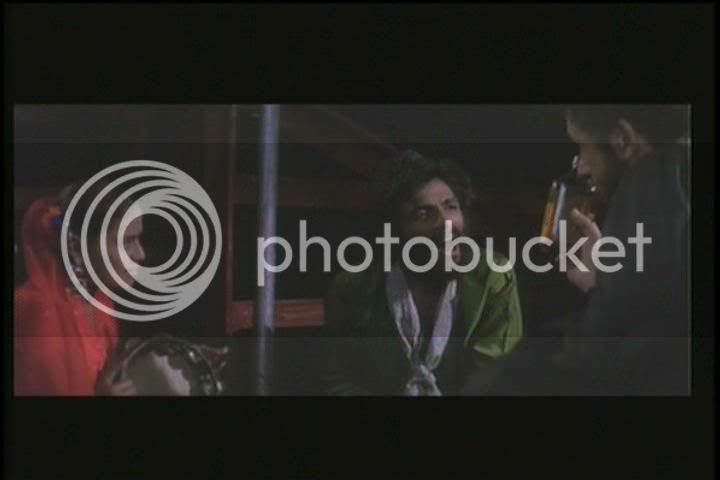 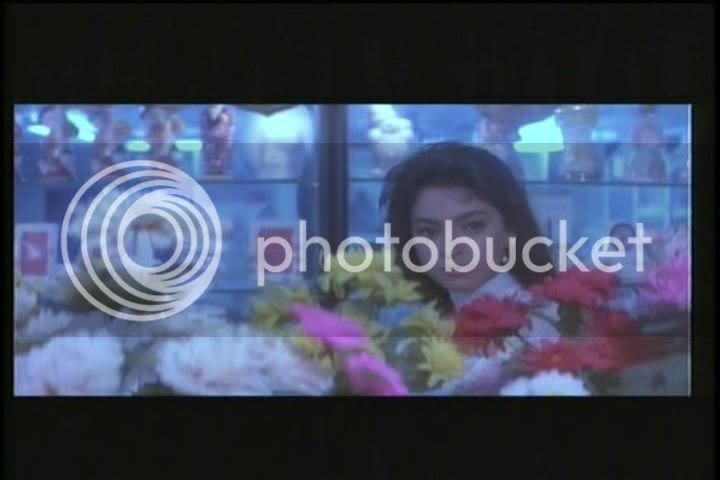 I am a pretty flower, la di dah.

As per Bollyusual, the film is long and everything that could be remotely interesting is squeezed out of the plot-idea. We dare not go into everything, but mention only that we also enjoyed all the various sub-subplots: the sneezy police chief, Ajay and his perky girlfriend as they frolic through forests, the middle-aged love triangle, Naseer's paradoxical religious devotion (like the Italian mob boss' Catholicism), and, of course, the mute and loyal bro. It was all very rich, very fun, and tinged with a satisfying sadness. All in all, a highly enjoyable movie. Why, if Naajayaz was a dessert, it would be a massive piece of ice cream cake!

Posted by a ppcc representative at 01:31