Since this is our inaugural Kurosawa review, we want to take a moment to sing the praises of Kurosawa's superstar, Toshiro Mifune. Tweeeee. Ahem.

Who were you, Toshiro-san? We'll never know, you hid so well inside the general, the ronin, the bandit. People say Gary Oldman is chameleon-like, but that guy relies mostly on gimmicks like makeup and funny accents. But you, Toshiro, you changed your very essence, you became the character, even if you were always, on the surface, the charming and gruff-voiced Toshiro Mifune. Oh, oh, Toshiro-san. We love you so-o-o much. 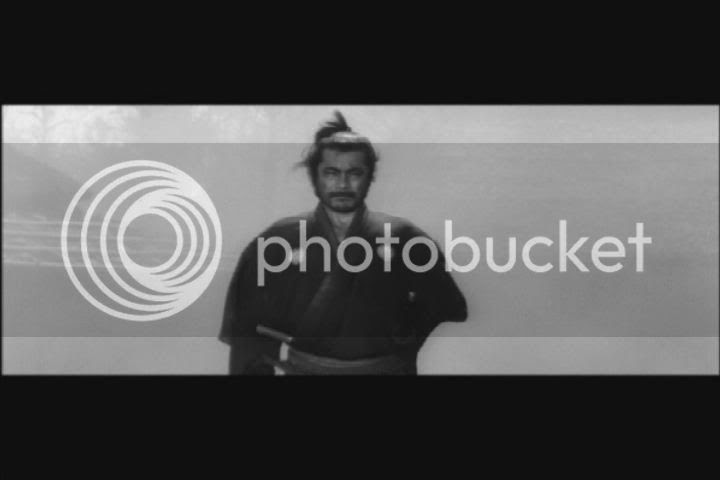 So. Yojimbo. Here is an example of West meets East meets West again, as Kurosawa was inspired by Hollywood Westerns to make this tale of a wandering ronin in a dusty town, and this tale then inspired that whole rootin' tootin' spaghetti Western genre of the 1960s. A Fistful of Dollars was a direct remake. 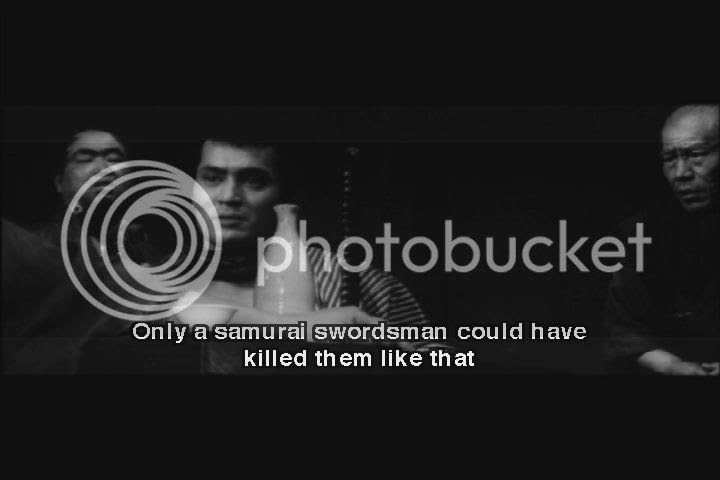 Yojimbo, literally bodyguard, tells the tale of Sanjuro, a bad-ass samurai who ambles along dusty roads until he finds violence to associate with. One day, he rolls on up to a boarded-up town wherein a dog greets him with a dismembered hand in its mouth. Sanjuro's first thought: Cha-ching! There is money to be made here, oh yes, there are limbs to be separated from their bodies! The town, embroiled in an incestuous turf war between competing gangs, is a warzone, and - in Sanjuro's eyes - a goldmine. He embarks on a failsafe plan: step one, open a can o' whoop-ass in the town square, in sight of the two rival gangleaders. Step two, let the gangleaders bid up their price as they vie to get you on their side. Step three, constantly betray them. Step four, risk life in order to reunite a family who was caught in the crossfire. Step five, get caught helping them and get promptly beat on. Step - wait, what?! 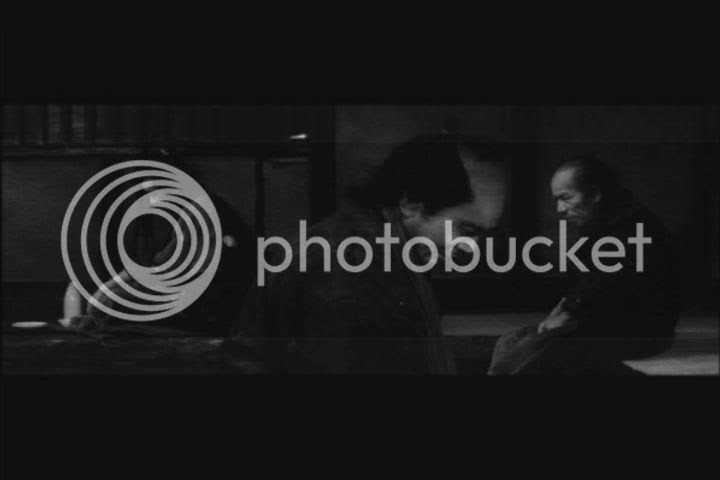 It's so easy to cap Kurosawa. Look at that imagery! 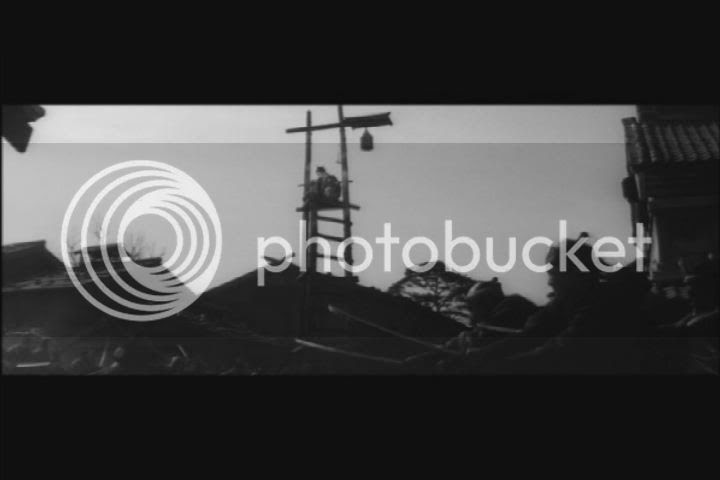 Sanjuro from above: dance, my puppets!

Yes, it's all smokey machismo and black comedy until Sanjuro lets his squishy heart get the better of him. Then wa-bam, things get serious. And once again I am astounded that this sort of violence gets past 1960s censors. Maybe it's the black and white which hides the fact that they're faces are smeared in jam, but Kurosawa has always shocked me a bit with his violence. (Most particularly in Red Beard when Toshiro opens a(nother) can o' whoop ass on some punk-ass punks. Bones protrude! My God.) So some shocking violence aside, we then have the showdown, complete with tumbleweeds and distant dogs barking. 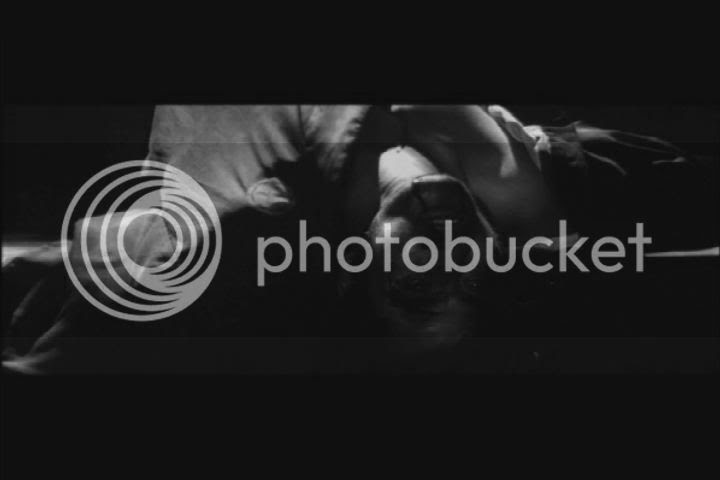 My face is covered in jam! 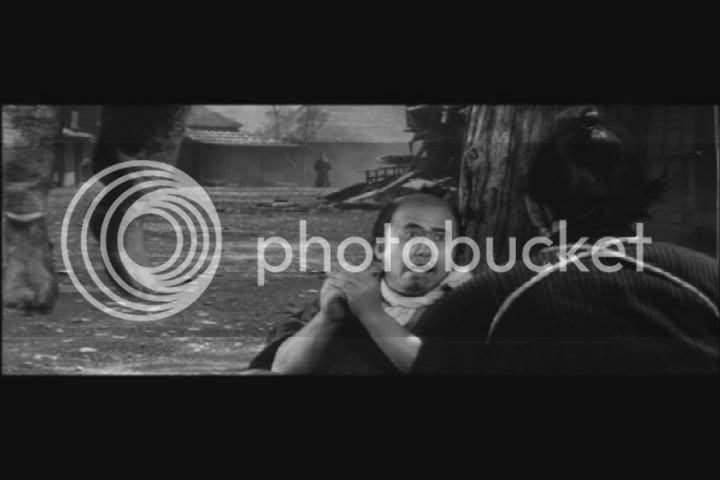 Yojimbo is typical Kurosawa. Once again, we're in a town somewhere in rural Japan, where a colorful cast of characters fusses around Toshiro Mifune's brooding coolness. Limbs are lost, swords go shi-ing!, and there are moments of the Soft and Delicate. Once again, Toshiro is the man who breaks all rules, and Japanese tradition and nobility crack under the pressure of his cynical pragmatism.

The soundtrack is great: all jazzy brass band riffs to accompany Sanjuro as he walks down the street. Toshiro is, as he cannot fail to be, totally awesome. He creates Sanjuro in all the physical details: the way he pulls his hands into his robe to scratch his chest, his compulsively twitching shoulders, the way he runs (I like the way he runs). He roars and barks and is very, very compelling. Meanwhile, the supporting cast flesh it all out: Daisuke Kato is particularly hilarious as the bucktoothed, unibrowed, rolly-polly thug. Takashi Shimura, who was another Kurosawa favorite, pops up in an oddly small role as Takuemon, one of the brewers. Yeah, I see Pokemon when I read that too.

Of the Kurosawa movies we've seen here at the PPCC, Yojimbo is definitely enjoyable and certainly a good introduction to the Kurosawa Genre. The sequel, Sanjuro, is a bit better at fleshing out Mr. Sanjuro himself, though a little less razzle-dazzle. (If you seek instead more thoughtful fare, we would point you in the direction of Rashomon.) For those of us that like our Westerns without any gross cowboy boots and acoustic twang, Yojimbo is the way to go. 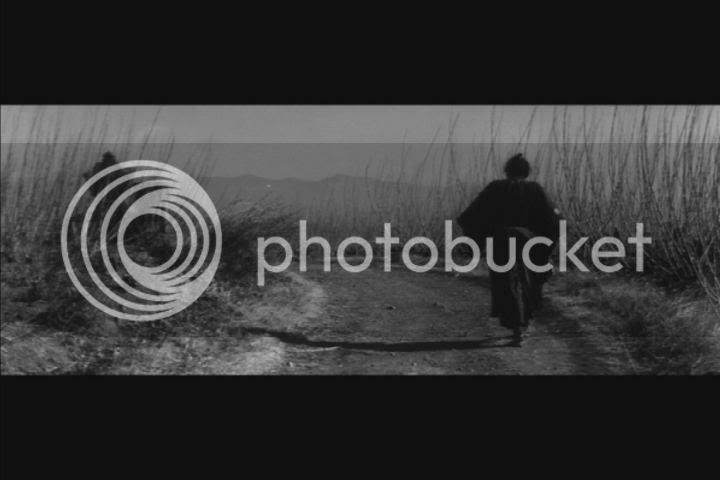 Let me just say that I love your reviews and the way you describe and adore Toshiro Mifune. I've never read such enjoyable reviews of his films! Cheers to the greatest actor, ever!