What Kal Ho Naa Ho (Tomorrow May Not Be) lacks in subtlety or believability, it makes up in charm and emotional gimmicks. This fun and indulgent film is quick on its feet and shamelessly manipulative. In the end, you may cry - but you may also feel a bit cheated. Whereas director Karan Johar's later venture, Kabhi Alvida Naa Kehna, was emotionally overblown but with an ultimately believable core, KHNH is sugar-covered fluff.


One of the big songs.

It comes complete with all the usual trappings of a Shah Rukh Khan/Karan Johar venture: super-pop dance sequences in unlikely night clubs featuring uninspired music, ample tears, emotional triangles and quadrangles and pentagons, many very famous Bollywood stars, New York City, and a Punjabi wedding. It also, like KANK, seems more geared towards the diaspora audience - this is another movie well-integrated into a multicultural, modern New York City, where the romantic ballads may just as easily feature multiracial or same sex pairings as the Desi hero-heroine.

The plot of Kal Ho Naa Ho is pure deep-fried Mars bar, yet - as with many mainstream Bollywood emo fests - it does contain a sincerity of heart which renders it appealing rather that torturous.

The setting is New York City. 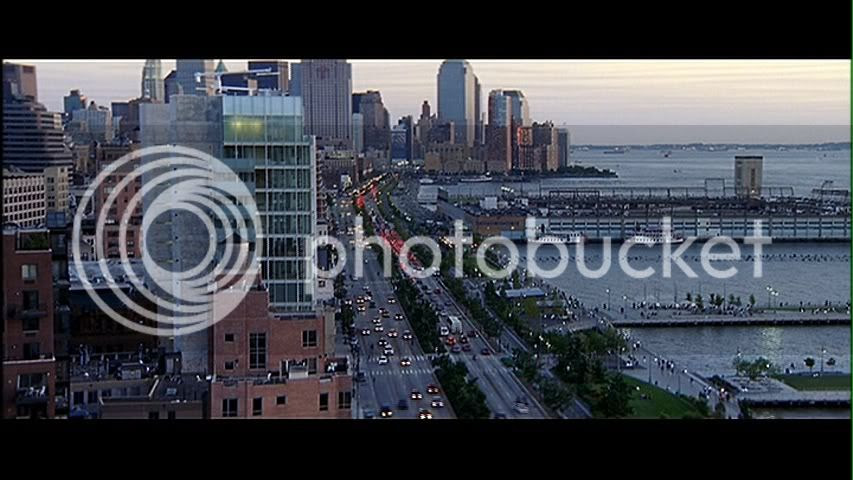 Bookish Naina (Preity Zinta) lives in a high-stress environment. Her mother (Jaya Bachchan) is constantly fighting with her paternal grandmother. Her younger brother is disabled. Her younger sister is adopted, and despised by the grandmother. Her father killed himself. There is religious dischord. It would really make anyone a bit upset. 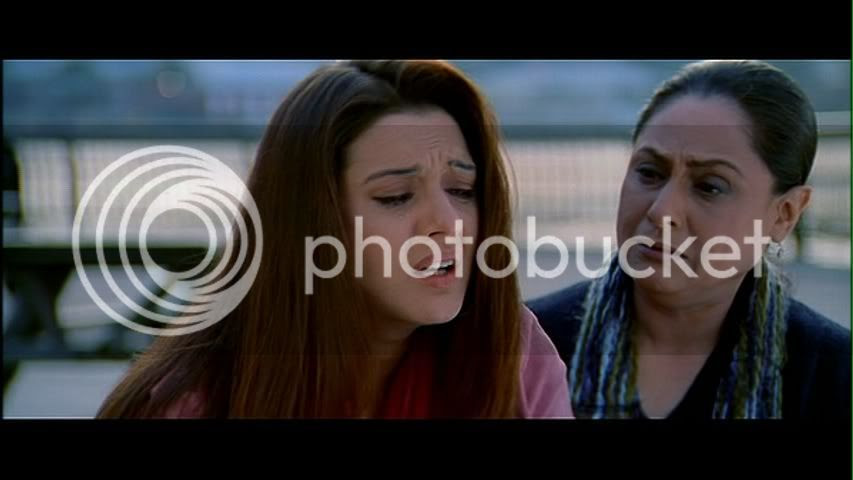 Naina and her mother and the ever-present tears.

Things look grim, and one night, after a particularly nasty fight with the grandma, the rest of the family gets on their knees and begs God to send an angel who can save them from this mess. With no narrative shame, a sunny neighbor, Aman (Shah Rukh Khan), moves in before the prayer is even finished. 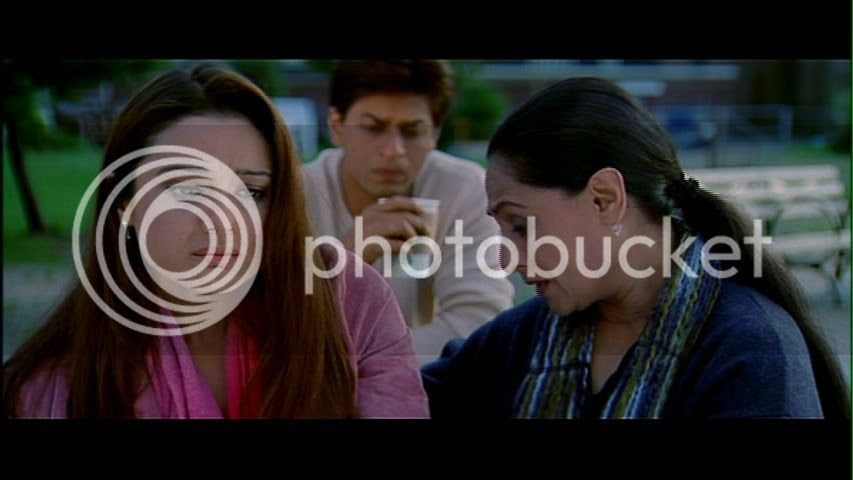 Aman takes it upon himself to improve Naina's situation. He teaches her to smile again. He sings in the street. He cooks. He even reconciles their familial troubles. Everyone is taken in by his charms. 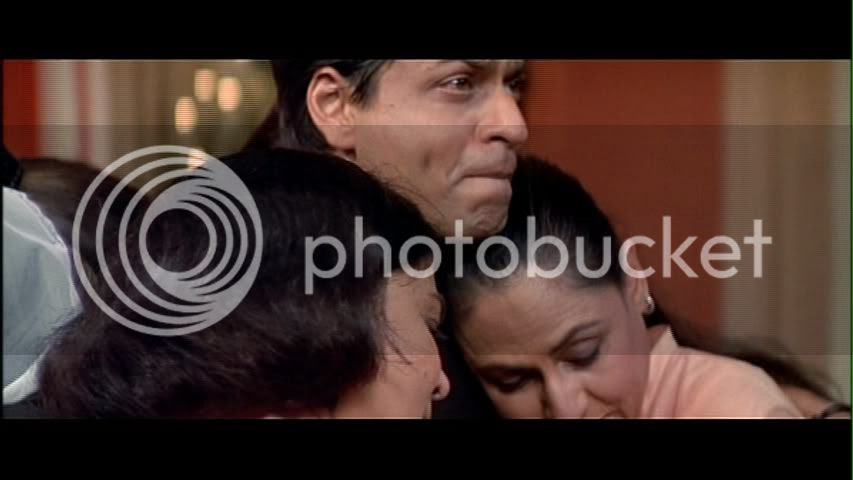 Reconciling other people's problems, no problem.

It's not long before Naina falls in love with this ray of sunshine. But Aman knows he can't let himself love her, and we are left with only ambiguous hints as to why. Everything is very vague until the pre-intermission scene, where a tearful Aman declares to his mother (Naseeruddin Shah's ex-lover from Naajayaz!) and, helpfully, to us, the audience, that he doesn't have long to live. But he can't tell Naina this, as it will crush her. 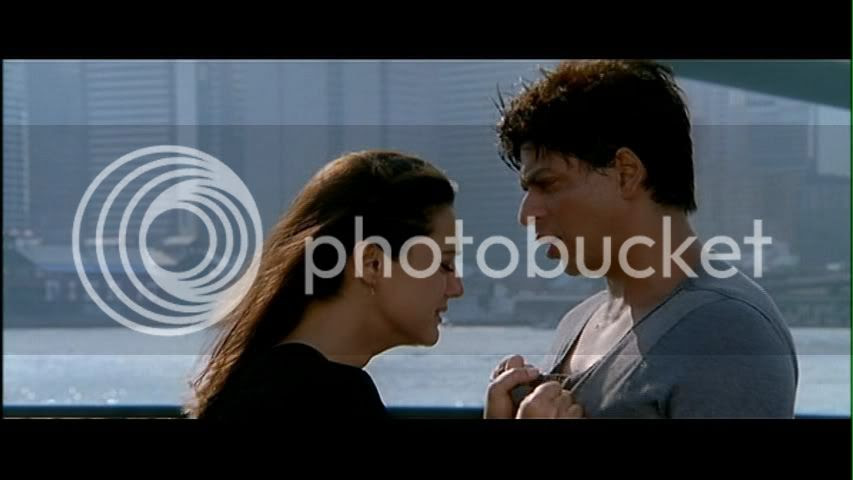 He can, however, cry.

Instead, Aman is a generous soul and thus works to get Naina together with her best friend, Rohit (Saif Ali Khan), who presumably has a longer lifespan. Rohit has been in love with Naina for a while, but is romantically inept. In a series of wonderful scenes, Aman and Rohit conspire to get the girl. But everything resonates with that bittersweet core, as every success for Rohit is an arrow to Aman's fragile heart. 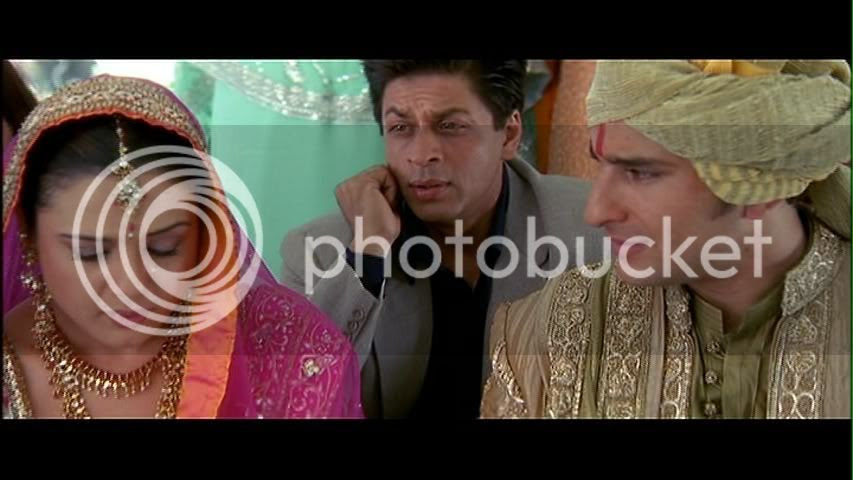 Eventually, the boys succeed (with some emotional ambiguity on Naina's part, but the movie doesn't worry too much about what she thinks - it's a surprisingly passive role for Preity Zinta!) in seducing Naina, and Rohit and Naina marry. There is bhangra music, and a fun Punjabi-Gujarati cultural clash. Saint Aman cannot hide his tears; he is human, after all. 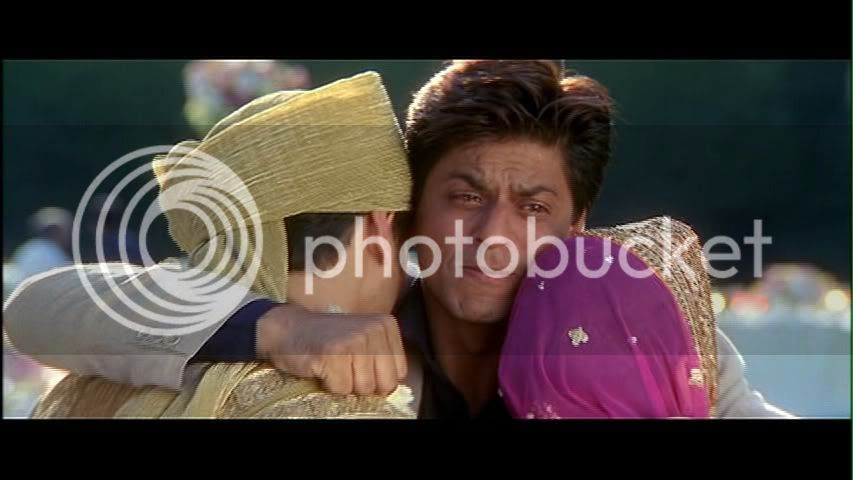 Because the true lovers of this film are the doomed Naina and Aman, who cannot even touch (let alone nuzzle on any piers!). So Rohit will just have to do, what with him having the longer longevity and all. That he is Naina's friend and a genuinely Nice Guy is a plus, making the match tolerable and the film sweet, rather than ubertragic. As the film winds down with the inevitable bedside hospital scenes, everyone weeps over Aman's pale form, and then, in a moment of privacy between Aman and Rohit, we have the best lines of dialogue:


Aman: Rohit, Naina is yours in this life. But in every life after this, in every birth, she will be mine. Promise me. Promise me.
Rohit: I promise. 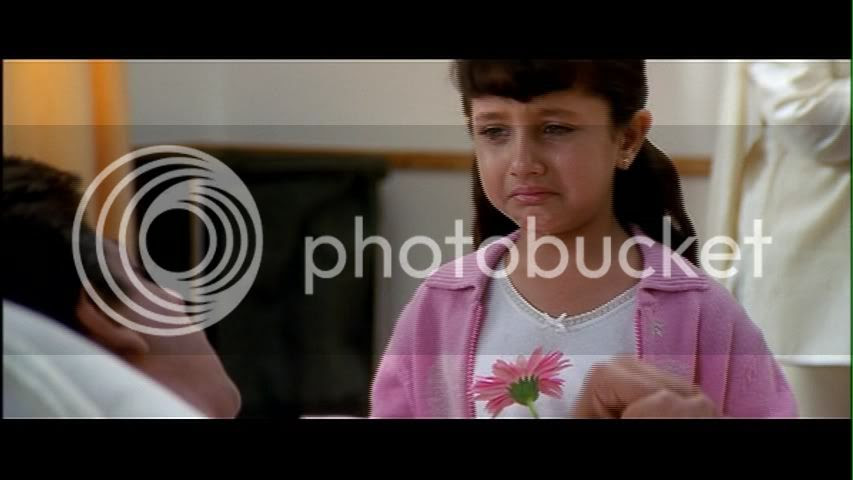 OK, we gave it all away, but so what? The fun of Kal Ho Naa Ho certainly isn't in the plot, it's in the fast takes, the divided screens, and Bollywood self-references (including a wonderful one to Devdas's Maar Daala). There are some moments with troubling undercurrents, such as the scene where Aman teaches Naina's family that the only way their restaurant business can thrive is if they give up their half-hearted integration into American culture and turn the restaurant into a super-Indian restaurant instead. Only then will they be able to compete with the Chinese restauranteurs across the street (to whom they often shake their fists). While we're all about preserving cultures, this just seem to be handled somewhat bluntly and simple-mindedly. Similarly, Aman, who is presumably very emotionally intelligent, rejects Naina with all the sensitivity of a jack-ass.


A sweet song between Rohit and Naina, dancing through the streets of New York.

There were some good gags, however, such as the series of scenes between Rohit and Aman wherein Rohit's maid, Kantaben, becomes convinced that they're having a gay affair. Aman cheerfully plays along, with one of the best scenes being his enraged, "Kanta! I will die before I let Rohit go out with another girl!"


We love the music that accompanies her scenes: "Heee-eee-eeeey Kantaben!"

The acting is predictable for a post-2000 Shah Rukh, a little disappointing for Preity Zinta (probably because she's playing such a passive character this time around and we like our Preity as a strong, independent woman!), and surprisingly appealing for Saif Ali Khan. But Saif already impressed us very much so in the Othello adaptation, Omkara, where he played the Iago character with much intelligence and sneering malice. Comparing his role in this and his role in that shows that he has quite a wide range. And yes, he can dance, too. Huzzah!

Posted by a ppcc representative at 15:18

This film would have worked for me except for one BIG thing.. I don't get why Aman must love Naina that much. Is it because he's dying that he seizes the most likable girl on the block for him to pour his generosity on? Would he even looked at her twice had he still been the hale & hearty happy-go-lucky guy who confesses to never falling in love before? I don't think so. Or maybe I'm just being my regular hardass cynic self.

Love Shah Rukh's Aman tho..not difficult AT ALL to see how Naina can love him so much that she'd marry someone he chooses for her on his deathbed (regardless of her wishes).