A friend warned us not to watch Chor Machaye Shor. Sure, it's got a legendary song (Le Jayenge... reprised and expanded into the excellent Dilwale Dulhania Le Jayenge) for which Shashi unfortunately but justifiably lost the Dance Off (!!), but one good song does not a good film make. Nonetheless, we bought it because 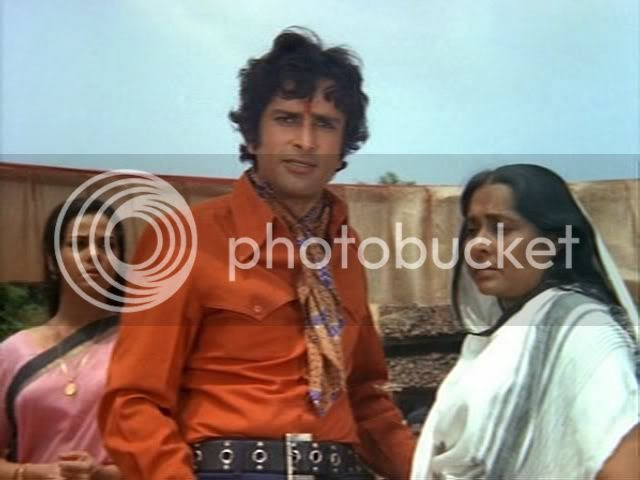 Shashi's beauty makes us pursue him into stupid movies. Check out the eyeliner? And check out that neckerchief. *melt melt*

We're happy we did (hey, it was cheap), though it's true that Chor Machaye Shor is no Sholay, nor no Zanjeer, nor no Mandi, though it tries to be all of these films. (Yes, we realize that Sholay and Mandi actually came after Chor Machaye Shor. That's what's so weird!) It is an altogether bizarre Hindi movie experience. Why is it bizarre, the PPCC readership asks? Well, we'll tell you. In bullet points.

OK, maybe the wording is a bit strong. But it's true. Talk about playing against type! In Chor Machaye Shor, Shashi is evil. He's aggressive. He's angry. He is everything we've never seen him be before. He yells a lot. He sneers. At one point, he angrily declares he's going to rape his girlfriend and gets very close to doing it (leaving the PPCC considerably disturbed!). Rarely does he turn on his Super Smile. Rarely does he look bashful. In fact, the only time we get these two Trademark Shashi Moves, he's actually faking it. This is an angry, embittered, sinister Shashi - more like Amitabh's Angry Young Man, except more bourgeoise (OK, that's pretty standard Shashi) and much more scary (the attempted rape scene?!!). 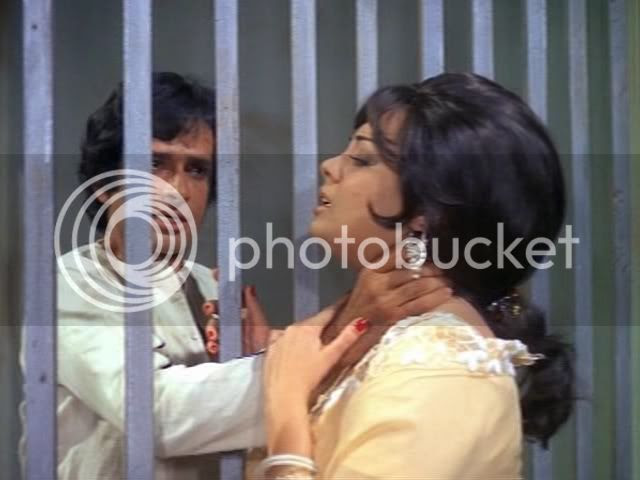 Oh yeah, he also chokes her at one point. 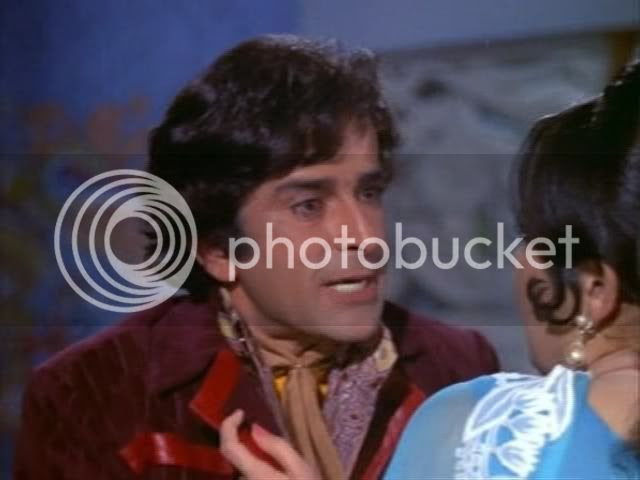 The rape scene. WTF IS GOING ON?! SHASHEEEEE. (Side note but his outfit is great.) 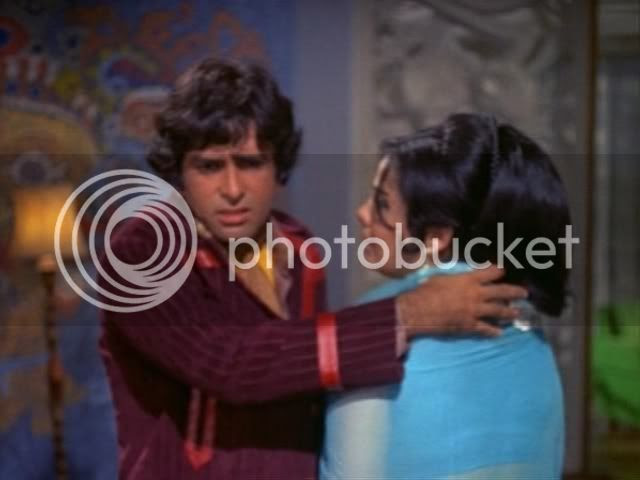 Thankfully he soon comes back to his senses and helps her put her clothes back on. Honestly. For the love of God.

2. The narrative is kind of nonlinear.

Wonder of wonders! A 1970s Bollywood movie without a prologue! No children abandoned by parents! No long-lost brothers! Never have we seen a mainstream Hindi film told in such a way: with a smackdown opening scene (immediately after the censor board blurb, before the credits, Shashi yelling, "Yeh jhoot hai! Jhoot hai!" ("It's a lie! A lie!") GASP) and then flashback interjections moving in parallel to the present day plotline. There's even minimal exposition (well, compared to the standard). Just incredible. 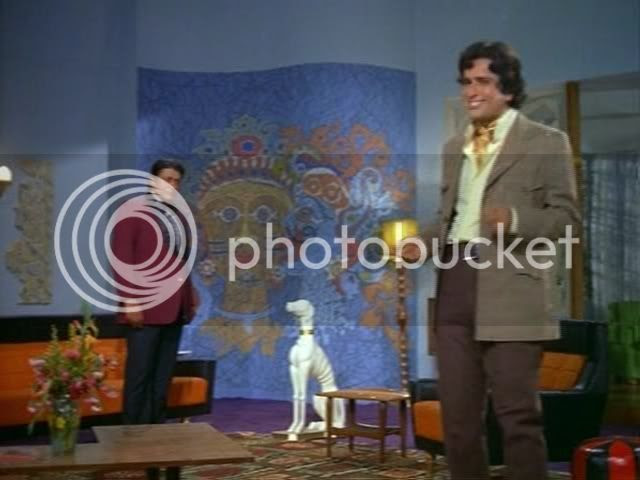 Anyone keen on a little Gustav Klimt? Eh? Eh?

And thanks to this bizarreness, the PPCC Committee was left afloat in a sea of unknowingness. Usually we can predict these things scene by scene (Amitabh will discover Nirupa Roy's his mother... now), yet we had no idea what would happen next here. That was nice. Also a little scary. 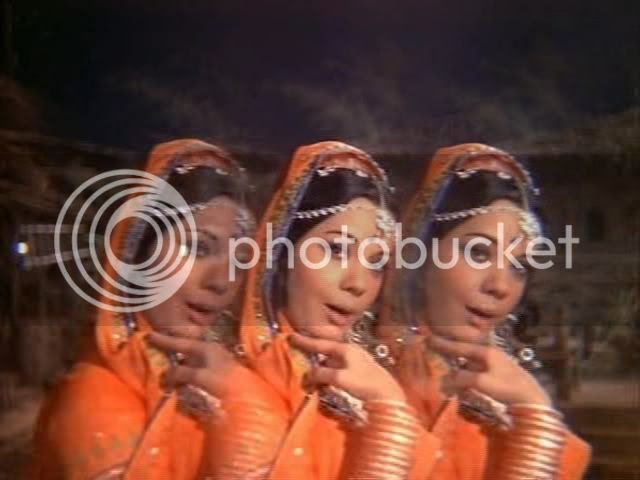 A little too much bhang, perhaps?

The corrupt politician from Fakira is back, still all dressed up like Pandit Jawarlahal Nehru in what we at the PPCC assume is standard Congress Party uniform: Gandhi cap, Nehru jacket, tunic and trousers. There's further satire of a corrupt Congress Party (we wonder if this was made in Emergency India): social workers descending on a village (didn't Nehru envision a utopian "village republic" for India? Where'd we read that?), actually hand in hand with the local dacoit. A dacoit who is named Rupa Singh... just like Gabbar Singh from Sholay. Wait, wasn't this a political satire? OK, apparently it's also an extended reference to Sholay, wherein some gold-hearted cons (Shashi and Danny Denzongpa replacing Amitabh and Dharmendra) teach a village how to defend itself while also engaging in some sustainable development on the water management front. Kind of like Swades meets The Seven Samurai-via-Sholay. But still with that Congress Party stuff. Huh? 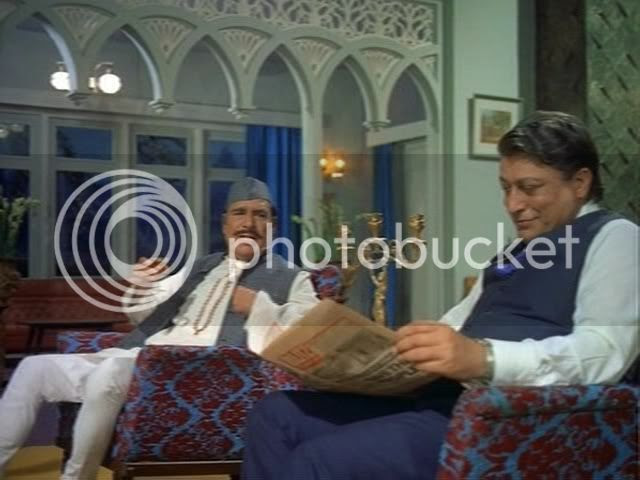 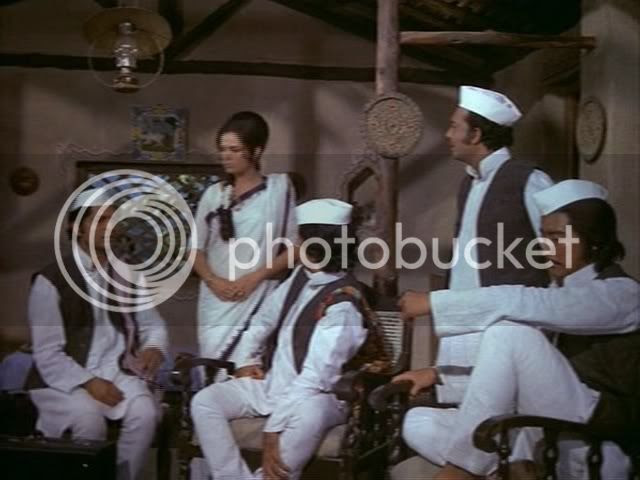 Yeah. OK, it's really quite bizarre. But what we imagined was the point of the film (Shashi being framed for attempted rape, and then being imprisoned) is actually resolved within the first thirty minutes (Shashi escapes with his newfound prison buds and then actually does attempt to rape his girlfriend) so that the plot can make room for the whole above-mentioned political-cum-Kurosawa satire/parody. 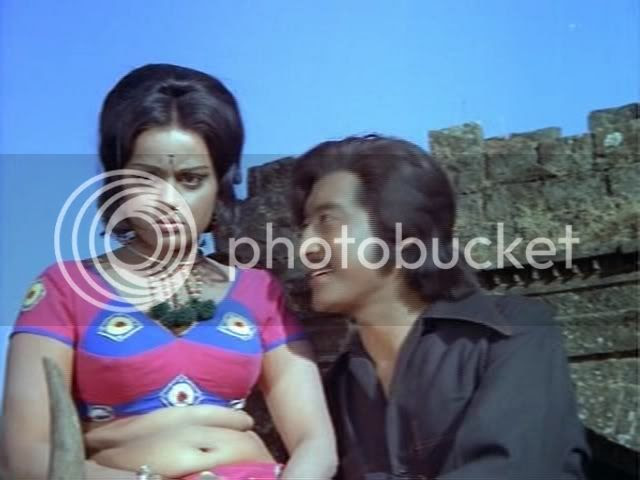 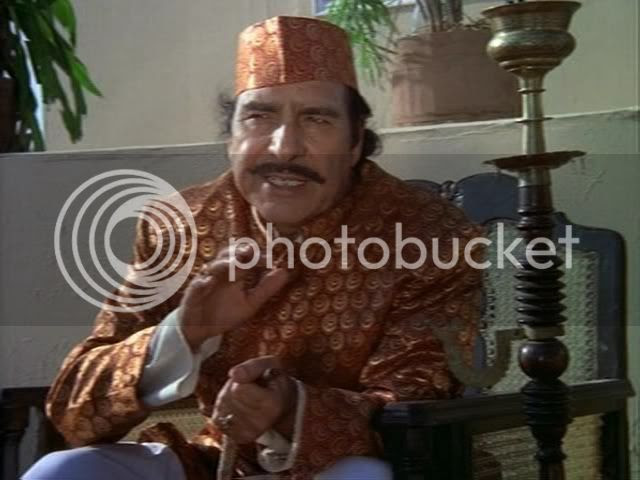 Now that is one nice outfit.

Even more oddly, there are only a few songs in the film. Two of which are really, really good: Le Jayenge, as we've mentioned, went on to become a classic that is still sung at Hindustani weddings around the world (!) and Ghungroo Ki Tarah, which is a bit like that one song in Joseph and the Amazing Technicolor Dreamcoat (in terms of context, not melody) and is just gooorgeous. Shashi even does that thing when he smiles ruefully and lazily closes and opens his eyes and wobbles his head a little to indicate rueful sadness. Have we been over-studying our beloved movie icon? WHATEVER, READER, WHATEVER.

Le Jayenge. This song has grown on us exponentially. We especially love the part when they promise to visit the in-laws, and everyone prostrates themselves on the floor. It's such a cheeky song!


Ghunguroo ki tarah. Bizarrely gorgeous melody, with Shashi's hotness approaching the heat of the sun. But what is this song doing in such a silly movie?

The bottom line is that we would recommend this for Shashi lovers only, and even then, we'd have to add a cautious disclaimer: this is a Shashi who is strangely missing his Shashi.
Posted by a ppcc representative at 02:53

He may be without his Shashi, but he has a porcelain statue of an emaciated greyhound!

We should make a list of "Shashi does that thing where...." Can you imagine the joy and drooling that would elicit? Mine is when he's wrapped up in (or falling into) the lovely fuzzy intimacy of a moment with some lucky girl and his voice goes growly. This is demonstrated best in Sharmeelee when he tells Kanchan she's his sangeeeeeeet.

re: eyeliner: Have you noticed that no one can rock eyeliner like a Kapoor? Even Shammi can pull it off, but Kareena is the best, I think. There's a scene in 36 China Town that convinces me that millennia of kohl technology were all to lead to that one moment.

Anyway I have to see this, obviously. If the Indian grocery store doesn't have it, I'm buying it. I told myself no more purchases until I watch all ten of my unwatched things, but that was made before I saw how Shashilicious and weird this is.

Oh my God, the growly voice, yes, I know EXACTLY what you mean and I covet it too. I believe the PPCC has commented on it as well several times. Gush! The voice!

I think your list idea is a good one. And we can have subheadings where we catalog every time the Trademark Move is used.

Off the top of my head, in Kabhi Kabhie, when Jaya tells him that surely he must be angry and he just smiles and goes, Pooojaaaaa.

Or all of Silsila, which I recently re-watched the other night. But especially when Jaya (well, again) asks who this Amit guy is and Shashi smiles and goes, Mere bhaaaai hai.

Good Lord this movie tripped me out when I saw it on video at the tender age of 14 - being a big Shashi fan maybe it is worth a re-watching.

But the 2 songs are just absolute classics for the reasons you mention. Just try - really try - not to start dancing with shoulders moving to 'Lejayange Lejayange' when it starts playing (and we had it play at our wedding too:) And 'Ghunghroo Ki Tarah' is just a heartbreaking tune. The range of Kishore Kumar (from happy to sad) in these 2 songs just exemplifies why he is my favorite singer of all time.