The other day, the PPCC Committee was sitting in the car, thinking about a particular feeling one gets. You know that feeling of delight at something humorous, something that doesn't quite make you laugh or even smile, but fills you with a bright shiny thing that's inexpressible? Like when someone does something nice and thoughtful for you, or when someone makes a clever reference to something that only you pick up on, and you can't really do anything but bask in the inner glow, because explaining it would take too long and then the glow would be gone anyway? Surely the PPCC is not the only Committee to feel such feelings.

Well, while we were in the car, and we were thinking about how to express this feeling, we started looking for examples. At the time, we couldn't find any. But then we watched Pyar Ka Mausam, and now we have a lot.

Pyar Ka Mausam (The Season of Love) has many moments which fill us with this happy light. It's not really funny, though we did laugh at some points, nor is it a particularly amazing film (we ended up playing Sudoku in the non-Shashi scenes and fastforwarding through the songs during the end, we were that unengaged). But there were some things that just made us glow in that internal way, like a lightbug. We will now list them, just to ruin it for you. Ha ha. 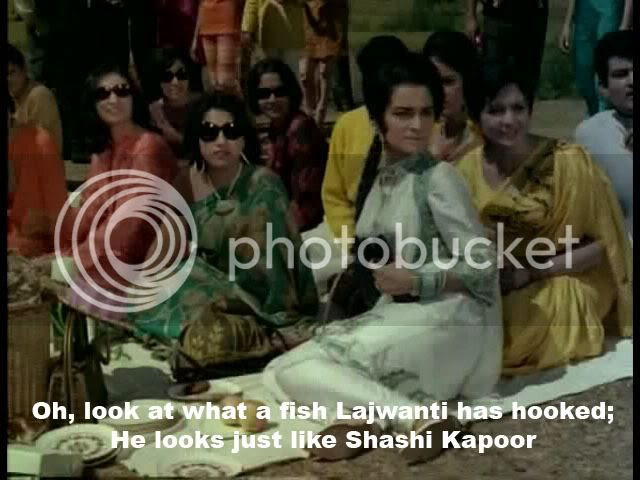 This is what the subtitles said. Self-references make us happy. 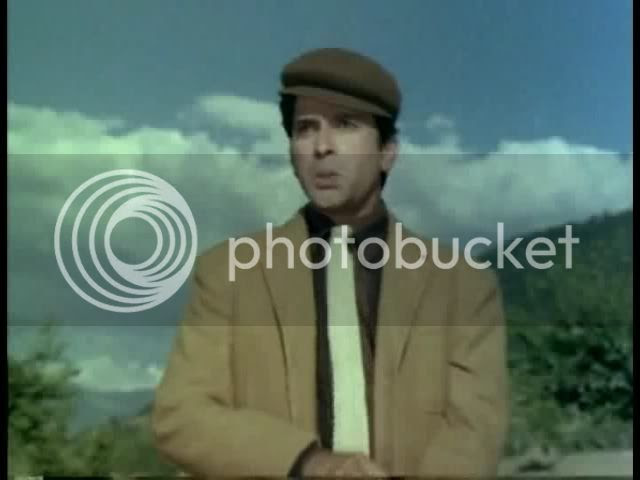 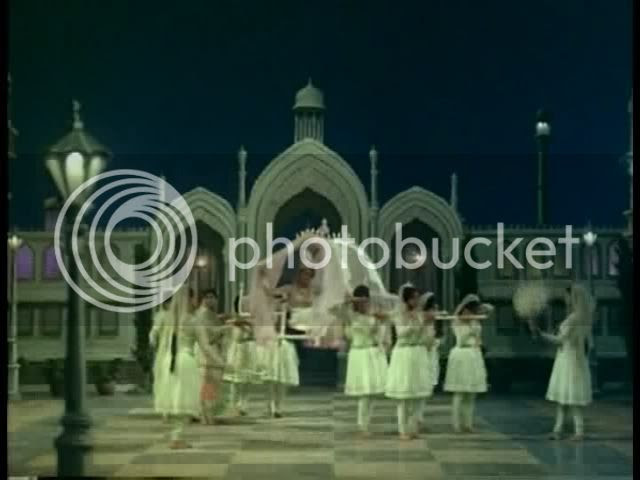 Play-within-a-film.
Yet despite all this, Pyar Ka Mausam left us generally cold. And Shashi looked a little stupid with the short hair and puffy inside tie thing (though we did like the tapered trousers). Especially after he learns who his father is. Too much conditioner, people. All the villains were also very tiresome, so much so that we ended up fastforwarding through their scenes entirely. Apart from seeing a young Iftikhar again (the man is in everything!), we were barely roused from our lethargic non-interest. Perhaps Jab Jab Phool Khile, which came in the same DVD, will be better (though Beth is making us think it'll offend our post-feminist sensibilities) Editor from the Future Note: It did. Or maybe we just prefer the 1970s Shashi, so much more earthy and more in tune with his croaky-sexy voice. A young Shashi hardly squeaked at all. In fact, several scenes were just slightly sped up (God knows why), ruining the Voice altogether. And then there were the fat jokes. Come now! Though we did like the Sydney Greenstreet-esque sidekick in a fez.
Best song. Tum bhin jao kahan. 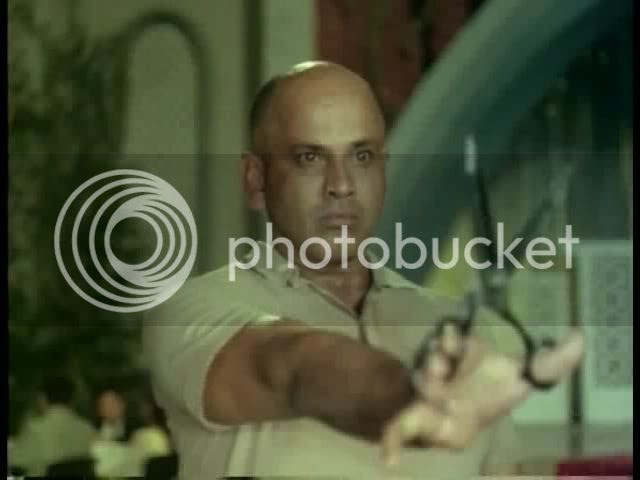 Look who turns up from the Don Alumni! 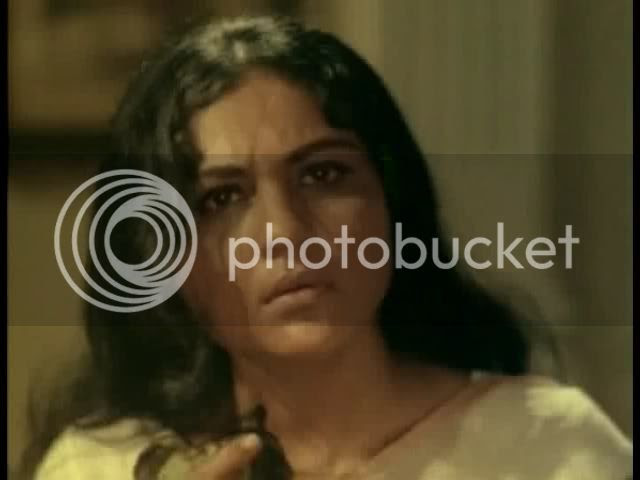 Nirupa Roy, playing against type as a crazy long-suffering mom instead of just a long-suffering mom.
You might be wondering what the hell kind of review this is. Where's the plot summary? What about the other actors? Bah. We can't be bothered. The plot was the usual. Missing children, Hindi irony, intergenerational villains, blah blah. Things catch fire at the end, that was pretty interesting. One of the songs, Tum Bhin Kahan, was also quite sweet. (And we liked the soft focused, "I love you. Honest." which followed!) Generally, the music seemed to be missing a melody though. Many of the songs were only percussion and voice; it was a bit bare bones. 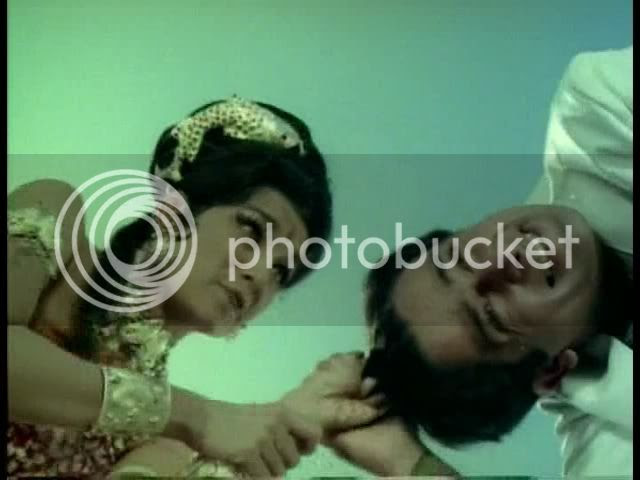 FOR THE LOVE OF GOD NOT THE HAIR! 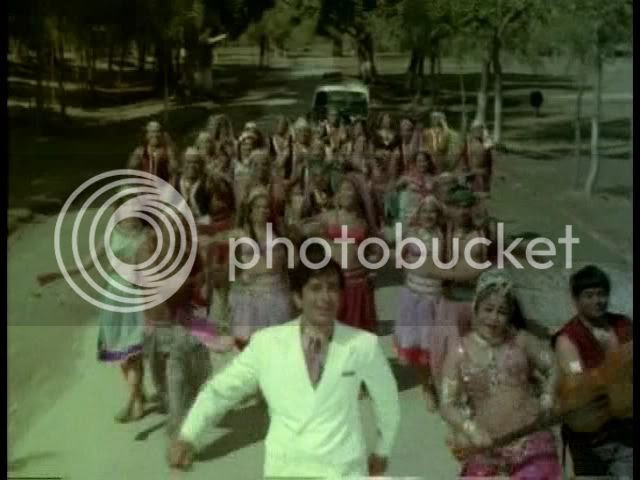 The gypsy parade.
Yeah. The whole thing was a bit like Shashi's hat: plopped on top of the head at a jaunty angle, but still very stiff.
Posted by a ppcc representative at 02:54

Yes, but if you had the opportunity of getting a handful of those lovely curls, wouldn't you take it? And hope that someone had photographic evidence?

Every time I read your site I discover something else I wish I'd thought of. In this case it is the Editor from the Future, for whom I was wishing just today itself without even realizing it - for lo! I did not yet have the words to name her/him as such. (The Editor from the Future should stop me from writing long-winded posts about movies that I already wrote long-winded posts about less than two weeks ago. But as the nineteenth-century hymn would say, how can I keep from posting?)

I too prefer later Shashi with his voice (please note that I had not read this post when we were talking about his voice yesterday, or else I would have referred to your description) and more curls. As I watched Jhoom Barabar Jhoom the other day I wondered if perhaps there would be such a thing as too much of Shashi curls - because there is certainly too much of Bobby Deol curls. But Shashi's are so...mmmrrrwl, which is to say, perfect.

PS You realize of course that I am desperate for your email address, no matter what amount of PPCC Committee paperwork I must fill out in triplicate and no matter what level of identity protection is necessary. For how else are we to Concoct Shashi-Related Plans? We could even do Useful and Educational Things liked come up with a whole series of Teach Yourself Hindi-esque exercises based on Shashi! Especially for chapter four.