For however superficially similar Chori Mera Kaam (Stealing Is My Job) may be to our recently reviewed Chor Sipahee - both star a proletarian Shashi Kapoor, talk about criminality, and feature 'chor' in the title - there is a fundamental difference between the two films. The latter is primarily existential, a real bummer - a beautiful bummer - but a bummer nonetheless. The former is instead a fun frolic through the lives of a pair of lawless Bonnie and Clyde, Bunty aur Babli type characters. Also, the films feature two distinct versions of Shashi's Proletarian Man: in Chor Sipahee, he is weighed down by the sins of the world and has a beard; in Chori Mera Kaam, he is fun-loving, carefree, clean-shaven and bouncy like a muppet. 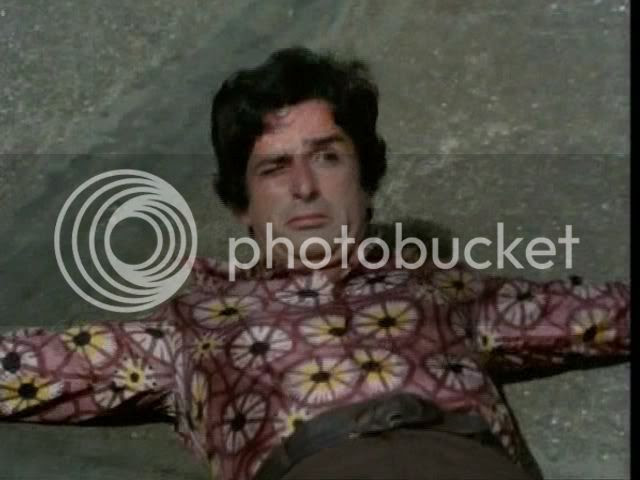 There's a prologue, but we'll ignore it, since it adds nothing interesting or new to the plot and seems to have been included sheerly because it was such a familiar device of 1970s Bollywood. The only important thing to remember is that Pran the Policeman is Shashi's dad, and that's cool, because Pran is cool. 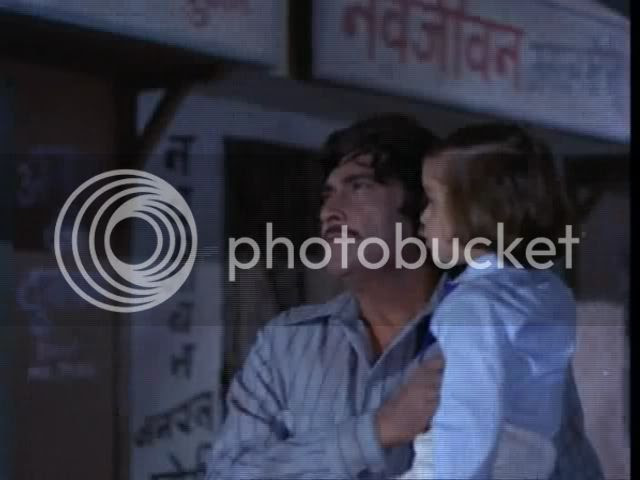 Shankar (Ashok Kumar) and that awful child actress from Mukti who was in far too many of these unnecessary prologues. Ugh. 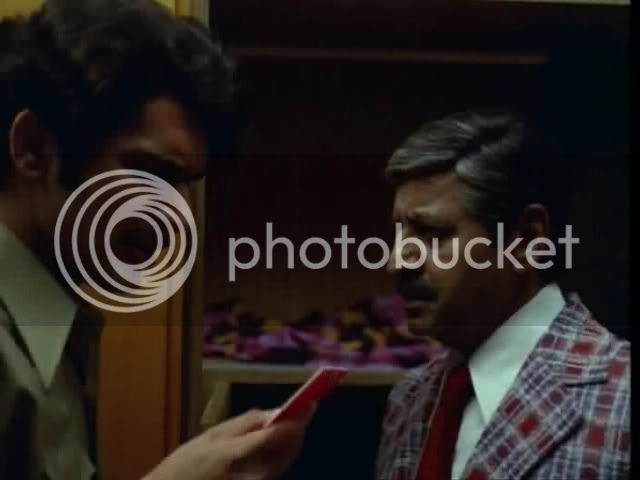 The real fun begins when Bhola (Shashi Kapoor) and Sharmili (Zeenat Aman) are released from prison on the same day. Both of them are identical: good-humored, dumb, and chatty. When the policeman bids them goodbye at the prison gates, they both cheerfully list the virtues of being in prison: free meals, free clothes, pre-set schedule, what's not to love? But free as they now are, they dance around in the Bombay suburbs, both singing "Chori mera kaam!" ("Stealing is my job!") while picking pockets. In Shashi's case, the scenes are once again very reminiscent of brother Raj Kapoor's Awaara Huun scenes in Awaara. The PPCC can only conclude this was intentional. The only difference is how chubby Shashi is in these scenes, enough so that the screenwriters thought it merited comment, as Sharmili immediately exclaims: "Look at you! You gain a kilo each time you go in!" Ahem. 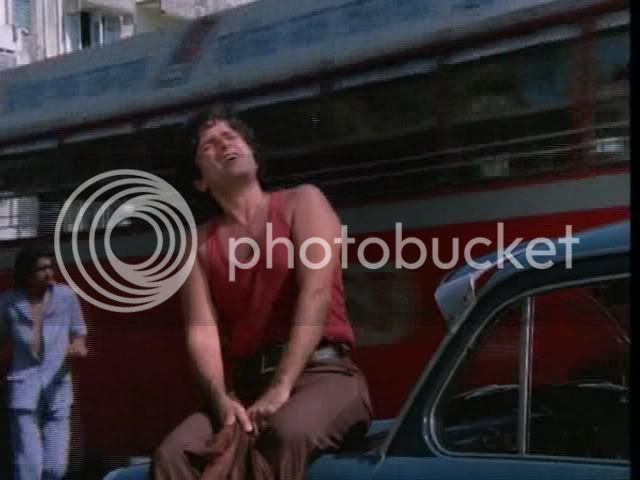 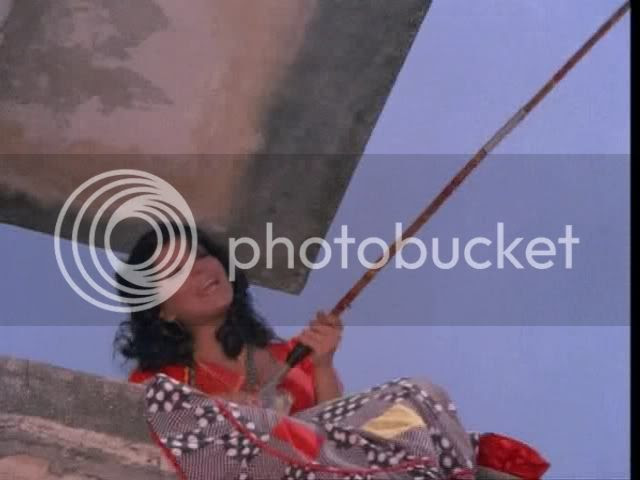 Another moment. Zeenat fishes for purses at the beach. Note the sharp diagonals, very mod.

Anyway, Bhola and Sharmili are partners in petty crime, and though Bhola tries a few come-ons, Sharmili firmly reminds him that she is not and has never been interested. Whatever, Sharmili! It's only a matter of time.

Bhola and Sharmili attempt a number of cons and eventually end up holding a manuscript entitled Chori Mera Kaam. Whoa, meta! Judging it worthless, they pick a policeman's pocket and go gorge themselves in a posh restaurant. Things get hairy, and they're thrown out by the seat of their pants. Sharmili pretends to be hit by a car, and these scenes are truly the film's delight. Bhola immediately catches on, hunkering down and slapping himself on the forehead in a very hammy imitation of the Common Man: "My woman! My woman! You killed my woman! Brothers, brothers! The rich man thinks he can run over the poor!" The "rich man" turns out to be an anxious publisher, Pravinbhai (???), who promises to give Bhola 50,000 rupees in compensation. After they bury a coffin full of rocks, Bhola discovers Pravinbhai's job and demands further compensation in the publication of his stolen manuscript. Poor Pravinbhai agrees, Bhola and Sharmili secretly rejoice, and meanwhile a third man, Shankar (Ashok Kumar), has emerged from the woodwork: he heard everything and he wants a cut too. Bhola and Sharmili shrug and give in. (Unbeknownst to them but beknownst to us is that Shankar was Bhola's foster father for about five minutes in the prologue. This is actually not important to the plot.) 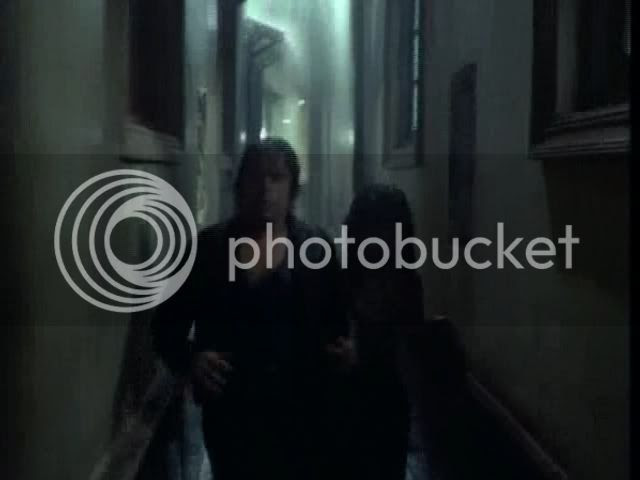 The external shots were interestingly claustrophobic. 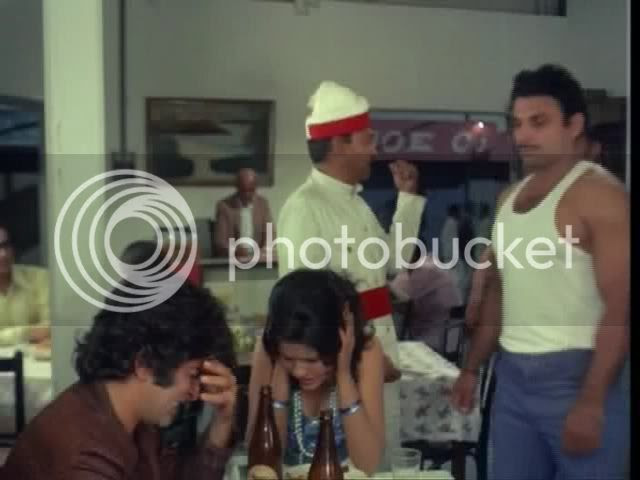 Caught out at the restaurant. 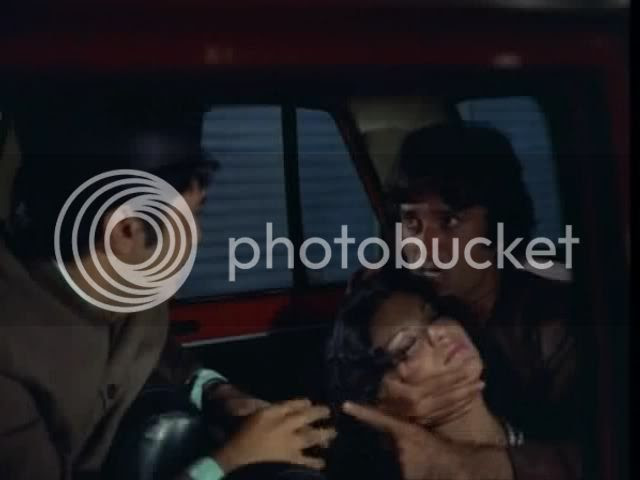 The dead-Sharmili scam. This sequence is lovable and funny, with both Shashi and Zeenat chewing up lots of scenery.

While all this is happening, a rash of robberies and murders have been occurring in the city. The serial killer/robber leaves only a card reading 7, and, through the use of masks and cons and the villain from the prologue, Pran the Policeman is framed and sent to prison. Eventually, after a wonderful lovers' spat song (TRULY glorious) which features Bhola literally removing his heart and Sharmili tossing it in the ocean, after an extended sequence where everyone gets a disguise - Shankar as Colonel Sanders, Bhola as Keith Moon, Pran as... we have no idea - and confuses everyone else, after Iftikhar appears only long enough to be punched (the man is in everything!), and after much more confusion, the villain is revealed to be the evil Number Seven after all, Bhola is revealed to be Pran's son, Shankar is revealed to be the author of the manuscript, the PPCC is revealed to be Pran, and, yea, all is righted in the world. 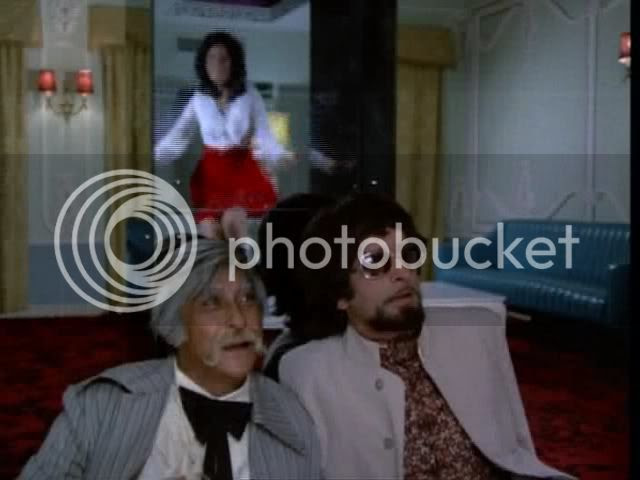 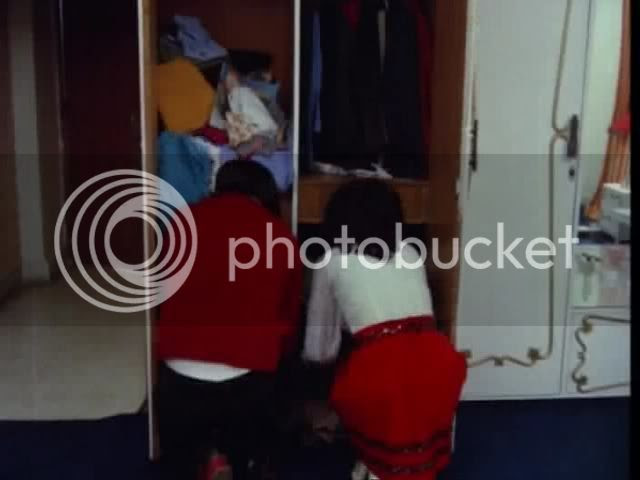 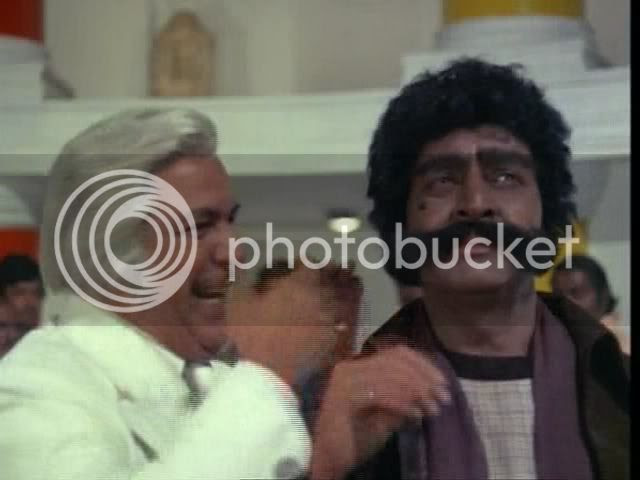 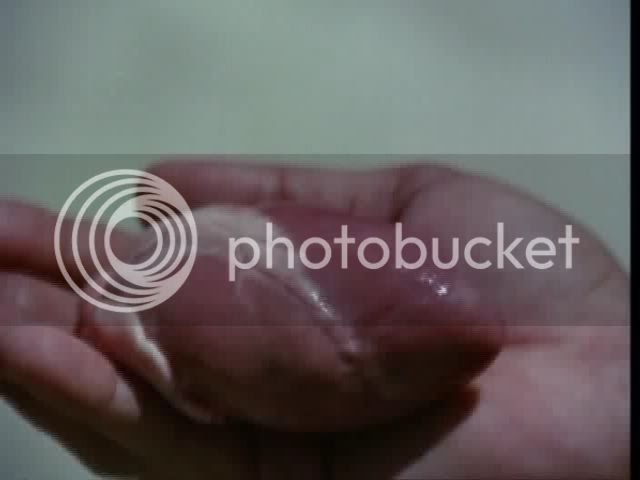 The heart bit. Watch out, it really pumps in his hand. 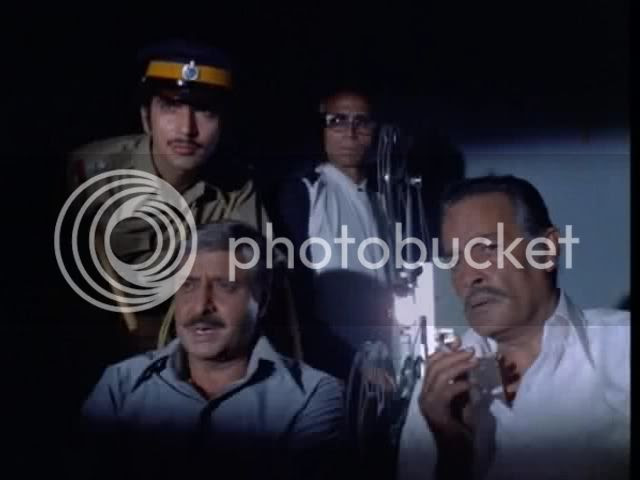 A small reenactment of Blade Runner, starring the PPCC's beloved Pran and the omnipresent Iftikhar.

Worry not about the plot, the film is packed full with delightful moments of jocularity and tom-foolery. Shashi and Zeenat are infinitely adorable as the two, airhead crooks, and their moments of tenderness, as when Bhola pinches the "dead" Sharmili's cheek, or Sharmili ruffles the disguised "sleazy" Bhola's hair, made the PPCC go all, "Aww. They're so cute together!" The film has only four songs, and the only romantic one, Kaahe Ko Kaahe Ko, outshines the others, in that it's playful and catchy and then there's just that weird thing with the heart. It's the kind of song the PPCC would like to BLAST and full volume from its headquarters. "DIL DIL DIL, YEEEEE LE. RRRRAKH RRRRRAKH RRRRAKH!!!" For lovers of the Voice of Shashi (and we at the PPCC know you're out there), there are hugely pleasurable vocal acrobatics to melt your eardrums with. Most hilariously being Bhola's despairing: "Main dusri shaadi karunga!" ("I'll get married again!") But really the whole dead-Sharmili scam is worth the price of the DVD alone*.

We have to note that Zeenat's hair looked terrible in some scenes, and Lord knows what the hair and makeup people were thinking. But she was fun and seemingly a trifle more intelligent than Bhola, which made the PPCC happy. Ashok Kumar was acceptable as Shankar, though the PPCC thinks that much of his presence was nostalgic, especially the sudden importance of his character as the film went on, despite being no one's long-lost father. Pran, who was the long-lost father (rather than the villain, for once), was wonderful, as usual. Allow us a moment to gush: PRAN!!!!!!!!! Sigh. The PPCC loves Pran so much. PRAAAAAAAN!!!!!!!

Regarding the music, the opening Chori Mera Kaam is acceptable, though nothing to blog extensively about. Kaahe Ko Kaahe Ko, as we mentioned, is delightful and this film's slice of heaven or cheesecake. The insane Main Kachche Angoor Si, with everyone in disguise and everyone going a bit lecherous and trampy, is fun in that it resembles Don's Yeh Mera Dil, except it drags a bit towards the end and the spoken word arguments are tedious. However something must be said for watching Shashi leer and grope. PRAN (!!!!!) even has an item number (?), Meri Nazar Se, which makes one think immediately of Zanjeer, but unfortunately a Pran item number does not Yaar Meri Zindagi make.

*The PPCC purchased this film for USD 1.25, but we'd value our pleasure from the dead-Sharmili scam and the second song at about USD 10.

Posted by a ppcc representative at 22:47

Oh also, you will love this
http://www.missionbas.de/krawatte2/eng_krawattenskandal.htm
I'm sure. :)

Aaaah!!! How did she spot that?!!! She is a genius. A GENIUS. That was the best thing ever.

She is, and I told her as such when I first met her last year. That's a great way to start a friendship, hai na?

Okay, this comment is actually about the movie. First, it looks to me like he is dressed not as Keith Moon but as Nasserruddin Shah (again). Second, I want to see this, which at this point I suppose goes without saying. Shashi aur Bubly is going to be my kind of film, I have no doubt. Third, thank you for pointing out VoS because that helps me prioritize my movie shopping. Fourth, I think there should be an LOLBW site where we add LOL captions to screen captures and the occasional badly styled publicity shot.

Deven Verma was just fab as poor Pravin. I do love that man.

I'm finally watching this right this very moment and OMG SHASHI is FIIIIIINE.

Also if they had just let him wear his belt out a few notches, the pudge would not even be pudging.