As M*A*S*H progressed through its 11-year run on American television, it gained enough popularity to be able to experiment around its standard format of a 30-minute dramedy. Certain episodes, such as Season 4's The Interview and, later, Season 8's Dreams, pushed the envelope by, in the former, presenting a hyperrealist mockumentary of the M*A*S*H unit and, in the latter, a surrealist character piece.

Alan Alda directed and wrote Dreams, and in it, he abandons the basic narrative format of television in favor of a series of vignettes in the form of surreal dreams each major character has. It was clear that Alda was influenced somewhat by Freudian psychotherapy - something the viewer can take or leave regarding its real practicality - but if there's one thing Freud knew how to do, it was weave a good story. And through Dreams, we learn more about the characters of M*A*S*H, in particular, what scares them and how the war affects them, than in any of the other, more "normal" episode's tearful monologues ("This damn war!").

As background: the M*A*S*H series followed a group of surgeons and nurses in an American MASH (Mobile Army Surgical Hospital) unit during the Korean War. The main characters by Season 8 were:
That's a lot of characters, but the genius of M*A*S*H was its ability to put together a harmonious ensemble of real human beings, and to give each character his or her due during the course of the series. You end up loving them all. The show's other major point of inspired art was its "wartime comedy" setting; it's blending of the tragic and comic to create something believable and evocative and human. Indeed, it's popularity remains undiminished and, the PPCC would say, not driven purely by Brady Bunch-esque nostalgia. 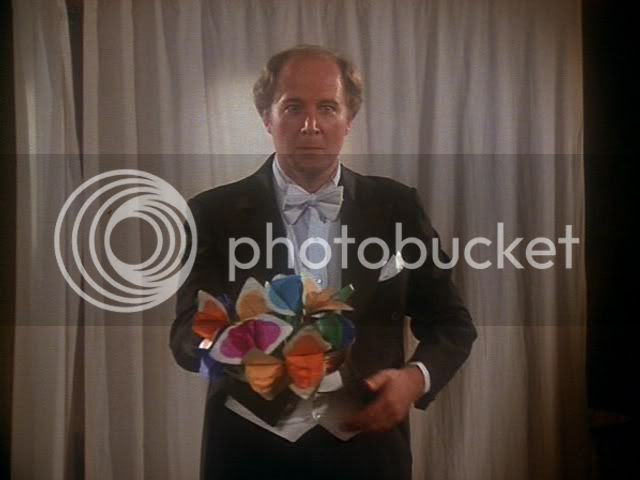 Anxiety and uselessness in Winchester's dream.
In the episode Dreams, the surgeons and nurses and clerks of the M*A*S*H unit have been inundated with wounded soldiers. The arrival of fresh wounded is seemingly ceaseless, the shifts are eternal, and soon everyone is exhausted. As the characters, one by one, snatch naps during the lulls, they each have vivid dreams. Each dream is particular to that character's personality; his hopes and desires and, especially, fears. Yet while they all dream of their particular thing - their hometown, their waiting wife, their old college professor - the dreams share two common themes. The first theme is inability to help. Hawkeye, Klinger, Father Mulcahy and especially Winchester have anxious dreams where they are unable to save the wounded. Hawkeye dreams he is armless, Father Mulcahy finds that, even as Pope, his words of comfort are useless to the crucified soldier hanging above him. Winchester's dream, where he is a magician performing parlor tricks for a dying soldier, is wonderfully effective: it shows us Winchester's characteristic arrogance and bravado in the operating theatre, as seen through his own eyes. That is, the anxiety of keeping up appearances, of asserting his socioeconomic superiority and finding that that status is now meaningless. Harvard-trained he may be, rich he may be, but this does not make him better at saving lives. 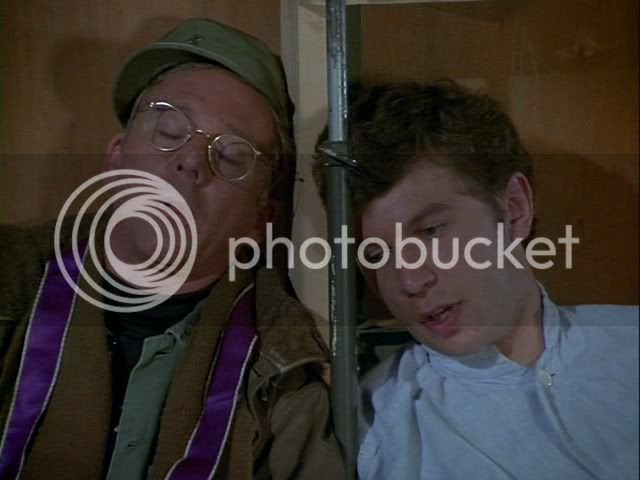 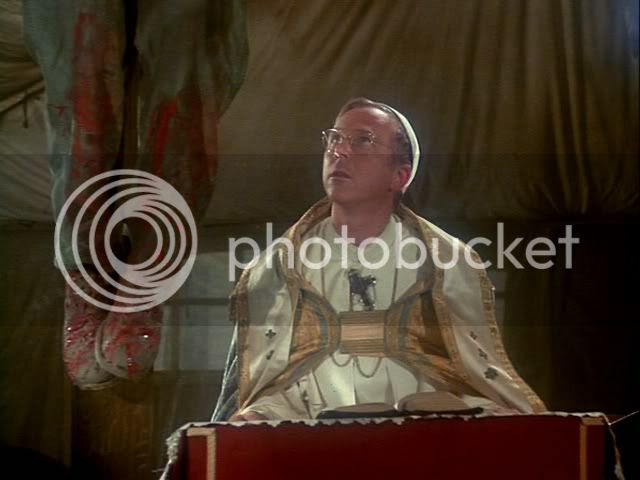 ...to the nightmare of his own helplessness.
The second major theme of Dreams' dreams is the war's interference with home. BJ, Klinger, Colonel Potter and Margaret all have dreams where an idealized "home" is shattered by an insistent war - foreshadowing, perhaps, the post-traumatic stress disorder that many veterans face. BJ, ever portrayed as the loving family man, dreams of dancing with his wife into the operating theatre - once there, he is forced to break away and pick up a scalpel. Margaret dreams of a wedding where soldiers march past and her groom, zombie-like, joins their step. Margaret is an interesting character in herself. For the first half of the series, she was the villain; a tough, cold-hearted military woman, seemingly a stand-in for all of the army's stupid bureaucracy. Yet as the show continued she was humanized; one aspect of vulnerability was her constant search for a husband, as if by this assertion of traditional feminine mores, she could undo the androgenization of life as a "tough army woman". More than once, Margaret had to remind us that she had feelings too. Yet, as her dream showed, even her attempts to adapt back into feminine 1950s normality - the traditional, white-dress wedding - were disrupted by the war. Whether this was because of its effects on her psychology, or because of its affects on the group of marriageable men in her generation, or both, is never fully understood. And maybe because of this, Margaret never seems to have a successful marriage, can never break free of the "Army life" and the war. 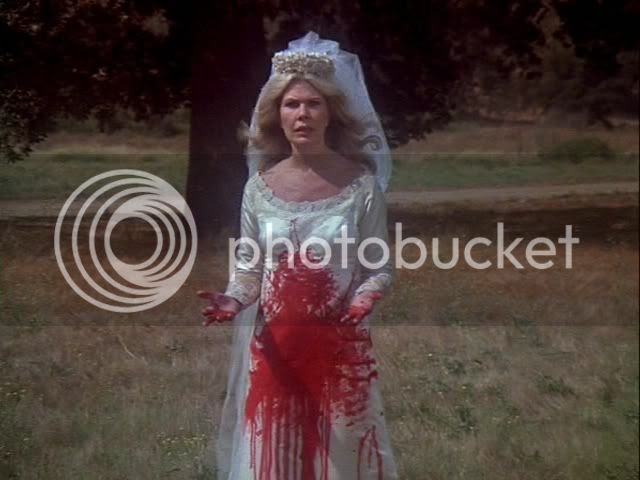 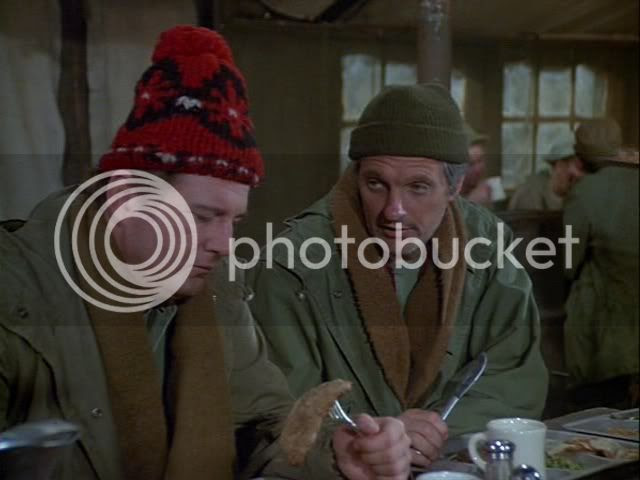 Winchester and Hawkeye, exhausted, at lunch... 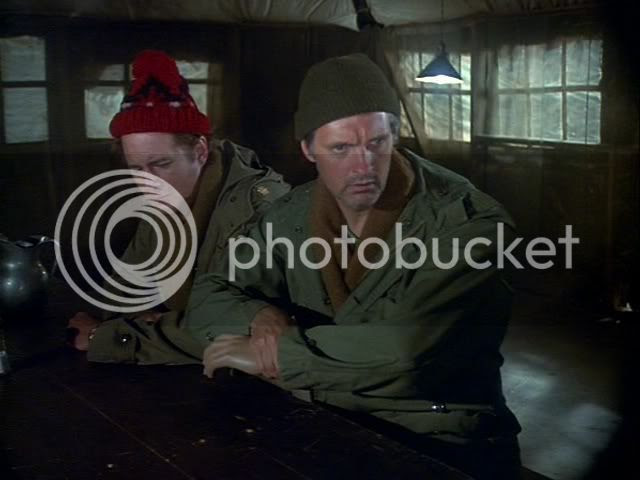 ...and Hawkeye's lunch-nap nightmare.
Alan Alda's direction is spot-on for this episode. He easily blends the character's bizarre dreamscapes with reality, and he conveys effectively that feeling of nodding off during the day, that strange yet internally consistent logic of dreams. He uses obvious visual motifs - the blood on Margaret's wedding dress, Hawkeye standing with no arms in front of a patient, the blood staining a page of Father Mulcahy's Bible - but these are nonetheless powerful. The PPCC's favorite moment, the moment we found most poignant, was BJ and his wife as they waltzed through the OR. Around them, everyone is busy, there is bloody tissue on the ground. But they continue in a happy daze, eyes locked on each other, tuxedo and ballroom dress untouched. There were also wonderful little moments such as when Father Mulcahy is falling asleep during one young soldier's confession. As soon as Father Mulcahy closes his eyes, the soldier begins speaking gibberish. As soon as he wakes, startled, the gibberish becomes English again. 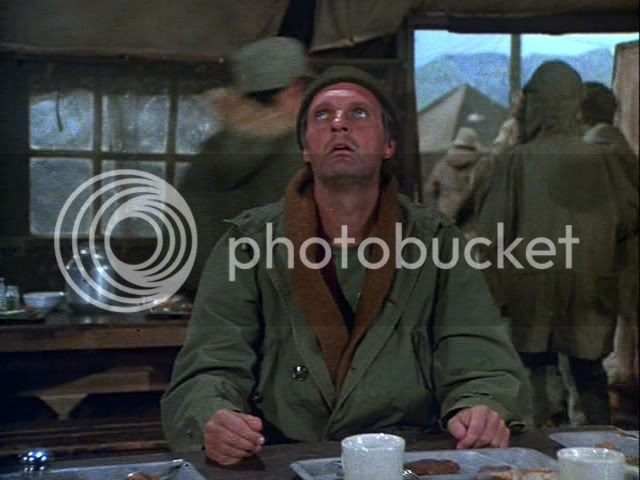 The ominous sound of the helicopters returning with more wounded. 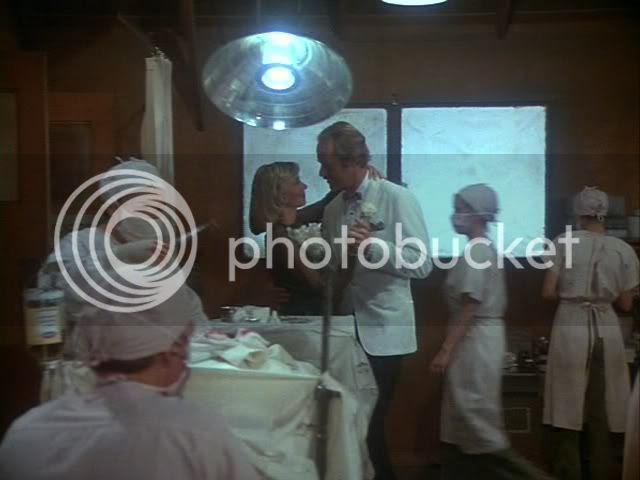 The PPCC's favorite moment. BJ's dream.
While this is sorely lacking in the fun ("Jocularity! Jocularity!" - Father Mulcahy) of a more typical M*A*S*H episode, its very atypicalness is what makes it special and enjoyable. Highly recommended.
Posted by a ppcc representative at 18:42

Was pleasantly surprised to see my favorite TV show mentioned on the PPCC blog :) I have seen every episode at least twice and they never get old. This one broke with tradition but like 'The Interview' did so in a way few shows could today.

My favorite episode of all time that never ceases to make me misty is 'In Love & War'. Another one written & directed by Alan Alda - it is the one where he falls in love with Kyoong Soon but she has to leave him to care for her mother.

Incredible show that I could discuss for days - kinda like Bollywood. Cheers!

Thanks, Sanket! Which season is In Love and War on? I was recently thinking how excellent Fallen Idol is (once again, written and directed by Alan - the man could do no wrong! at least regarding M*A*S*H) - the one where Radar is hurt and Hawkeye gets drunk during work. Oh, the humanity! Anyway, might review a couple more episodes. I keep planning to do Goodbye, Farewell and Amen (the final episode) but it's a bit of a daunting task - so much to talk about!

'Fallen Idol' is a bittersweet one for me - a wonderful yet heartbreaking episode but one that I referenced in a letter years ago to a friend who had hurt me very much - in your words, oh the humanity :)

'Love & War' is in the same season as 'Fallen Idol' - Season 6. The final episode's scene where the baby is muffled to keep from being heard is still one of the most devastating scenes I have ever witnessed on film. It doesn't come on TV too much so I haven't seen it but twice but it is such an intense episode that less is more.

Are you fan of the post-Henry/post-Frank years or vice versa? I am a fan of the later years but I have been called a heretic on some MASH boards for that opinion!

We are M*A*S*H fans of the same ilk, then! I too think the golden years were post-Frank and post-Henry. Frank's one-dimensional villainy just dragged the show down, and he ruined many an episode in my eyes. Also, Winchester has slowly become my favorite character - maybe it's his complexity and character growth, or maybe it's just because he usually pretends to be mean but is actually quite sweet.

That said, I would agree that the show lost its freshness in the later seasons, and it became especially preachy in seasons 9 and 10. I think the best seasons were 4, 5, 6 - my favorite episode is probably "Kids" (or "The Kids"?). Season 4 or 5, about an orphanage that comes to stay at the 4077th one weekend. So wonderfully humanistic, so fresh!

I checked my season 6 DVDs and unfortunately my first one, which has In Love and War and Fallen Idol, is scratched beyond saving. But now I'm curious to re-watch In Love and War, especially considering that they used that terrible baby incident again in the final episode - it's what puts Hawkeye in the psych ward.

Oh, dear! As Raj Kapoor/Mukesh would say, one watches MASH "rote bhi rahe, hanste bhi rahe"! And you even cited a MASH episode in a personal letter? Gush. Now you've just inspired me to re-watch Goodbye Farewell and Amen and see if I can write up a decent review of it!

Nice analysis of the Dreams episode of MASH. However, you inappropriately credited Alan Alda as having written the episode. It was actually cowritten by Alan Alda and James Jay Rubinfier, with the initial concept and most of the dreams having been written by Rubinfier. The episode's success belongs to Alda's direction, but the existence of the episode is shared between Alda and Rubinfier.