Many people around the world often ask themselves, WWJD? That is, "What would Jeff do?" The Jeff is pleased.

As we all know from the canon of Jurassic Park, Jeff would disapprove of unchecked scientific progress, especially that which is profit-driven. We cannot underestimate the power of Mother Nature, nor can we think to control it. As Jeff himself proclaimed, "Life... uh, finds a way."

But not only did Jeff warn against the hubris of human beings, not only did he predict our Icarus-like fall when everyone else was still thinking the power was trying to come back on, Jeff was also pretty damn hot. I mean, check out that trendy shirt, half-buttoned up, those trendy glasses, that trendy Adam's Apple. That is one sexy chaotician.

If you are lost, the PPCC can only suggest you watch the wonderful, the inimitable, the highly enjoyable Jurassic Park. Frequent PPCC readers may be asking themselves why we choose to review such a mainstream Hollywood movie. The reason, of course, is Jeff. The PPCC loves Jurassic Park - like love loves - but we also need to recognize the bizarre, cult-like following Jeff Goldblum seems to have. Maybe it was his choice of films in the 70s, 80s, and 90s: many of them creepy, often a little bit sci-fi, a little horror, a little bit eroticized. See, for example, The Fly, or Earth Girls Are Easy, or Invasion of the Body Snatchers, etcetera and so forth. Or maybe it's the characteristic way he delivers his lines: "Uh, I, uh, I... hope you wash your hands... before, uh, before you eat anything!" Whatever it is, there's just Something About Jeff that makes people remember him and want to emblazon his pop icon status in really bizarre ways. 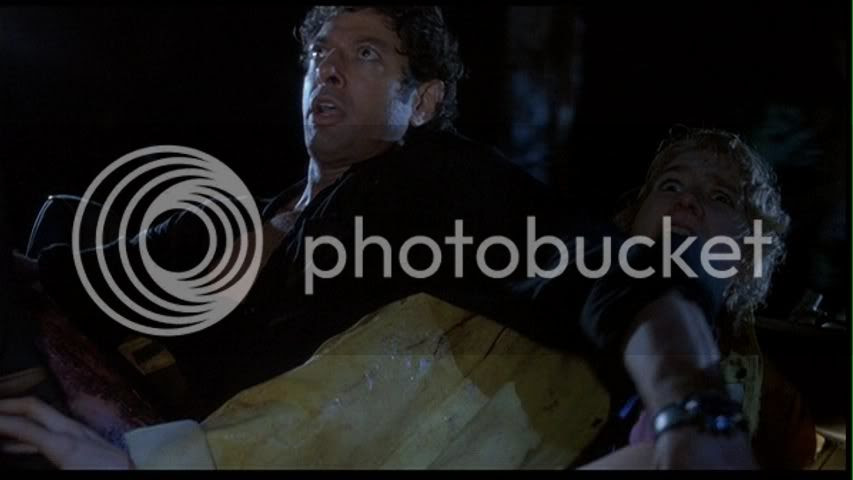 The Jeff, protector of screaming women.

But we don't want the JP review to become a Jeff review, ergo we will focus now on JP as a film, and not simply as a Jeff Godlblum vehicle.

For those who have been living under a rock, the plot of JP is this: based on a popular Michael Crichton novel, scientists have found a way to clone dinosaurs using the old DNA captured in fossilized mosquitos. Megolomaniac billionaire John Hammond (Richard Attenborough) builds a theme park around these next generation dinosaurs, and invites paleontologists Dr. Grant (Sam Neill) and Dr. Sattler (Laura Dern), as well as mathematician Ian Malcolm (the Jeff), sleazy lawyer Gennaro (Martin Ferrero, of Miami Vice fame), and, just to make matters worse, his two grandchildren, Lex (Ariana Richards) and Timmy (Joseph Mazzello), for a weekend touring the park. 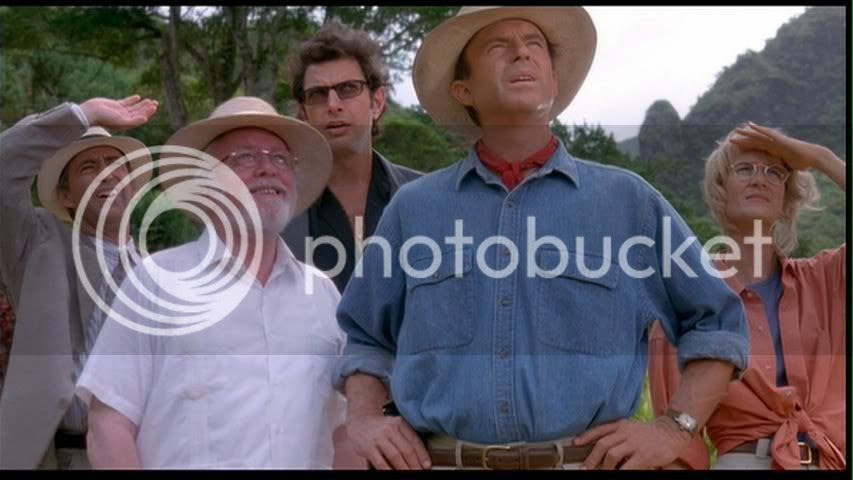 Check out the color balance in the costume design. Every detail of this film is touched with genius! 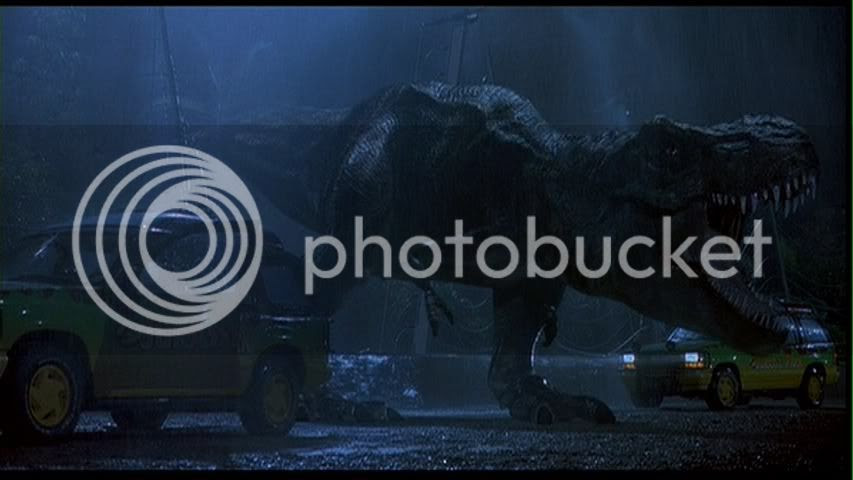 An example of some excitement.

Being that the film is directed by Steven Spielberg, it is rambunctious, thrilling, intelligently shot and completely manipulative. As per usual, we are Spielberg's puppets and we dance to his tune. We enjoyed it the first time, the thirtieth time, the hundredth time. In fact, it's longevity as a PPCC favorite is admirable. Many of the film's dialogues have gone down in PPCC history, and we often judge people on whether they recognize lines such as, "They do move in herds!" or "It's a veggie-saurus, Lex!" Scenes such as when we see our first dinosaur, and Sam Neill clumsily removes his aviator sunglasses to marvel, have been burned into the PPCC consciousness for eternity. And the music! 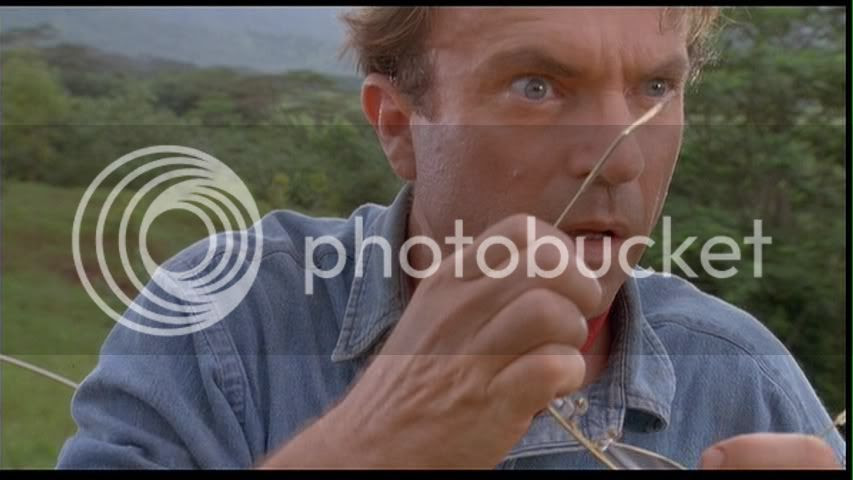 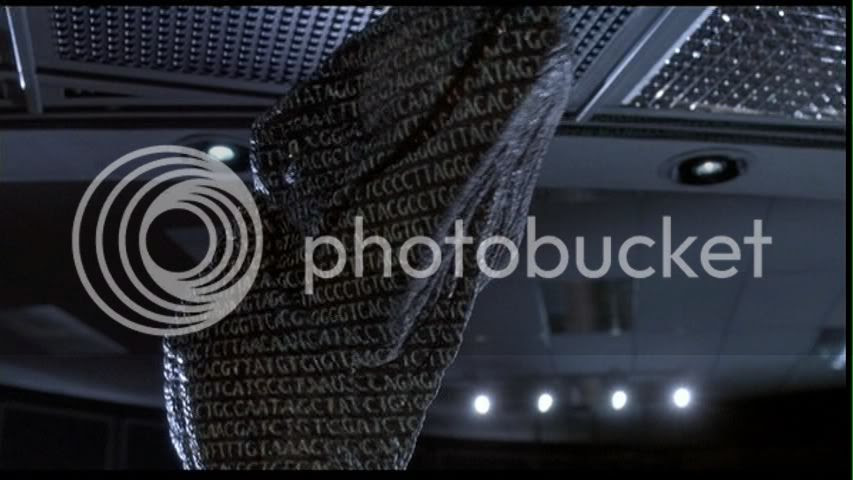 Lovely shot; a raptor with some genetic code reflected onto him.

Gush. The music is a thing unto itself. It is as mainstream as mainstream can get - John Williams - but let that not tarnish it, oh ye of counter-cultural tendencies. The bit when it goes DOO doo doo DOOO DOOOO (main theme), or just the way the music suddenly leaps alive when the jeep crashes above Sam Neill's head, is just choice. 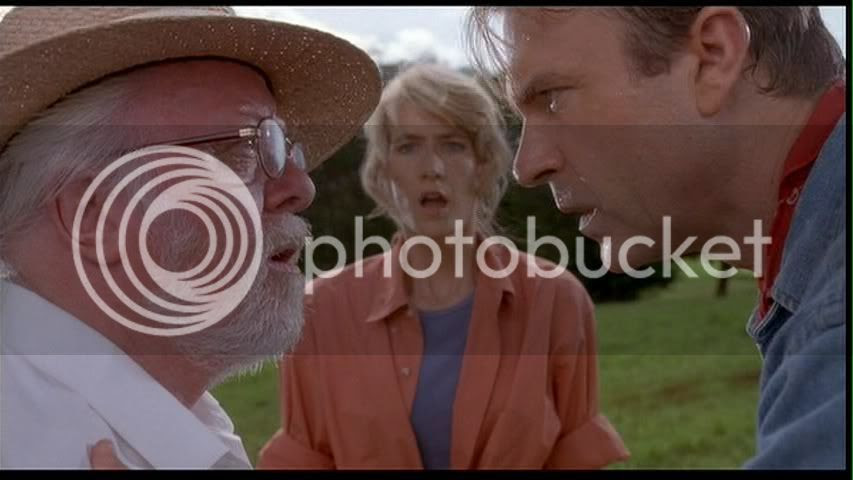 The performances are uniformly predictable and uniformly enjoyable. Sam Neill, another veteran of that creepy, sci-fi, horror road (see Event Horizon or Dead Calm), flexes his eyebrows and stares in terror and generally fulfills the Archetypal Scientist Hero role. Laura Dern, likewise, screams very loudly, and little Ariana Richards even more so. Joseph Mazzello is surprisingly good as a mini-Sam Neill, and of course, then there is the Jeff. But everyone is good, and we have no space, but we could continue gushing.

Perhaps what's so long-lasting about JP is that it should superficially be a pulpy B-movie, and yet it was so wondrously alive that it became a surprisingly fun A-movie. While the shocks are no longer shocking (that goat's leg on the car, for example), the thrills are still thrilling and, with each viewing, it becomes a little bit funnier, a little bit more sweetly nostalgic. Ellie, look! They do move in herds!

Posted by a ppcc representative at 23:49

This is what happens when you ditch us for India, PPCC. We're left grasping for reviews wherever we can get them, even your own archives and even of an English-language movie that came out when we were in high school. Also we start talking about ourselves in the third person because we miss the way the PPCC does so. It's all y'all's fault.

The Velociraptor with the codes on it is a FEMALE known as "The Big One."

Oh, for the love of God.