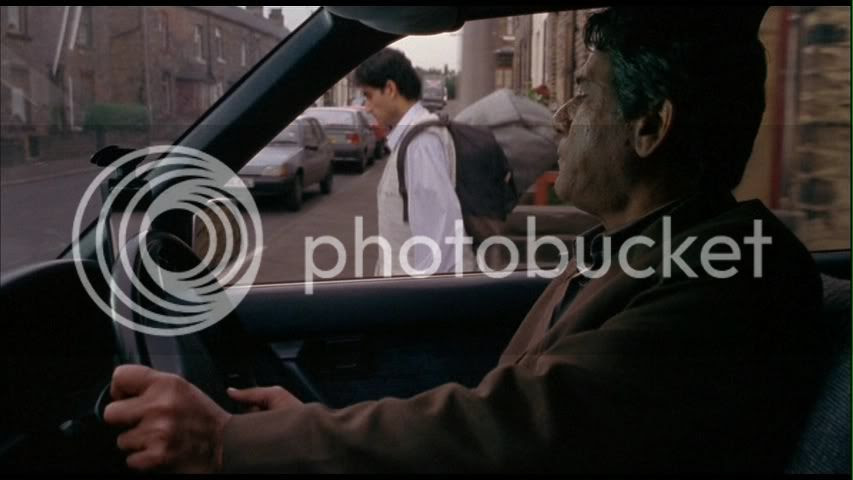 A beautiful moment in the film. "Remember two things. There are many ways of being a good man. And I will be at home. Will you come and see me?"

During one scene in the wonderful My Son the Fanatic, a character vulgarizes the line from Shakespeare: "The quality of mercy is not strained. It droppeth as the gentle rain from heaven." 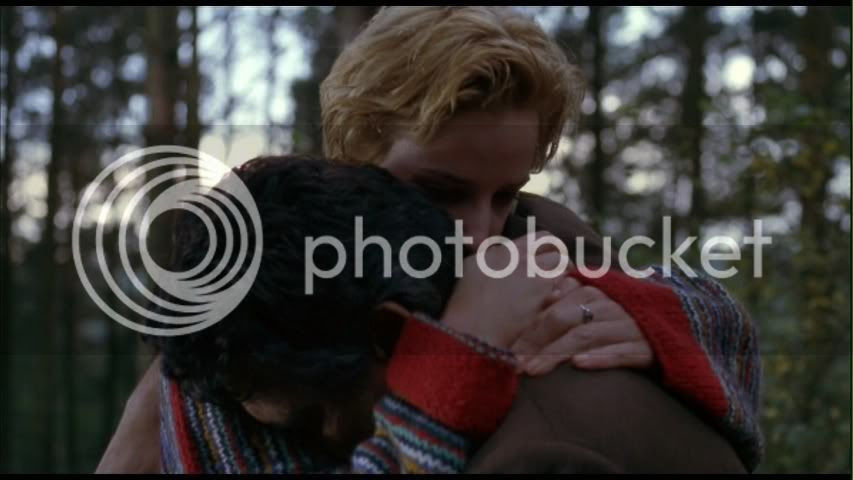 Although the character was talking about female genitalia, the line could capture the film's main theme itself: morality as defined by easy-going tolerance and humility (i.e. not strained), or morality as defined by a strict set of rules (i.e. strained). The former is embodied in Parvez (Om Puri), the naive, good-natured protagonist, and the latter embodied in Farid (Akbar Kurtha), his proud, angry son. While Farid is all righteous indignation, Parvez takes everything in stride - the prostitutes plying their trade in the back of his cab, the obnoxious German client, Schitz (Stellan Skarsgard), incessantly calling him "little man", the racism and humiliations of living as a South Asian immigrant in northern England. There is the irony that Parvez, who still speaks with his heavy Pakistani accent, should be lectured on re-connecting with his roots by his son, who has vowels like Sean Bean. The irony that all of the rage at living as the "wrong" ethnicity in England, the former colonizee, all of the resistance to assimilation and retreat into fundamentalism should, again, be the son's domain, not the father's. Because it would be so much easier for Farid to assimilate; he has been raised in England, he speaks without accent, he understands the culture. And it would be natural for Parvez to idealize the country he left long ago, to feel threatened by the alien city he has, for economic reasons, migrated to. Yet it is just the opposite, and Parvez doesn't think listening to Louis Armstrong undermines his cultural heritage - he simply likes the music. And, more importantly, he sees no problem with befriending a white prostitute, Bettina/Sandra (Rachel Griffiths), who later becomes his bodyguard (in the Paul Simon sense) and confidante.

Things become complicated when Parvez's friendship with Sandra turns into full-blown romance. Just as this happens, Farid invites a fundamentalist maulvi to stay at home, and his local group of angry, young men begins to terrorize the prostitutes in the neighborhood, making them the scapegoats for what they see as an immoral society "soaked in sex". 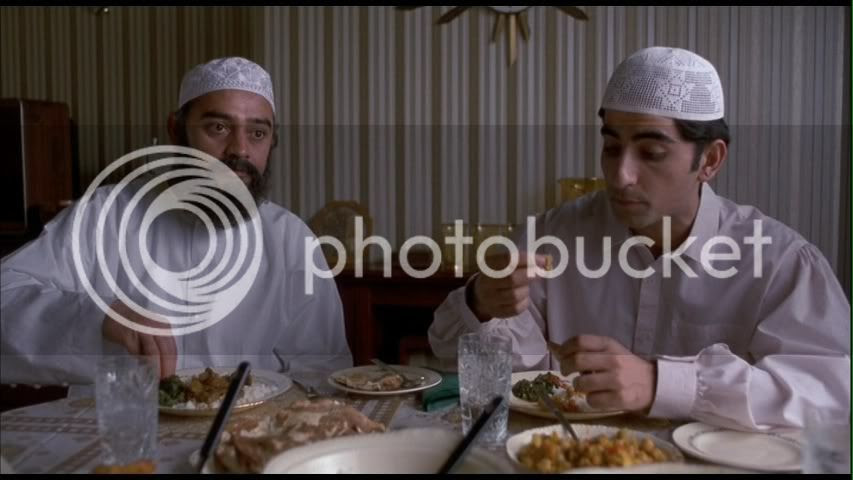 Farid and the maulvi at dinner. 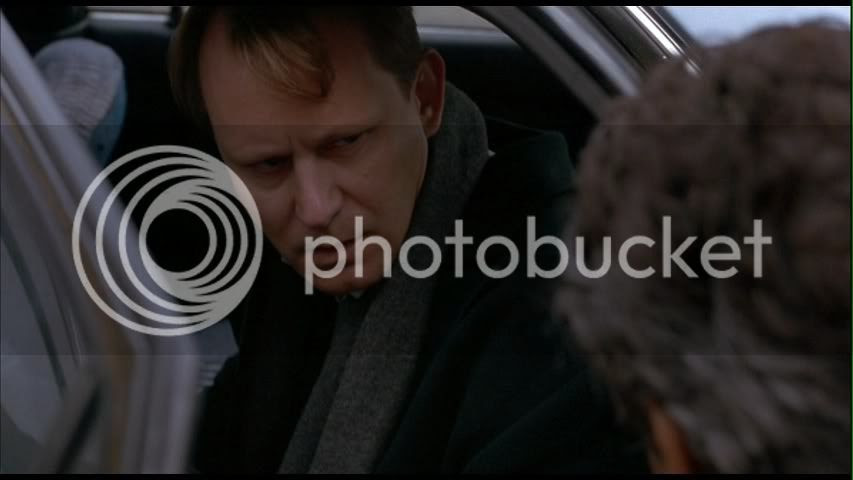 Schitz, the German immigrant. Beware, Stellan Skarsgard fans, this is a spare and awful role. 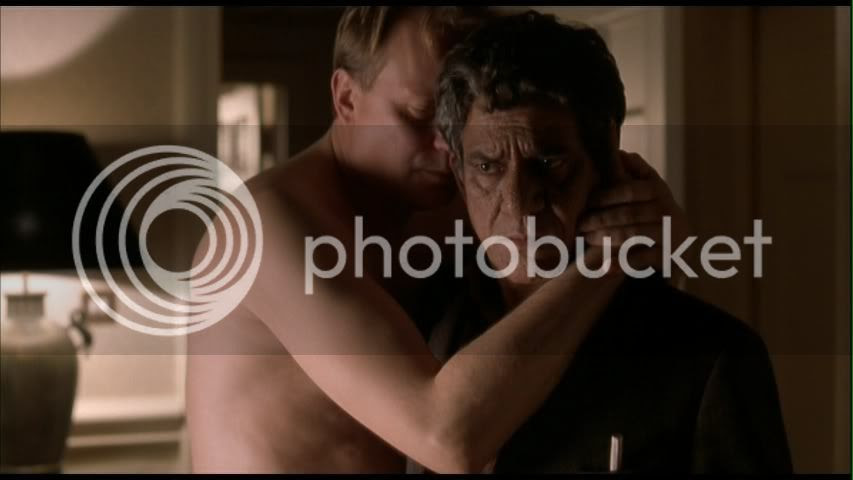 Schitz being creepy to Parvez.

In the usual style of Hanif Kureishi's stories, the film is very complex, with several more themes (important and obvious ones being postcolonialism, migration and racism, and the most poignant one being forbidden love). Yet there are probably many ways of interpreting the story. Our personal interpretation was that the moral dichotomy between Parvez, who is a flawed but ultimately good man, and his son, greatly favors Parvez. This is not just because Fundamentalism Is Bad, but this is also because the film makes no effort to sympathize with Farid's fundamentalism. While it is explained as a reaction to the constant humiliations his father suffers (and boy, does Parvez get kicked around!), the film ridicules and infantilizes Farid's decision to fight back with radical conservatism. Indeed, the direction is scathing at times: consider, for example, the scene where the maulvi is watching cartoons at Parvez' kitchen table. He is watching a cartoon woman get smashed into a trash can by a cartoon man, and he is laughing his head off. The maulvi is then further undermined by the scene where he asks Parvez to help him migrate to the UK. 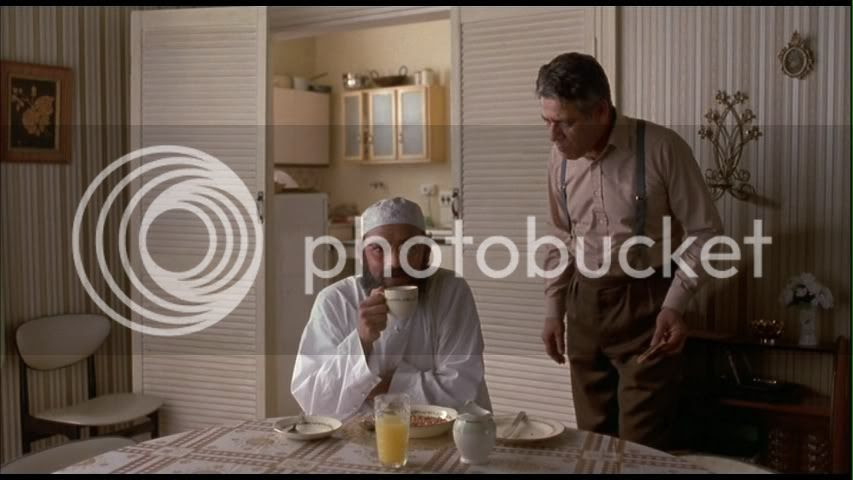 The maulvi in Parvez's home. 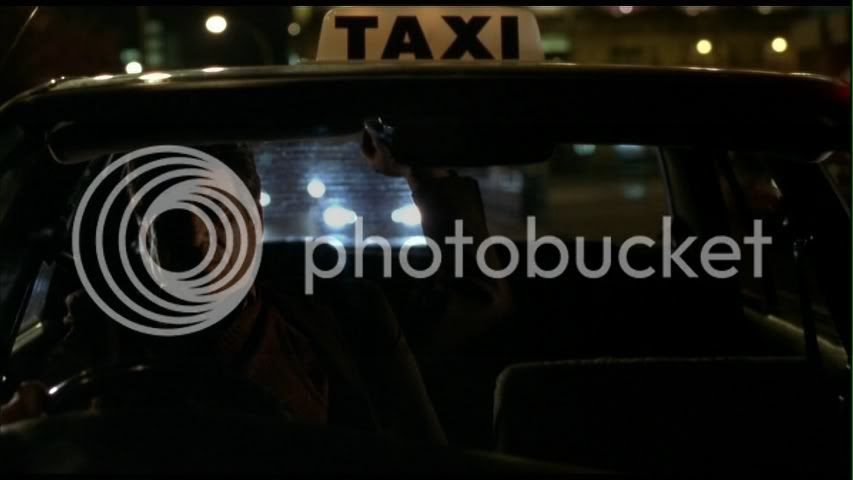 Meanwhile, Parvez is all sympathy. Partly this could be Om Puri's talents and inherent lovableness, but there is a compelling underdog quality to Parvez. He is so earnest and naive: happily chattering away with Sandra about his son, joking with his wife about pulling the maulvi's beard off, or telling Schitz about his youthful dreams of being a cricket star. It's when this emotional honesty is abused by the other characters that the film is most painful. Several scenes depicting Parvez's humiliation at the hands of explicit and implicit racism were so awful they made the PPCC's guts churn. One scene made us start crying. And then the scenes when Sandra offers Parvez a chance for escape were similarly emotionally affecting. Never mind the fact that seeing Om Puri naked was LIKE WHOA and seeing Om Puri sex scenes was LIKE OMG MY EYES. Conventionally beautiful he may not be, but the PPCC was so fond of Parvez and we empathized so much with him that the romance was almost impossibly sweet. And whatever, Om Puri is strangely attractive, too. (For readers who seek more in the Om Puri's Ocean of Love genre, please see Droh Kaal or Sparsh.) 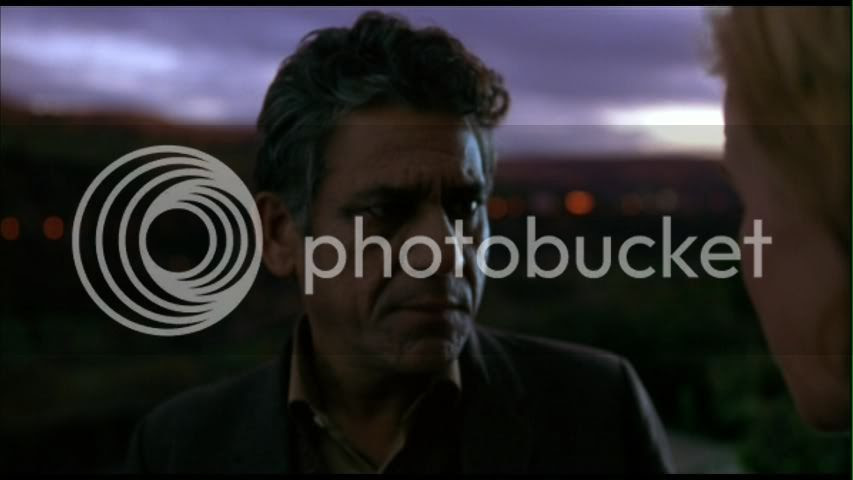 All this gushing should not lead the readership to think that this is a film without flaws. Unfortunately, there are several false notes - like in Kureishi's other excellent sketch of postcolonial Anglo-Desi culture, My Beautiful Laundrette, they usually occur when someone is Proclaiming Something Important or just being a little too obvious (such as Roshan Seth's despondent, "They hate us here!" urgh). Kureishi's strength is his ambiguity - of plot, of characterization, of blame - and so when he becomes declamatory, the PPCC goes cold. Similarly, the character of Schitz (who, yes, is a shit), while very interesting in what he represented, was nonetheless a little one-dimensional and stylized - especially for Stellan Skarsgard! As an example of racial determinism in migration, and as part of the racist machine in how he (mis)treats and condescends to Parvez, Schitz is very effective. The Wiki article notes Schitz' mirror-like persona: like Parvez, he is a migrant, yet he is white and succesful. He is everything Parvez's son hates about the West, even as the blame is often cast on Parvez. Also, importantly, Bettina is Schitz' companion of choice too. Yet Schitz is also inhuman. He is just a representation: for privilege, for sin, for the empowered businessman. Never do we see any glimpses of humanity, and for a writer who works so hard to give us interesting shades of gray, Schitz was just a little too black-and-white. 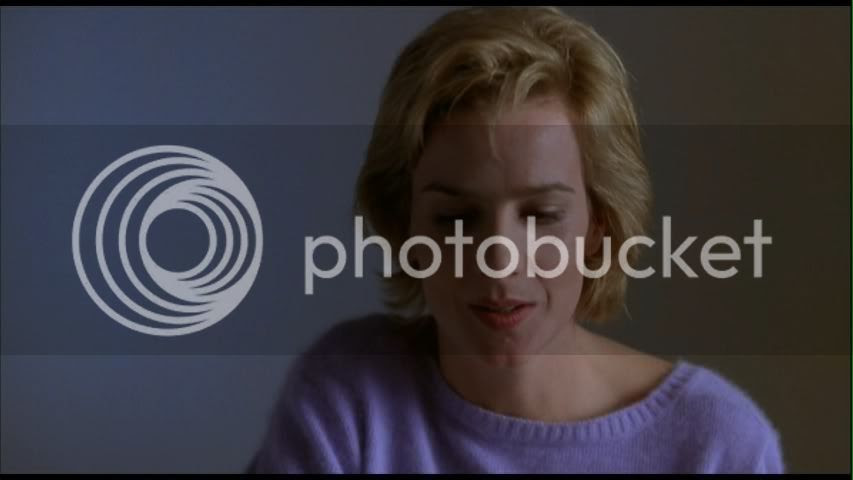 It should be noted that Parvez is the only one who treats Sandra with any degree of respect. 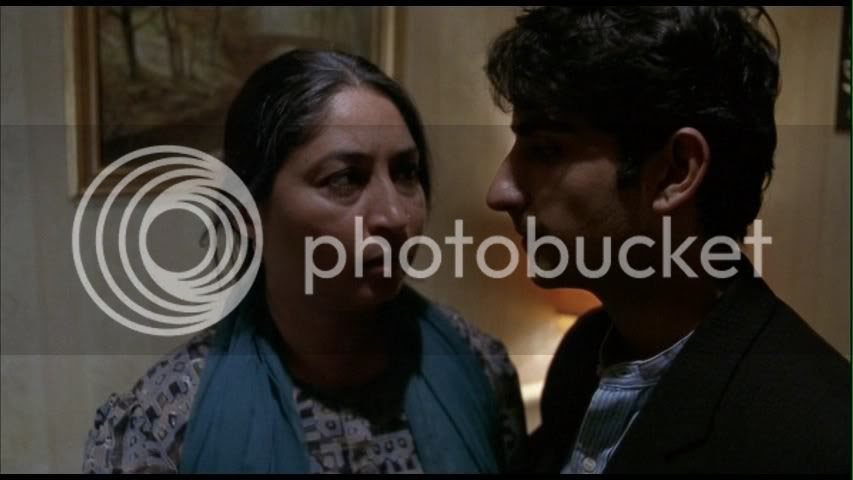 Farid and Mom, at home, plotting things in tenebroso light.

Nonetheless, this is a wonderfully evocative, provocative film. It makes you think, but it is also emotionally affecting. Rarely is it manipulative (though, as mentioned above, there are some misses - Bettina/Sandra's bruises, for example, were not needed). As in My Beautiful Laundrette, the film strongly features themes of a forbidden romance, the lower fringe classes of English society, fathers and sons, and colonial history. It is highly satisfying, but never facile. The PPCC preferred this to My Beautiful Laundrette, partly because the narrative was more focused and the protagonist more compelling. Culture Vulture's review makes a very good point in emphasizing the mid-life crises/rebirth of Parvez as the main thematic arc. Thanks to the riches of Kureishi's writing, a viewer could easily watch this and interpret it all as that. Or they could interpret Parvez as the true hypocrite and his son as misguided. Or an East-West cultural clash. As with most good art, it is highly flexible, your choice of interpretation is probably very revealing, and you probably take away what you had already brought with you when you sat down to watch.

Posted by a ppcc representative at 16:07

Ive seen East is East..im not sure if it portrayed a precise image of the south asian immigrant. but, it was reallly funny..omi puris accent and the children were comedic.