Just like its prequel, Dnevnoy dozor (Daywatch) is visually engaging but intellectually incoherent. Based on a popular Russian novel, it is an entertaining and schizophrenic romp through urban fantasy. The setting is present-day Moscow - at once decrepit, dystopian, Gothic and romantic - where a large community of Others patrol the night and day shifts. Long ago - both Nightwatch and Daywatch inform us - a great battle between the Light Others and Dark Others took place and an uneasy truce was formed. Light Others owned the day, Dark Others the night - but each opposing side patrolled its enemies for breaches in the truce.

This truce is never really explained, though things like sucking the blood out of old ladies using a juice box are apparently unacceptable. So begins Daywatch, where - after a brief prologue reintroducing us to the cast of characters - our Byronic hero Anton (Konstantin Khabensky), a 3rd-rate half-baked Other, is playing teacher to Svetlana (Mariya Poroshina), a somewhat vacant-eyed blondie who is destined to become a Great One. While riding around in the van, they come upon the previously mentioned vampire with a juice box. After much excitement and incredible visual acrobatics, we see that the vampire is not just any Dark Other but Yegor (Dmitry Martynov), son of Anton, himself. Indeed, while the film attempts many emotional entanglements, this is perhaps the only one which rings genuine: the good but fairly decrepit father who, in a moment of weakness, attempted to kill his infant son (via a dark curse), and the son, having grown, who chose the Dark Side because of this betrayal. The film's only authentically poignant moments are those in which Anton struggles with the consequences of his choice and watches Yegor turn further and further away from him. Also, it has a nice Greek tragedy ring to it. 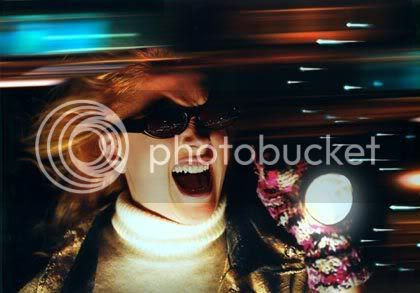 The rest of the film becomes an incomprehensible jumble of sped-up film, lightning flashes, a second father-son melodrama, bizarre but gorgeous close-ups, uneven emotional switches and yet more incredibly inventive special effects. This is perhaps Daywatch's and Nightwatch's main strength: numerous fresh and fun visual fantasy elements. This stuff makes the over-praised slow-motion swinging cameras of The Matrix look like caveman paintings. Check out this stuff: The car that speeds along the side of a building and, stopping, tumbles into the hallway. The man packing his enemy's face in snow and then uses that mask of snow to transfer the other man's face onto his own. Pupils glowing red and leaving trails in the dark. And then a thousand other particulars - usually happening too fast to fully appreciate or notice. Heck, even just the camera angles and focal depth were fun and weird! 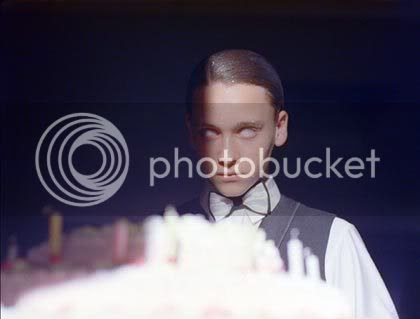 The problem then becomes an overload on the senses. When the PPCC saw Nightwatch, we came away thinking that the filmmakers had too many good ideas and a terrible editor. Everything was left in, and the result was a barrage of visual tricks and gimmicks. It was certainly fun, but it was also distracting (ugh, the subtitles were especially tacky), bordering on grotesque. Daywatch seemed somewhat more restrained - or maybe the PPCC just knew what to expect and came prepared this time.

Yet as delicious and overwhelming eye candy as this is, it is so emotionally unbalanced that it's hard for a viewer to latch onto anything within the story. The story is also told at such a frenetic, unrelenting pace that you are left with no time to absorb or, well, comprehend. Rather you can only marvel at the fireworks at arm's length, watching but not really caring when characters are killed or reunited. The plight of Anton, who was introduced to us in Nightwatch as possibly the most wretched anti-hero since Renton in Trainspotting, is engaging enough, but this is due more to Konstantin Khabensky's looks (hey, he cleans up well!) and the time we spend with him than any acting tour de forces or narrative backing. The filmmakers also couldn't decide on which emotional thread to follow, and so, like the imagery, we have an uneven barrage: now ironic 60s Russian lounge ballads, now choral melodrama, now death metal, now a Harry Potter-like theme of wonder. The characters likewise shift in and out of moods without any seeming provocation. Basically, if this plot was a person, it would be manic depressive. Yeah, he cleans up well. Actually, he dirties up better.

Western viewers might recognize the style of the film as that brand of Buffy the Vampire Slayer- or Underworld-esque goth fantasy. Yes, metal and black leather feature heavily. But this is a film wonderfully embedded in Russan fantasy - the prologue which features the fortress in Samarkand is especially refreshing (if we see one more central European haunted house...). And the portrayal of Moscow - with its sweating dark alleys and streaks of flourescence - was like a natural extension of Blade Runner's Los Angeles: beautiful and terrible. So while fans of Hot Topic might enjoy Daywatch, it is very much beyond the boundaries of standard Hollywood fare. For this reason, and for the visuals alone, the PPCC definitely recommends a viewing. You may not understand what's going on, you may be thrown into a fit by the strobe-like flickering images, but you'll certainly find something to marvel at in all that mush.

Pictures from The Daily Telegraph.

Posted by a ppcc representative at 03:06

At the risk of sounding cliched: as with so many book adaptations, the novel is always better, even when judging the book by its cover.