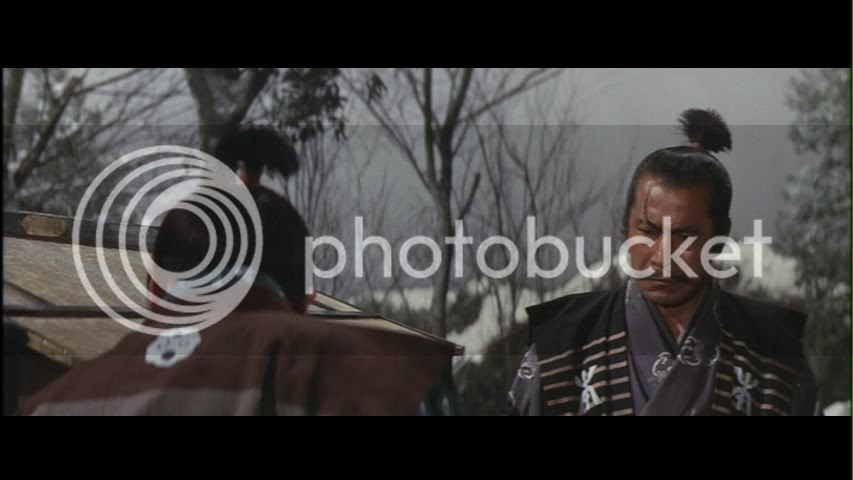 All hail! The best actor in the universe!

Man, Toshiro Mifune was da BOMB. He was absolutely, unconditionally, unparalleledly DA BOMB. If he was a number, he'd be infinity to the infinity. 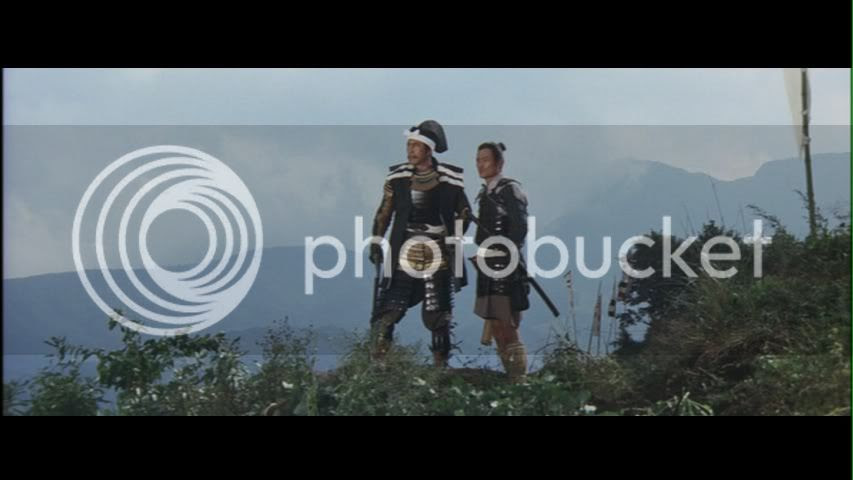 Toshiro, you were da bomb.

The magnificence of Toshiro Mifune was sometimes complimented by the surroundings; such as in the case of the epic jidaigeki samurai swashbuckler, Fuurin kazan (Samurai Banners). This is a film full of pageantry and glamour. The battles are large, the costumes precise, we have sweeping shots of gloriously large mountains. Set during 16th century feudal Japan, it tells the story of Kansuke Yamamoto (Toshiro Mifune), a ruthless and ambitious samurai who became a legendary general in the Kai domain. Under the lordship of ruler Takeda (Kinnosuke Nakamura), Kansuke dreams of conquering all of Japan - uniting the country from sea to sea. For a man who professes to dream of peace, however, he's an awfully violent guy. The prologue establishes him as a man whose ambitions often outweigh his scruples: betraying a fellow samurai and killing him in order to get a job.

After advising Takeda to overthrow the nearby kingdom of Suwa, Kansuke finds the now fatherless Princess Yu (Yoshiko Sakuma) about to kill herself. Yu's maid is insisting that she must, out of honor, but Yu - who reveals herself to be as powerful and single-minded a figure as Kansuke - outright refuses. She does not want to die, so why should she? Instead, Kansuke takes her prisoner and delivers her to Takeda, who takes her as a concubine. It takes more than a little convincing on Kansuke's part to get Yu to agree to be Takeda's concubine and bear him a son. All the while, political and military machinations aside, Kansuke is falling a bit for the fiery young princess. The feelings seem reciprocated, until, after giving birth to an heir, Yu declares that she both loves and hates Takeda, and will forever be consumed by these conflicting feelings. Kansuke is understandably disappointed. 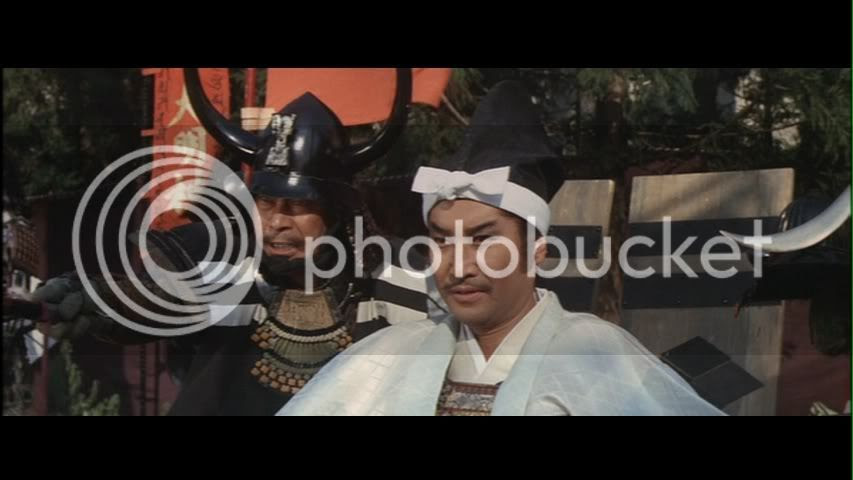 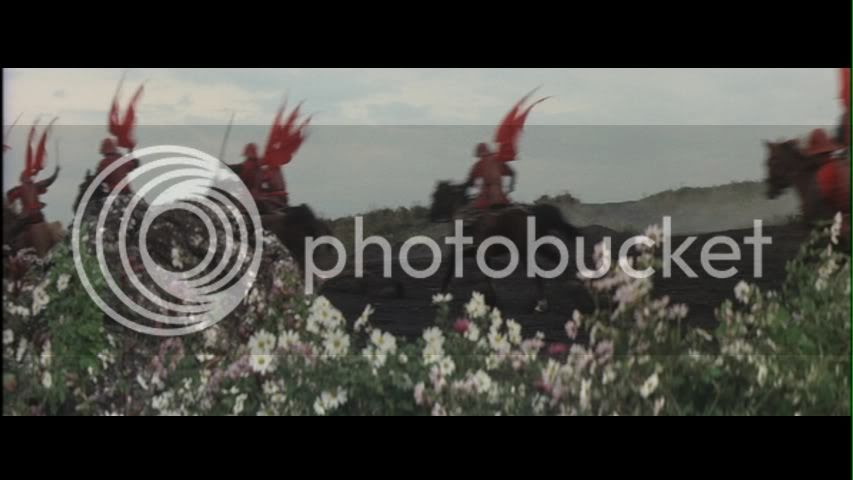 One of the large-scale battles.

All of this culminates in the famous battle at Kawanakajima, which, if you know your Japanese history, should come as no surprise. The PPCC knows nothing about Japanese history apart from what Toshiro has taught us, but we do know our narrative structure, so we weren't that surprised. But it was still magnificent and sad. 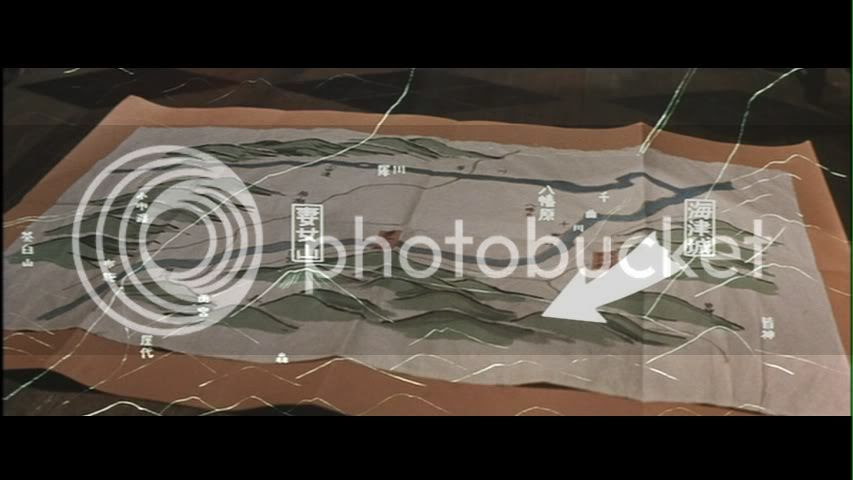 This was one of those movies where they have little diagrams explaining battle strategies.

Apparently the Kansuke of legend had a bad eye and a bad leg, and Toshiro thus manages to infuse Kansuke with an air of hardened gruffness but also fairly obvious vulnerability. At least, there are several moments when Kansuke's physical difficulties are obvious, and yet he still maintains an almost exaggerated aggressive quality. It reminds us of Kurosawa's only critique of Toshiro: that his voice was too "rough". The scenes with Princess Yu are a good juxtaposition, in that suddenly he is diminished and becomes almost servile: "Anything you wish is my command," and several variations thereof. We at the PPCC liked Princess Yu's character very much - she was a lady in charge! - though we didn't find Yoshiko Sakuma particularly charismatic. The same goes for Kinnosuke Nakamura, who played Takeda, and generally came across as slimy and unlikable. Takashi Shimura, another Kurosawa alumna, appears in the background - but apart from being a comfortingly familiar face, he doesn't have much to do at all.

We should note, however, that while the filmed is filled with sweeping shots of beautiful landscapes, and often the geometry in the scenes is admirable, there was a certain emotionally cold quality. At least, we had difficulty at times following all the historical twists and turns - no doubt this would have been an easier film to follow for someone who had some background knowledge. Similarly, the non-relationship between Kansuke and Princess Yu leaves a lot to be desired. "For the love of God, just say it!" we often cried, but to no avail. Also, while we've often enjoyed the music in such similar samurai swashbucklers as Rashomon or Ran, the music here seemed to drift between emotional cues.

Anyway, it's all lovely if you love Toshiro, which we do. Also, the sheer awesomeness of the setting and costumes is great fun - one of the few films which succeeds to bring out an independent universe, so that we could believe that there is much more that we are not seeing.


Clip - Samurai Banners
Uploaded by AmberCeca
An excellent scene: the assassination of the ruler of Suwa. The best moment is in the end, when the assassin kneels before the ruler of Suwa and declares, "Sir, I have been ordered to kill you."
Posted by a ppcc representative at 18:05