In his review of Shyam Benegal's Kalyug, University of Iowa's Professor Philip Lutgendorf notes that


...KALYUG will not really work for viewers who are not already conversant with the [Mahabharata's] main story of the relationships and conflicts between two rival sets of first cousins. A hastily-sketched family tree in the opening sequence lays out the main characters; their epic parallels are immediately apparent to those in the know, while their sheer number can only overwhelm the uninitiated.

The PPCC is unfortunately entirely ignorant regarding the Mahabharata; hence, if you are looking for an incisive, intelligent commentary on Kalyug, you would do better to read Prof. Lutgendorf's review. If, however, you'd like to hear the impressions the film made on someone who couldn't distinguish between Dhal Raj and Bal Raj and Bharat Raj, you've come to the right place. 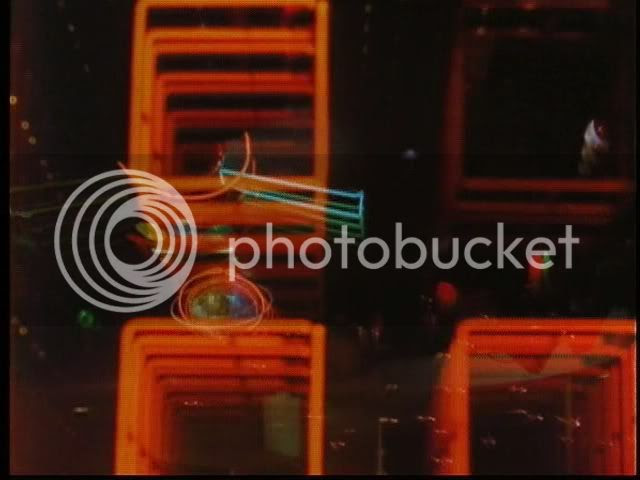 Early 80s disco. We could understand that much.

Shyam Benegal is a PPCC Approved Director. Back in the day, when we knew nothing of Shah Rukh Khan and the glories of mainstream Bollywood, we at the PPCC were art house puritans. We would watch only that which starred Naseeruddin Shah or Om Puri, and, if Shyam Benegal was directing, the movie earned an extra star. As is the nature of things, we've now come full circle - guided back to the capable artistry of Benegal via our most recent faux husband, Shashi Kapoor. Kalyug was Shashi-produced and Shashi-starred, and we must shamefully admit that this time, we bought it because of Shashi's name on the cover, not Shyam's. Sorry, Shyam. 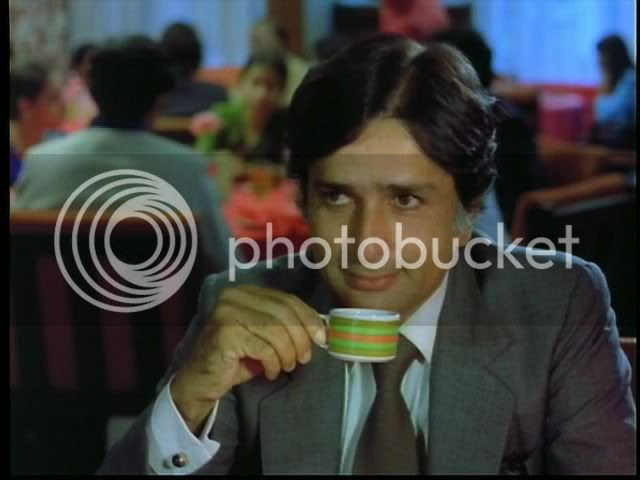 Don't quite understand what's happening, but check out the hottie and the cute teacup. 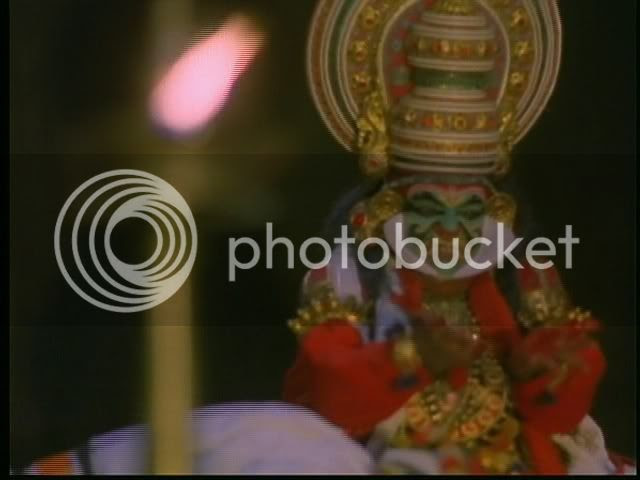 And what was all this about?

Anyway. The plot. We didn't really get much of this. As far as we could tell, there were two, vaguely related families - the Puranchands and Khoobchands. Both families owned big-shot engineering firms, and, as is the style of movies featuring cut-throat competition among engineering firms in 1970s India, poor Shashi Kapoor was stuck in the middle. Everyone was related to each other except for poor Shashi, who was an outsider and a loner, kept around only because of his zest for business. Many scenes of the three Puranchand brothers arguing and Shashi looking awkwardly excluded ensued. 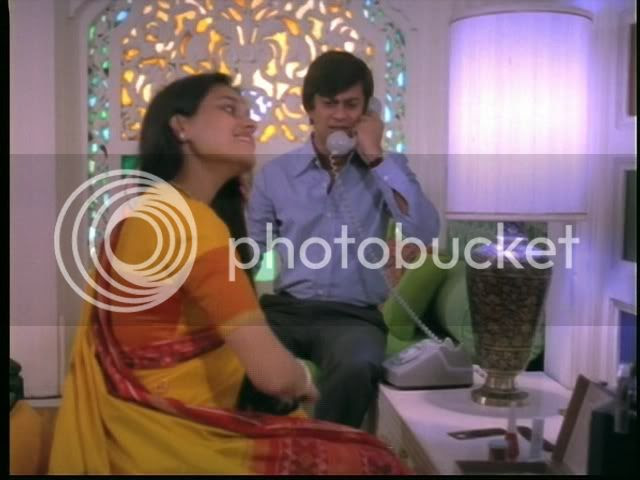 Blah blah, I am a brother, the plot is moving forward, something is going on... 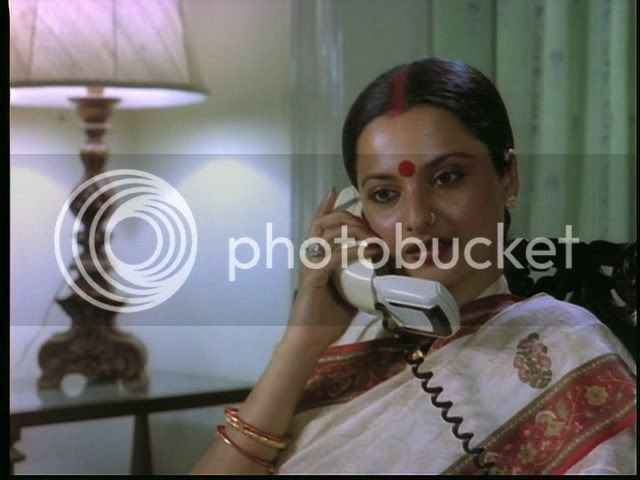 ...I also have motivations, as I am on the phone yelling a lot. I, being Rekha, am also an important character. Why, though, I do not choose to explain. 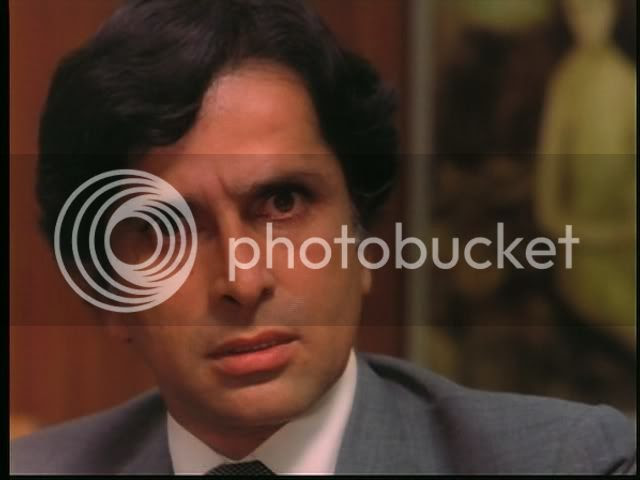 No one listens to me.

Until it was revealed that Shashi was related to someone after all! This being revealed a little late, when the business rivalry between the two families has now turned bloody and claimed two lives, leads to some anxiety on Shashi's part. Many scenes of angst ensued. 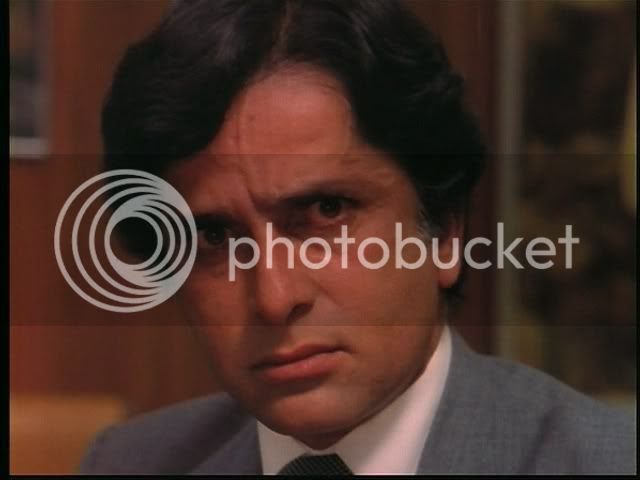 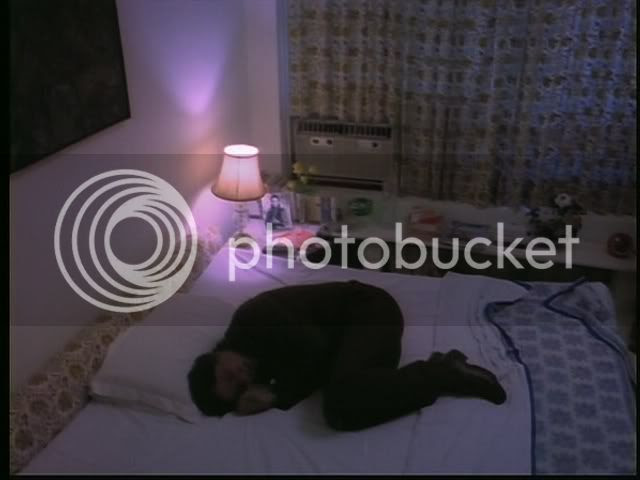 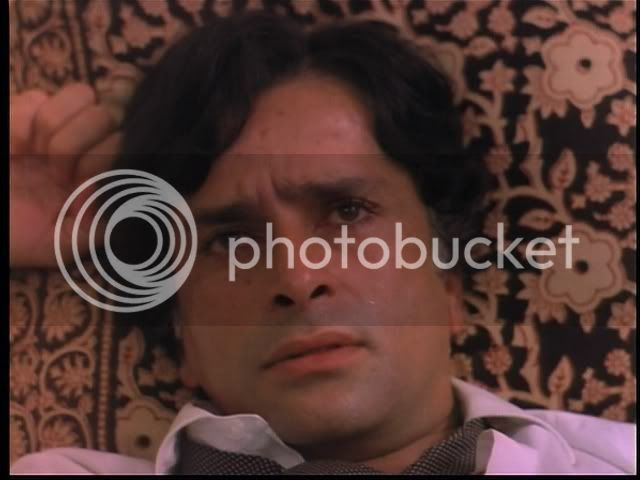 And yet more angst.

This is all very understandable, as scenes of funerals preceded the scenes of angst, hence implying that Shashi's life was in danger. The end, which comes after several dragging scenes of yet more ambiguity, is bleak and hopeless. Even Kulbushan Kharbanda, who was playing Bal Raj (or was it Dhal Raj?), the hedonistic, fun-loving brother, was reduced to monotone seriousness.

But let this not influence your decision to watch this movie, PPCC reader! In fact, let this review be only a reflection of our ignorance, because there were so many moments in the film which seemed significant, even to us, that surely there must have been whole oceans of thematic undercurrent. Consider: throughout the film, Kulbushan's character repeats, "This is the limit!", while another character says repeatedly, "Well, what's happened has happened." What are these two mottos supposed to represent? Were they snatches of a mantra from the original Mahabharata characters? What did they signify? Similarly, Prof. Lutgendorf's review mentions that, in the original, Shashi and Rekha's characters were supposedly lovers. In Kalyug, this is represented by a single scene in which both characters are captured by a video camera together at a party. This should demonstrate how only a viewer who knew to look for shades of the original could really understand and appreciate this film, perhaps both in how it adhered to the original's plot and how it re-envisioned it.

In terms of performances, everyone was fine. Shashi was restrained and angsty for much of the film, very unlike his boogying mainstream trademark. Rekha had very little to do, other than appear bitchy, something which was never explained. Raj Babbar as the eldest brother was wonderfully Zen-like and calm, but we've never actually seen anything with Raj Babbar (apart from his brief appearance in Umrao Jaan), so maybe he just is really Zen-like and calm. Kulbushan impressed us very much again, since we've now seen him run a lengthy gamut of emotions (and we've also been thinking how good he was in Jodhaa Akbar). That one brother guy from the first photo was decent, though also kind of a jerk (why?). Oh yeah, and Om Puri appeared briefly as a union leader, but then was hit by a stone and disappeared. 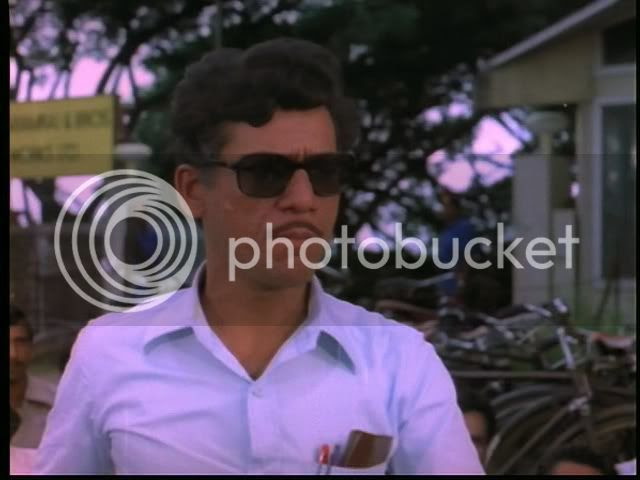 I am an anchor of familiarity, but unfortunately a stone is on its way.
Posted by a ppcc representative at 21:13

I adore this movie.
Yes, the plot could have been more cohesive, and the characters could use more depth all around.

BUT I spent my time thinking of all the Mahabharta connections while watching, which made it fun (yes I am dorky like that).

AND it is hard to ignore the huge ensemble cast interating together, with a super hot Shashi sexily greying at the temples (personally I like this look of his best- same as his older look in Kabhi Kabhi- oooh :D

I didnt like Rekha's look- dont get her penchant for that huge bindi- dunno what that is about.

I love this movie too! Its a really beautiful movie and I agree with Shweta that Shashi looks great. But, have to agree with Philip Lutgendorf that it doesnt work for anyone who isnt familiar with the Mahabharata. For those who are, its very interesting to deduce what the characters in the epic must have felt and done in modern settings without their mythical powers. You'll probably like Junoon better - Shashi doesnt look so good there but the story is not as topical as this one.

I love finding more and more people who love Shashi! Huzzah! But I must state for the record that I find him more hot in Junoon than in his older self in Kabhi Kabhie - but only physically, as his character is repellent.

Anonymous - Easy, tiger! I definitely understood about 3% or 4%.

wow. your review sucks even more. you've taken sarcasm and ignorance on a whole new level.

Kiran Saha - More than what? And I think you mean "to a whole new level".

I am a Post-graduate research student at Sardar Patel University, Gujarat and I am in utmost need of the copy of the movie 'KALYUG-1981'(CD/VCD/DVD)directed by Shyam Benegal.I have tried to avail it from different sources but its unavailable. Please mail me at arindambanerjee001@gmail.com or message me on +919998113903.

I am a Post-graduate research student at Sardar Patel University, Gujarat and I am in utmost need of the copy of the movie 'KALYUG-1981'(CD/VCD/DVD)directed by Shyam Benegal.I have tried to avail it from different sources but its unavailable. Please mail me at arindambanerjee001@gmail.com or message me on +919998113903.

Doesn't work for people who don't know the Mahabharata? Couldn't disagree more. This movie has a timeless and universal theme. The acting is surprisingly good especially for a time when overdoing was norm. I agree that the characters, perhaps just because of their sheer number, are not well etched. While all major parts are played to near-perfection, you do wish a whole bunch of them were given more screenspace.
I was actually surprised to discover, when I recently chanced upon this movie, that a mainstream Bollywood film was capable of subtilities (like the many that exist in this movie). If this movie wasn't a blockbuster (guess it wasn't), it's no surprise.
-Aru.