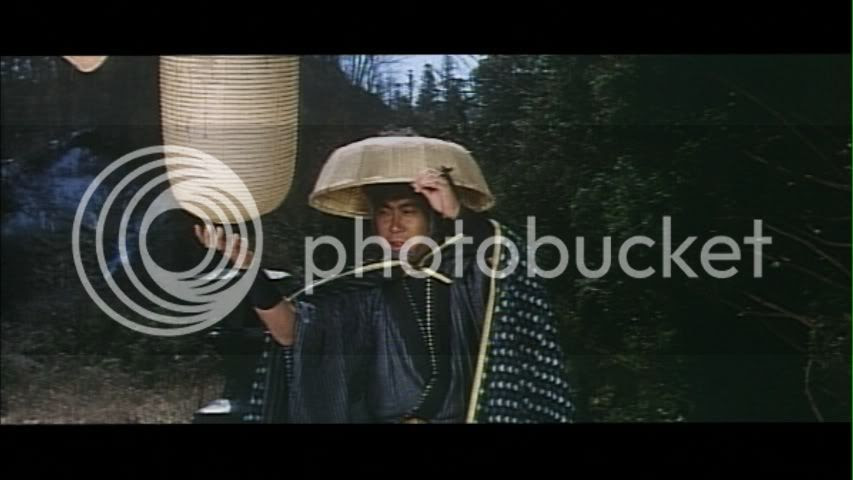 He just got bonked in the face by the lantern.

Jazzy and stylish, Machibuse (Incident at Blood Pass) features a fun ensemble of varying low-lifes and losers, helmed, as usual, by Toshiro Mifune's gruff and contradictory nameless Yojimbo (bodyguard) character. Like the original Star Wars films, here we are introduced to a whole new world from the bottom-up. That is, society as seen from the very edges of it, from the point of view of the dregs and outcasts. 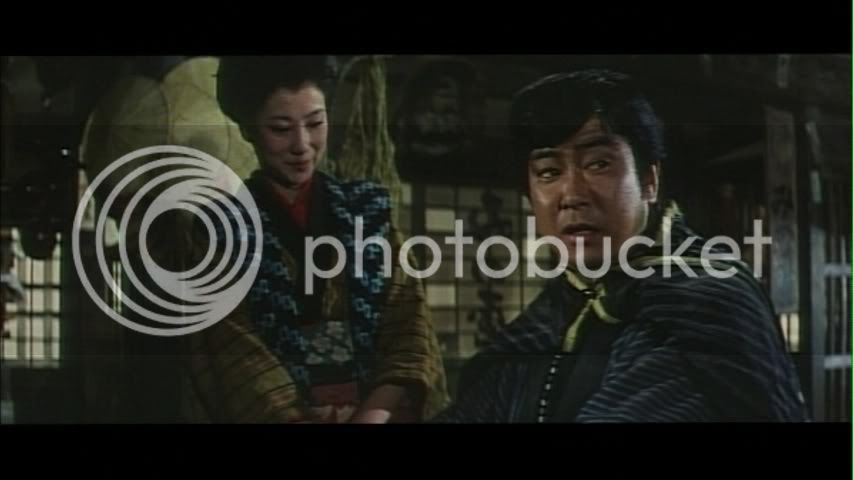 Bimbo and Gambler. OMG Gambler was so adorable.

The story is winding, but never difficult to follow. In the beginning, the nameless Yojimbo (Toshiro Mifune) is given a task from a nameless employer. The employer explains that Yojimbo must go to a mountain pass and "wait for something to happen". Yojimbo, ever unflappable, heads for the pass. On his way there, he saves a woman, Okuni (Ruriko Asaoka), from her abusive husband. He helps her to flee and drops her off at a nearby teahouse, run by a bimbo (Mika Kitagawa) and her grandfather. At the teahouse, we meet a handsome, young gambler (Yûjirô Ishihara) and a Discredited Doctor (Shintarô Katsu, of Zatoichi fame). A detective (Kinnosuke Nakamura, from Samurai Banners) barges in, dragging a thief in tow; both very wounded, they collapse onto the floor. The gambler meanwhile slaps Okuni, sparking Yojimbo's rage. The doctor refuses to treat the wounded men. Okuni is falling in love, hard-core, with Yojimbo. Hilarity ensues. 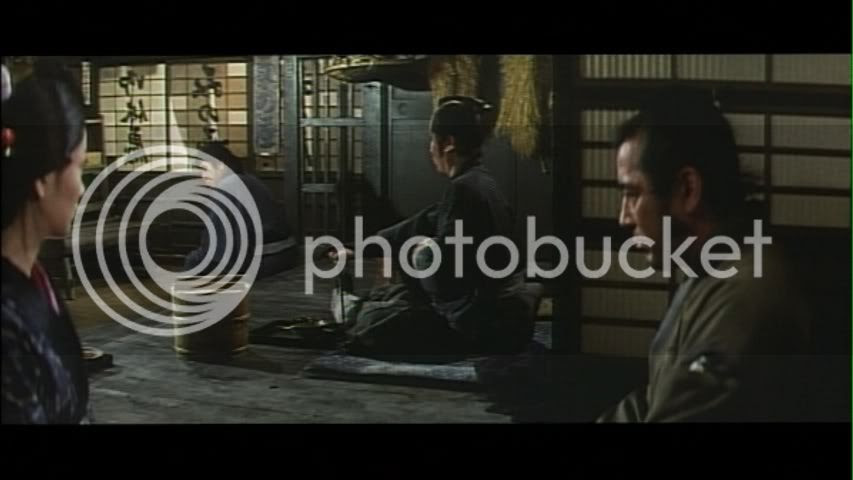 The foreground is eavesdropping on the middleground. 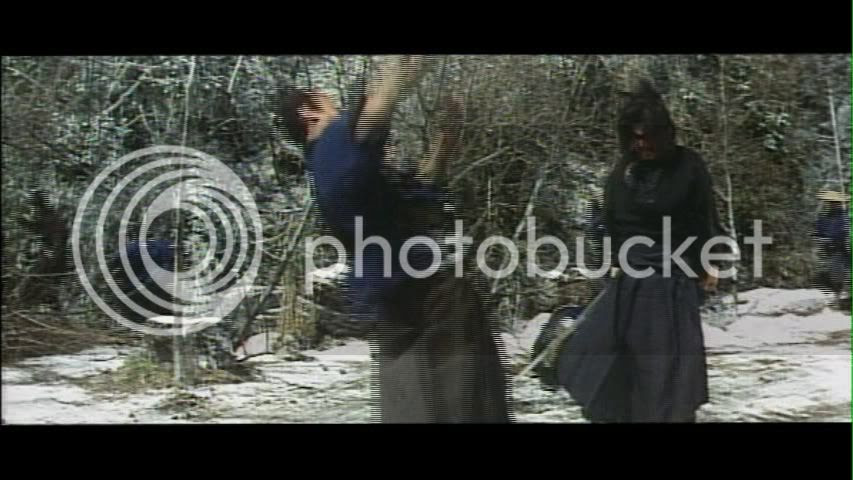 But things become hairy for Yojimbo when he finally learns what his task is. In true individualist, everyone-be-damned style, Yojimbo decides he'll do whatever he damned well pleases - and ends up surprising spectators left and right. This delicious ambiguity is a source of much pleasure and jocularity: oh ho ho ho. Lovely! And while this film's Yojimbo is a lot mellower and more mature than the cynical, hard-drinking, grimy Yojimbos of Yojimbo, Sanjuro, and Zatoichi Meets Yojimbo, he's still got that particular Yojimboey charm. And that Toshiro Mifune-y ability to look archly skeptical, dismissive, ironic and uncomfortable - ALL AT THE SAME TIME. Magnificent! 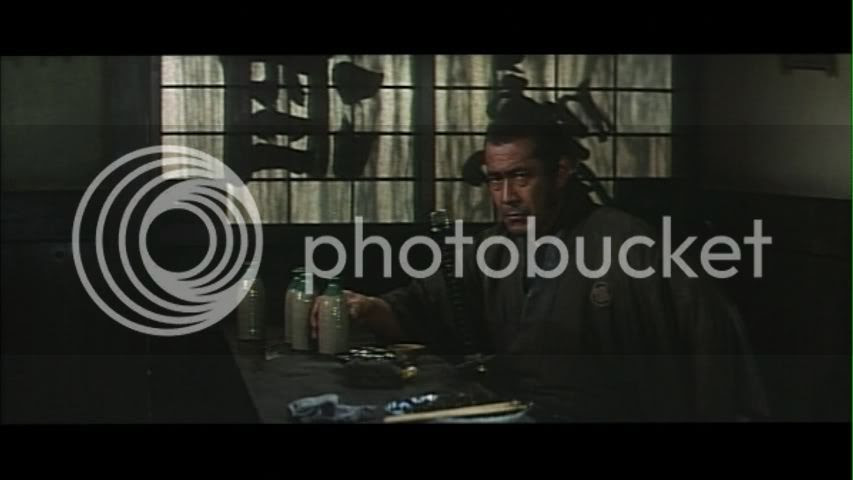 See, because the fun of the Yojimbo character is just that: he is a cynic surrounded by idiots, and he both loves and hates being right all the time (kinda like the Jeff). At times, the world seems so damned awful that poor Yojimbo must retreat into a sake bottle and issue his grumblings from there. (This is especially the case if women are involved, though, Yojimbo, like Amitabh Bachchan, was usually much too manly for romance.) At other times, he finds it quite funny - in a sarcastic, black humor sort of way. And all the time, Yojimbo proves himself to be a bad-ass, insanely aggressive and yet very sane, always expelling the minimum energy required to dispatch an idiot enemy, always smirking into his shoulder, sharing a joke only with himself and with the audience.

And what's even better - Yojimbo is morally ambiguous! While the PPCC would argue that the core of Yojimbo is highly ethical, he is not above stealing or betraying or punching people in the face. And people make lists about Chuck Norriss, tut! In Incident at Blood Pass, this moral greyness is on display: we are genuinely unsure of whether Yojimbo is going to betray everyone or not, and then, when he decides what to do, he further confounds us in how he treats the Demented Doctor. This will all make sense when you watch it. And the last scene, when the Officer says, "I think you might want to say something to Okuni," and Yojimbo's reaction - priceless! Katsu in a very un-Zatoichi-like role.

But, as we said at the top of this review, the joy of this film is its ensemble of archetypes. Everyone is fun and perfect, filling their own little niche well. Stand-outs include Yûjirô Ishihara as the young gambler, who was just as scrumptious as a slice of pie, and Shintarô Katsu as Discredited Doctor, who was almost Toshiro Mifune-like in his ability to be SO fundamentally different than from his usual Zatoichi character. 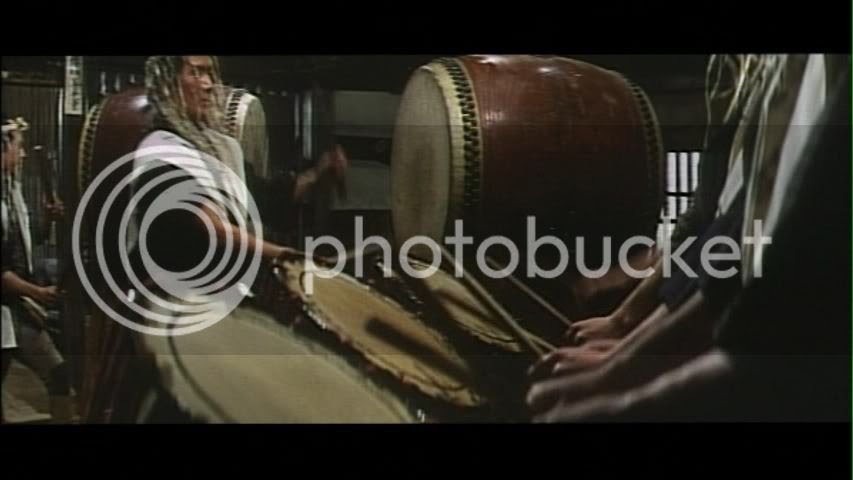 A note about the music: it's great.

A note about the DVD: This DVD can be bought as part of the Toshiro Mifune: The Ultimate Collection - a very good buy, since it includes five lovely, non-Kurosawa Mifune classics, and every DVD comes with liner notes that explain the historical context. So awesome!

Posted by a ppcc representative at 19:26