First, a funny meta story: For many weeks, a Friend of the PPCC had been badgering the PPCC to go get a pedicure, since the local pedicurist kept telling the friend that the pedicurist had a Shashi movie for the PPCC. Long ago, the PPCC had gone for a pedicure, and, oh, the fun we had, discussing Shashi this and Shammi that. Anyway, the PPCC was skeptical - a Shashi movie we had not yet seen? Ha. But today the pedicurist delivered (and how!): a double-whammy of Shashi/Rekha films, including Gulzar's notable Baseraa and the Shashi-Rekha-Pran Do Musafir. Yes. YES! One, a movie with a thoughtful, early 80s Vijeta-era Shashi, all greying temples and wormy moustache (YEAH! we love that look!). The other, 1978 and including PRAN. Could it get any better?! 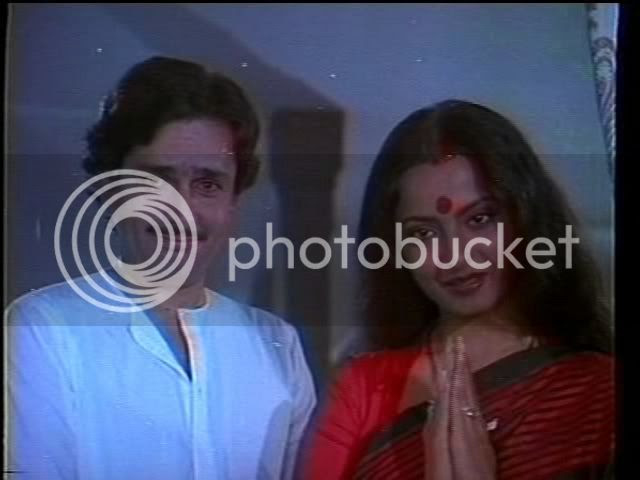 No, it clearly cannot get any better. Shashi and Rekha are fab! And remember Koncam Koncam?! (Ooh-ooh-ooh!)

By the way, India Weekly: it's been a month now, and we are still waiting on Vijeta. Any day now. Any day now.

The real review: First of all, large kudos to Gulzar for tackling a thorny, oft-mishandled subject - mental illness - with sensitivity and sympathy. Baseraa is a quiet, unassuming movie that instantly appeals by combining (1) the painful emotional ironies of your standard, squishy masala dil with (2) interesting variation, intelligence and maturity. It reminded us a lot of Masoom, in that it was a naturalist portrayal of domestic life gone horribly awry. Also, like Masoom, the narrative structure was like an onion: as things progressed, important points were revealed, layer by layer. This was in startling contrast to the usual 1970s masala convention of beginning immediately on a prologue/info dump. Baseraa, instead, often teases you with allusions to unknown past events which are only later explained. Despite our love of straightforward, populist masala, we at the PPCC are actually BIG BIG fans of zero exposition. We like to work for our narrative. Hence, we were lovin' Baseraa. 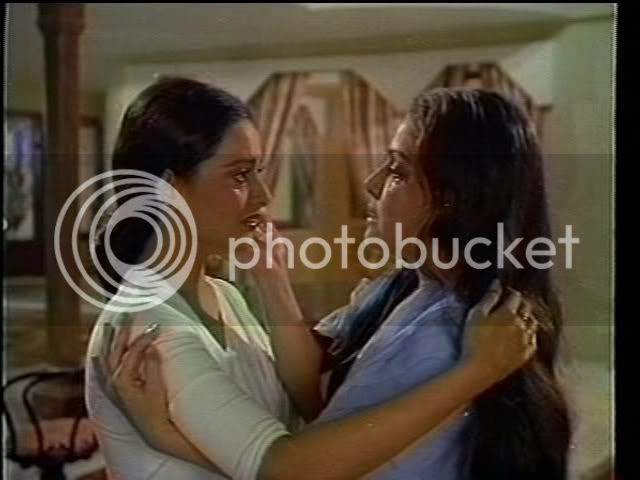 Have Rekha and Rakhee been in anything else together? They were fab! 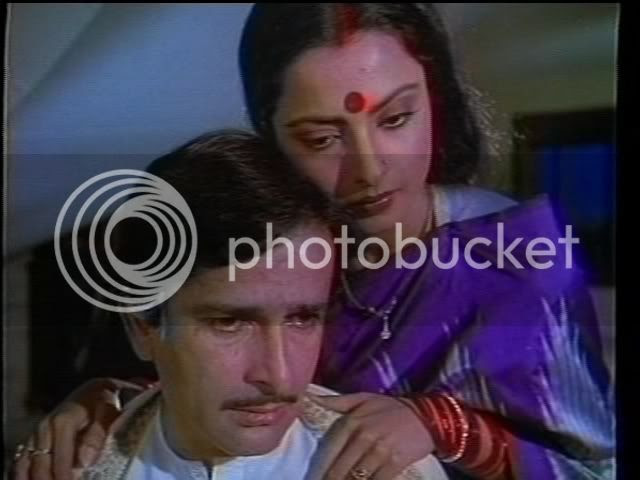 The story follows the your usual happy family clearly on the way to destruction. There is, as per usual, the jolly father, Balraj (Shashi Kapoor), the good-humored mother, Nima (Rekha), and their two sons, Sagar (Raj Kiran, who played Shashi's romantic rival in Bezubaan released the same year) and Babbu (Master Vikas). Sagar is now of marriageable age, and he has fallen in love with the pretty, smart med student Sarita (Phoonam Dillon). Sarita is clearly your Perfect Daughter-in-Law, and in one sweet scene, she stuns the family by singing early morning pooja. The parents heartily approve, and all seems well. 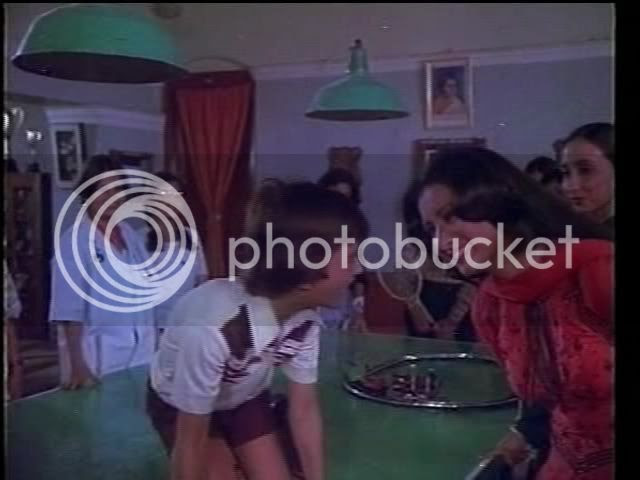 There's even a children's song, like the one in Masoom.

However, already there are cracks in the perfect façade. It is revealed that the mother of Sagar is actually Sharda (Rakhee, real-life wife of Gulzar) - Balraj's first wife, Nima's older sister. Fourteen years ago, it seems Sharda had been having psychotic episodes. Eventually, she had to be taken to the local asylum. The family still grieves for Sharda, and they are in close contact with her doctor, Dr. Gokhale (Iftikhar, who is always in everything!). Sharda has recently had a minor accident in the asylum. When she recovers, however, her mental illness seems to have dramatically improved, and Dr. Gokhale decides to try to continue the improvements by sending her home to heal. He informs the family, however, that Sharda's mental health is fragile, and so no big emotional shocks, please. Ergo, Balraj and Nima must revert to their roles from 14 years earlier: Balraj as Sharda's husband, and Nima as a widow. The rest of the film watches this impossible drama unfold. 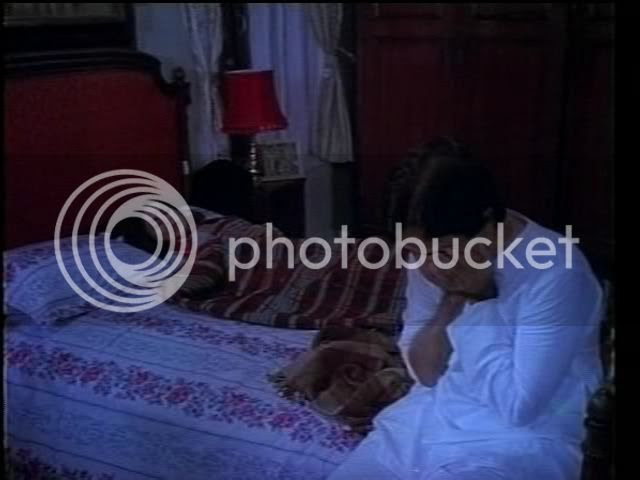 There is much angst, as you'd expect. 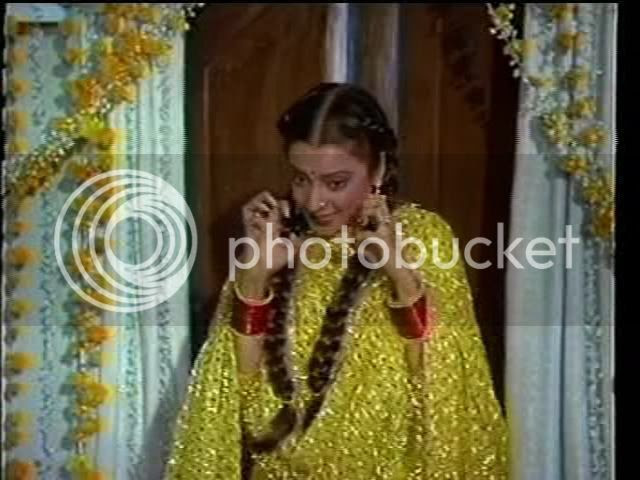 Which is juxtaposed nicely against flashbacks where everyone was a lot happier. Rekha, in particular, is so much fun when she's allowed to be a bit crazy! (e.g. her Punjabi disguise with Amitabh in Suhaag!)

The weakest point of the film, for us, is the somewhat tenuous tension. Sharda's mental illness is never specified, and Dr. Gokhale's advice that everyone must pretend it's fourteen years ago is a little hard to believe. Sure, it must suck to be Sharda, when your sister has wed your husband, but we couldn't really imagine her going demented over it - at least, the movie seemed far too realistic to resort to such a filmi convention. Another weak point was the misguided use of whatever drum that was. It was your standard comedy slapstick drum sound, but they kept using it whenever they needed to emphasize a tragic point.

Nonetheless, the film was so well done in other ways that we overlooked the kind-of-silly plot idea and the drum. Rekha, Rakhee and Shashi all gave good, honest performances - in other words, they were in their 'Parallel Cinema' modes, which we love! But the best aspect, for us, was the portrayal of Sharda's mental illness. Rather than exploiting it for laughs or demonizing it, Sharda's illness is portrayed as just that - an illness. In one poignant scene, Balraj loses patience with Sharda, and she reminds him that she never wanted to be ill, and she hates it as much as he does. Another effective scene is in a brief flashback, when Balraj and Nima remember the day Sharda was taken away. In a very long tracking shot from the bedroom, down the stairs, to the living room, the camera follows the tumult as hospital workers restrain Sharda, while her husband and her doctor try to calm her. It's very painful to watch, and thankfully it is presented honestly and straightforwardly, with little melodramatic embellishment. 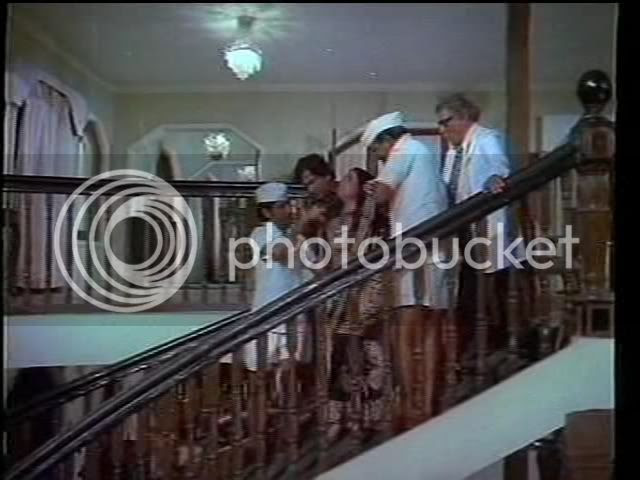 The most painful scene, done with a great tracking shot. 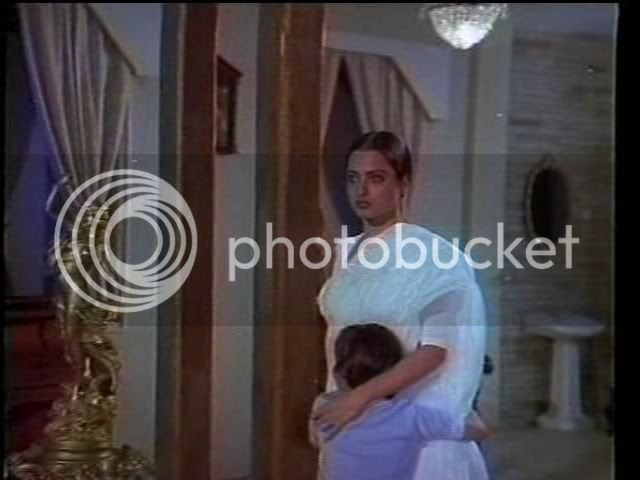 Poor Rekha, too! Poor son! Poor all of you!

The songs were mostly OK, with our favorite being the one where Balraj remembers his life with Sharda. It had a lovely haunting quality, relying mostly on Lata's voice and the piano. But we don't feel confident to judge the songs or the dialogue, since Gulzar is always lauded as being such a poet, and yet we can't understand Hindi all that well (and our subtitles kind of sucked too).

Overall, we've been really enjoying these early 80s Shashi films. After all the excitement of the 60s and 70s, they are a welcome respite. One of these days, we'll make a list of our favorite Shashi movies, and a lot of these 80s movies are definitely going to show up. And ARRGH India Weekly! Now we're dying to see Vijeta - especially after this wonderful clip and after learning that it was directed by Govind Nihalani, who directed the powerful Droh Kaal! Aaarghhh.
Posted by a ppcc representative at 23:15

after reading most of your blog with great interest and much enjoyment (and firmly holding you responsible for my recent Shashi-movie buying spree) I have gathered the courage to comment. Mainly to say, that there is another movie with Rakhee and Rekha, called Zameen Aasman. It even has Shashi, but he spends most of the time as a garlanded picture on the wall. I think it has recently become available on Dvd with subtitles. I have only seen it as a Vcd, but the two were really, really good.

The most memorable film with Rakhee and Rekha that I can think of is Muqaddar Ka Sikandar (and ppcc---have you not seen that??? You really must!). Shashi isn't in it but Vinod Khanna is! and Amitabh of course.

Also they were both in Kasme Vaade which I only dimly remember for some reason.

This looks like a good one :-) Good luck with India Weekly! (try emailing them, I have had good luck with that in the past I think with them)...

Hahaha, another one bites the dust! Who's getting the toaster? (Is that a reference non-Americans are going to understand? Hmmm. Sorry if not.)

Gebruss, be brave! You're super awesome - I have photographic proof from Munich - and should comment more everywhere!

Anyway, this does not sound like a movie for me, despite Shashi and Rakhee. I echo memsaab that Mukaddar Ka Sikandar is super fantastic.

Great screen-caps! Saw this movie years ago and thought that Shashi and moustaches didnt go together at all. Thats one reason why I havent revisited Vijeta either, and it is a beautiful movie. From your screen-caps its clear that I will have to rethink my opinion. :-)

Beautiful Shashi or no, Basera is never going to be one of my favorites. If I remember the film correctly Sharda (Rakhee) loses her sanity when she sees her sis (Rekha) in widow's weeds. She is perfectly fine before that - wouldnt call that a sensible portrayal of insanity. And should widowhood provoke such extreme reactions?

Memsaab, did you mean Kasme Waade (1978) had Rakhee and Rekha? As far as I know it was Neetu Singh with Rakhee, there.

Gebruss - Welcome! Thanks for commenting, and please don't feel shy - we at the PPCC love comments! I'll have to check out Zameen Aasman now - Rekha and Rakhee are so great. But garlanded Shashi? Uh oh, that doesn't bode well. You'll have to keep us informed about any Shashi movies we're missing!

Memsaab - Oooh yeeeeah, they are both in Muqaddar, aren't they? I had totally forgotten. That's a fab movie! But I must have blanked Rakhee out in that, since I really disliked her character so much in it. Ahh, and Vinod is always welcome.

Also, I think Bollyviewer's right - Kasme Vaade is Rakhee and Neetu, I believe. Thanks for the IW tip!

Beth - Uh oh, I've got a good bit of American in me but I didn't get the reference. Woe. Yeah, Muqaddar is so wonderful. It has one of my favorite Rekha numbers in it - Salaam-e-ishq! Sigh.

Bollyviewer - Awww, see, I LOVE Shashi with the little pencil moustache. He looks so classy! I actually really want to see Prem Patra after (1) reading your review of it and (2) seeing a young, moustached Shashi. YEAH.

Oh my, totally agreed that widow-provoked mental illness is not terribly agreeable, but I had somehow missed all this. As I understood it, the two (Rekha's widowhood and Rakhee's mental illness) were unrelated - though, of course, Rakhee did have a bit of a spell after seeing Rekha in the white. Uh oh! Have I completely misinterpreted the film!? I blame the subtitles.

Do you know, when I first saw Karan Arjun I thought Rakhee was Rekha? When someone pointed my error out at BollyWHAT I think I literally blushed. Do you think their scenes together in the movie make the whole thing worth watching? I usually avoid mental illness stuff because it's so wrenching but I really like girl-bonding.

Kasme Vaade does have Rekha in it...but it's a guest appearance and so doesn't count! See, I told you I only dimly remembered it :-)

Ajnabi - Hey. I thought Shashi Kapoor was Shammi Kapoor until, like, the other day. Unfortunately, I can't say that Rekha-Rakhee have enough scenes together to outweigh the painful drama of the film overall; also because their interactions are mostly negative, in the sense that we're constantly worried about Rekha dropping the ball or something.

Memsaab - Ah, of course you're right! I had forgotten. Uh oh, sounds like I'm the Rekha apologist too! I love Rekha, but she's a very different vibe than Neetu - they're both wonderful!