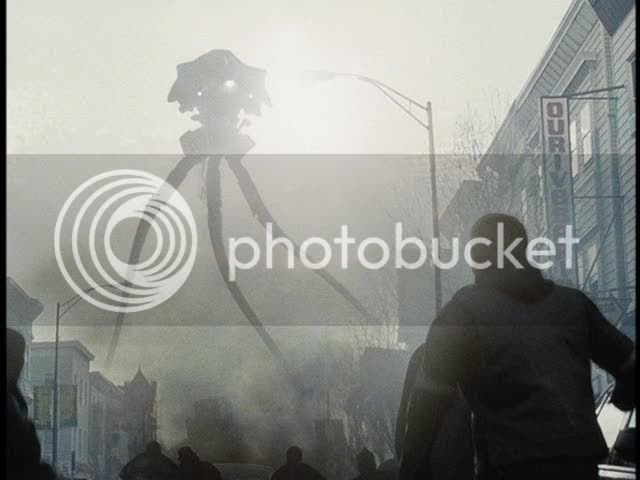 Ahh, there's nothing quite so satisfying as a disaster movie.

What is it about this genre? Isn't it a little twisted that we audience people love watching epic-scale destruction? All those screaming, thronging mobs, the collapsing buildings, the exploding highways? Why do we love it?

Maybe it has something to do with good ol' Aristotle and his notion of catharsis. All that pent-up emotional energy gets spent in a safe environment, where we watch horrible things from a detached distance and are able to feel controlled levels of fear and pity. But if you've ever found yourself laughing maniacally when the alien beams make the buildings explode - not that the PPCC ever does, but we're just saying, hypothetically - then you wonder about the pity part. 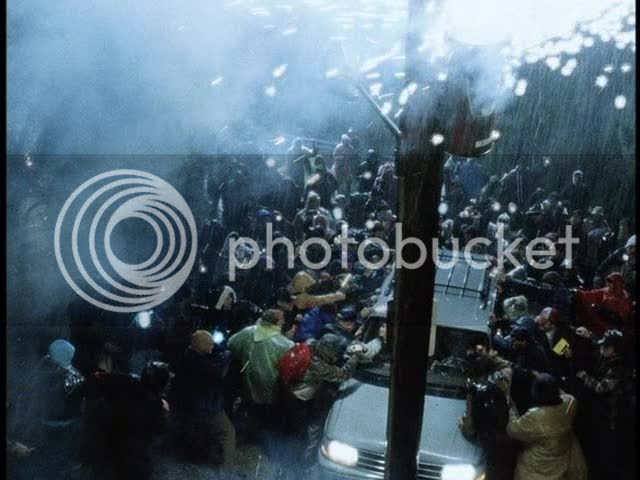 In 2005, Steven Spielberg and Tom Cruise reunited again for some more sci-fi fun: a modernized adaptation of the classic H.G. Wells book, War of the Worlds. For those that haven't read the book or seen the 1953 film adaptation, the story is simple: malevolent Martians launch an Earth-scale attack, presumably to colonize us, but maybe just to kick our butts because they can. Using lumbering tripods, they go from city to city, vaporizing crowds left and right. In Spielberg's version, the protagonist is transplanted from the turn-of-the-20th-century English Midlands to turn-of-the-21st-century American New England. Ray Ferrier (Tom Cruise) is a macho, grown-up boy who apparently has weekend custody of his kids, Rachel (a very cute Dakota Fanning) and Robbie (a very pretty Justin Chatwin). With the usual Spielbergian eye for comically imperfect domestic life, Ray and the kids are off to a rocky start. Things get rockier when a huge Martian tripod emerges from the downtown intersection. 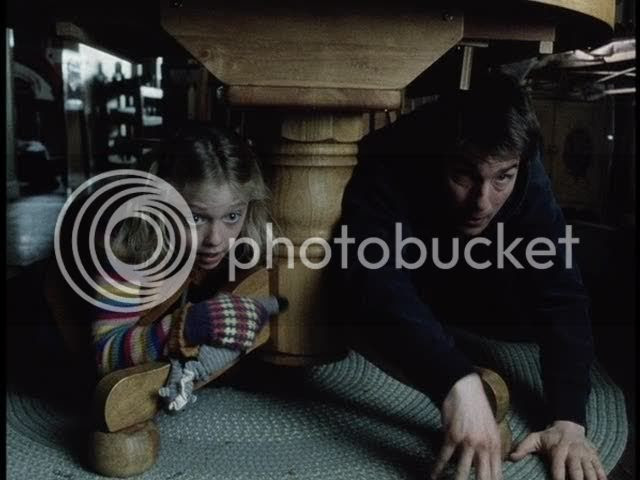 Ray is just the third kid in the beginning. 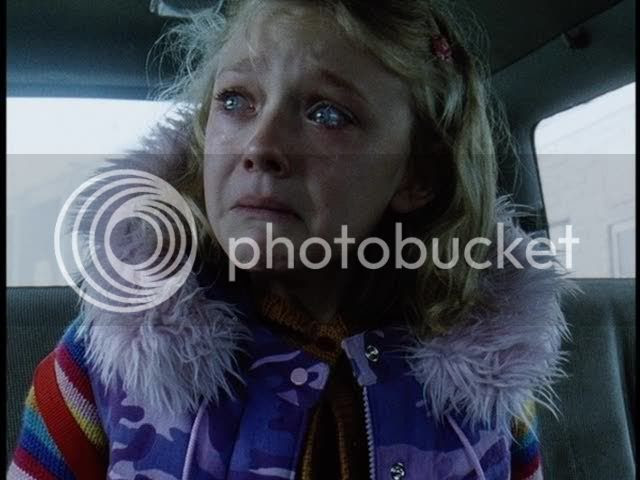 Awww! Poor little Dakota, someone save her!

And the action is on! Ray becomes the audience's everyman/witness, as he manages to evade vaporization and numerous other grisly ends, all the while piecing together the truly mind-boggling catastrophe: the Martians have invaded! They suck human blood! Then they make blood gardens! OMG!! Ray's ex-wife, Mary (Miranda Otto), has gone to Boston, and he makes his panicked way from New Jersey to Massachussetts, hysterical kids in tow. Along the way, there are problems between Ray and his semi-estranged kids, problems between our protagonists and the angry mobs, and problems between our protagonists and a crazy man in his basement (a misused Tim Robbins). And along the way, there is much zapping and exploding and Tibetan horn blaring.

Most people the PPCC talks to seem to agree: this film starts off very strong and becomes progressively weaker. The nail in the coffin is the extended sequence in Tim Robbins' basement, which no one seems to enjoy. We at the PPCC still haven't figured out what is so wrong with this sequence - it makes sense in terms of narrative drive and all that - but there is just something about it which annoyingly deflates much of the fun. Ah well. 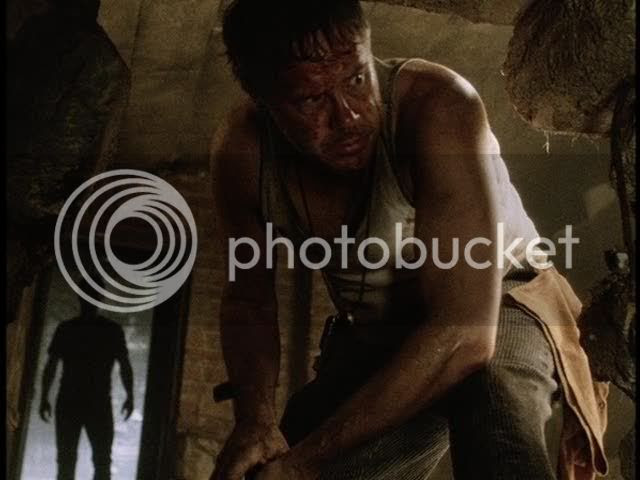 The rest of the film is great. Spielberg gives the story a classical, 1950s pulp treatment - with iconic images of backlit tripods on the horizon, with pink and green pulpy sci-fi lighting, with a straightforward soundtrack heavy on the brass section. One of the best scenes is when Ray, and we, first glimpse the tripod emerging from the pavement. After causing cracks all over the street and up the side of the church, causing the church facade to slide painfully into the sunlight, a tripod lumbers up into the air and blows a massive horn that sounds much like a Tibetan long horn. So exciting! It's a shame this iconic scene isn't on YouTube anywhere, but we did scrounge out at least a 30-second blip of the action. 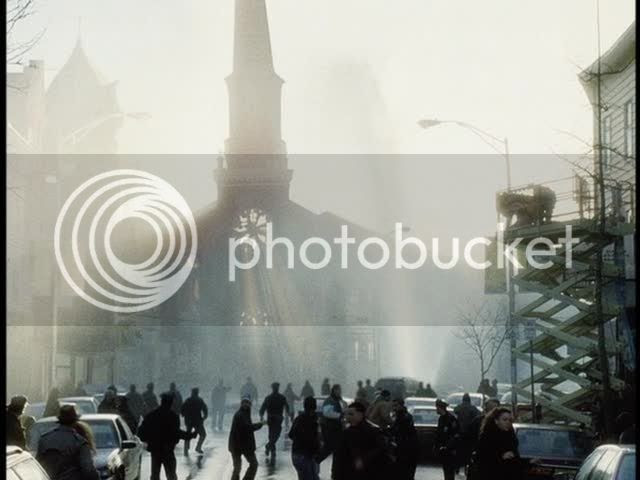 Amidst all this gargantuan destruction, there are also some revealing moments of humanity, at its best and worst. One particularly difficult scene occurs when Ray and his children are forced out of their car by an angry mob; indeed, this scene is almost scarier than any angry alien. One particularly heartening scene occurs when the young, heroic Robbie helps people into the Hudson River ferry while tripods loom ever closer. There's also quite a sweet development of Ray's character from tough-guy man-child to responsible father. As our hero, the wonderful critic A.O. Scott, says in his New York Times review of the film,

"Millions of deaths and incalculable property damage seem like pretty expensive family therapy, but it's heartening to know that even an alien invasion can provide an opportunity for learning and growth."

The film ends on a particularly optimistic note, with both large- and small-scale resolution. This might seem facile but, believe us, after all that nihilistic death, you'll be desperate for some good news! 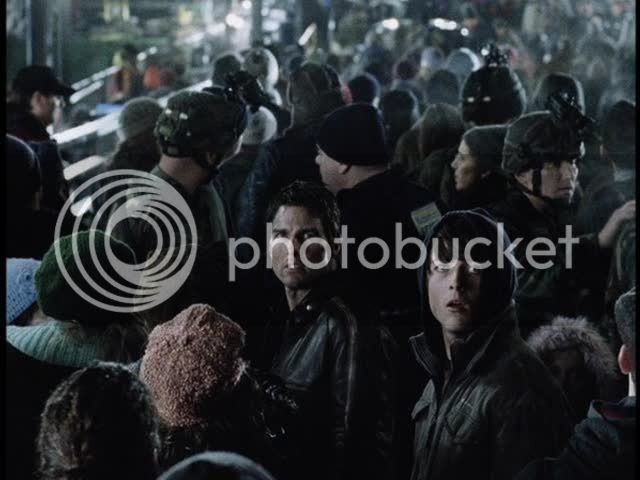 Like all good witness-protagonists, Ray keeps his eyes open when the thronging mobs do not. 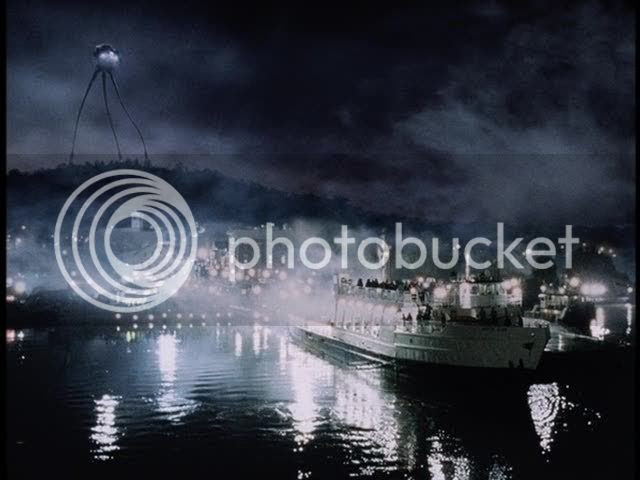 In terms of performances, Tom Cruise is fine, real-life controversies notwithstanding. He is very believable as Ray the grown-up boy in the first half, what with his aging, boyish looks, but it's hard to buy that he's really gruff and paternal. The kids - Dakota Fanning and Justin Chatwin - are also fine, in that they do much required screaming. Special note must be made of Justin Chatwin's really trendy costume design. Oh! He is just so cute. The trio's scenes of domestic awkwardness are also quite well-done, providing a welcome respite from all the action. Tim Robbins is the only other actor who features in any prominent way, and unfortunately it's his sequence which kind of ruins the whole film. Part of this might be his zany, quasi-camp performance as a nut in the basement; he plays Basement Guy as a very old-school, one-dimensional loon. 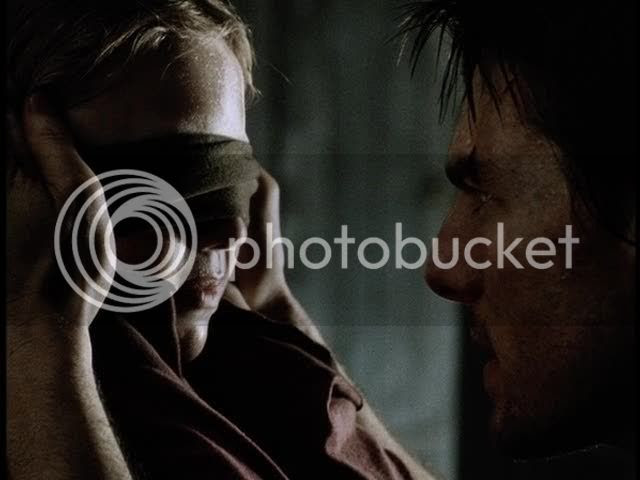 Ray finally becomes a responsible protector of his children. 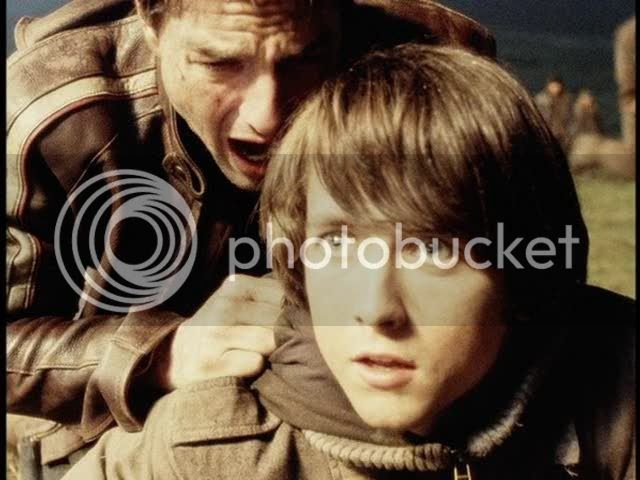 With varying degrees of success.

We enjoy Spielberg films - he has masterful control over the medium, and basically we always feel what he wants us to feel, whether it's paralyzing fear in this film or fun adventure-ism in Indiana Jones. So he makes for very entertaining viewing. We think the typical Spielberg motifs of combining small-scale domestic moments with large-scale awe-inspiring acts is very well on display here - indeed, the whole film is just that! - and another Spielberg motif of the "awed reaction shot" is used well. Oh, the horror! See Jurassic Park for more of the same. Raah!

Posted by a ppcc representative at 23:56

I love "Minority Report," but I detest this movie. I want my protagonist in disaster movies to be noble and the best humanity has to offer at heart. And plus I think the voice-over ending with--is it Morgan Freeman?--is pretty lame too. But most of the time I really enjoy Steven Spielberg too. He's the man.

Forgot to mention--Justin Chatwin *did* make a great impression on me with this film and The Invisible, though.