Memsaab's hilarious gift and our last review reminded us of a project we had waiting in the wings: 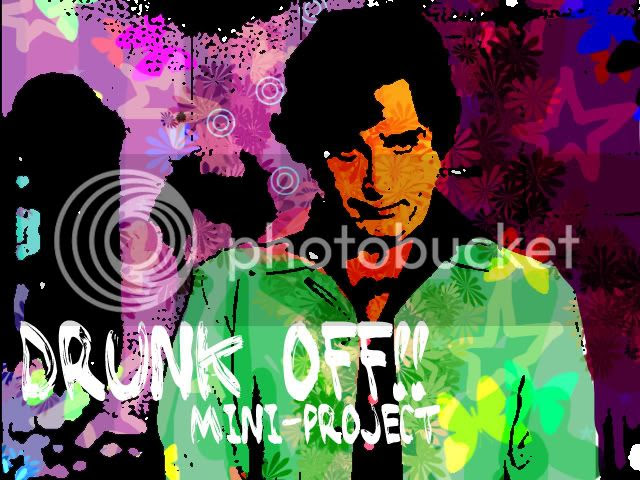 Readers of the PPCC became all manner of upset during the various Dance Off!!s - whining and complaining that their favorite actor wasn't well represented, that the PPCC was dictatorial, that the contest was a sham.

Well, the PPCC doesn't take such accusations lightly. Our reputation was at stake! So we decided to take care of it... tomorrow.

That was several months ago. Anyway, the inspiration for the Drunk Off (!!) was actually Swayamvar. A Friend of the PPCC and the PPCC were watching the hilarities, and the Friend of the PPCC (FOF-PPCC) commented, "Hmm, he's really a ham." The "ham" in question being our beloved Shashi Kapoor. Quick to defend our sab se bara hiro, the PPCC exclaimed, "Well, acting drunk is difficult!" FOF-PPCC agreed, saying, "Indeed. Perhaps that's a true measure of an actor's greatness." A light dawned. Yes, we thought, yes! It is!

The PPCC knows and loves four Indian actors most of all: Shah Rukh Khan, Amitabh Bachchan, Naseeruddin Shah, and our beloved Shashi Kapoor. All four have had notable scenes of drunkenness. They will thus now compete. For those of you that couldn't stand to see Shashi lose, here's your chance!

To open the proceedings, we turn to:

1. Shah Rukh Khan.
Things to note: By most accounts, SRK doesn't drink and is therefore unaware of what drunkenness feels like. This would explain his complete inability to play drunk realistically, and his frequent choice of just hamming it up like a piece of sinful ham.

Nonetheless we must admit that this song from Devdas is very appealing; as all things SRK, it is wonderfully choreographed, boisterous fun. Toss realism out the window and let's dance, yaar! Kudos also to Sanjay Leela Bhansali for lurching cameras which make us dizzy. And to Madhuri and Jackie, just because we like them so gosh darned much in this song.

Drunken Amitabh scenes usually feature a very tearful, sweaty-faced Amitabh. We don't know what this is about. Why so much moisture? What is he so upset about? Even when he's supposed to be happy, he looks upset! See Silsila, Amar Akbar Anthony and Suhaag for notable Amitabh scenes of drunkenry. We take our song, however, from the end-all, be-all of Amitabh drunkenry, Sharaabi (Alcoholic).

Despite being similar to SRK's spin-top OTTness, the PPCC loves this song and loves it when the brass band kicks in. And when Amitabh blows a kiss to the audience?! Best moment ever. And, OK, the song itself is actually pretty spectacular overall: Give us some love, love, love, love... O de de pyaar de pyaar de...

Like Amitabh's song, we take our Shashi song from the end-all, be-all of Shashi drunkenry, Naina.

We think these two get extra points just for gettin' down with their bad selves. And for Shashi's bizarre "Naughty!" and general lecherousness and undercurrent of sweet, sweet sadness.

OK, as usual, Naseeruddin Shah just shames everyone else with his nuanced, ultra-realist performances. Even in a relatively mainstream film such as Naajayaz, in what is essentially a remake of Amitabh's De De Pyaar De, Naseer still manages to make things real, mostly by underplaying it. And never mind that it's such a pretty song... Abhi zinda huun, to ji lene do! Bhari barsaat mein pi lene do! I'm still alive, so let me live! It's raining hard, so let me drink!

And if that doesn't convince you, Naseer has another excellent drunken song in that film of legendary sweetness, Masoom:

Now it's your turn, democracy lovers! While the PPCC will try to sway you (vote Naseer), it is up to YOU to click the right button on the right-hand side poll. Happy voting!

The votes are in and, yea, all is right with the world, for our beloved Shashi Kapoor has been recognized for the talent that he is! Who else can play a fabulous variety of drunken people? No one, the PPCC voter declares.

I had to vote Naseer for sheer realism; however, if we were voting for favorite performance rather than best performance I'd pick Shashi and whatshername all the way. That whole song is FANTASTIC. I have to see that movie.

Don't know about Shah Rukh but Amitabh has been a teetotaler all his life - never touched the stuff, by most accounts. Interesting given that some of his most audience-pleasing scenes in films were drunken ones. My five-year-old self beseeches me to vote for the "Chal Mere Bhai" song in Naseeb (with a drunk Amitabh and a cutesy, collegey Rishi Kapoor as his kid brother). That song was one of my anthems when I was a child.

I vote for Om Prakash and Johnny Walker...oh wait, they aren't included.

:-( I am sad to say that although I would like to vote for the Shash, I think Amitabh is an awesome drunk.

The Shash's drunken temper tantrum in Prem Kahani is priceless!

I voted for SRK, however, because I love his hammy acting in Devdas.

Are you doing a ladies drunk-off as well? I have some great candidates for you: Kajol in DDLJ, Shashikala in Phool aur Pattar, Helen and Nanda in Gumnaam, and Hema Malini in Seeta aur Geeta!

Ajnabi - Such is the case with me, as well! Naseer is just too good to deny. All the songs in Naina are magnificent, and I've watched each of them about 20 times. If you liked this song, also, you might enjoy Aur Nahin Bas Aur Nahin from Roti Kapada Aur Makaan - it has a similar vibe of forced cheer, brooding undercurrents, and weird 70s clap-happy partying ("Ha ha!"), however all sans alcohol.

Jabberwock - Regarding SRK's teetotaling, I think I read this in Anupama Chopra's biography - at least, I recall her talking about how SRK was deciding whether to method act Devdas a bit (!) - can't remember what he actually decided to do. Didn't know about Amitabh, but I'm not surprised! I think my favorite drunken Amitabh scene is his temple-top tantrum in Suhaag. Dying to see Naseeb now, too!

Memsaab - Om Prakash! When was he wasted?! And alas, I've only seen Johnny Walker in Chori Chori. I am sad to say that although I would like to vote for the Shash... Story of this blog! But he must win something - he MUST.

Filmi Girl - Ah yes, Prem Kahani! I need to see that, though Rajesh Khanna is sorting of putting me off. I think my fave drunken Shashi scene is from Namak Halaal, where he gets drunk and tries to woo that Amazon assassin woman, ahahaha! Thanks for pointing out the PPCC's gender bias, as always. Kajol in DDLJ is so fab, she would win it hands-down. Can't think of any alcoholic female characters, though, unlike our four sharaabi upstairs.

Shweta - Never seen or heard of Karma! What's it about?

Not fair! Nobody can compete against Nasseer. I think you are setting up our mutual favorite to loose! :-( Well... will vote for Shashi since nobody else seems about to...

My favorite Bollywood drunkard though, is Keshto Mukherji who was rarely sober in his Bollylife!

Bollyviewer - Beth made the exact same accusation during the first Dance Off(!!). I can't help it if Shashi's greatness is a paradox! I always have trouble rationalizing it to virgin Bollywood viewers.

All great candidates indeed but it comes down to the same 2 it always comes down to - Amitabh & Shashi. Amitabh's 'little Amitabh' in a bottle from Suhaag is actually my favorite scene to do with alcohol in general. But the winner is? A tie - given to both of them for the (pretend) drunken driving scene in Silsila :)

p.s. Karma is about as much fun as you can have with an 80's multi-starrer *Dilip Kumar, Naseer, Jackie Shroff, Anil Kapoor & Sridevi. BONUS - it has a great Quwaali in it that is specifically about drinking called 'De Daru'!!!

In the Dance-off I think the poll was stacked with Big B fans. :-( For my part Shashi would get my vote for better dancing in any song against AB. But when it comes to acting, Nasseer and Om Puri are unfair competition to any actor. How bout a Mr. Handsome beauty pageant - Shashi is bound to win that hands down!

I think you missed Naseeruddin Shah in "Ardh Satya".
a sharaabi suspended police officer with a chirstian name, if I remember correctly.

Bollywood neophyte here voting for Amitabh and even though I love the reviews here, I simply don't share the Sashi love (except maybe for his eyelashes) yet.

Or maybe an eyelash contest. Shashi would definitely win that.

Forgot to mention; Colin Farrell said in the commentary for that movie about the CIA recruit that he plays an awful drunk, which is pretty funny considering his self-admitted fondness for the booze. So perhaps experience isn't the best way to play it well--maybe staying sober and observing the drunks is!

Karma is 80s masala to the max- you will love it, trust me :D Its a take-off on Sholay, and features Jackie, Sridevi and Anil Kapoor along w/ NAseer and Dilip Kumar. See also: http://www.imdb.com/title/tt0091328/

I've got another Amitabh scene for your drunking pleasure: in Ajooba, he gets shrunk to less than Ken doll size and falls into a cup of wine. So not only does he have to be drunk, he has to act opposite giant Dimple Kapadia and giant sets (or pretend to act against giant sets - I can't tell if these are actual sets or the whole thing is green screen).

Ectp - Alas, I haven't seen Arth Satya yet, though I'm DYING to.

Eliza - Oh dear, I had to Google-define "neophyte", but welcome! And bless you for adding "yet" to the Shashi love. If you build it, it will come.

Ajnabi - I am so surprised to hear this because Colin Farrell's drunken scene in The Recruit has always stood out in my mind and being really impressively, horribly trashed.

Beth - LOL! Yet another reason to watch Ajooba.

2 years late to the party but for female drunking I submit to you Meena Kumari in "Sahib Bibi Aur Ghulam." I personally find her performance more hilarious than touching, which is universally recognized as a flaw in my moral character, but no female drunking contest can be run without her.