Why should I love: Shah Rukh Khan?

The third in our Why should I love? project. Honestly, ever since we read Anupama Chopra's biography of him, our SRK mystique has been destroyed. You mean he's not Rahul?! Ah, but such is life! These people are human, too, not just gods of our idolatry.

Today, after a long dry spell of SRKness, we re-watched the passable Kal Ho Naa Ho. We wondered afresh what is it about SRK that makes him so compelling? A very good actor, in the traditional (perhaps Western?) notion of Oscar-winners and Shakespeare-doers, he is not. And yet he's such a great performer! Maybe it's his adorable dimples and fab ability to shake his butt. Or maybe it's just intelligence as an entertainer! He just knows how to please. We'd say his bouncy charm is best-used in ironic, self-deprecating ways - such as in Farah Khan's films. In those films, SRK can be his over-the-top, magnetic best, and we don't have to worry about things like traditional "actorly realism". 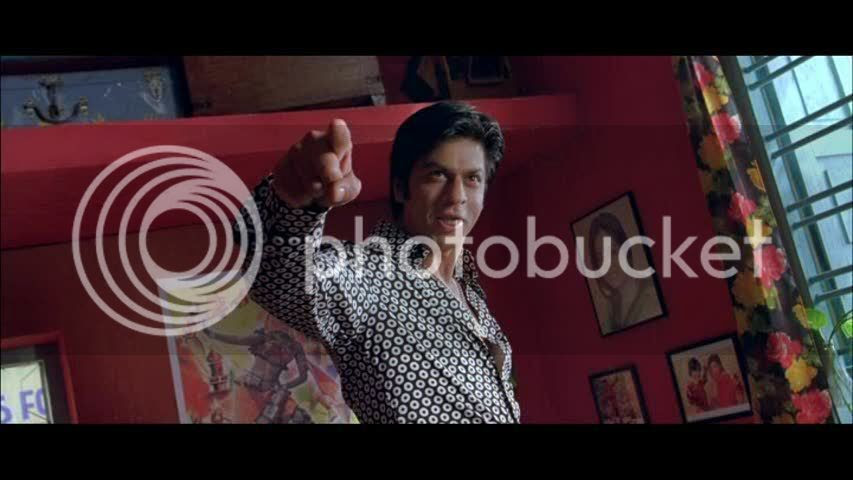 Why should I love: Shah Rukh Khan?

1. You should love SRK because he loves movies as much as the PPCC does, and sometimes is compelled to shake out of his theatre seat to dance along. You go, man!

2. You should love SRK because sometimes he loses the girl.

3. You should love SRK because sometimes he falls for the wrong girl.

4. You should love SRK because sometimes he goes a bit mental for the girl. OK, more than a bit.

5. You should love SRK because sometimes he loves the girl so much he will take on human form... and he's cute in a moustache.

6. You should love SRK because sometimes he is imprisoned for 22 years because he loved the wrong girl.

7. You should love SRK because sometimes he loves the boy. Ooh, Kantaben!

8. You should love SRK because sometimes he loves his science teacher and then makes adorably stupid puns on their "chemistry" together.

9. You should love SRK because will go to great lengths not to elope with the girl.

10. You should love SRK because, when not busy loving and losing and marrying girls, he also cares about the poor.

Previously in this series:

Seriously, you should just love SRK.

He has more charisma in his little finger than most people ever will in their entire bodies. I mostly love him for giving me KKHH :-)

I'd add "because he fights for freedom of the press" with a link to Phir Bhi Dil Hai Hindustani and "because he loves women in general, non-romantically, and helps them find their inner strength and struggles against a patriarchal society that has always put them down" with a link to Chak De. There's been a shortage of SRK around here lately too and I must find a cure.

Can I just love him because he is nontraditionally HAWT? Because I think that might be the main reason. *blush*

this does such justice to why i love shah rukh! also another reason could be "he loves older women" as seen in maya memsaab. and " he has a nice bum" as seen in that movie too! sorry forgive my silliness, but my love is too overpowering to forget that movie.

I love SRK when he is paired opposite actors who don't let him steamroll them. I really hate when he is allowed to let loose with his manic-lover-boy avatar. My favorite SRK is the under-control SRK.

I also love that SRK will whore himself out for any product available but treats his movie offers with respect, so he'll make a Chak De instead of pumping out 20 really terrible films.

LOve him for the warmth of his soul. Intense love is not easily portrayed in an attractive way easily on screeen. I wouldn't want to see my grocer hot for his wife at any given moment! ShahRukh makes love look beautiful and inviting. Even in his so-called manic lover rolls I want to help him heal, soothe him.
He hasn't pumped out 20 terrible films! He's given me more reasons to enjoy watching him and inviting him into my home for an exciting visit!! I can watch ANY of his so-called terrible films 20 times or more and still LOVE him for his intelligence and warmth in the softer moments.I find something I want to see AGAIN and have a hindi lesson.
He doesn't whore himself out to anything. Don't be envious or pious because he's making a living for his family doing what he loves in mass communications and the media. He's wonderful and comforting. My only disappointment is that I can't find my own version of him. I don't care about his riches but to have someone talk to me the way he does, looking at me the way he does, holding me the way he does... I'd even settle for an ALMOST kiss the way HE does. God bless him and his family MORE!;-)

A well-timed topic: I'm about two thirds through "Chak De! India," and I kept thinking, wow, SRK really deserves everything he gets!

Partly because he's just a really good actor in it, without any trace of movie star-ness, or using any of his familiar romantic comedy charm or emotional signifiers.

But mainly because I can't imagine an American megastar, especially a male one, putting so much into a story telling young women they better not DARE let anyone think less of them because they're girls. With a subtheme about how we all need to get over the sectarian BS and work together.
And it's not even a "message" movie: just a good old-fashioned crowd-pleaser, but with substance.

So I'm thinking Shah Rukh rocks, and in the future, I can admire his skill at emotional melodrama without being embarrassed. :)

Beth - Ooh, haven't seen PBDHH yet, but am curious! Aah, and Chak De. An excellent film.

Ajnabi - You can, and I'll agree with you. Oh, those dimples! Those eyebrows!

Anonymous - Ack! Of course you're right, but the PPCC is emotionally immature and we tend to conflate actors with their characters, BIG TIME.

Plus, "you should love SRK because he's a great performer" would necessitate linking ALL of his films.

Filmi Girl - Good point re: SRK the ad whore vs. SRK the serious moviewallah. I think OTT SRK is very effectively managed in Farah Khan films, and otherwise I agree that the more he reigns himself in, the better he gets. (A la Raj Kapoor!)

Toni Moon - Agreed that SRK's a great romancer onscreen! (But surely you'd watch SRK if he WAS the grocer, na?) Hey, there's no shame in being an ad whore, the man's gotta feed the family, as you say. Also, I think you misread Filmi Girl's comment - she was saying it's good that he hasn't pumped out 20 terrible films, but instead he chooses them with tender loving care.

Anarchivist - Chak De is great, isn't it? All future sins are forgiven for the goodness of Chak De.

All of the things you mentioned and more! He's the one actor that if by western standards not the best, is just plain amazing. And hits his roles with more enthusiasm than anyone.

what about you should love SRK "because he is the human embodiment of love" a la Mohabbatein?

I would love SRK for no apparent reasons...just that he is SRK and is so so so adorable :)