Is it just the PPCC or are Jackie Chan and Shah Rukh Khan the same person? 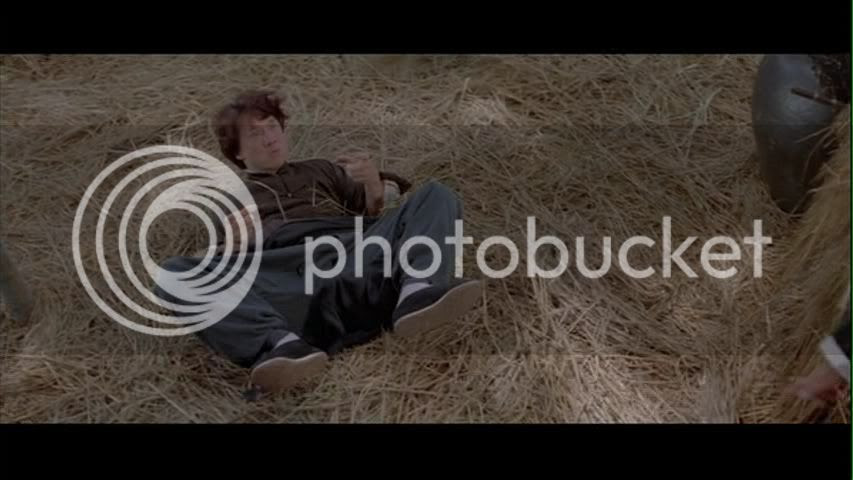 No, really. Hear us out. They are the same age-ish. They are both manic mainstream powerhouses of their national cinema. They both have poofy blow-dried hair and a bouyant, likable charisma. Both are great at physical comedy but kind of maudlin and melodramatic when it comes to serious stuff. Both tend to tread hyper-pop bubblegum cinema rather than anything more offbeat. And both are very talented performers, especially in the defining characteristic of their respective genres (dancing for SRK, martial arts for Jackie).

We resisted Jackie Chan for very, very long. Even though we're fans of Hong Kong cinema and consider ourselves amateur connoiseurs of the wuxia genre, we have seen all of two Jackie Chan films. He's very Hollywood, you could say, and indeed we were being snobbish and dismissive. But after the silly yet likable Forbidden Kingdom, we decided to get over ourselves and just give in. 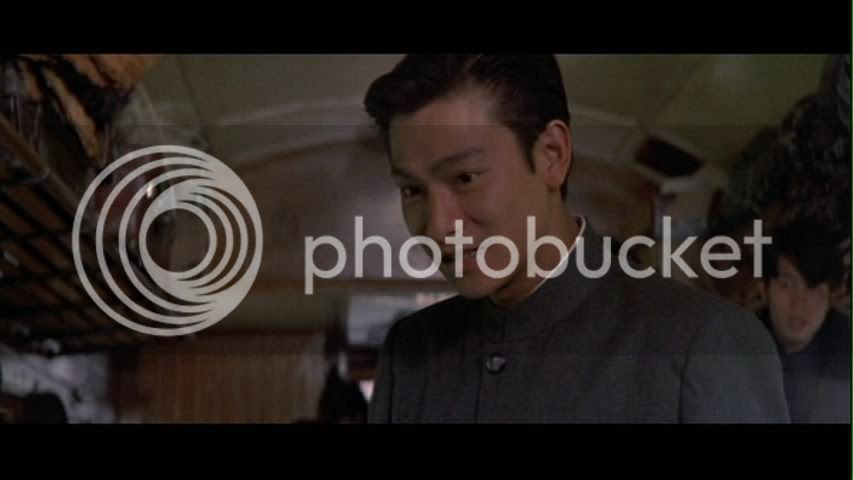 Andy Lau even has a cameo! We love you, Andy Lau! 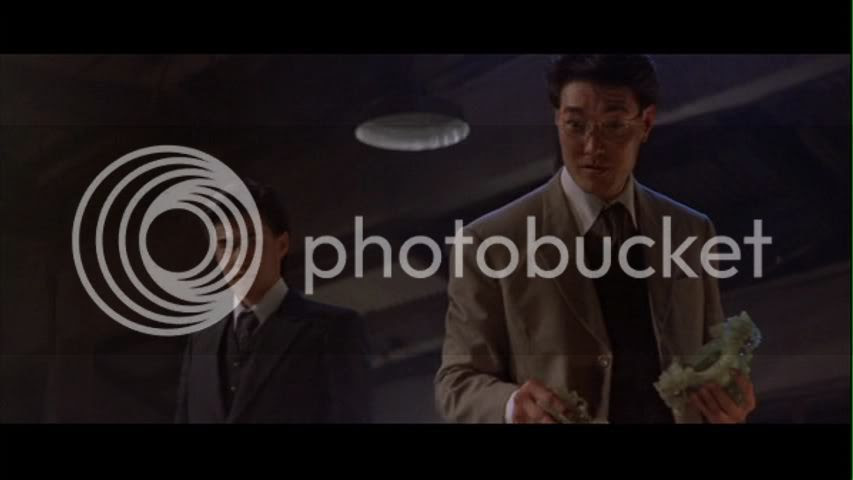 Jui kuen II (Legend of the Drunken Master) is a sunny, irreverent take on 19th century China. Fei Hung (Jackie Chan) is the bouncy son of medicine man and martial arts master, Wong (Ti Lung). One day, while Wong and Fei Hung are travelling on the train, Fei Hung accidentally misplaces his father's super-expensive ginseng root. In an effort to get it back (insert mega-awesome fight sequence), he happens upon an ancient jade artifact. It turns out the evil British (yes, yet another movie where the white man is a bane upon the rest of the world) are intent on stealing China's heritage. "Eventually, our young people will have to go abroad to learn about their culture!" one character despairs.

Well. That is clearly not gonna fly, and so Jackie embarks to kick some ass. When some Anglicized goons threaten his stepmom (the amazingly awesome Anita Mui) Jackie uses the expressly forbidden Drunken Master technique. Egged on by his hilarious and bad-ass stepmom, who feeds him bottles of hard liquor, Jackie seriously kicks some ass but gets seriously trashed in the process. His father is horrified to see his son (1) drunk, (2) using the Drunken Master technique (which is just a slippery slope to alcoholism, the father warns) and (3) fighting in the streets. Despite Stepmom's hilarious attempts to dissuade and distract Father, Father still canes the hell out of Fei-Hung and kicks him out of the house. Cue melodrama. We'll skip this bit.

Suitably chastised, Fei Hung promises not to use the Drunken Master technique. However, the goons are still robbing China of its cultural heritage, and soon enough a show-down is brewing at the local steel factory. You'll have to watch it for yourself, but the final fight scene is so freakin' fun, and includes Jackie drinking what are possibly tubes of lighter fluid (though he burps bubbles later, so maybe it was soap).

There are several things that make this movie SO awesome:

We at the PPCC normally go for wuxia. Popularized by Ang Lee's Crouching Tiger Hidden Dragon, wuxia are Chinese martial arts stories that are heavy on the magical realism. Wuxia films - such as Zhang Yimou's Hero, or House of Flying Daggers - feature slow, luxurious, elegant fight scenes making heavy use of wires. These fight scenes are stylized and mystical, where characters fly through bamboo forests and narry a drop of blood is shed. They are just looovely.

They are also a far cry from the more meat and potatoes kung fu genre, popularized by Bruce Lee. This genre of martial arts films instead make heavy use of stunt fighting and indeed these fight scenes rely critically on the actors' genuine martial arts skills. Hence Bruce Lee, Jackie Chan and Jet Li are all real-life martial arts champions, whereas Tony Leung Chiu-Wai and Chow Yun-Fat, two actors who have starred in well-known wuxia films, are just actors. 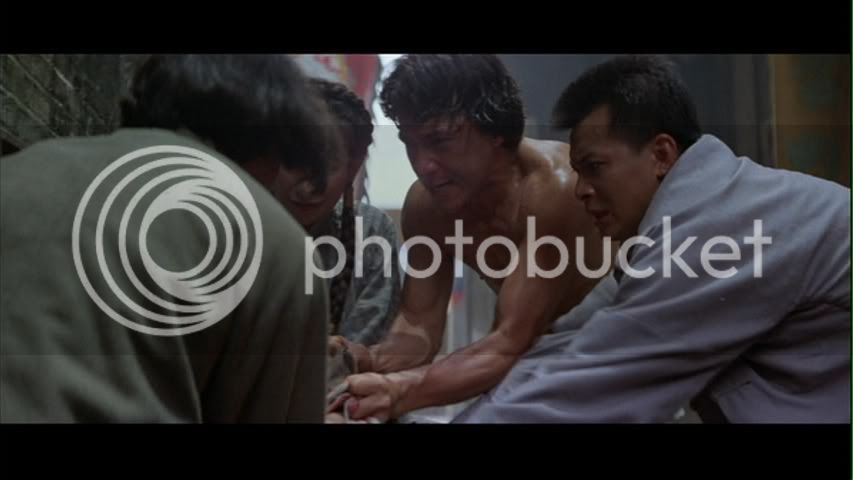 One scene of Bruce Lee-esque intensity.

Jackie Chan's martial arts skills are powerfully evident in Legend of the Drunken Master. His manic energy and flexibility are really impressive, and indeed, unlike the screaming intensity of Bruce Lee (HEEEEEYAAAAAAA!), Jackie's fighting style always borders on the physical comedy. He gets into a number of contortions which are really quite funny, infusing slapstick into his punches. It's exhilirating and fun to watch.

Throughout the film, Jackie's character, Fei Hung, is identified with women, especially his powerful stepmom. This lady is hilarious; she is not only as charismatic and energetic as Fei Hung, but she is also a firebrand and apparently Fei Hung's secret instructor of the forbidden Drunken Master technique. 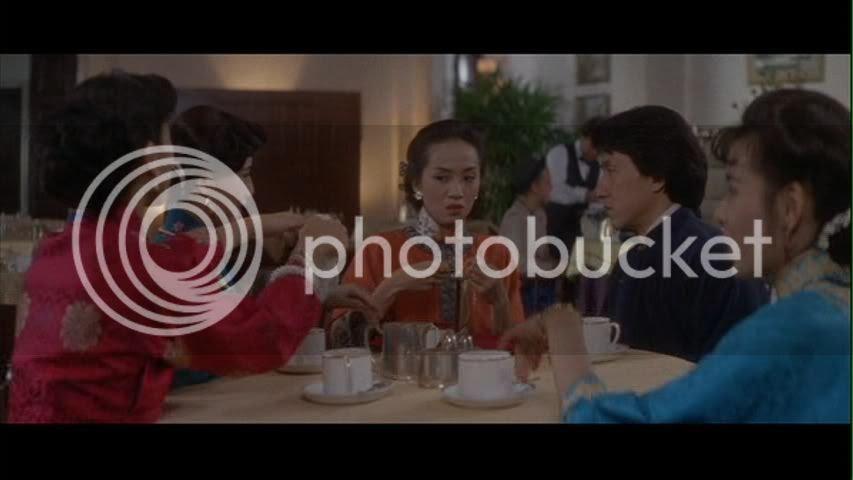 Jackie's just one of the ladies.

There's a very funny sequence when, in an effort to calm Fei Hung's father after Fei Hung's disastrous drinking, she feigns fatigue resulting from a surprise pregnancy. When she accidentally falls on her stomach, her horrified husband anxiously asks, "Are you all right? Is the baby all right?" She thinks hard, shifts her stomach around and then pats it, saying in dead-pan, "He's fine." OMG!

The relationship between Fei Hung and his stepmom is also very sweet, as she's constantly looking out for him and encouraging him on. They were the best part of the story! 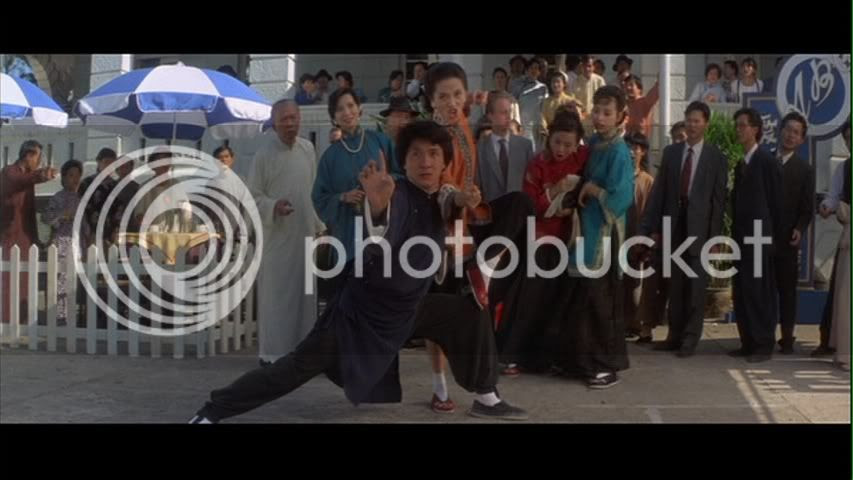 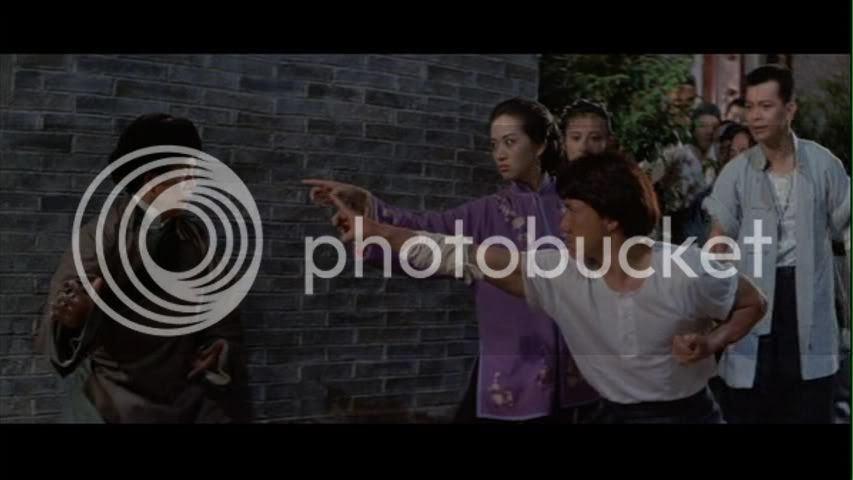 We love Chinese films with a historical bent, regardless of genre - e.g. The Emperor and the Assassin, or The Warlords, or even Fearless. And, regardless of genre, we've always seen the historical context treated with dignity and respect. So it was unexpected and unexpectedly freeing to see a movie with a historical setting but without the austerity. Sure, this movie was bubblegum silliness, but even Fearless, which was similarly pop, still maintained a very serious attitude towards its context. In Legend of the Drunken Master, however, there's complete irreverence. In one sequence, the family is discussing the terrible drought in some village.

One character reports, "People there are so poor that some families have to share a single pair of pants!"

Our overall judgment is that, if you can cringe your way through a couple horribly melodramatic moments, you will gain ample rewards in KICK-ASS kung fu! (Plus, bloopers run during the credits - and that's always awesome.)

Posted by a ppcc representative at 00:45

I love Jackie, and I love kung fu. I still cry over the loss of Bruce Lee.

Jackie and SRK are totally the same superstar split into two bodies. I have long held this view but never dared to admit it till today. :-D

I can't really weigh in on any of this intelligently, having seen Jackie Chan only in movies that also star Owen Wilson (WHAT?), but I am swayed by your arguments re: SRK.

I WEAR THE PANTS.

Woo hoo it is always good to see another kung fu film enthusiast.

As a fan of East Asian cinema, I feel the need to recommend you some films starting with

Peking Opera Blues
Swordman II (and its sequel The East is Red) not Swordman I -yet- since they are only bound by genre.

And for good Jackie stuff you should give a chance to

But I think Akshay is a better Bollywood Jackie than SRK.

P.S: Wuxia films can be very different than what Zhang Yimou made you believe :) (Just check Swordman II out and you'll see what I mean)

Woah cool blog. Totally adding you on my blog list. I love marital arts movies too. I didn't want to combine my Hong Kong films (which I don't have a blog for yet), Indian, and Korean blog. I watch too many movies, I tell you.

Ajnabi - Ha! I'm so pleased to hear I'm not the only one who's thought of this.

Beth - Which movie was that? And, no, I believe in our relationship, Beth, SHASHI WEARS THE PANTS.

Eliza - Glory be unto you! Thank you for all the suggestions, you are DA BOMB. Keep 'em coming. :)

Nicki - Thanks! Hey, combination is the best. It's like fusion cuisine... only it's movies. :)