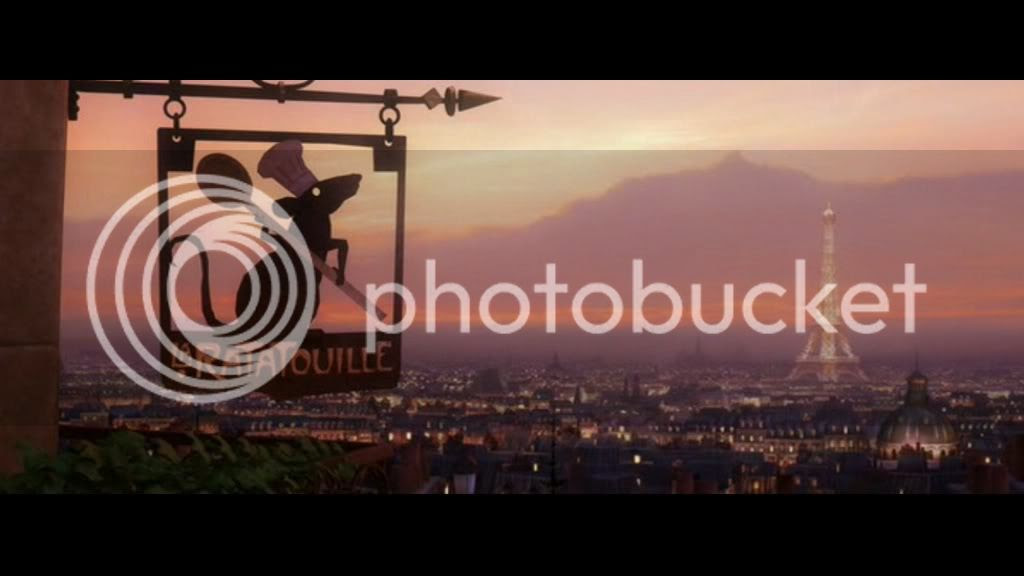 Let us bask in the glow of Pixar! Oh, Pixar, Pixar, Pixar. All their films are so good, appealing to all ages, and with that Pixary touch of humorous, humanistic authenticity (even if they're actually about fish or rats). Pixar knows humanity!

And Ratatouille is their most impressive film in terms of showing us humans. While the protagonist is a rat, the vast supporting cast is mostly human. In the manner of excellent caricatures, these humans are starkly drawn, emphasized, but striking true to the heart. For example, even though Linguini's (Lou Romano) bumbling slapstick is cartoonish in exaggeration, he still calls to mind a living, breathing gangly young man. And there are some great moments on the human roller-coaster: Linguini and Colette's first kiss, under looming pepper spray; Remy the rat rolling his eyes at a random lover's quarrel; the bored, dismissive Health Inspector on the phone; food critic Ego's childhood memories. Everything is wonderfully drawn (pardon the pun) and wonderfully touching. 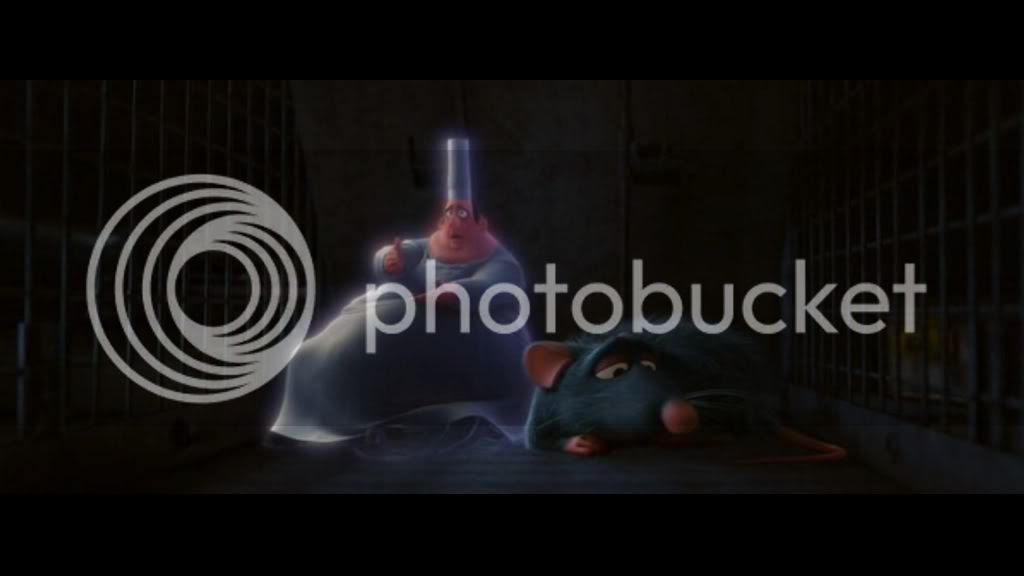 The plot follows little Remy (Patton Oswalt) on his rise from obscure village rat to celebrity chef. The story begins in the boondocks of France, where Remy struggles to eke out a living with his family by stealing trash. Remy's hopes, though, fly to Paris. Inspired by the populist philosophy ("Anyone can cook!") of his hero, the late chef Gousteau (Brad Garrett), Remy dreams of magic in the kitchen. Of course, none of his rat companions care to distinguish between fresh brie and moldy cheese, and so high-minded (and high-nosed) Remy seems doomed to obscurity. However, after a cataclysmic confrontation with a trigger-happy old woman, Remy is literally flung into the sewers of Paris.

One coincidence leads to another - partly fueled by Remy's imaginary companion, a ghostly floating Gousteau a la Obi-Wan Kenobi - and soon Remy finds himself in the kitchen of Gousteau's famous restaurant. There, he witnesses the near-destruction of a soup by the clumsy garbage boy, Linguini (Lou Romano), and saves it secretly. When the soup is a hit and Linguini is asked to do it again, another coincidence leads the two young men (well, young man and rat) to meet and team up. Now Remy's skills have found expression through Linguini's hands, and Linguini has job security. The suspicions of the little, evil head chef, Skinner (Ian Holm), almost expose them - and likewise the pressure is building, as Gousteau's restaurant is regaining acclaim and attracting the attention of France's most notorious food critic, Anton Ego (Peter O'Toole). Throw in some romance, commentary on Slow Food versus frozen dinners, great comedy, commentary on the Meaning of Life, philosophy of aesthetics and - voila! You are served an excellent, fulfilling film. C'est tres bon. 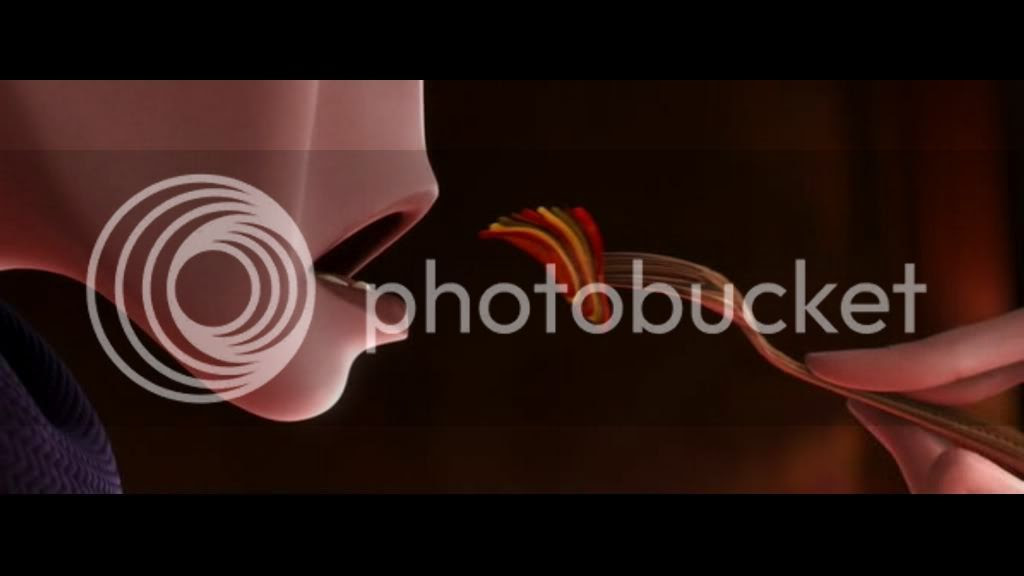 The pitch-perfect climax. This was the first film where watching someone eat made the PPCC cry.

In The Incredibles, Pixar advanced the notion that, in an age of American classlessness and political correctedness, sometimes talent should be recognized for what it is: elite. Not everyone is talented. Not everyone can be above average. That is, "if everybody's a hero... no one is". While that's certainly an interesting manifesto (and we at the PPCC also agree with it; talent populism boo), we had more fun reading A.O. Scott's analysis of the film than watching it itself. Ratatouille is basically a reiteration on that theme - in this case, "not everyone can be a great artist, but great artists can come from anywhere" - but packaged in a much more affecting and fun way. The tensions between Remy's provincial background and his fast-paced creative ambitions are realistically portrayed (think Great Expectations), as is the importance of letting true artists get their due. Not everyone can cook, or paint, or produce beautiful things. So celebrate those who can! The film also takes an interesting pot shot at critics, as Ego's final monologue muses that perhaps a critic's only worthwhile contribution is popularizing unknown, new talent, since even mediocre art is more meaningful than criticisms of it. And as Ego says, "The New needs friends." 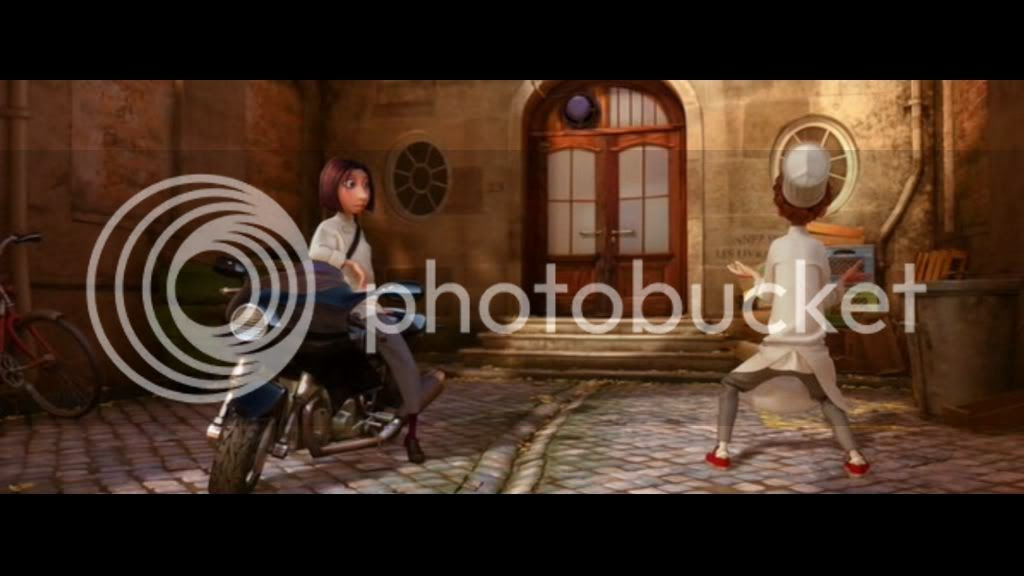 Linguini has a lot of funny body language.

We read somewhere that Pixar had to scale back the realism in their animation when, during the making of Finding Nemo, they were criticized for it. The audience wouldn't be able to handle it, they were told. Ratatouille hits a happy medium aesthetically, as the humans are more like cartoons living in textured reality than real people living in a cartoon. Just marvel at the stitches in Ego's scarf, the wet plaster of Linguini's hair, the clouds behind the Eiffel Tower. It's amazing! 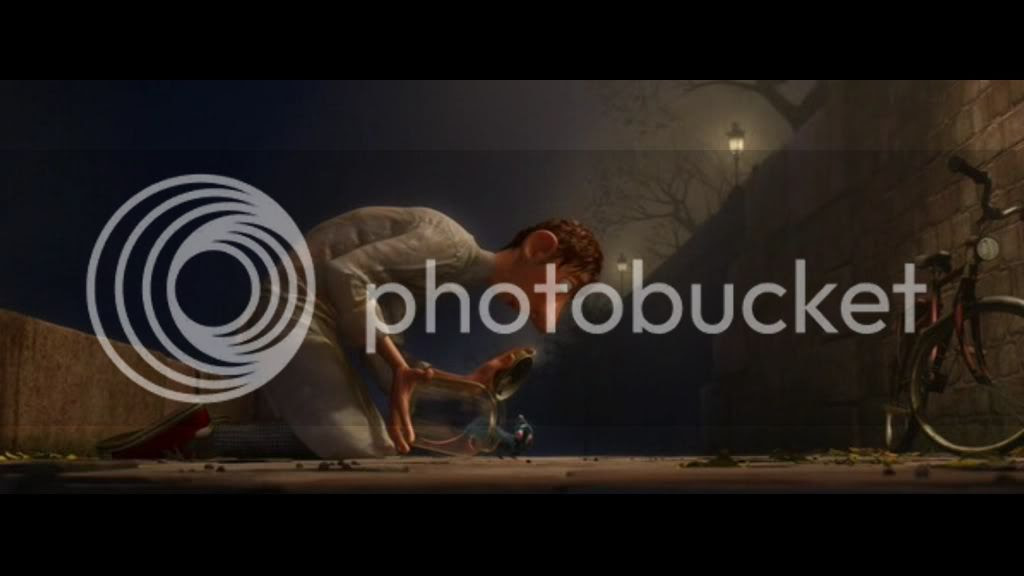 Marvel at the wet textures!

The voice actors all do a great job, and we should make special note of Lou Romano, who played Linguini. He took a role that could have become the typical high-pitched whiney Disney standard (e.g. Sword in the Stone's Wart), but instead gave him a realistic, likable awkwardness. Also, Remy's brother Emile (Peter Sohn) was very sweetly performed. But those are just the two stand-outs, everyone was good. 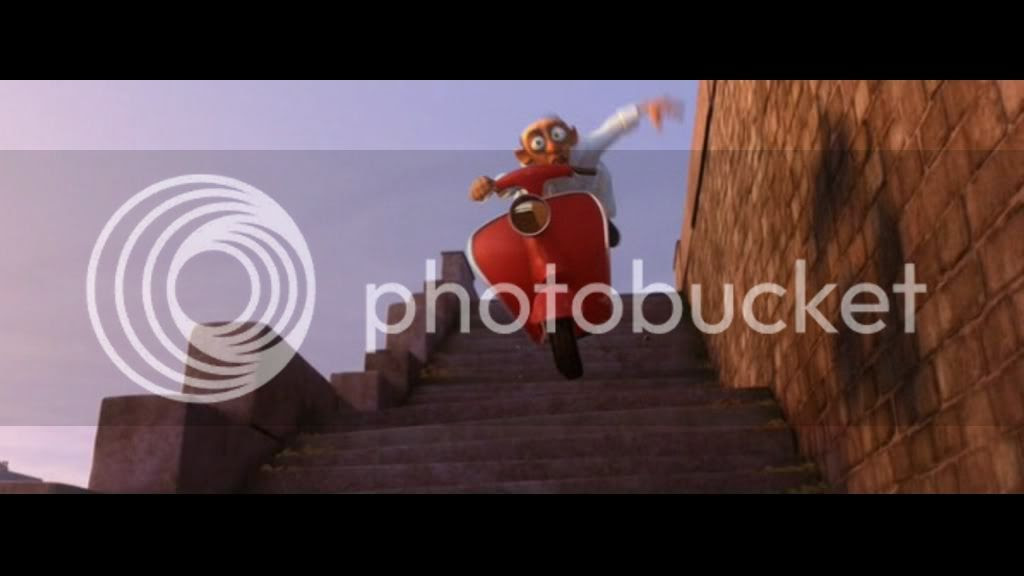 Posted by a ppcc representative at 02:43

Oh yes indeed- I wept during the climax of this as well. Gosteau smacks strongly of James Beard & Julia Child to me- so happy, so embracing. Stunny visuals, I do agree- this, and Kung-fu Panda are undoubtedly the most visually entrancing animations ever, in my book :)

We own this movie, and everybody but me loves it. The concept of a rat near food makes me break out in gooseflesh and suppressed whimpers. I think I must have a dil ka pathara (or whatever). :-(

That being said, even I cried during Ego's big flashback. So Awesome. And I really like the bonus feature "History of Our Friend the Rat."

I love this film. A friend of mine who *hates* animation (yes, I know, I know) even liked it.

I need to invest in a copy of it. Was one of the few films I ventured into an actual theater for :-)