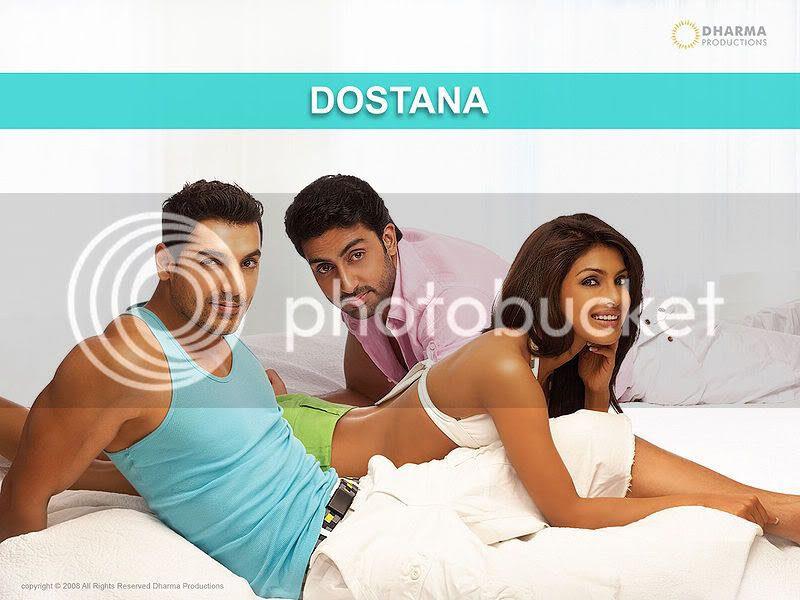 The PPCC is up with the times, yo!

We went into Dostana with some misgivings. A mainstream Hindi film with a not-unenlightened treatment of homosexuality? Was it possible? Sure, it was produced by Karan Johar - one of Bollywood's few openly gay celebrities - (Ed. note: Schooled in the comments, see below! Oops!) and yet, what with the gay-bashing stereotypes most typically found in the genre, we were already cringing in anticipation.

For those that have managed to evade the publicity for it, Dostana's plot is simple: two straight friends, Sameer (Abhishek Bachchan) and Kunal (John Abraham), pretend to be a gay couple in order to sublet a flat from the beautiful, single Neha (Priyanka Chopra). A bond of mega-friendship blossoms between the trio - and soon both men find themselves falling for Neha, while Neha herself begins falling for her new boss, the studly single father, Abhi (Bobby Deol). This love rectangle, which seems fairly impossible to solve without several people getting their heart mushed, is further complicated by wailing, conservative Punjabi mothers (Kirron Kher), lecherous old fashion execs (Boman Irani), demanding children, clueless aunts, and the whole "pretending to be gay" thing.

So, does Dostana make cheap "isn't being gay funny?" jokes? Well, sometimes. But not that much! And overall, it shows that gay people are people too - not the craziest idea for most of us, but certainly unambiguously progressive for India, where homosexuality is still illegal. Even the gay jokes are, thankfully, muted - Boman plays a fairly stereotypical queen, there are some limp wrists and dainty hops, but there are also scenes where characters get over their initial homophobias, where characters shrug and say "Who cares?", and a boy-on-boy kiss. Indeed, the film has a gently neutral attitude towards homosexuality, and a gently satirical attitude towards Bollywood's historical homophobia. For example, the conservative "Nahiiiiin!"-ing mother is lightly ridiculed in the wonderful song, Maa Da Laadla. Even more importantly, she comes around in the end. Furthermore, the long history of homoerotic undertones - Dharam-Veer, anyone? - is teased as well. "Come on!" Abhishek cries at one point. "Gabbar Singh was totally gay!" This may not be envelope-pushing stuff, but Dostana treads an important line: normalizing and mainstreamifying gayness. It's important that it doesn't flop in India. Indeed, it's greatest crime - we reckon - is that it doesn't go far enough in challenging homophobic norms. We at the PPCC will take a pragmatic attitude for now: it's a beginning. 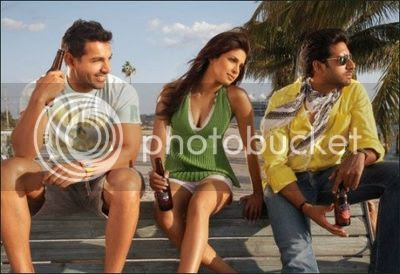 Another reason we're happy to compromise is that, on top of this generally "safe space" vibe of the film, it's also just a fun, frollicking good time. We haven't enjoyed a Hindi film in the theatres so much since Om Shanti Om. Indeed, after the trash we'd been sitting through - Welcome, Krazzy 4, even the mildly acceptable but soulless Tashan - we were becoming a little desperate about the state of Bollywood today. Dostana has thankfully reminded us why mainstream Hindi films can be so good, when they're good. It aims for the usual target - big, juicy masala dil - and gets it, right in the bull's eye. We laughed, we got verklempt - and we can only hope that SRK's upcoming Rab Ne Bana Di Jodi continues the trend.

We can say even more good things about it: the songs are fun, the acting is generally great, and the direction - from newcomer Tarun Mansukhani under Karan's tutelage - is upbeat and skillful. Abhishek displays some wonderful comedy chops that he must have inherited from his dad. Indeed, his jodi with John was stellar - Abhishek's emotional clown act played excellently against John's straight man routine. Indeed, John Abraham was a revelation in this. He didn't do much, in terms of emotional range, but what he did - he did well. Boman and Kirron were hilariously over the top, and Bobby Deol basically just stood and smoldered. Which is what he was there for. 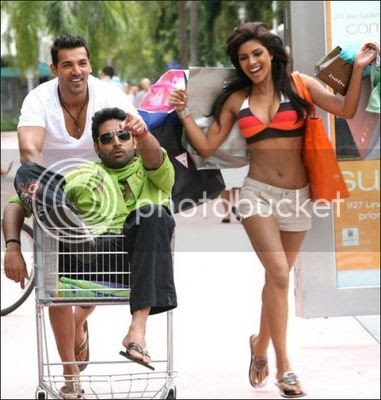 Can we criticize this film? Well, we'll try. As we said, it wasn't 100% pure of those lightly offensive stereotypes, it didn't create a revolution in norms (can a mainstream film be succesful and do that?), and it was a little overlong (a blessing and a curse of the genre, though). However, these are really minor criticisms. Overall, it was less flawed than, for example, last year's Om Shanti Om, which suffered from a bizarre and silly second act. (That said, it was also less emotionally epic than OSO... and we reckon Rab Ne Bana Di Jodi, if the second trailer is anything to go by, will happily compensate us with some super-size masala a la Suhaag. YAY MASALA!)

Posted by a ppcc representative at 15:29

Awww, did you really think Tashan was soul-less? I think it had quite the message; I struggled and probably failed to put my finger on it. LOL I think Dostana sounds like a fun watch, and I cannot *wait* to see the K3G and KKHH moments. :-D Unlike the PPCC, though, I'll have to wait for the DVD release.

I'm glad you liked it. I think I will too, sort of like I liked Three's Company on TV in the seventies.

BTW, KJo is not openly gay---he refuses to say yes or no to the question on the rare occasion when he's asked :-)

And I like the new header too, specially the noodles. Mmmmmmm....

Thanks, Memsaab... I was going to say something similar. I think he's got a "Don't ask - Don't Tell" approach to his sexuality.

Also, PPCC...! I loved Dostana, too! Right on about John Abraham. He had a great chemistry with Abhishek. I would really love to see them in something else together. Abhi isn't so big in his acting - like Akshay in Garam Masala or Arshad in Kabul Express - that he overshadows John.

I am totally enthu about this movie! though from the promos, I do wish Abhishek was styled better- its supposed to perhaps contrast his presumed feminity with his macho looks, but i think he needs a change :)

Ajnabi - Alas, yes. I really, really wanted to like Tashan... but, in the end, I was just a bit "meh". Yeah, the K3G/KKHH moments are very sweet and meta.

Memsaab - Ahh, thanks for the correction. I don't know where I got the idea that he came out. Guess not!

Filmi Girl - The jodi was pretty powerful stuff, I must say. It would foolish for some producer out there not to capitalize on it! It'd be like not capitalizing on SRK's lovable Dorkman persona!

How cringe-worthy were Boman's gay-isms? And would they have been worse in the hands of, say, Satish Shah or Anupam Kher? (Assumed answer: lord yes.)

John Abraham was a revelation? Bobby smolders? I must know more, for I am skeptical.

I third the header! Fab!

For what it's worth, although Boman was playing 'gay' he wasn't any campier than some of my aquaintence. Anupam Kher on the other hand... I think it's a relief he didn't get the part.

(And John is, indeed, a "revelation"... mmmm... Seriously, though, he plays a great "straight" man to Abhishek!)

This film has more than one message nicely packed in skimpy, branded clothing and easy-on-the-eyes guys. More than just that being gay may be not so bad. A female sharing a flat and friendship with guys, however gay, is quite courageous. Between 3 rather eligible males, the heroine chooses a single father and metrosexual. Just why are Indian actors no longer allowed to looked Indian?

I also enjoyed this film!

Although I noted in my review that the stereotypes were there, I took it with a grain of salt since I knew the source was none other than Karan Johar, and he's never been the most tactful soul. But your point of view is v. interesting...you really focused on the positives, and I agree those outweigh the negatives in this film!

I always love Abhishek in comedies! That, along with John Abraham's body and the KKHH reference, made this a fun ride for me!

That is a movie I watched with VERY low expectations. Well, I was pleasantly surprised. It was pure moment of fun, very enjoyable. And easily watchable with friends. :D

john abraham acting awesome in this film, thanks for sharing

priyank is lookin so hot

Its Awsome I Aggree