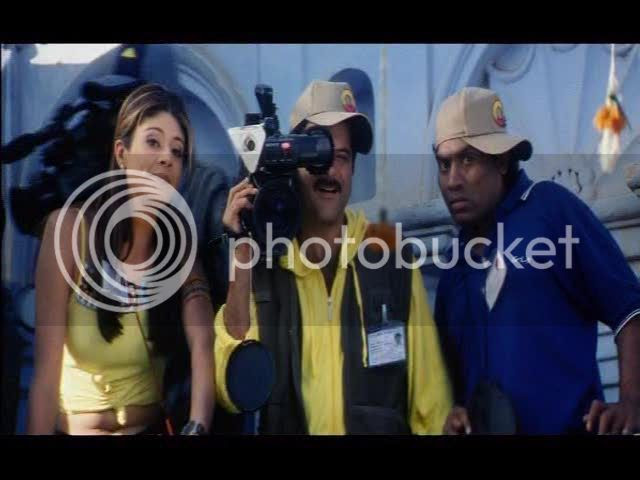 This movie was so 1990s we were having Kris Kross - totally krossed out! flashbacks. And it was made in 2001!

With blow after wacky blow, Nayak: The Real Hero slowly wears down any reluctance you might have to it. "You know you love me!" the film insists and, even though we cringe in embarrassment and scoff and laugh at it, it's right. "Love meeee!" The IMDb review entitled "Bright and brash" by rl400 perfectly sums it up:

A very silly, bright and brash comic book of a film that highlights Indias significant corruption problems but still entertains. Despite starring the old and hairy Anil Kapoor and the awful Johnny Lever in an irritating first ten minutes this film is bursting with vibrant colour, grand song sequences and energy. Rani is as stunning as ever in her occasional appearances as the love interest and sports a rare (but very welcome!) cute village girl look...It won't trouble any brain cells but the three hours whizz by.. a real old school entertainer.

Part Dave, part "This is your brain on drugs", it's one of those psychadelic masala movies, only with a (delayed) 1990s bite of satire, media frenzy and parody. If you're one of those people who recoils in fear from clowns, you might want to avoid this - it's a circus in total chaos! It is over the top to the max, merrily flinging around extreme scenes of extreme emotion. This may make it sound hard to get into - what about suspension of disbelief? - but honestly, it is a rollicking good time. We haven't had this much zany fun since the 70s. 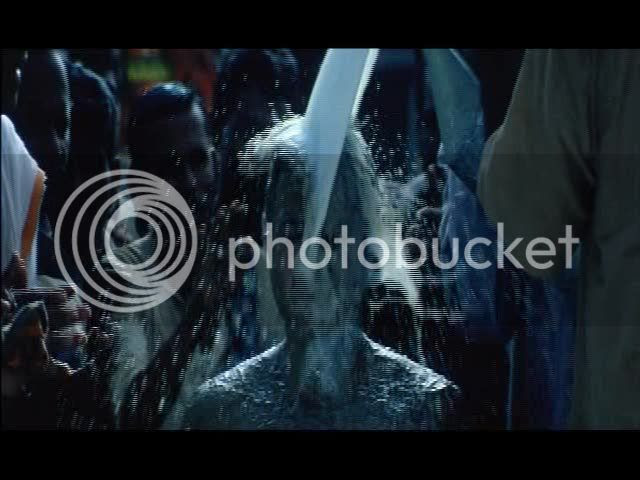 Just one of the many bizarre moments you'll enjoy when you watch this film.

As Mr. IMDb reviewer briefly describes, the plot centres around bouncy, likable reporter Shivaji Roa (an admittedly very hairy, pre-wax Anil Kapoor). Shivaji's just a cool Mumbai homeboy with a heart of gold. He and his partner (Johnny Lever) work for a TV station, capturing in their paparazzi-glare the rioting, corruption and cynicism so seemingly embedded in their city. During one of their reports in a remote village, Shivaji's heart is captured by the spunky village belle, Manjari (an absolutely adorable Rani Mukherjee). Things seem to be on the up for Shivaji (like Anil these days!) - he's just been promoted, and he's been asked to interview the Chief Minister of Maharashtra State, Balraj Chauhan (Amrish Puri). The idealistic Shivaji gleefully dismantles Balraj's entire political credibility on live television, earning him many enemies and a challenge from Balraj himself: "Oh yeah? You think you could do better? Well, I henceforth make you Chief Minister for a day!"

The remaining two and a half hours basically follow this conceit over a roller-coaster of craziness. Just like Kevin Kline's everyman president in Dave, Shivaji turns out to be a much better politician than all the others: single-handedly tackling all the hairiest (no pun intended) problems like slums, low employment, Eve teasing, judicial lags and, of course, corruption. This naturally earns him the hate of those invested in the status quo, and there are many, many wacky fight scenes - including one where he loses all his clothes and emerges from a pit of sludge like some nude mud monster doing bizarre kung fu! When not getting almost assassinated and drenched in sludge (or milk), Shivaji retreats to his village Elysium where he frollics through the fields with Manjari taking hallucinogenic drugs, cavorting and being hilarious and adorable. Indeed, the entire romance is solely based on several similarly-themed songs ("We took LSD and now we're going to roll around in the great outdoors!") - which may make it sound like a bore, but it's actually delightful and cute to watch. 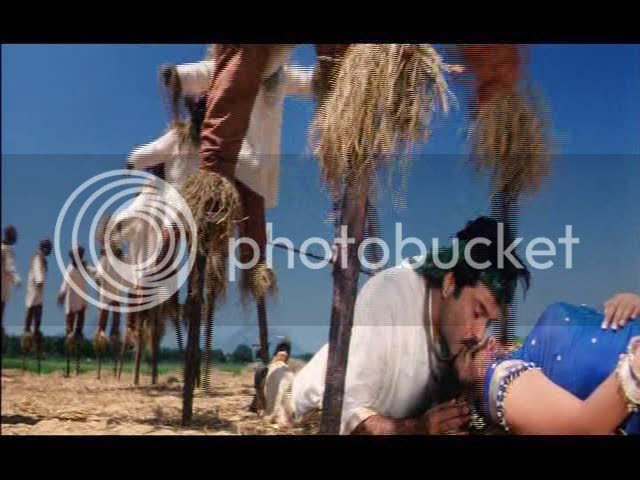 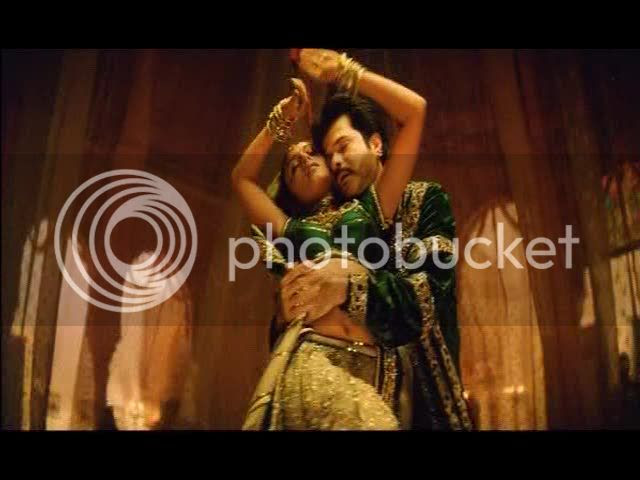 The "Rani has totally seen Mughal-e-Azam too many times" song.

This stuff is pure pop, but it's pop of the best kind. It takes itself seriously when it should - that is, it never undermines or teases the real problems of the society it satirizes. For example, when a traffic jam degenerates into full-fledged rioting, the camera lingers on the victims and there is great sympathy in its treatment of the poor and downtrodden. Anil Kapoor, as the Everyman Hero, plays it straight: his earnest emotional reactions ground the film's insanity into something at least remotely relate-able. The package may be crazy, but the message is pure and true.

Performance-wise, as we said, Anil does a really great job. He is deeply likable as the charismatic, "buddy to everyone!" Shivaji. Apparently this role was originally going to go to Shah Rukh Khan, but we're very happy Anil got it instead (indeed, we're even thinking Anil would have been better than SRK in certain SRK roles as well). Rani Mukherjee, with a relatively small and limited role, managed to be likewise adorable - she did all her tradermark "cute Rani!" things such as pulling silly faces and freely bursting into tears. Johnny Lever had literally one joke in the entire film, which he insisted on repeating in every single scene he was in. Amrish Puri, who we're starting to regard as a gem of Hindi cinema if only for so gamely tackling any role he was given, gamely tackles the super-evil, super-corrupt, "I break people's arms in my limousine window as I drive away" politician. He was a lot of fun. 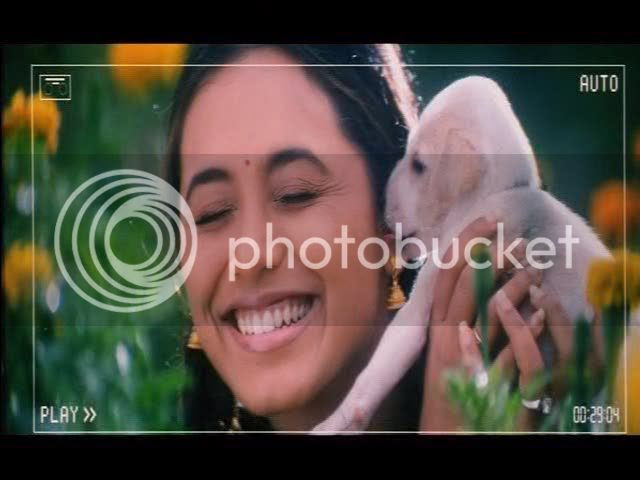 Oh my gosh, so CUTE. 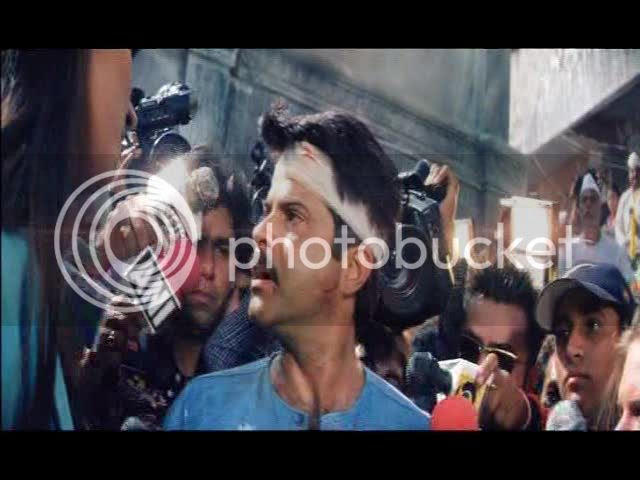 Poor Anil character fell down the stairs after taking too many - JUST KIDDING.

What really gives the film its personality, though, is the direction, cinematography and song picturizations. We were slowly coming to grips with its Wayne's World-style extreme close-ups and "earthquake" effects when this song popped up and we were completely enamoured (and not a little scared). It was nightmarish, Alice in Wonderland-style insanity - and incredibly compelling! In fact, all the songs were such fun! While not A.R. Rahman's best, music-wise, their picturizations were so lovable that we ended up watching several of them several times. One of our favorites - and a great example of Anil and Rani's chemistry (dudes, Calcutta Mail is sooo on our list now) - was the "How much fun is eating stale rotis when you're around! Oh, I've gotten drunk on cold water!" song. This song was a riot - they exchange clothes! they lick each other's tongues! they give each other tummy raspberries! she plays make-up with him! They just go nuts, and it's incredibly cute. We would have been happy if the whole movie was just one long protracted 1990s MTV session of Anil and Rani going mental.

In the end, we were surprised how satisfying this movie was. It was loud, colorful, unique and full of "who gives a flying eff" WTF insanity. Highly recommended.
Posted by a ppcc representative at 15:45

I loved Anil in this film. And its a great film giving a big political message. The pictures you posted are awesome, thank you for them.

Wait. "They lick each other's tongues?" For realz? Wow, that's... Well, this movie's going in my queue just for that WTF moment. LOL

Fabulous movie, and I think your description of it as serious when it needs to be and crazy-on-the-outside, pure-on-the-inside is perfect. (And I think that will be my new year's resolution.) I looooove the songs as well. Who doesn't want to know how to say "Shakalaka Baby" with the right zest (and random Spanish)? And the snakes! That song looks weird and sound sublime! And the pot people. One of my most fave picturizations.

fabulous post! I love this movie, its soo wacky and serious attempting at the same time, Rani is one actress that makes a good couple with Anil which i outlined in my Masala Pradesh Vision of a heroine! please read!

I think I've avoided this (the Anil-as-hero thing) but now must must see. Thanks :-)

Saurabh - Welcome! I've got to say, it's turning into my Favorite Anil Kapoor Film so far. I just can't get enough of it.

Ajnabi - Check out the stale roti song (my favorite one). Anil asks Rani for some of the paan she just put in her mouth and they have a tongue exchange! Those crazy kids. Maybe they should lay off the paan, actually. You absolutely MUST watch this film.

Beth - All the picturizations were so inventive and refreshing and... oddly smart! I just love how the frustrated Rani envisions Anil's job to be this really baroque, medieval affair. I couldn't stop laughing when it started.

Rum - They have great chemistry, yes! They both have such a funny sense of humor, I would love to see more of that jodi (but alas, only 2 films so far!).

Thanks so much for reviewing this--I don't think I would have found it otherwise. We loved it! From the cheesy fight scenes to the rather frightening dance numbers, this was so much fun! My 13 year old son who is my constant companion in Bollywood watching declared this one of the best ever.

I recommend you see the original Tamil film Mudhalvane, it was a better watch IMO and had Manisha Koirala.