No Entry had so much going for it. Recommendations from work friends. Biggest hit in 2005. A spunky, lovable song we had already fallen in love with. 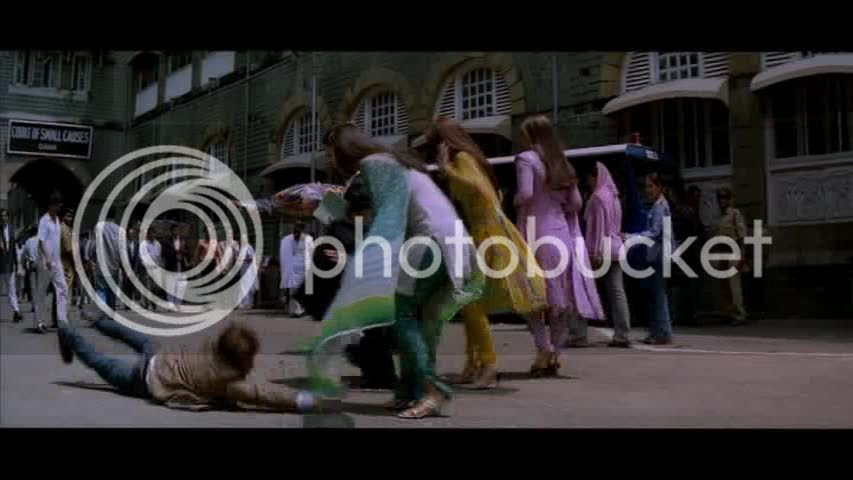 There were a lot of men falling at women's feet in this film.

And, after torturing ourselves for over two hours, we can bewilderedly report that it still has a lot of things going for it: charismatic, pitch-perfect performances from Anil Kapoor, Lara Dutta, Fardeen Khan, Bipasha Basu, Boman Irani and even Salman Khan, nifty camerawork, not-bad songs. Heck, everyone even looked good - lovely eye candy! So how did it go wrong? Well, friends, it went Jab Jab Phool Khile-style wrong. Yes. It was evil. It was misogynistic, vapid trash.

We wanted to laugh. Ostensibly a comedy, the plot centres around three friends: first, there is the meek, henpecked Kishan (Anil Kapoor going "Aw, hyuk!" a lot); next, the married-yet-still-a-playah Prem (meaning love; Salman Khan); and finally the gee-golly-whiz kid Sunny (Fardeen Khan). Prem is always teasing Kishan for being so faithful and submissive to his obsessively jealous wife, Kaajal (Lara Dutta), and, one night after some hard drinking and hard thinking, he decides to pay his good friend, the prostitute Bobby (Bipasha Basu), a bunch of money if she can succesfully bed Kishan. Note also that Prem's wife, Pooja (Esha Deol), is apparently unaware of her husband's ceaseless meandering.

Here the comedy of errors begins to unfold. As Bobby aggressively pursues the indecisive and stuttering Kishan - at one point tackling him - over-jealous wife Kaajal becomes yet more jealous. As shoes, panties and women's jackets are found, Kishan and Sunny begin an elaborate con which involves several fake marriages and one real one, many fake relatives and Hindi-style coincidences.

If the idea of a husband and his friends narrowly avoiding the rage of his over-jealous wife amuses you, then you'll probably think No Entry is pretty funny. Or maybe not - once you've seen that same situation milked OVER A GAJILLION TIMES. Honestly, how was this one-trick pony supposed to maintain our interest? How funny can the same scene be if you just change the context and details? Especially if it wasn't very funny to begin with?! 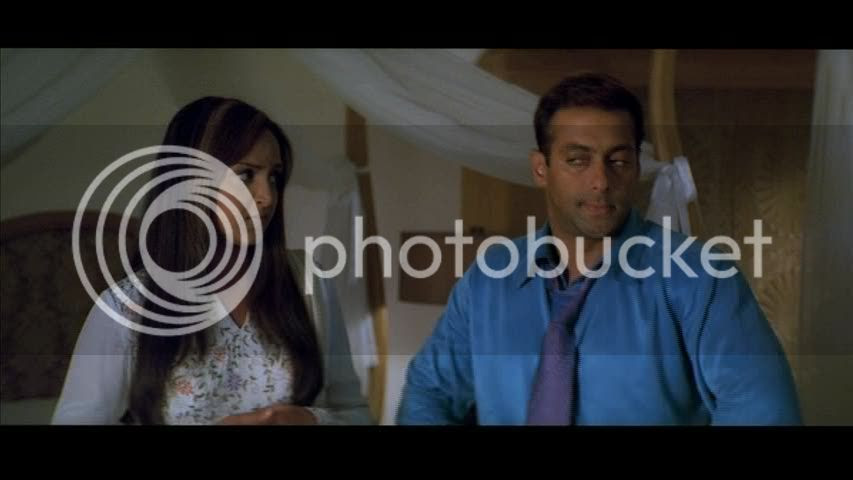 Salman was really good at acting so... smarmy.

Some say comedy is a difficult thing to translate. So much depends on the nuances of culture and language. We would say that's true sometimes, but not always. There have been several "foreign" comedies that have made us laugh - e.g. Om Shanti Om, or some nice old psychadelic-hangover masala - and there were even some scenes in this dismal film which yoked a chuckle. Even the broad slapstick of Anil and Fardeen's "Kahan Ho Tum" song was pretty funny.

Indeed, comedy's not the problem. Whether it's a comedy or a drama, when the whole modus operandi of the film is about conning women, using women and degrading women... it's never going to be good. And so we found ourselves ready to take a spoon to our eyes and set fire to our Anil Kapoor Fanclub membership card as this film torturously wore on. What's even more irritating was the whole "meek man"/"fiery shrew" dichotomy - bumbling Kishan has never actually done anything wrong. See? That way, he's morally spotless but can still have an "zany adultery comedy" anyway.

In maybe the film's most misguided scene (as we think this scene was supposed to show us just how "spotless" Kishan was), his nagging wife finds him coming out of a home after exchanging loving cuddles with a random woman and her daughter. Admittedly, anyone would be a little suspicious in those circumstances - but Kaajal is a caricature, and so she's fuming. When she confronts him, Kishan immediately explodes - he punches her in the face and rages about the horrible family situation that said woman is involved in (her husband, Kishan's ex-colleague, lost his legs in freak accident, now scraping to get by, Kishan's merely providing financial help on the sly, they're a proud family, blah blah blah). 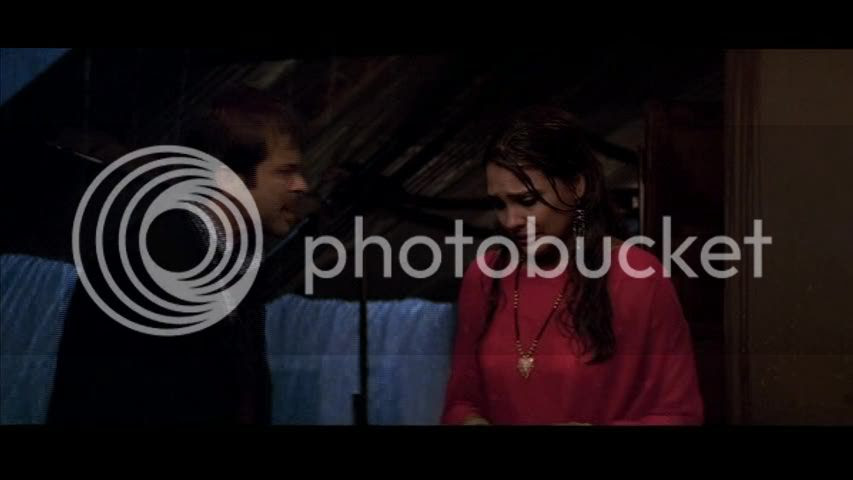 What the hell is going on?! ARGHH!

"You have crossed all the limits of suspicion, Kaajal!" Kishan roars. "I regret having married a woman like you and ruining my life!" Yes, of course, because Kaajal knows she's in a frickin' Hindi movie where these sorts of coincidences and tangential melodramas are commonplace. WTF, Kishan character? And WTF, Anil Kapoor, for being in this scene?! And Boney Kapoor, Anil's brother, for putting money in this project?!

Anyway, Kishan then feels terribly upset about losing it - and OMG, thank you, Anil, for salvaging some relate-able sympathy from this mess of a scene - and hesitates about cheating on Kaajal... before trying to anyway! SIGH. EARTH-SHATTERING SIGH OF SIGHNESS.

What's even worse: we didn't even have fun tearing this apart like we did with that other very well-made-and-yet-evil film, Jab Jab Phool Khile. PPCC readers should be well-aware of how much we love Shashi, and how we've just recently signed up for the Anil Kapoor Fanclub. Today we feel more betrayed by Anil's carelessly vapid comedy than Shashi's preachy backwards melodrama. This was so much worse because every scene is infused with a supposedly "light-hearted zany comedy" vibe. At least Jab Jab was earnest in its stupid ideas - it was seriously trying to argue a point, a bad point, but, well, a point nonetheless - this film just assumes we're already on-board with the whole "Hee hee, lying to your wife is so hilarious! Women are so stupid!" mentality. Ugh, but it's not. It was like the worst of those masala subplots blown up into something protracted and painful. We are becoming even more concerned recently, after seeing that Anil teamed up with Ram Gopal Varma, Bollywood's Misogyny King, to produce and star in a film called My Wife's Murder about a meek husband driven to kill his nagging wife. Dare we place all our hopes in the flawed feminist Lajja? Rum, you're the president, help us!

"But surely, PPCC," you say, "there must be something salvageable from this experience?"

AUughh. Well, maybe. Apart from being surprised by Salman Khan's comedy - he was actually quite funny as the smarmy Prem - we also greatly enjoyed Lara Dutta. And her jodi with Anil - at least, in that one moment when they were dancing so excitedly in Mauritius - was awfully cute. If they team up again - and insha'Allah, never again in something like this - we'd be happy. 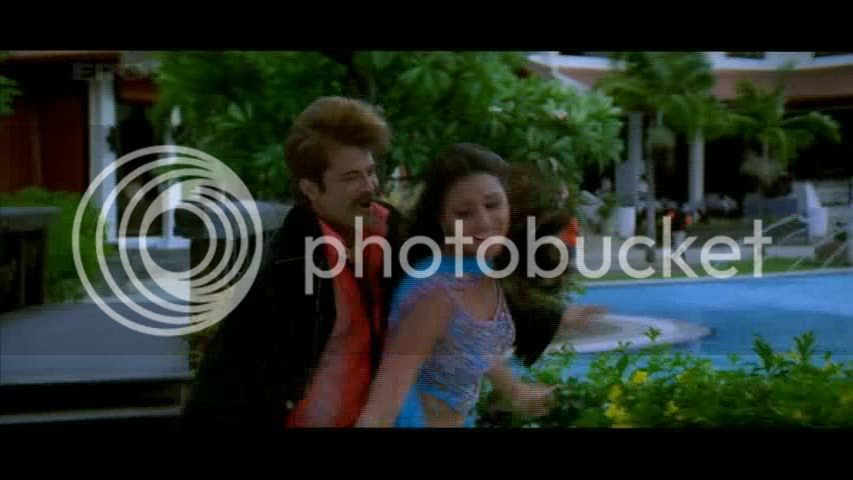 Maybe if we close our eyes and ears and brain and pretend this was the whole movie, everything will be OK.

Edited to add: Oh yeah. After looking at our notes, we found one of the worst howlers of them all: a scene where Anil and Fardeen are stuck in the comedy of errors' web, and they begin spinning a yarn that Anil's wife went insane... after watching 9/11 on television. And - even worse - this isn't the only 9/11 joke in the film!!

Posted by a ppcc representative at 00:32

Hmmm...maybe he needed the money. Or was doing his brother a big favor. Or....*voice trails away*

I feel your pain. Misogynism is always a deal-killer for me too. Will avoid this one, yaar!

I too hate theses movies mostly, however, you have to think of the ambition behind these movies as something of a typical Adam sandler movie and then go with the flow.

Oh yes, this one is bad. I saw it in the theater (because the guy who brings Hindi films to town every few months happened to bring it) - and I even dragged two non-Bollywood-watching friends to it. And perhaps the thing that makes it even worse than JJPK (apart from the physical violence, which I had forgotten), IS THAT IT WAS MADE IN 2005, NOT 1965.

He punches her? In the face? Oh Lara Lara Lara. Why would you get involved in such a losing proposition as this film??? Anyway, I'm glad the PPCC reviewed No Entry because I would've seen it for Anil and Lara.

(Side note: Esha looks a heckuva lot like her mama in your screencap.)

Dont remember the punching scene (mentally filtered out, perhaps?) but I do remember finding the jokes funny, if rather dumb. Granted I watched it on TV when I was in a mood for any Hindi movie. Plus, the relief of finding very little Salman Khan as well as the fact that it didnt turn out to be like one of David Dhawan's tasteless marital comedies may have contributed, too!

Nahhiii! Ohhh ppcc is it that bad as jab jab phool khile or are you OTT'ing it? Sorry for the outburst but i did like the movie and fell about laughing in the cinema, but ppcc I don't think he punched lara, he did a filmi Katish slap and ended it there!
I'm sorry you didn't like it, but I loved and ignored the misogyny angle. But my wife's murder is a great film not as worrying as this one was for you

Memsaab - Oh, well, gosh, I'd say see it and maybe prove me wrong? I so wanted to like it.

Beth - Ahh, your review is a lot more even-handed than mine. It was so well-made, and everyone involved - Anil, Salman, Lara, Fardeen - was clearly very good at comedy. I just couldn't get my head around the main conceit.

Ajnabi - Hahaha, well, as Rum is quick to point out: it was more of a filmi slap. I swear I heard the punch sound-effect though: wh-pshhh! Who's Esha's mom?

Bollyviewer - The comedy was well-done, it was just that - as I said to Beth - I couldn't really get into the whole "stupid women" running gags.

Rum - Oooh! I'm sorry!! But dude, he slapped her?! WTF! I actually would have totally been down with a slapping-and-repenting scene if this had been a melodrama - Anil's acting was good enough for that! - I guess I was just annoyed that it took place in a comedy. Anyway, will def give My Wife's Murder a chance... though I also got Aish's Provoked for some gender-reversal compare-and-contrast.

PPCC, if you do not know who Esha's mom is, we will have to revoke all of your fan club memberships for at least a week.

Just stare at her for a few seconds - it'll come to you. And as a hint, as an actor, she does not do her most excellent mama justice.

You are totally right and good to be frustrated with this movie, and even better and more right to write out your grievances in this excellent public forum.

To anyone who wants to see for themselves, holla my way: I have this DVD (no, I didn't buy it; long story, tell you later) and it could use another home.

Oh, you should have asked - I'd have told you it's trash. Anytime Boney Kapoor produces a movie, it's bound to be trash. I can't think of a single movie he's ever made that was ever any good. Well, Khushi but that's only because Kareena and Fardeen clicked in it and it's my shame-watch.

For future reference: any time you see a Hindi movie being billed as a "sex comedy", approach with extreme caution.


Esha can not even be the discarded nail of the pinky of the foot of her mother.

Amrita - Oh, Amritaaaa, why didn't you stop me from watching it?! Actually, I trust you judgment: what do you recommend?

Eliza - Hehe, aww, so harsh! But yes, Hema was and is wonderful.

Amrita - I too love Khushi!!!! No longer shall I live in shame!