That's what we screamed during the climax of Parinda. And that's all we're going to say about that. 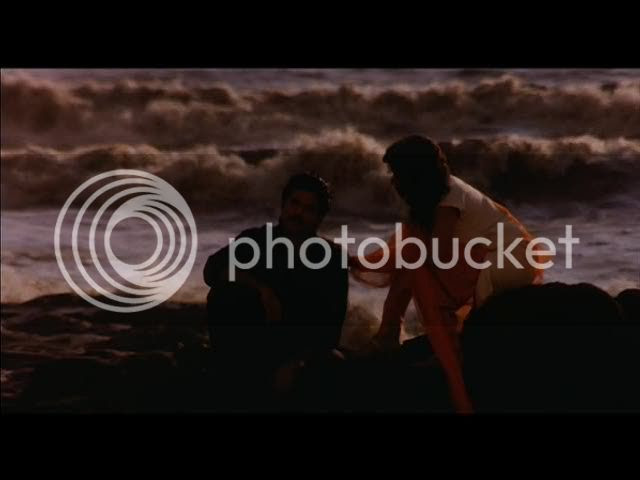 We went down to the DVDwallah today with one goal: to officially join the Anil Kapoor fanclub. Several people had suggested Eeshwar as a good Anil-classic (classil?), but DVDwallah ji didn't have it. Instead, we made a bee-line for Parinda, attracted by the cover: a thoughtful-looking Anil, a destraught-looking Nana Patekar (another guy we're always saying we should watch more of), a similarly-destraught Jackie Schroff and a dove. "Good times inside!" it promised.

Oh, if only we had known.

Don't get us wrong. Parinda is a very good film. It takes a standard masala mold - the whole two brothers on opposite sides of the law thing - and slowly but skilfully sucks all that is good and warm-hearted out of it. Gosh, we'll never watch those 70s Shashitabh camp-capades in the same way again, not when we've seen the same story treated in such a harsh, unfriendly light. Another review cited this film's importance as being its break away from the world-of-no-consequences masala mainstream and its altogether disturbingly deglamorized portrayal of such a standard fable. We at the PPCC were absolutely shocked by the climax, as it did everything they never do in masala movies - sex! death! consequences! (incidentally, the name of our new band) 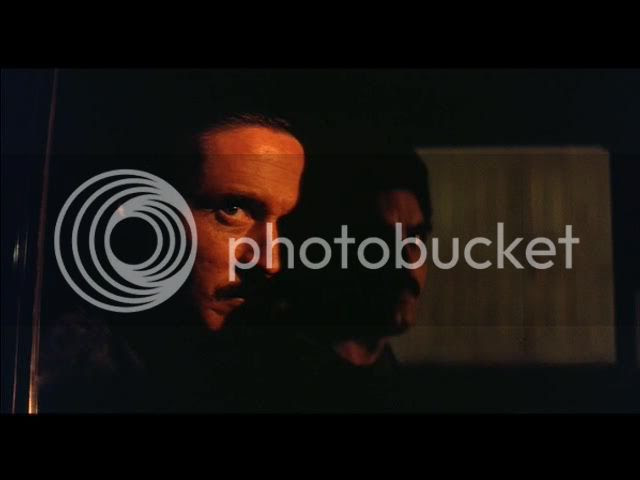 Some tenebroso Tom Alter. Straight out of Caravaggio! 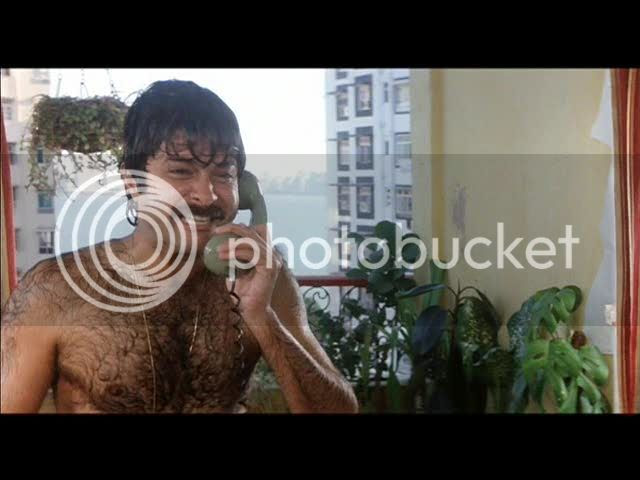 WHOA! GOT ENOUGH HAIR ON YA, BRO?! Not to tease Anil too much, but we seem to recall his manboobs in Tashan as being clean-shaven.

The plot's set-up is deceptively standard. Older brother Kishen (Jackie Shroff) works as sidekick-hoodlum in a Mumbai gang led by the crazy and soulless Anna (Nana Patekar). Kishen and Anna are constantly tormented by the hard-nosed police inspector Prakash (Anupam Kher), who keeps raiding their godowns, demanding evidence and showing up right after they've killed someone and buried them in the pile of pottery throwaways (director cameo, by the way!).

Kishen's quite content at puttering along in his low-life, and he's good at his job -for example, he manages to ninja his way up to meet their arch-nemesis, Musa (Tom Alter), where others had failed. But news arrives that his younger brother is soon returning from America, and Kishen anxiously works to cover up his work in anticipation of bro's arrival. Younger brother finally arrives in the form of a mulleted muppet named Karan (Anil Kapoor), who spends a lot of time bouncing off walls and emmiting Goofy-like chuckles ("Ah-hyuk!" and Rum's favorite: "Haah heyyy!"). An exasperated Kishen tries everything in his power to keep the rambunctious Karan safe in the apartment, but no luck - Karan can't resist going to meet his old childhood friend... Prakash the police inspector! Despite Kishen's efforts, Karan and Prakash meet, and the gang of goons take the opportunity to assassinate Prakash.

This opens up a whole can of worms. Prakash had been about to tell Karan about his brother's real work, and Karan had been about to tell Prakash about how he wanted to marry his sister, Paro (an underused Madhuri Dixit). After much destraughtness and crying and wailing and melodrama and horrible moments of misunderstanding and even worse moments of comprehension, the plot delineates: Karan is now on a suicidal mission of revenge against the very people his brother works for. 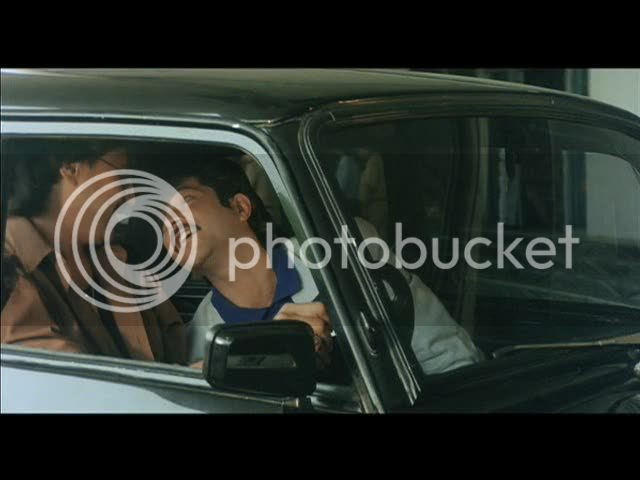 The fraternal Jackie-Anil jodi was so keee-ute, with much Grown Men cuddling and tickling. 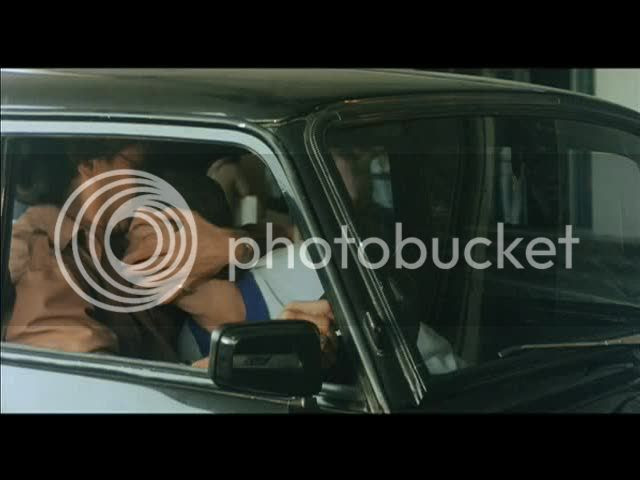 It also brought to mind the recently-reviewed Yuvvraaj. We must protect Anil forever!

Overall, it was a very well-put-together film. Unlike the leisurely pacing typical of other masala films - where we get time to invest emotionally in the characters - this film just rolled with the punches. See older brother? See younger brother? See DEATH AND DESPAIR AND TEARS AND RAPID-FIRE IDEAS AND POTENTIAL RESOLUTIONS DASHED AWAY. Goodness me! We were on the edge of our couch. What a nail-biter!

We can also compliment the direction - apart from the overuse and misuse of token Western classical pieces (the intro to Swan Lake? the intro to Ride of the Valkyries?!) - it was all lovely shots with brooding lighting and fun symbolism. The use of doves (and, well, pigeons) was cute, and they seemed to be released in packs for maximum symbolic effect - oops, there goes Karan's innocence! All the performances were good: Nana clearly relished his role as such a volatile, frightening villain, and Jackie and Anil really did look brotherly (not just because they share the forbidding mullet-moustache combo). Even the supporting cast was pretty impressive: Suresh Oberoi - which PPCC readers will recognize as he who almost tore Shashi and Smita apart - sketched a wonderful mini-portrait of the coke-sniffing, flute-playing goon, Abdul. Tom Alter's presence felt a little like a masala hangover, but he surprised us as well.

The cons? Well, first the film was about as un-women-friendly as you can get - this was a world of fathers, sons, brothers, and male friends, and poor Madhuri was there, it seems, only to comfort Anil after his various revenges and then go through the obligatory wedding scene with him. Second, for a score by the wonderful R.D. Burman, the songs were often jarringly out of place as the film's tone grew more and more serious. We already mentioned the silly clips of Western classical. And finally, gosh, we could have used a happier ending.

Posted by a ppcc representative at 08:00

Despite the end (and I like to insist on happy) I really liked this film. It spawned a whole lot of copycats in its wake, and sort of helped the "masala" film grow up (not that we really want it to!)...but as you say, consequences!

I haven't seen this one, but I'm with you on the Anil watching binge!

Let's bring some late 80s/early 90s Anil back to the Internets! Woo!

Poor Madhuri, though, it's really too bad that her prime corresponded with a particularly bad time for female roles in movies... :(

I'm glad someone will be taking a look at the lost years of the late 80s and early 90s, and I'm equally glad it is not I. Do report back from the field.

Annnniilllll!JACKKIE! I adore this movie, Vidhu Chopra was always a great guy to utilize Anil to best of his acting, and I think I'll have to make everyone move to the Anil Kapoor Masala State of my Masala Pradesh!
Ppcc you are a worthy candidate for vice-prez of this state! Parinda is one of my faves, especially when i had a Barsaat Cry in the climax!

Memsaab - Gotta agree. It was horrible, but it was very well-done (and, I guess, a much more realistic take on the 2 bros fable). Still, it killed me. Sad!

Filmi Girl - It really is a binge. It's like crack. Don't worry, I just got my hands on another handful of movies - prep yourself for a tsunami of mullet!

Beth - Anything I can do to serve my fellow Masala Pradesh citizens! MP unite, we have nothing to lose but our good taste!!

Rum, you wordsmith, you: "barsaat cry" is my new favorite thing.

Why all the nerd rage on a well-crafted movie? Rip on a movie that deserves mockery. Pretentious douchebag much?

Anonymous - What? This is a positive review. Please, read before you troll (though I guess that goes against troll philosophy...).

NO word on Jackie? To me this was Jackie's movie all the way-Anil was just the catalyst.....I thought Jackie brought a lot og gravitas to the movie and was its most sympathetic and torn character.

Parinda will always be remembered for jackie's rivetting performance,and deglamourizing the underworld. Sad that jackie could never better this