The Curious Case of Benjamin Button (2008)

For a study in impermanence and the ephemeral quality of life, The Curious Case of Benjamin Button is awfully long. That is to say, it drags... and drags... and drags, clocking in at a seemingly interminable 2 hrs 48 min and proving that, as its theme implies, time is all about perception. For some, it gallops; and for people watching this film, it crawls, oozes and stutters. 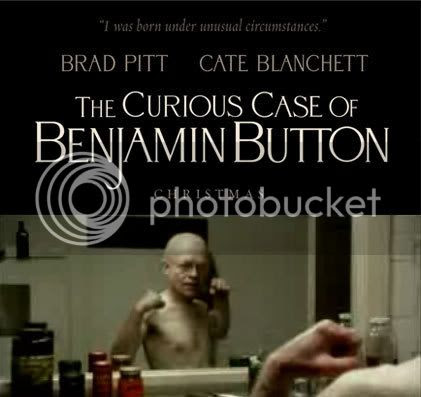 In one word: bland.

The film is based on a "neat" idea: what if a man was born who aged backwards? Loosely based on a short story by F. Scott Fitzgerald, we follow the life of Benjamin (Brad Pitt), born in 1918 at the age of approximately eighty. Abandoned by his grieving, distraught father (Jason Flemyng), he is raised by a stereotypically fiery mother hen, Queenie (Taraji P. Henson), in a - wait for it - old people's home. The characters in the film acclimate to Benjamin's bizarre aging about as quickly as the audience does - that is to say, within a few minutes. Unfortunately, then we must watch Benjamin as he meets new people throughout his entire life and has to explain, again and again, to the bewilderment of his new friends, "Yes, I actually age backwards." Isn't that neat?!

Death is everpresent in this film, as Benjamin's life is actually narrated via a diary to the elderly Daisy (Cate Blanchett) in her last hours. Benjamin loses many people throughout the film - both those close to him and those far - and funeral scenes abound. But we think the film is really about the typically Buddhist ideal of impermanence - that is, nothing lasts, and it's only in clinging to things that we suffer. Benjamin's story is then like a Buddhist moral fable. His bizarre aging is inextricably linked to a legendary clock which runs backwards. The clockmaker - the legend tells us - built it to run backwards in the hopes that life could go in reverse, and his poor son, who had died in the First World War, could come back to him. Benjamin is then the incarnation of this desire - the desire to turn back the wheels of time, literally. Yet, as Benjamin learns during the plodding narrative, nothing lasts forever, and his "blessing" of getting younger, stronger and Brad Pittier with each day is just another form of the curse we all have to live with: things change, we are born to die.

This ephemeral quality is further reinforced by Benjamin's relationships. His love story with Daisy (which disgusted Ebert) is another example of impermanence: the two lovers have only a brief window when their ages match enough for the romance to be, well, not so freaky. Meanwhile, Benjamin's wide array of colorful friends - like grizzled tugboat Captain Mike (Jared Harris) and stiff upper lip British diplomat Elizabeth (Tilda Swinton) - come and go. Like most biography films, these relationships are tinged with wistful nostalgia. 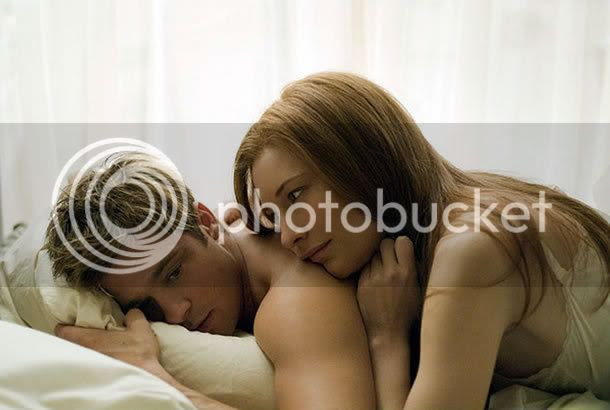 Brad Pitt and Cate Blanchett in one of the few moments when they look like themselves.

With all this "everything ends!" doom and gloom, there is a quite nice thematic undercurrent of making the most of the borrowed time that we're all living on. When Benjamin takes a brief, unexpected excursion to India (!), he muses about how life is what you make it, and second - third - fourth chances abound. He encourages the viewers to have the strength to reinvent themselves when they start stalling, and, indeed, several characters also embody this theme: the same Elizabeth, for example, swims the English channel again (yay!), there's the running joke about the man who has survived getting hit by lightning seven times. So just because everything has to end, it doesn't mean you shouldn't make the most of what you have now. That was a nice celebratory little note.

Too bad the film was so gosh-darned... boring. Since the "look! he gets young as he gets old!" thing gets old (da-dum-bshh, thank you, thank you very much) really quickly, we're left waiting for the next Staple 20th Century American History Moment. Written by the same man that wrote Forrest Gump, another tale about a social pariah living through all the milestones of 20th century American history, we just kept waiting for Benjamin to tick all the boxes: World War II, check. The Beatles, check. The frustration, then, was how little this history was mined - we got barely a sense of context. Considering the film was supposed to take place in the South, pre- and post- the civil rights movement, and considering Benjamin was a white man raised by black parents, we expected something significant to be made of race relations. But - nothing! The film seemed to pretend racism never existed in the South. Apart from Brad Pitt showing up in thick framed glasses and some 50s jazz sometimes playing, the film just didn't seem to concern itself with time and place. Odd considering how integral "the now!" was to the story!

Oh well. When the special effects were the most engaging part of the film (that aging makeup was pretty spectacular, relatively speaking), you know you're in a pretty soulless film. 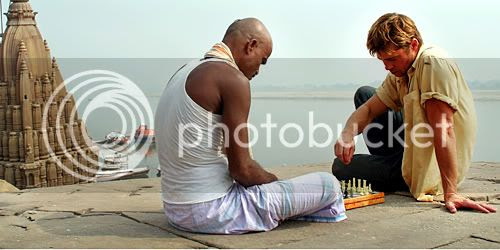 A pretty cheap throw-in moment of exoticism. Hey, if Brad can get spiritually enlightened in India, so can the PPCC! Back to Bombay we go! Ani-i-i-il, save us!
Posted by a ppcc representative at 20:00

Sounds so good! I'm totally seeing this this weekend- Cant get enough of Tilda, plus LOVE Brad's 60s look in the promos.

Hmmm. I just read this short story though have loved Fitzgerald for ages. Not sure what tho do.

Shweta - Good luck! I found this really dull - kind of wished they had had a better editor, since the film's themes were interesting and the idea is certainly fun. It just went on and on though.

Beth - I would say wait to rent on DVD, unless you're a HUGE Brad Pitt/Fitzgerald fan.

Oh, no! I'm so disappointed...When I heard this plot outline, I was super excited. And even while reading your review, I kept shaking my head going, "Gosh, but it sounds so good!"

I have to be in a Brad Pitt mood to watch his films, though, and have mixed feelings about him most of the time. I'll probably try this when the DVD comes out.

Off to see it today! I'm a HUGE cate blanchett/tilda swinton fan!

Great review, I totally agree with all your comments on the movie.

I thoguht the beginning was really promising, story seemed to be going good in the first half an hour, but after the first hour I was just waiting for the button thing to end so that I could say I watched it. Totally boring second-half for me, where nothing much happened, BP stood around staring and a voice in off had to tell us all the imp bits despite having 2 hours of movie time to do it.

However, many many people have liked it so I think I am in a minority here. But I like your carefulness in reviewing films.