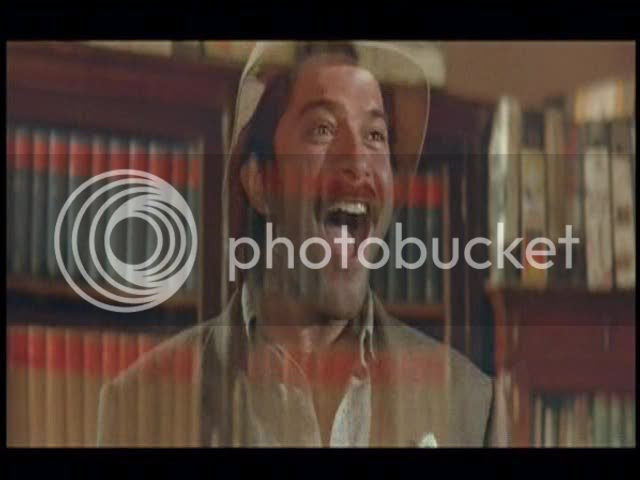 Honestly, the sub genre of "zany comic book movie where Anil Kapoor plays scruffy common man superhero who ends up saving India from the evils of Amrish Puri" is SO FREAKING AWESOME. Okay, so there have only been two films in this genre so far: the highly fabulous Nayak: The Real Hero and the similarly fabulous Mr. India. But it's great! They should make more! Indeed, Filmi Girl recently noted that it's high time for Anil Kapoor to step into some sort of superhero role - and we agree. But don't give the man a cape, just give him his mustache, a big ol' heart and some wacky hijinx - and behold the awesomeness!

Mr. India, for the two or three of you who haven't heard of this film, is about a scruffy violin teacher, Arun (Anil Kapoor, in a strangely appealing mullet). Arun's just a regular guy with a heart of gold, and he runs a makeshift orphanage in his massive house by the sea. With his greasy cook, Calendar (Satish Kaushik), Arun struggles to make ends meet, but, alas, sometimes the kids go hungry for the day (also, none of them seem to go to school). One day, after threats of eviction, Arun and Calendar hit on the idea of subletting the attic flat to perky journalist Seema (Sridevi). The only problem is - Seema hates kids! Hilarity ensues. 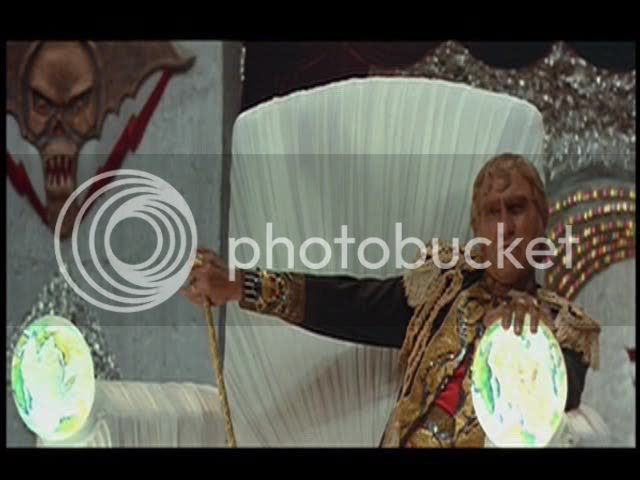 We need a chair like that. IN THE PALM OF OUR HAND, MWA HA HA!

Running tangential to this (relatively) normal plot, there is the evil Mogambo (an amazing Amrish Puri) who, with his evil henchmen - Daagat (Sharat Saxena), Teja (Ajit Vachani), Captain Zorro (Gur Bachchan Singh), Dr. Fu Manchu (?!), and evil English Mr. Wolcott (Bob Christo) - plans to destabilize, subjugate and destroy India. "MOGAMBO... KHUSH HUA!!!" ("MOGAMBO... IS HAPPY!") Mogambo often bellows in that wonderfully bug-eyed way. But as happy as Mogambo is, the job is still not complete: he needs the legendary Invisibility Formula™! And who should have developed this formula but... Arun's late father! When family friend, Professor Sinha (an unexpected cameo by Ashok Kumar!), manages to deliver to Arun the Invisibility Bracelet™ - well, you can just imagine the wackiness which goes down. Arun, now armed with invisibility and a new name, Mr. India (!), becomes a champion of justice and a major thorn in Mogambo's side. Much, much hilarity ensues.

Now, the reason we group Mr. India with the later Nayak is because both films are superficially comic books stuffed full of ridiculous moments, yet within both pumps a real, earnest heart. They don't tease or undermine the very real problems that the hero has to tackle (even if, okay, those evils are embodied by the cackling Amrish Puri, who Western audiences will recognize from Indiana Jones and the Temple of Doom). Corruption, adulterated foods, poverty, drug smuggling - this stuff really happens, and the filmmakers know it. And even on a micro level, the emotions are played straight. Robots or pot people might be lumbering by, but the emotional core is genuine. For example, in both films, tragedy strikes and the hero loses someone close to him. And, in both films, thanks partly to Anil Kapoor's awesomeness and partly to the director's wisdom, the scene is played straight - it just really is sad. In fact, we're a little embarrassed to admit this, but we actually cried when it happened in this film.

Moving speedily along, it's a little difficult to review a film that's already a cult classic - how can we say anything new? Instead, we can point you in the direction of BollyBob's, Carla's, or Prof. Lutgendorf's review. They've covered everything. So what can the PPCC offer?

Well, not much! You just have to watch this film. If you don't find yourself smiling like an idiot through most of it, you've probably got some adulterated heart of STONE. Some of the major selling points are: 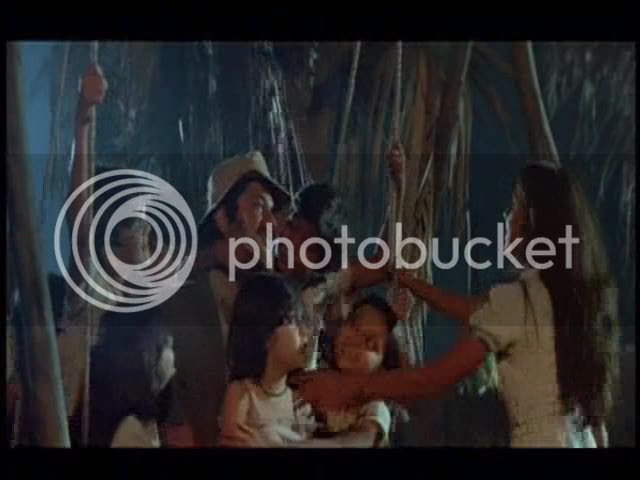 The PPCC has a not-so-secret fantasy to one day have a brood of children, just a big ol' pile of them, pound puppy style. Lucky Mr. India's already got that! And goodness, these children are wonderful. We especially loved the ones who breakdance throughout the entire film (they're electric!) and the slightly nerdy sidekick. 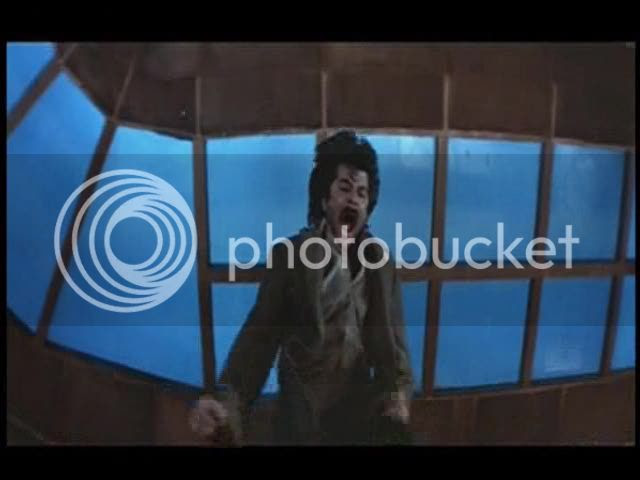 Although we joined the Anil Kapoor Fanclub because of a relatively subdued scene (and no, we will never stop finding opportunities to plug that song), we've gotta say he works his mustachioed magic most in the moments when he just flips out like some demented nutcase.

Hey, Shekhar Kapur's Shekhar Kapur. This is the guy who made Masoom, Elizabeth, Elizabeth: The Golden Age and The Four Feathers. This film may have been lo-fi, but the filmmaking technique is so smart that - man, we totally lapped it up! You'd think a sci-fi fantasy with low production values would only be worth a snicker, yet so many of the scenes - like the one where Arun discovers the invisibility bracelet for the first time - were exhiliratingly zany. 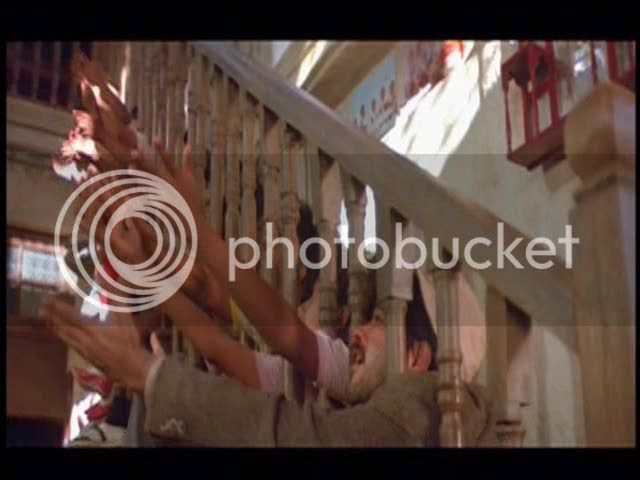 From the fun medley. 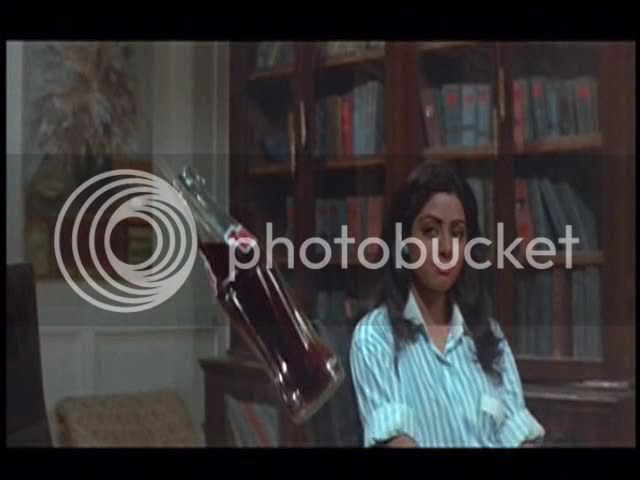 We love it when Sridevi goes, "Heeeeee!" in that airy falsetto.

Sridevi had to work pretty hard to earn back our affections after Lamhe, but she succeeded - what with her impromptu Charlie Chaplin impression, eating the fruit from her own fruit hat, or just generally kicking various henchmen's butts, she was great!

Is it true, internet?! But without Shekhar Kapur directing?! Well, either way, we're obviously going to be there, first show, first night.

Posted by a ppcc representative at 13:42

No Ardh-Satya yet?? Am surprised. I'm telling you it's not complete without Ardh-Satya...certainly not if you're such big fan of Naseer-Om as you claim to be..:)
If you can get over the guilt of copyright violation then let me tell you that the greatest 'tube' of all time has got it in its treasure... Enjoy!!

PPCC - I loved Mr India! It was my first Bollywood movie, and I watched it after stumbling home from the pub one night and accidentally finding it on telly. Normally I hit the fast forward at the first sign of a singing orphan (Why did they need them in the otherwise wonderful "Affair to Remember'???) but these ones were cute , feisty and Sri Devi didn't love them at first sight either. Anil was good, Sri Devi was hilarious and beautiful, and the songs were brilliant. I quite liked Anil when I saw Mr India, but then when I saw him complete with straw woven in to his backhair from a roll in the hay in Jaanbaaz, I did change my mind. So let's move on from that image...
Other things I enjoyed - I do like a good lair, and have discussed that with the lovely Beth - and Mogambo has a ripper. I liked the setting of the movie, the house, the general production design.
Mr India to me had a nice optimistic, open hearted love of life kind of vibe, even when characters were confronting troubles. By the end of the movie, I had sobered up a bit (but not so much I had pesky questions) and fallen in love with masala-dom.

Sorry another YAAAYYYY for this movie, I love it as much as I love chocolate cake, its just sooo fun and reminds me of my childhood watching this in england while doing the wiggly dances Aftab was doing! I also love how Aftab through pie plates at the villains in the end, it completely influenced my journalism career coz if i don't like a movie I'll say its pie-throwing worthy!

Vismrit - Guilting me into Ardh-Satya! OK, OK, I'll go look out for it.

Temple - What a great story! And what an introduction to Bollywood! Ah yes, the Jaanbaaz roll in the hay is becoming infamous on the PPCC comments section... I'm starting to want to perversely seek it out.

Rum - Which one's Aftab? Was he one of those AMAZING breakdancers?! They were incredible!

I hope that someday I may again enjoy the goodness of Mr. India without the unfortunate Jaanbaaz imagery interfering.

My favorite line from the film: Use this money to ruin and destroy other things (see my post on Mard for a screencap)...

EEEE! I'm so glad you liked this movie!

Miss Breezy Breeze is amazing - I love that song so much.

And I totally cried at a certain part in Mr. India that involved a certain tiny orphan...

Thou hast drunk the Koolaid, for lo! thou didst refer to the haircut of which we do not speak and called it "strangely appealing."

My favorite part of Mogambo, apart from how his outfit coordinates so well with his lair decor, is how he drums his fingers on those light-up globes on his chair. SMACK SMACK SMACK. Very ominous and I'll-show-them-who's-boss-y.

Memsaab - Ahahaha! HAIR. HAIR. Yes, that line is a CLASSIC - I immediately remembered your screencap of it. It made me very khush hui.

Filmi Girl - I LOVED this movie. Man, becoming an Anil Kapoor fan was such a good idea. You cried too! I feel much better now.

Beth - I have, it's true. I even liked the mullet he sports in Ram Lakhan. It's getting sick. BASEMENT CAT! Who's ceiling cat, then? I vote Ashok Kumar. I love how Lutgendorf describes Mogambo's attire as "suggestive of a Latin American dictator dressed by early-glam David Bowie"! Heee...

This is a great blog. I got here via a search on Mr.India .. will be back in a couple of days.

nice blog guys......I was in search of mogambo when i stumbled upon it. Keep up the good work.

It seems that the year 2016 will be the year of clashes of Bollywood films. Few days back, Yashraj Productions have announced the Release date of their next big venture ‘Sultan’ starring Salman Khan on Eid 2016 which is clashing with another big film of Shahrukh Khan ‘Raees’ and now two big films will again clash on the Independence Day 2016. This time the battle is between Akshay Kumar and Hrithik Roshan.