A Wednesday contains an interesting kernel of an idea - the rage of the common man against modern terrorism - and wraps it in fairly philosophically over-the-top vigilantism. This film - which is brief and offbeat (masala free, songs free, folks!) - is a bit difficult to review without basically giving away the entire story. So we're gonna stick a big fat

for those that want to see this. Basically, in a nutshell, we think it's worth a single viewing, though it doesn't offer any particularly profound, realistic insight into terrorism. If you want something more thought-provoking, see Dil Se or Black & White or Droh Kaal.

The story takes place in present-day Mumbai. A nameless man (Naseeruddin Shah) goes around placing unattended luggage in sensitive spots - the crowded railway station, the police headquarters' bathroom - and then climbs to the top of a Mumbai skyscraper and calls up Police Inspector Rathod (a very restrained Anupam Kher) with a bomb threat. Initially, the film unfolds in a generic cops/terrorists way: the nameless man makes various demands - bring these four prisoners with known Al-Qaeda links to this airport, where they will be freed - while the police frantically work to trace his whereabouts. 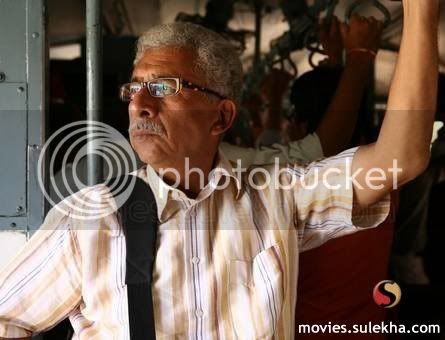 The interesting stuff happens in the end, when we learn that the nameless man was not some psycho terrorist mastermind, but rather an aam aadmi ("common man") intent on justice. Rather than freeing the four terrorists, he plants a bomb which kills three of them, and then threatens the police: "If I don't see [the surviving terrorist prisoner] dead on the news tonight, I will detonate the other bombs." The aam aadmi Naseer, you see, is tired of living in fear. He wants to be able to ride the trains and buses in peace. He still remembers the poor young fellow who used to always ride the same train with him, and who was later killed (it's insinuated) in some bomb blasts. So, because of his rage, he decides to take matters into his own hands - capitalizing on the terrorism-inspired paranoia he so despises to exact vigilante punishment on a randomly selected group of terrorists. His real identity - most notably his religion - is never revealed, as he represents only the Common Man.

A story like this can't really sit well with us. Even though, in the end, the aam aadmi vigilante was bluffing - there were no other bombs - it still didn't seem philosophically acceptable to threaten war in the name of peace. We can understand the appeal of taking matters into your own hands - the people's hands - in a country with a notoriously corrupt and inefficient judicial system. Heck, the fantastic Nayak was just one long, prolonged "aam aadmi kicks ass" fantasy. But, well, if there's one thing Anil Kapoor Month has taught us: it's that the aam aadmi shouldn't bypass the system to get revenge... especially when trying to improve the system! What were Shakti's last words in Virasat? "Send your kids to school! Respect the law!" That is, use the system - improve the system - don't complain about it and then go around it anyway. Naseer's Common Man is, instead, bending the system to his will - and all, ironically, in the name of bettering society. And, even if he was bluffing, surely he undermines his own argument by capitalizing on the very paranoia he despises? 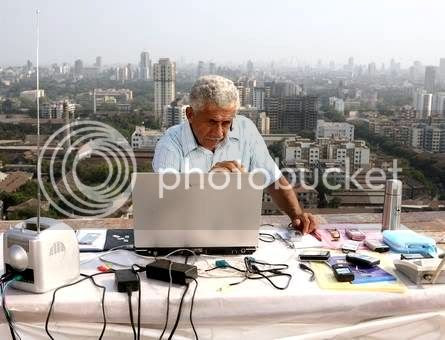 Anyway, the film doesn't worry too much about all these anarchy/populism ethical conundrums. It takes a more simplistic view: "Terrorism is wrong! The common man fights back! Cool!" It sympathizes and reveres the aam aadmi's vigilantism. For example, once his motives are understood by the police staff, no one wants to pursue him. When Inspector Rathod finally catches him, he just introduces himself, shakes his hand, and a voice-over narrates, "I don't know whether what he did was right or wrong. But, personally speaking, that which happened was a good thing." 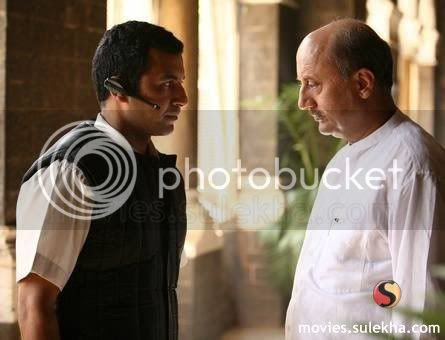 Aamir Bashi and a very effective and restrained Anupam Kher.

The film's main message then, is "beware the common man's anger." Yet while there is a moral pride in witnessing the common man rise up to fight large-scale injustice - whether it be terrorism, corruption, or whatever - this film seems to advocate a sort of fantasy vigilantism. "Type 'bomb' into Google these days and you'll find many ways to make a bomb," Naseer's character explains, implying that, if the common man was inclined, he could easily fight fire with fire - terrorism with terrorism. But how can threatening to blow up a bunch of strangers because you're upset about strangers getting blown up... make any sense? Sure, the common man was bluffing - but since when is calling in a bomb scare an acceptable way of meting out your own private justice? And, most importantly, given how highly unlikely and almost subversively anarchic ("everyone can fight terrorism however they want!") this story is, is there any use to it? Its heart is in the right place, but it didn't seem to think through the ethical ramifications of its message.

Consider a few other films in the "terrorism" genre which, we think, are more insightful. Droh Kaal (which also stars Naseeruddin Shah, incidentally) showed us how fighting evil can ultimately compromise your own morality. Every character in the film - from the police chief played by Amrish Puri, to the anti-terrorism squad leaders (Om Puri and Naseer) and their spies - is eventually forced to make impossible moral choices. In the end, no one is spotless. And indeed, the film proposes the very interesting question: When do the ends stop justifying the means? When does moral compromise become too much?

The more recent Black & White took the expected structure - suicide bomber gives up his life of evil after being exposed to humanity's good side - and switched it around. It's not the love of Anil Kapoor and Shefali Shetty's progressive Hindu couple which changes the suicide bomber's mind, it's their steely resolve in the face of terrible (and communalist) tragedy, and it's the revelation that terrorism is a weapon used in Machiavellian realpolitik. When the idealistic anti-hero realizes that his two most important motivations for jihad - personal revenge due to past family tragedy, and religious fundamentalism - are not what drives others, especially his superiors, he realizes that he's been duped into dying for another man's politics. As soon as he realizes that, he realizes he doesn't have to.

The performances did what they could with the shallow characterizations. Naseeruddin Shah was dependable as ever, though - and maybe we're projecting! - he seemed more a curmudgeonly old grandpa who grumbles at the tomatoes that fall out of his bag rather than some enraged and slightly psychotic anti-hero. We think this is partly a failure of the script - as we said, the film doesn't worry too much about the twisted ethics of its nameless protagonist. Anupam Kher - well, we're always saying that Anupam Kher is a very good actor who sometimes makes very bad choices. We're happy to see him getting a role which lets him be more subtle and serious. Aamir Bashi and Jimmy Shergill were fine in their respective (fairly stereotyped roles): the upright, wholesome and family-man Hindu "good cop", and the hot-headed Muslim "bad cop", respectively. Honestly, all Jimmy Shergill does in the first act is wordlessly walk from scene to scene, punching people in the face.
Posted by a ppcc representative at 13:00

I think A Wednesday is like an extended version of that girls with hockey sticks scene from Chak De that Beth and I saw through different eyes.

Like I wrote in my review of this movie, this is a film that speaks directly to the angry person inside of me. And as Bollyviewer put it very eloquently, that's not a very nice thing.