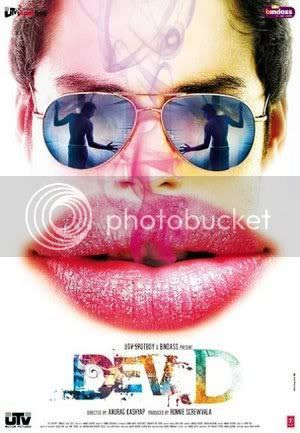 We at the PPCC are getting more and more pumped for the upcoming newest Devdas remake, Dev.D. They say admitting you have a problem is the first step towards recovery, and the PPCC should probably get it out in writing, in a public forum, that we think we're closet Devdas addicts. We inevitably hate every version of Devdas that we see but, like the self-destructive masochistic protagonist himself, we keep coming back for more. When we heard this new version was coming out, we had a private moment of, "Oh God, another Devdas... small yipee!"

One of the things we hate about Devdas - apart from the unlikable hero and irritating storyline - is how the films often mishandle the emotional tone: SRK's glitzy 2002 Devdas seemed to forget that Devdas is a bad guy and over-sympathized with him, Amitabh Bachchan's 1978 Devdasly Muqaddar ka Sikandar just made him a big wet woobie too, Shashi Kapoor's 1973 Devdasly Naina was self-contained if protracted in his morose moping (edges too round again!), and Dilip Kumar's 1955 Devdas... well, that version was actually pretty good.

Anyway, we think Devdas should be all about hard edges. He is, after all, the original anti-hero. You're not supposed to like him, but you are supposed to become perversely invested in him. Think of the other great anti-heroes: Amitabh's Angry Young Vijay, Harrison Ford's excellently studly Han Solo, the drunken and incompetent wet mop that is Konstantin Khabensky's Anton in the Daywatch movies... None of these guys are anyone you'd actually want to hang out with, but they're awfully fun to watch. And between the straight-laced brother and the rascally brother, come on, you always gotta cheer for the scoundrel!

So the most promising thing about Dev.D, if the trailer and music are anything go by, is that they've captured all the rage and horribleness of Devdas. He's not a nice guy, he's a total dick. But he's also quirky and vulnerable: so we get the howling hard rock of tracks like Aankh Micholi and the black humor of Emosonal Atyachaar. And just listen to how the terrible beauty of the love triangle and Devdas' epic self-destructiveness are captured in haunting tracks like Dev and Chanda's Theme 2 or the gorgeous Paayaliya.

There's a frantic energy to the soundtrack - an attitude reminiscent of Kalyanji-Anandji's best stuff where they combined Western sounds with more typical filmi standards and experimented with crazy effects: screams, snarls, ethereal female vocals and massive funk (right up Music from the Third Floor's alley!). The whole fun combination of Punjabi street sounds (Hikknaal, Mahi Mennu), hard rock-inspired growl-fests (Ek Hulchul Si, Aankh Micholi, Dhol Yaara Dhol), drunken horns in crescendo (Nayan Tarse, Saali Khushi), irony-loaded quasi-parodies (Dil Mein Jaagi, Emosonal Atyachaar) and ethereal weepies (Ranjhana, Yeh Meri Zindagi) is pretty awesome in its own right - this is definitely one of the most unique soundtracks we've heard in a long while (though, we must ask, why no qawwali?!). It's also HUGE (sixteen tracks!) and so a full feast of radically different sounds. This is such a refreshing change after those uninspired 4-track soundtracks full of whipped vanilla.

Here's hoping that the movie itself lives up to its huge potential and delivers on all the weirdness, harshness and hardcore punch that Devdas is all about!
Posted by a ppcc representative at 16:29

I went and checked out the trailer, and now I am unabashedly looking forward to this.

And that poster is certainly appropriately disturbing.

Pipped to the post! I love this soundtrack! LOVE IT. I haven't felt this way about a Hindi film soundtrack in forever. And I can't wait for this movie! I want to see it today! Instead, I'll probably watch CC2C and poke myself in the eyeballs afterwards.

I'm disappointed that one of those songs were taken from Metal vs Dugem, but I still can't wait for the film to be released and I'm going to download some of these songs now.

I can't wait to see this film. The soundtrack is great. I like, as you said the urban-Punjabi "Hikknaal", "Paayaliya" (probably a Chandramuki song), "Dhol Yaara Dhol" gets points for it's weirdness, "Duniya" sounds like a missing Lagaan song and "Emosonal Atyachaarindian" with the street band (maybe played during Paro's marriage). Thanks, now I hope the film doesn’t disappoint.

This film has to be seen just for the soundtrack. Couldn't agree more.

Before I listen to the soundtrack, I'll just say that whoever designed that poster might well have a lot of explaining to do - or might prove to be visionary once we have all seen the film and know what they were going for.

You don't want to hang out with Han Solo?!? Are you human?!?!? Even I do, and I usually don't respond very well to the swaggering cowboy type (for ick example, see Captain Jack in Doctor Who/Torchwood; for another guilty pleasure example, see Agent Booth in Bones).

Dude, its not a remake film. It`s an film adaptation of Devdas Novel.

And soundtrack is simply addictive. Can`t get enough of songs like Nayan tarse, Duniya, Saali Khusi, aankh Micholi & of course Emotional Atyachar - The Rock One.

@Kiran - aren't all 'adaptations of the Devdas novel' re-makes at this point? We know the story so well that it would be hard to pull out something new plotwise and it would be hard NOT to reference the previous versions.

And, PPCC, I do share your attraction/repulsion with the Devdas character type... however, I loathe drug films and the trailer makes me think that is what this is going to be. I'll wait until your review and then make up my mind on whether I'd like it or not. :)

Anarchivist - I looooove the poster.

Amrita - I totally second all of your enthusiasm - this promises SO MUCH. And I read Anurag Kashyap's interview at passionforcinema and was just blown away - the plan is for something incredibly subversive and provocative! WHOA!

Anonymous - What is Metal vs Dugem?

Stella_1 - Same here! The songs are fab. Paayaliya might be my fave.

Beth - Duude, I LOVE the poster. His mouth is huge because he's a "debauching sensualist" who'll try anything once. And I initially thought the figures in his sunglasses were women - Paro and Chandramukhi! - but now I see they're men, the SAME man... DEVDAS himself! He's a self-obsessed epicurean! LOVE IT. And the colors - divine.

Okay, yes, I want to hang out with Han Solo, but he doesn't seem like he'd be the friendliest companion!

Filmi Girl - Uh oh, if you loathe drug movies, I can see why this wouldn't work for you - it looks like Trainspotting! Will be seeing this first night, first show (I hope) so will have a review up asap!

Finally listening to it. Wowee! I find it really uneven but always interesting, at least, and that brass band song is FAB.