Welcome has the dubious honor of being the only film the PPCC walked out of in the theatres last year. But wait, we should qualify that: we went to see it knowing nothing of the plot, actors or genre, dragged into it by a pair of Bollywood virginal hard-sells who had just seen Om Shanti Om (their first Hindi film) and decided that all Hindi films must be the same. When our friends starting fidgeting during the whole arranged marriage comedy antics, and when we heard one more goofy "comedy whistle - tooot!" sound effect, we suggested sparing everyone further pain, skipping out during intermission and grabbing food instead. So the PPCC was left with only vague memories of Welcome as being goofy and incomprehensible and bad.

But recently, in the all-forgiving haze of post-Yuvvraaj Anil Kapoor pyaar, we were feeling a lot more... welcoming (COMEDY WHISTLE - TOOT TOOT!) to the film - especially after our reliable taste-sharer Filmi Girl gave it a positive review and we started listening to the soundtrack. Honestly, guys, the soundtrack is so fun - it's like a party in our ears and EVERYONE'S INVITED! "INSHAAAAAAA'ALLAH!" So we decided to give it another shot. 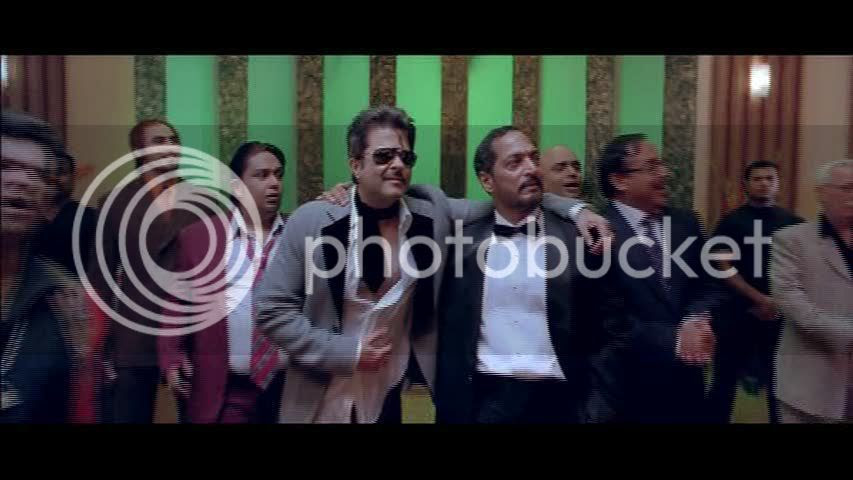 And the movie really works because of the most excellent bromance between our most lovable pair, Anil Kapoor and Nana Patekar.

And we're happy we did! Maybe it's our state of mind - rock bottom expectations, intense devotion towards Anil Kapoor, a long-simmering interest in Nana Patekar, and delight in cameos by Asrani (!) and Ranjeet (!!?!) - but we totally gobbled it up. If liking Anil Kapoor isn't a choice but a life philosophy (post coming soon to a PPCC near you), then Anil's "villain of old tradition" line that "furst impreson ij lasht impreson" can be extended to secund impresons bhi - ek dam jhakaas!

The film's two acts are distinct enough that many of our filmi-friendly work friends commented on the post-intermission decline, and we approached with temerity. Yet they really are equally ridiculous. The first act follows the antics of the sweet, sensitive Rajiv (Akshay Kumar) falling in love with the gorgeous Sanjana (Katrina Kaif). Rajiv's family - headed by his uncle (Paresh Rawal) and aunt (Supriya Karnik) - is obsessed with finding a "decent" family for Rajiv to marry into. Meanwhile, Sanjana's family - headed by her older brother Uday (Nana Patekar) and his dimwit buddy Majnu (Anil Kapoor) - are, of course, mafia dons. The first act's torturous narrative follows the various separations and reunions of the lovers as they try (and fail, repeatedly) to overcome these seemingly irreconcilable differences between the families so that they can get engaged. Much hilarity of the extreme slapstick variety ensues. 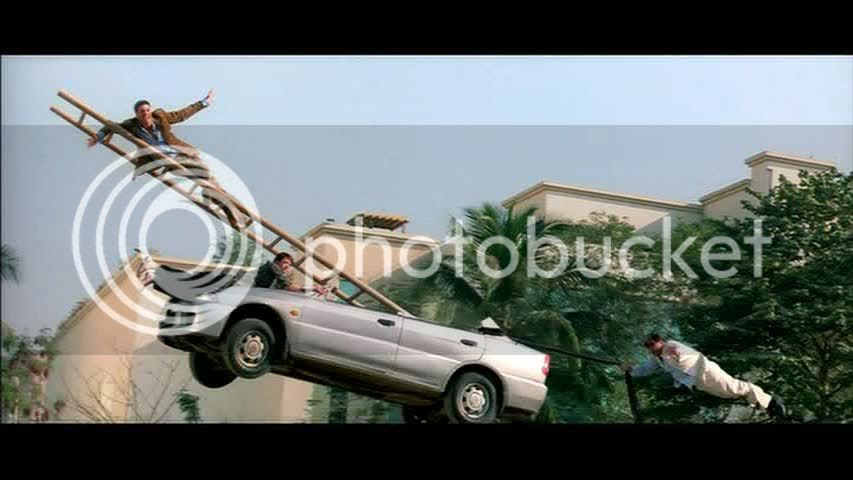 Some really OTT slapstick. Though when Akshay shrieks, "My whole family will be wiped out!" with the steering wheel in his hands, we laughed.

The second act begins with a new tack: since the differences between the two families are impossible, the lovers decide that the easiest task would be cleaning up the mafiosi Uday and Majnu from violent goons to upright citizens. To do this, they go for each mafioso's hidden "sensitive artist" - Uday's childhood obsession to become a film hero, and Majnu's passion for painting - meanwhile sending Rajiv's sister-in-law, Ishika (a very funny Mallika Sherawat), to stroke the mafiosi's egos and con them into pyaar.

The first act is therefore for fans of your standard, vanilla, comedy courtship between cutesie Akshay Kumar and Katrina Kaif, where everyone who is less than pretty is relegated to a comic caricature in the background. The second act instead lets Nana Patekar and Anil Kapoor take center-stage and relies on the kinda-painful, kinda-sweet and very funny ridiculing of the first act's increasingly incompetent-seeming villains. Watching the volatile and violent Uday and Majnu become slack-jawed, cooing fools was oddly cute - and this relies entirely on Nana Patekar and Anil Kapoor, who dispense with all macho strutting and jump arms wide into some very silly antics (fearful Nana in a cowboy hat! Anil reverting to "HAH HEY! AW HYUK!" mode!). 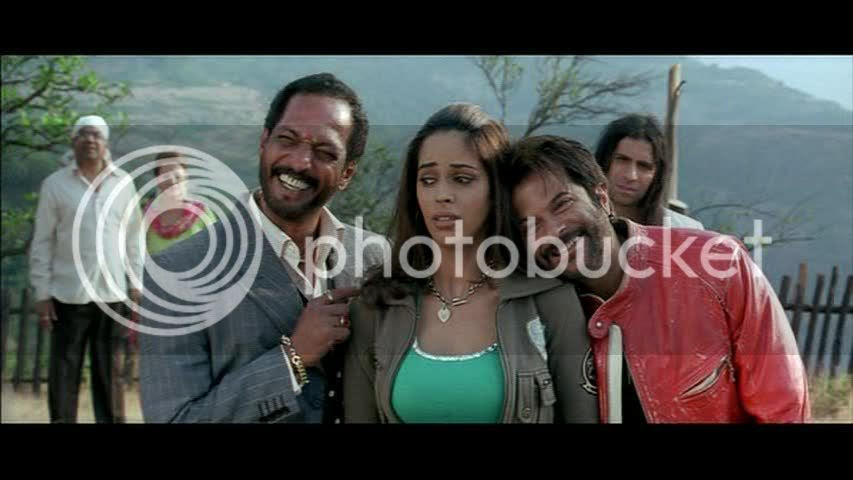 Whadda pair a putzes, these two. And Mallika was hilarious and underused!

The dennoument devolves into a silly crisis surrounding the ultimate godfather, RDX (Feroz Khan), and his undead spoiled son, Lucky (???), and it seems the film's writer, Anees Bazmee, is fond of ending things on a cliffhanger (COMEDY WHISTLE TOOOOOT) - as in the previously PPCCed No Entry - though in this one he ups the ante by adding KILLER, RAGING BEES and everyone getting Morteined in the face. Nothing was making any sense anymore, but that's okay - we were already grateful for the occasional chuckles this silly, blameless film yoked. Plus, it had Om Puri as a narrator! Huzzah! 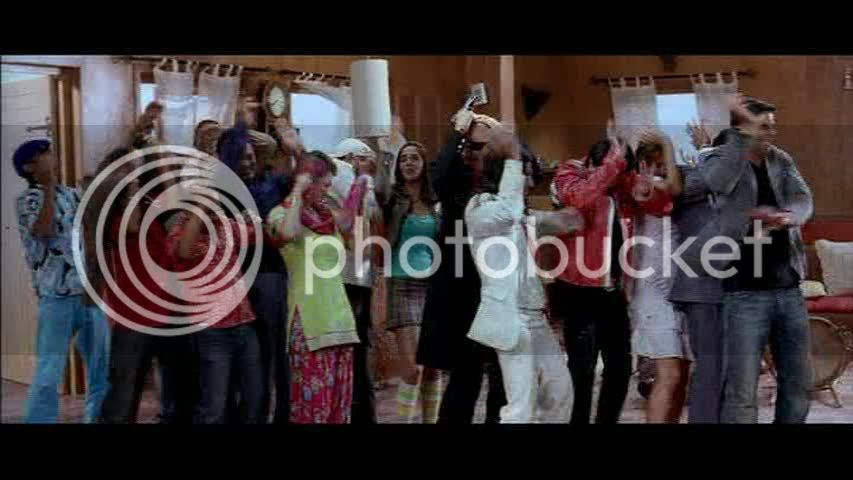 Anyway, while this film made us note how sweetly silly Akshay Kumar is (and how hard it is for us to reconcile his bespectacled goof persona with his buzz cut macho persona), we liked it because of Anil and Nana's excellent jodi power. These two were like aging Wayne and Garth or Bill and Ted, both more than a little ridiculous and completely, unabashedly in love with each other. They also played the excellent Apollonian vs. Dionysian card, with the Apollonian Nana Patekar a straight-laced, repressed nerd with pent-up rage ("Control, Uday! Control!") and perfectly aligned tuxedo jackets while the Dionysian Anil Kapoor is instead the type of guy who wildly bobbles his head while he talks and wildly swings his jacket while he dances. These guys need to hire themselves out for weddings! Or SEQUELS! 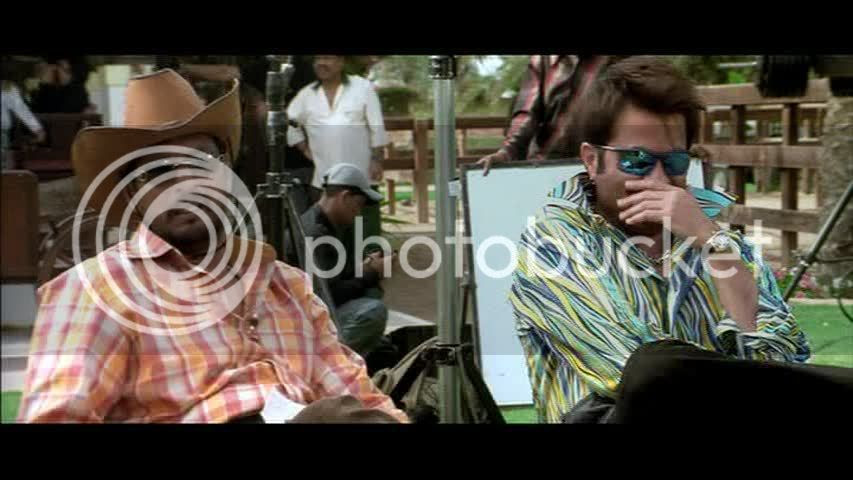 They even coordinate their outfits, CUTE. Side note but Anil wears a shark tooth necklace throughout the film that the PPCC also owns. He shops at Urban Outfitters too?! *PPCC glows*

We would recommend this, though only if you're in a particularly silly, tolerant mood. It's a low-brow populist comedy that doesn't aspire to much, and generally succeeds in being bubblegum nonsensical. Now can we get back to more serious discussions? SUGGESTED TOPIC: Are Anil Kapoor and Gary Oldman long-lost kin of passionate melting down and zany characters? We're not the first ones to think so. Mischief managed!

lol nice review ppcc, i trudged in the snow to watch this and i was not dissapointed too much, but i was more happy to see anil and feroz the most! perhaps coz i've got a janbaaz hangover with those two, they're are soooo HAWT, and feroz as a taklu(baldie) looks great too!

My word verification is "croweett," which I think sounds appropriately celebratory.

This film is really crazy. I went with extremely low expectations, but I had a ball. It was just so weird. And of course, entirely due to Anil Kapoor and Nana Patekar.

I'm so glad you didn't hate "Welcome!" My PPCC-reputation would be totally ruined! I'd never be allowed to recommend anything ever again!

And the soundtrack is really rocking!

Where she thought I would have acquired it is a mystery left to the ages.

Now, can we collaborate on a script that involves a Nana/Anil bromance?! PLEASE!! It will be so good... I promise!

Apropos of nothing...what is up with those comedy whistles? Do a lot of Hindi movies have them? I had to turn off another movie after an hour because the relentless whistles and gongs and hoots and quacks were giving me a headache.

I saw this in a movie theater in Bombay without subs and had a pretty good time nonetheless (although I can't wait to see what subtitles might surface!)...

Rum - Ahhh! I need to see behaired Feroz before I can share your pyaar.

Ajnabi - If you like Anil/Nana/Akshay, it's def worth a dekho - though don't get too excited, it's just a silly, trashy comedy. I'll admit that I laughed, though.

Banno - I think I appreciated the absurd comedy most of all - the bees (?!!) - and their bromantic love!

Filmi Girl - Not hate at all, I'm so happy too! OMG thank you for the Lancelot Link vid, it made my morning! OMG Nana/Anil bromance script, YES PLZ - let's get cracking!!

Brian - Oh, Brian, have you not seen many commercial comedies? You have to get used to the bells and whistles... though sometimes - as in this to some extent, but a LOT in films like Namak Halaal and Do Aur Do Paanch - you're rewarded with some really surreal hijinx.

Memsaab - Sans subs, oh my! You've got to see this with, now.