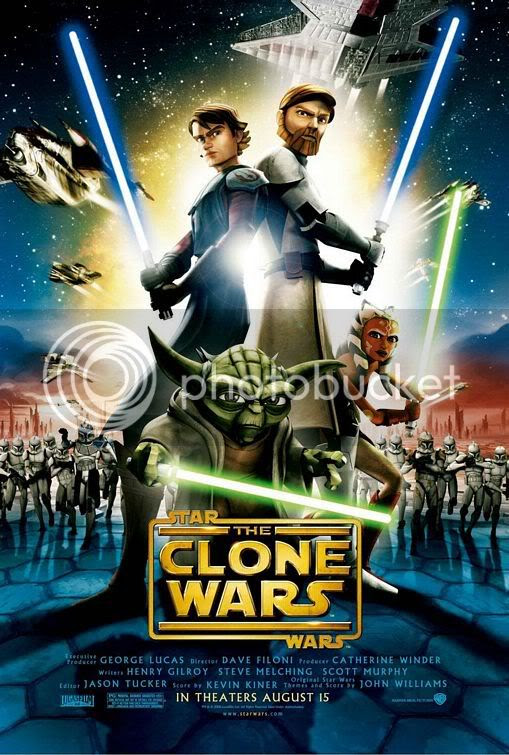 A disclaimer: a long time ago, in a galaxy not so far away, the PPCC became an emotional slave of the cultural empire that is Star Wars. We saw the movies (and bought them several times in several formats, Mr. Lucas!), we bought the books, the comic books, the merchandise. We wrote the fanfiction. We rode the MGM Studios ride, again and again. So deeply enmeshed is Star Wars into our brain chemistry that anything, anything that comes out remotely Star Wars-ish gets an immediate A+ in our books.

So how does the most recent animated Star Wars film, Star Wars: The Clone Wars, rate? A+?

Well, not really. It's more of a C- effort. It's also an easy target for critics of the franchise, as it looks like little more than an effort to milk that tired Star Wars cow one... last... time. (And as Mr. Lucas has had his way, this is not actually the last time.)

A computer-animated film, The Clone Wars offers a standalone snapshot of life between episodes II (Attack of the Clones) and III (Revenge of the Sith). Generals Obi-Wan Kenobi (voiced by James Arnold Taylor) and Anakin Skywalker (voiced by Matt Lanter) are called on to save Jabba the Hutt's baby son, "Stinky" (*sigh*), from a dastardly kidnapping attempt. As with all things in the prequel trilogy, this kidnapping attempt is really a far more sinister plot orchestrated by Emperor Palpatine as yet another move in his labyrinthine game of political chess with himself. Honestly, we have never understood anything that that man says or does in the prequels. Couldn't he have just taken over as Palpatine, Sith Lord of Evil and Your Overlord, without that whole Kiwi clones versus cheeky, junky robots thing? 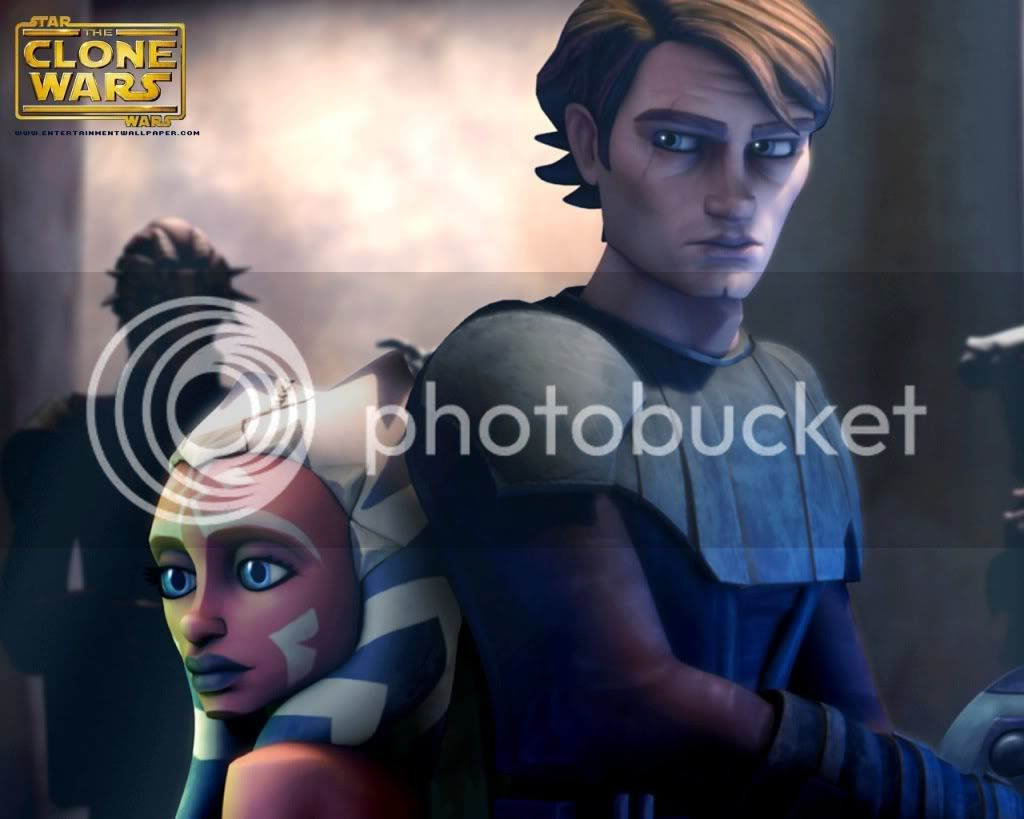 Anakin and Ahsoka. Ahsoka: a subtle commentary on Buddhist politics? Well, probably not.

Anakin unexpectedly gets a fresh, young Padawan to train - Ahsoka (?!) (voiced by Ashley Eckstein). Yes, Ahsoka. No, not Ashoka or Asoka. Ah-soka. So is Ahsoka an NRI? Discuss.

Anyway, this is paint-by-numbers Star Wars. It features all the usual Star Warsy things - elaborate land battles, elaborate space battles, elaborate lightsaber duels and snarky "American cowboy"-style one-liners - except without any punch, without any soul. Alas. Gone is the mystically weird popcorn Zen of the old trilogy. Gone is the admirably confounding political science 101 of the new trilogy. Gone is the edgy fun of the other, much superior animated Clone Wars series by Genndy "genius" Tartakovsky.

Instead, all we have is a lazy rehashing of everything we've already seen before. No insight is given. No interesting plot thing. And not only is it lazy, but it's annoying and, well, stupid as well - the banter is tired, with women* and gays** mocked, and goodness, gracious but Obi-Wan is a condescending prat in this one. Argh. Arrghhh. 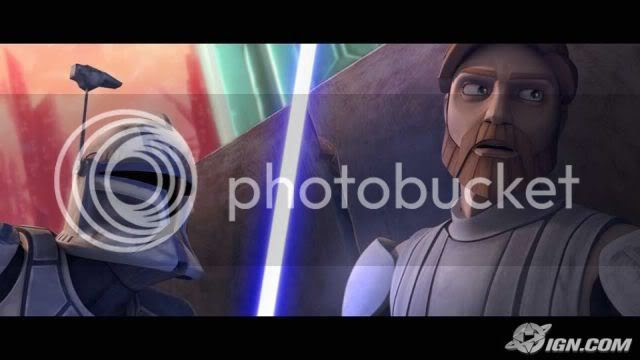 * Watch out, ladies. If you're a character in this film, you get to: be flung around in all manner of skin-tight and skimpy outfits (with visible butt cracks!), and have not only prat Obi-Wan mock you ("You'll have to do much better than that, my darling.") but the droids as well ("Yes, sir - er, ma'am - er, sir!").

** Jabba the Hutt's uncle, Ziro, is a trance club-owning queen?!

What's honestly most disappointing about this film is that it amply demonstrates how all the life, soul, fun and energy has long ago been sucked out of Star Wars. We're sorry, Mr. Lucas, but it's time to pass the torch. The way in which Star Wars has seeped into American culture is epic, and often the fan-made/non-Lucas-made products are much, much superior to the sterile, mainstream output. Just consider: a Twitter Death Star attack, irreverent comic books and the darker, more dystopian comic books, the Japanese print-style Death Star attack, Admiral "it's a TRAP!" Ackbar cereal, and heck, even just all those funny references on 30 Rock.

Anyway - the PPCC doesn't just stand for "Post-Punk Cinema Club", it also stands for "Positive and Powerful Constructive Criticism"! So how can we fix Star Wars?


How to fix Star Wars
by the PPCC

Okay. So the coolest parts in the entire Star Wars history, according to us, are:

After watching the old trilogy, with Obi-Wan's wistful nostalgia about "the clone wars" and fighting with Luke's father and da-di-da, a proto-PPCC's imagination was positively aglow. Unfortunately, all those childhood fantasies about what the clone wars must have been like - majestic! sprawling! epic! - turned into a tinny and bizarre film. And all our hopes were dashed.

But - ! There's still hope - a NEW HOPE - for the fugitive Jedi stuff. Come on, people, come oooon! This is the most fertile ground for new stories! For adventure! For pathos! For new territories! Don't ruin it, Lucas empire! 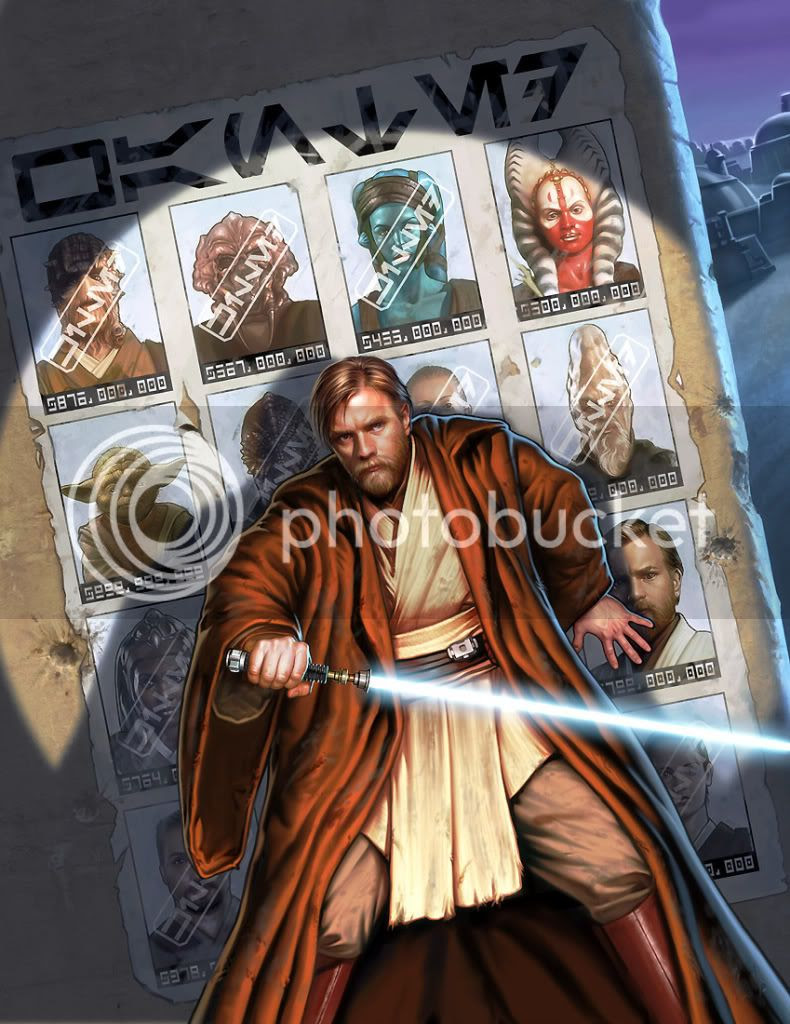 "I shot the sherrifffff, but I didn't shoot no deputeeeee."
Posted by a ppcc representative at 23:57

I was never big on Star Wars till after playing KOTOR which made me a huge Old Republic fan. Would love it if someone did a feature on the Mandalorian wars.

Kk - Some of those Old Republic comic books are awesome, too! Yay, expanded universe. It's so much cooler than canon.

Can't say I've seen any Star Wars comics in Mumbai. You're talking about the Tales of the Jedi series?

anything that have a relationship with star wars is like the Midas King touch, all become gold, video games merchandise, animated series, and other like the short film called "star wars: revelations" no matter if you're or not a fan you always be attracted by the dark side of the force.