Everyone's got buttons. And the PPCC's biggest button is the one marked "postcolonialism". Although we love all films of all types, films about migration and cultural mixing are our special favorite.

It is for this reason that we reserve a special, Om Puri-shaped space in our heart: an excellent actor known predominantly in India for his work in the Parallel Cinema with contemporary Naseeruddin Shah, or his frequent "Uncle" or villain roles in the mainstream Bollywood cinema, Om Puri also made a series of films in the UK about the British-Asian experience. My Son the Fanatic, where he plays an exasperated, flawed, humanist Pakistani taxi driver in northern England, is one of our most favorite films. Similarly, who else but Om Puri could play our favorite character (Samad the disgruntled Bangladeshi waiter) from Zadie Smith's pop postcolonial masterpiece, White Teeth? We still feel pangs of heartache that the BBC 4 TV movie still hasn't made it to DVD (apparently because it featured too much awesome music). Oh, universe! Oh, woe! 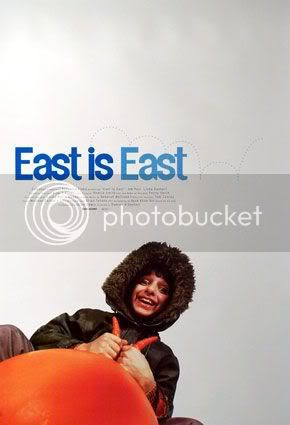 As a balm to our White Teeth-shaped wound, today we'll review for you one of the other notable Om Puri postcolonial films: East is East. Taking its title from a poem by the archetypal colonialist, Rudyard "White Man's Burden" Kipling:


OH, East is East, and West is West, and never the twain shall meet,
Till Earth and Sky stand presently at God’s great Judgment Seat;
But there is neither East nor West, Border, nor Breed, nor Birth,
When two strong men stand face to face, tho’ they come from the ends of the earth!

East is East follows the biracial Khan family, headed by Mr. George Khan (Om Puri) and Mrs. Ella Khan (Linda Bassett) and followed by their seven children. It plays upon the tensions between George's Pakistani culture, and the anxiety he experiences trying to preserve it, and the wife and children's attempts to lead more secular, Westernized lifestyles. Much of the drama centers around George's various attempts to get his sons married, though none of them - Tariq (Jimi Mistry) is a hedonistic swinger who calls himself "Tony", Saleem (Chris Bisson) is a grungy artist, Maneer (Emil Marwa) is a conservative and naive recluse, Abdul (Raji James) is the peacemaker and the exiled eldest, Nazir (Ian Aspinall), is gay - are very keen on the idea. Meanwhile, when not forcing his sons into arranged marriages or oppressing his tomboy daughter, Meenah (Archie Panjabi), into wearing a salwar kameez, George insists that his youngest son, nine-year-old Sajid (the adorable Jordan Routledge), have a belated circumcision. 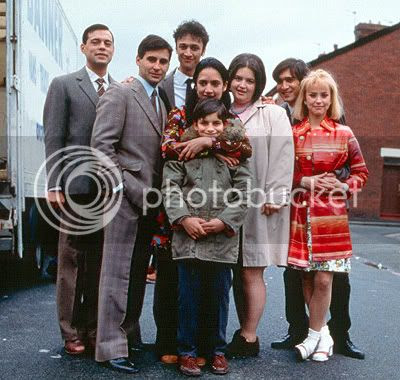 Much less subtle and pandering much more to stereotyped notions Westerners have about South Asians than other films in the genre (My Beautiful Laundrette, Mississippi Masala), this film is nonetheless pretty entertaining. It could be ostensibly interpreted as a tragicomic portrait of George Khan, a man stuck between two seemingly incompatible cultures, but George Khan is mostly a caricature and so the portrait is a cartoon. He is an immigrant struggling to preserve his culture in a radically different environment, but we don't get any idea of why he wants to preserve his culture (often at the expense of his family's happiness and even health!) or what sort of environment he came from. We get no idea of what it's like to be an immigrant, what Pakistan is like, what it's like to be George. Why does he freak out about his youngest son's circumcision? Why does he ostracize his eldest son for being gay? Why does he angst about his children ignoring Islam? "Because he's from Pakistan!" the movie seems to say.

Which is not much of an answer. Culture is important and culture is pervasive and can be brainwashing, yes, but people are people, and there is some choice in the matter, too. For someone who chose to marry an English woman (presumably in the 1950s, given the film's time period), surely he wouldn't be so single-mindedly and restrictively "Pakistani"... or would he? But if so, why? There's an interesting story to tell, culture anxiety and resistance to assimilation, which is just clumsily handled. Important things are skimmed over for the easy solution: "Because he's from Pakistan, and that's what they do in Pakistan! Isn't that funny and yet tragic?!" 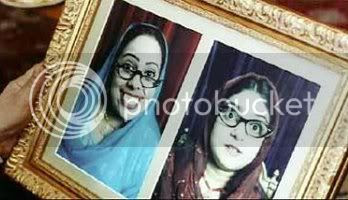 The arranged marriage brides-to-be are, of course, cartoonishly ugly. Because if they were pretty, intelligent and nice, it would be a little harder to ridicule their cultural practice, na? 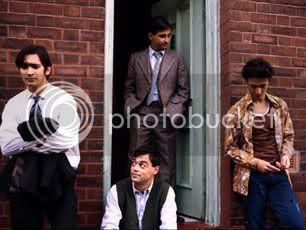 Four of the brothers.

Compare George Khan to Om Puri's similar character in the similar (but superior) film, My Son the Fanatic. In My Son the Fanatic, Om Puri is once again playing a working class Muslim South Asian immigrant in a northern English city. Yet in My Son the Fanatic, cultural tensions and racism are much more subtly expressed. For example, there's a great scene when Om Puri's character, Parvez, discovers that his increasingly fundamentalist son has just dumped his white fiancee. Parvez storms to the girl's workplace and, in desperation, invites her over for lunch and asks what went wrong. The girl, clearly upset, explains that she was dumped. Seething, Parvez declares, "I will break his face until he agrees!" This is a stunning declaration, yet it's not so easy to judge: Parvez is, in the same moment, enraged at his son's close-mindedness and threatening to use some old-fashioned, close-minded disciplining to get him to be more tolerant. Parvez's relationships with his son, his wife, his lover, his religion and alcohol are all much more interestingly presented.

My Son the Fanatic is also much more illuminating on the difficulties an immigrant might face in such a different culture - the difficulties even for well-intended assimilation. That is, notably, the characters in East is East don't face any real racism - Enoch Powell makes brief appearances as a straw man, and Salford just doesn't seem very threatening at all - instead, all of the tension is internal, self-created. We're not saying you need to categorically demonize whites (as Dhan Dhana Dhan Goal did), but racism is a hairy reality which should be acknowledged in films which purport to be about race, such as East is East.

So is East is East good? Well, it's okay. It's simplistic, it's a cartoon, and we had the distinct feeling that we, as a white viewer, were being pandered to. Om Puri is great, of course, and does what he can with the material he's given. But things aren't really as simplistic as East is East portrays. Indeed, as Om Puri himself says (in My Son the Fanatic): "They say east and west can't mix. But look - they can hardly keep apart!"

P.S. What was up with Om Puri's accent? That's not his natural accent, nor is it the already-caricatured accent he uses in My Son the Fanatic. It sounds like just another part of the "evil, ignorant George Khan" caricature: "Why you stupeh?!"

Posted by a ppcc representative at 21:23

I saw this once and i remember liking it, i remember they played music from Pakeezah and they all wanted to see Chaudvin ka chand at the cinema

I recommend "Head On" directed by Fatih Akin. It is not a happy film but a very good one that address some of the issues you are interested in.


On an unrelated note: I can't wait to read your review of Tashan.
(I loved it btw but then again I have a weakness for Akshay, especially when he is in this type of role)

This movie was the movie of kidulthood! I watched this with my mum when i was 12 and WOAH was this reflective of indian lives in England the inter-marrying and all that! Its sooo funny, raucous and soo identifiable!

Thanks for this review. I thought I was alone in feeling the way I felt about it, but I felt almost exactly the way yo do about this movie.

When I saw it at the cinema, I was the only Indian/Asian person in there. Everyone else was white. And I soon noticed something. The audience was laughing every time someone said 'Paki'. They were laughing at the characters, not with them. It really was pandering, and it was almost impossible to mention this when it was released, because it was deemed impolite for this plucky little tale. I understand that a sequel of sorts is being planned.

This pandering is a feature of much TV and cinema in the UK dealing with Asian life. In some ways, I see more hope for South Asians in American movies. There's not so much baggage there.

Nice work with the review. I remember feeling the same way when I saw the movie quite some time back. Could not understand how he could be married to a "white" lady and be so against everything western while living there. And that lady could give any of our "Bharatiya Naaris" a run for their money with her subservience..remember that too. Just weird ..and that Om Puri character was just asking for a bashing ;)

PPCC!!! This post gave me much to think about!

Ever since I saw this for the first time, I've been wondering what that word is that's been hovering on the tip of my tongue - it's "postcolonialism" of course. Thanks.

I don't think I've ever actually read a non-SouthAsian's review of this movie so this was immensely helpful coz to me, as an Indian, George was the character I understood the most. I thought all of them were terrific, but I really felt for George. Partly this is because Om Puri played him and he can never go wrong (unless he's trying to convince us he finds Rekha hot, apparently) but also because George is basically a broad stereotype into which you can fit someone you know in real life. A short hand instead of an actual fully formed character.

And until you pointed it out, I didn't even notice he was missing the detailing as a character, because my mind was filling it in all this time.

I need to think a bit more about it before I become fully coherent but yay! I found something interesting to think about!

PS - there's a BBC adaptation of White Teeth? I didn't even hear about it. No fair! I wanna see!