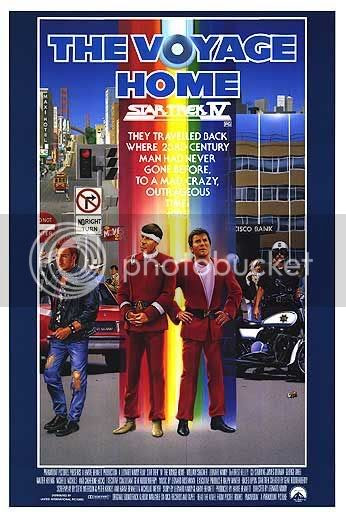 Oh my God, that was brilliant.

Buried under a stack of VHSs, apparently. But thank God, we unearthed it and can now say that there is a benchmark of demented genius. Now we know what to measure everything else against.

"Everybody remember where we parked!"

Picking up where Star Trek III: The Search for His Spockliness [sic] left off, the Enterprise's enterprising crew is chillin' on the New Mexico-like planet of Vulcan. Spock (Leonard Nimoy) is still getting up to speed on everything from quantum physics to welfare economics, thanks to his new brain being all shiny and pure and unused. Meanwhile, a large, mysterious pod is floating through space emitting a high-pitched screech which sort of sounds like, "Eeeeeooooeeeeeeoooooeeeee." No one understands what is up with this pod, and, when it approaches Earth's atmosphere, the Earth people are alarmed to see that (1) the screeching doesn't stop, (2) machines stop working, and possibly (3) the oceans are evaporating.

The Enterprise crew, being that fraction more intelligent than everyone else (as required to be the heroes of the story), mess around with the screeching until it finally sounds like, "Eeee. Oooo. Eeeeeeee." Which, duh (Spock says), that's the cry of the humpback whale. Clearly the pod is trying to speak with Earth's whales (take that, anthro-centric sci-fi!), and only a whale will be able to respond and thereby free Earth of the pod's auditory tentacles of doom.

"But humpback whales went extinct in the 21st century!" Kirk (William Shatner) says, in a subtle injection of 1980s environmentalism. "I guess we'll just have to time-travel and go get one." 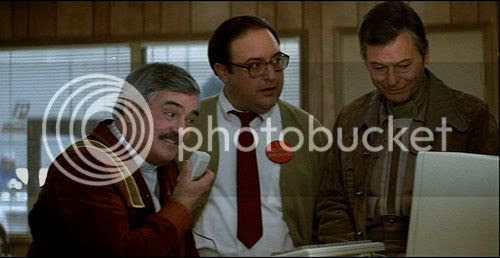 At this point, the PPCC's head was filled with exclamation marks. Was this the best film ever?!!

And it only got better! Once they warp themselves back to 1986, the Enterprise crew parks their spaceship in Golden Gate Park, San Francisco, ("Everybody remember where we parked!" Kirk tells the group) and embarks on their mission to, uh, find a whale to steal. The adventures each of them have are absolutely priceless: the aquarium, Kirk and Spock learning about "colorful metaphors" ("Double dumbass on you!" Kirk fumbles at one point), Scotty (James Doohan) managing 20th century computers, Chekov (Walter Koenig) trying to steal nuclear energy from a US Navy vessel (and even just trying to find directions to "zee nuclear wessels"), and on and on. Much of these golden comedy moments are on YouTube, but we won't spoil the punchlines for you: just do what we say and watch this film.

Kirk excuses Spock's behavior by noting that he "did a little too much LDS" in the 1960s.

And the comedy is just part of the fun! In true Trekkie style, the dynamic between all the crew members - and the visible affection they have for each other - is an absolute joy. This doesn't just extend to Kirk and Spock (though they're the top duo and in top form), but everyone gets a moment to shine and engage in character-defining ridiculousness. What's also great is that, while the vibe of this film is A Good Time in the style of 1980s iconic comedy sci-fi (e.g. Back to the Future), we can still squeeze in some interesting philosophical nuggets. Our favorite being McCoy's (DeForest Kelley) exasperated attempts to psychoanalyze and philosophize with a newly-resurrected Spock:


McCOY: Perhaps we could cover a little philosophical ground. Life... Death... Life. Things of that nature.
SPOCK: I did not have time on Vulcan to review the philosophical disciplines.
McCOY: C'mon Spock, it's me, McCoy. You really have gone where no man's gone before. Can't you tell me what it felt like?
SPOCK: It would be impossible to discuss the subject without a common frame of reference.
McCOY: You're joking!
SPOCK: A joke... is a story with a humorous climax.
McCOY: You mean I have to die to discuss your insights on death?
SPOCK: Forgive me, doctor. I am receiving a number of distress calls.
McCOY: ...I don't doubt it.

Posted by a ppcc representative at 06:17

This is one of my favourites :) Spock in his chenille dressing gown ensemble with matching headband seemed perfect in San Francisco...And I loved that the whales saved the people even though the people had failed to save the whales.

I'd watch this if it came on on late-night cable, for sho!

Did you mean that caption to say LSD? 'Cause as is, it's like he's had too much Mormonism. Which is also funny. I, for one, had way to much Presbyterianism in my youth.

Beth - No typo, that's what makes this movie GOLD.

You know, I had the entire plot of this movie narrated to me by a very long-winded cousin when I was younger, but my subsequent vague idea of what this movie was about (there's a whale? in space?) never led me to see it. I had no idea how the elements he described could POSSIBLY have worked.

But now it all becomes clear. And even more insane than I imagined.

Congratulation, to you man, Such a nice post, i really interesting, really admire your work, to have some more of it,Thanks.

I would like to thank you for sharing your thoughts and time into the stuff you post!! Thumbs up