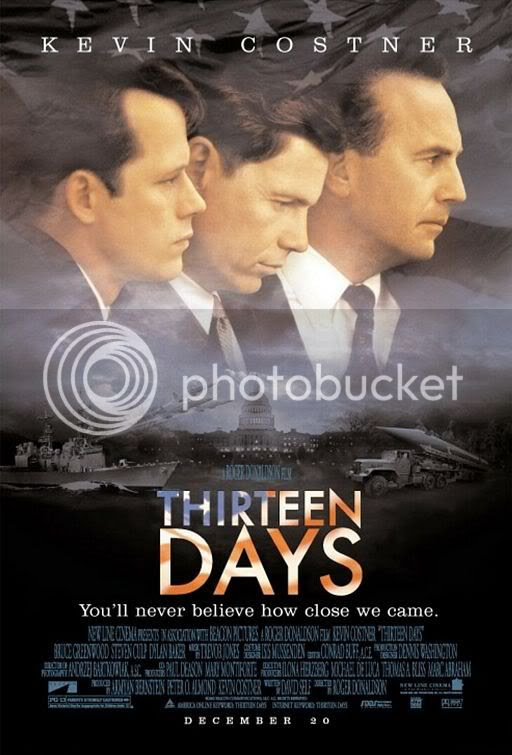 Thirteen Days (trailer) is less a "film" in the aesthetic sense of the word, and more a straightforward docudrama. Made in the earnest style of Apollo 13, except lacking that film's ace cinematography and narrative structure, Thirteen Days nonetheless sucks you in with the sheer weight of its subject: the 1962 Cuban missile crisis. We don't doubt it will become (if it hasn't already!) a staple "Movie Day" viewing in high school history classes all around America. And our bottom line is: kids, bless your lucky stars! Because this is a fun, informative, easy peasy history lesson that will make you hungry for more - more about the Kennedys, the Cold War, the bomb and, gosh, everything! (Thank God we have Oppenheimer's biography on our desk, but more on that later.)

Our protagonist is Kenneth O'Donnell (Kevin Costner), special aide to the President. The year is 1962 and the film efficiently begins with American planes detecting, for the first time, nuclear missiles being built in Cuba. We then follow all the escalating tensions, as well as the strategies and deals made within the White House during the next thirteen days, as the USA and USSR engage in a egg shell-delicate diplomatic game with potentially disastrous consequences.

First things first: this is not Good Night and Good Luck. That is, expect no artistic finesse or meaty allegory hidden in this history lesson. Furthermore: this is not Dr. Strangelove either. While nuclear holocaust looms on the horizon in all its terror, there is no existential satire. The story here is very practical, and - while ethical concerns obviously inform the whole point of what happened - the film isn't philosophical. 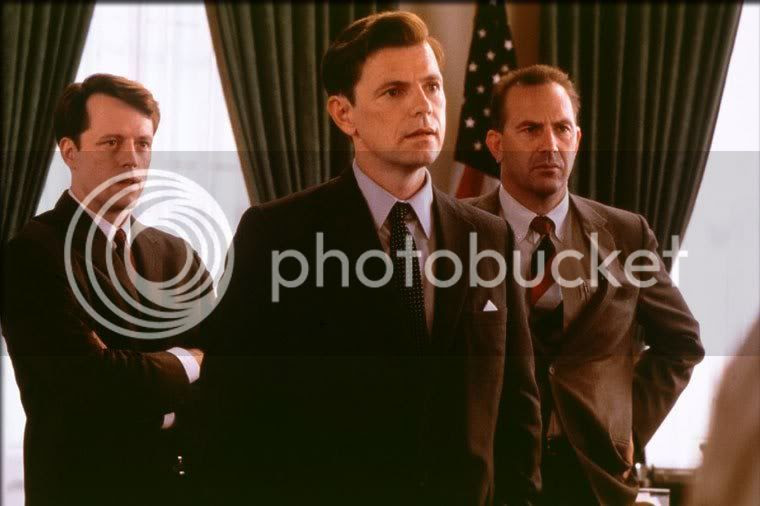 It's exactly what it says on the tin: a history lesson. And it becomes increasingly compelling with the exacting (and blunt) representation of that charged time. The actors playing President John F. Kennedy (Bruce Greenwood) and his brother, Attorney General Robert Kennedy (Steven Culp), may resemble their real-life counterparts a little too closely (giving the PPCC, for one, very strong Disney theme park vibes) and their Boston accents may feel a bit hokey ("Pahking cahs in Bahstan yahd" and all that)... initially. But, scene by scene, we at the PPCC found ourselves slowly getting hooked. The believability eventually won us over, and it was exhilarating to see the insides of Camelot in the thick of the Cold War.

Indeed, while the film isn't subtle, it does touch on some fascinating, human aspects of the story. For example, we see the cliques and insider-outsider feeling, with the "Irish mafia" triumvirate of JFK, Bobby Kennedy and Kenny O'Donnell (all Catholic, Irish and Harvard grads) - representing humanism and the "doves" - versus the more hawkish military contingent. There are several intense and private moments where, thanks to O'Donnell's "insider" status, we see JFK and Bobby Kennedy at their most vulnerable. And there's the fascinating network of 1960s Washington, where the President himself will call up a newspaper editor to ask for a story to be stalled. All in all, it makes old politics seem so innocent, idealistic and pure - and maybe it was like that in the ideal-driven 1960s? 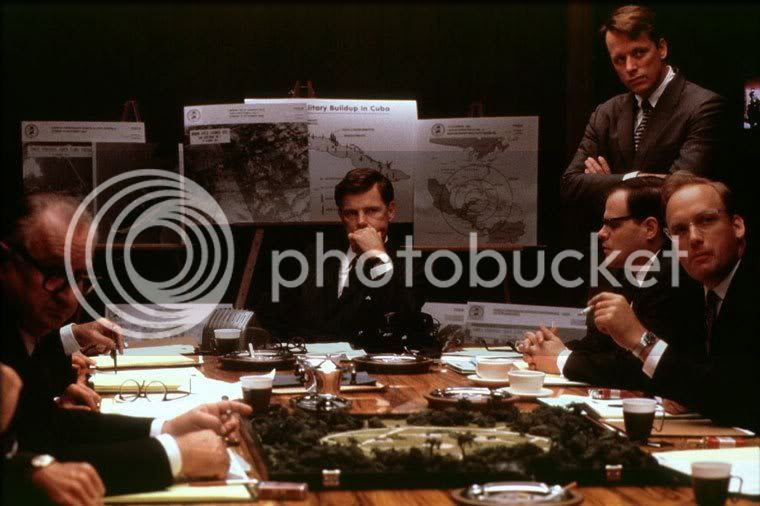 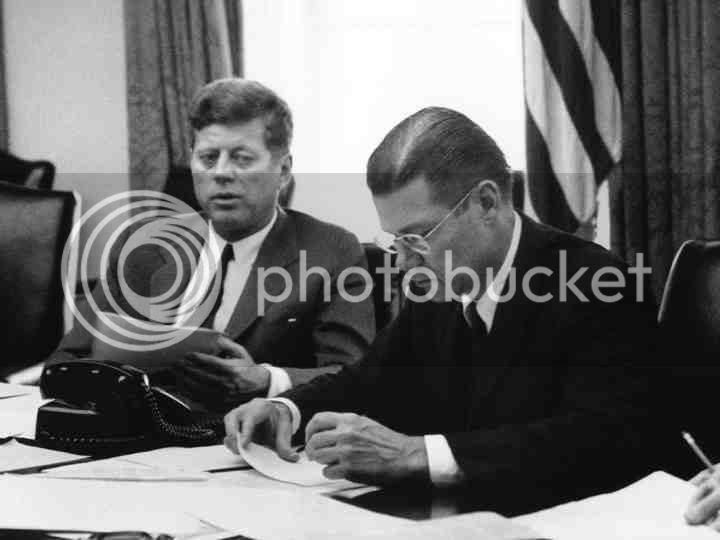 Indeed, by showing us the humanity of the men at the reins, it really brings home their courage and intelligence. And in the face of such a radically new environment - an atomic age where, as J. Robert Oppenheimer remarked, humans suddenly had "a power over nature out of all proportion to their moral strength" - often there's a feeling of flying by the seat of your pants. One of our favorite moments was when, during one of the private bull sessions between the Kennedys and O'Donnell, they realize that even the "Soviet expert", Secretary of State Dean Acheson, doesn't have the elusive solution to this potentially deadly puzzle:


PRESIDENT KENNEDY: [Secretary of State] Acheson's scenario is unacceptable, and he's got more experience than anybody.
KENNY O'DONNELL: There is no expert on the subject, there is no wise old man. There's... shit, there's just us.

Apart from the great human element, there was also the undercurrent of - wait for it - game theory! Huzzah! This sent our personal geek meter off the charts. Game theory is a branch of economics which examines strategic behavior. John Nash - whose life was made into the film A Beautiful Mind - was one of game theory's pioneers. And, during the Cold War, game theory was heavily used to predict and understand US-USSR relations - that is, what "moves" do you have to "play" in order to ensure that the world doesn't blow up. The film implicitly uses a lot of game theory vocabulary, the Kennedys frequently angsting about the "signal" they're sending to the Soviets. One choice quote comes from Secretary of Defense Robert McNamara (Dylan Baker), who, exasperated, lectures a more "old school" military man with the following:


ROBERT MCNAMARA: This is not a blockade. This is language! A new vocabulary, the likes of which the world has never seen! This is President Kennedy communicating with Secretary Khrushchev!

In terms of the filmmaking itself, as we said, it's nothing spectacular. The cinematography is actually quite clunky and bad - jerking, extreme close-ups (think 1980s masala or Wayne's World), as well as sudden screaming cuts to LOUD OBVIOUS SYMBOLS (often with different lighting; sloppy!). There's also a mysterious loss of color every so often; signifying... something? The performances are all decent. The Hahvahd triumvirate speak in fussy, over-meticulous Boston accents that often ring cheesy, but Bruce Greenwood and Steven Culp as JFK and RFK, respectively, are slightly less distracting than Kevin "I AM ALSO IN THIS FILM HELLO" Costner. Actually, special high five to foxy old Bruce Greenwood who has, in the past month, eaten alien slugs and lost several teeth for the PPCC's entertainment - and we are entertained!

Posted by a ppcc representative at 18:02

The only time I've seen this movie was in 10th grade US History class. And since it was a movie day (meaning I don't have to pay attention), the only thing I remember was the terrible accents.