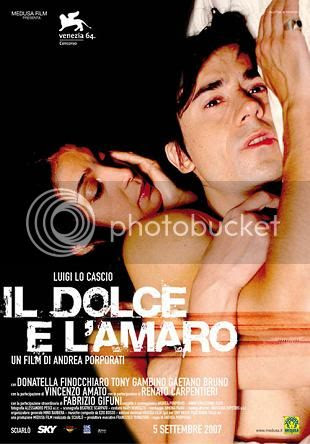 Il dolce e l'amaro (The Sweet and the Bitter) is a quick, neat little package of a film, covering a well-worn topic - the Sicilian mafia - with a light, easy touch over well-worn plot tropes - betrayal, redemption, brooding killers and sad-eyed girls next door. It's nothing particularly enlightening, but it does have a freshness of presentation - earnest acting, fun cinematography and charming music - which makes it well worth 90 minutes of your time.

If you ever went beyond the Godfather or any other American films which still glorify and glamorize the mafia, Il dolce e l'amaro will be pretty old hat. Its main theme is the exploitation of the "working" mafioso, and what it means to be in the dregs of the mob. The story follows one underling, Saro Scordia (the wonderful Sicilian actor, Luigi Lo Cascio), from his beginnings as a hired goon to his painful, desperate ascent into a "uomo d'onore" (man of honor, or, protected member of a mafia clan) to his inevitable, tumultuous fall. But expect no Scarface-style roller coaster ride over Himalayan peaks of luxury and hellish AK-47 climaxes. Il dolce e l'amaro treats its subject with a steady realism, and so Saro's spends his good days living in a comfortable, clean Palermo apartment, and his bad days wandering dead-eyed through the flat, north Italian post-industrial landscape. While there are the usual genre staples of violence, drug use and sexuality, they are relatively rare and low-key. The one up-close killing we witness is also done in a highly deglamorized way, concentrating mostly on Saro's panicking horror than any blood, guts and Hollywood badassery. 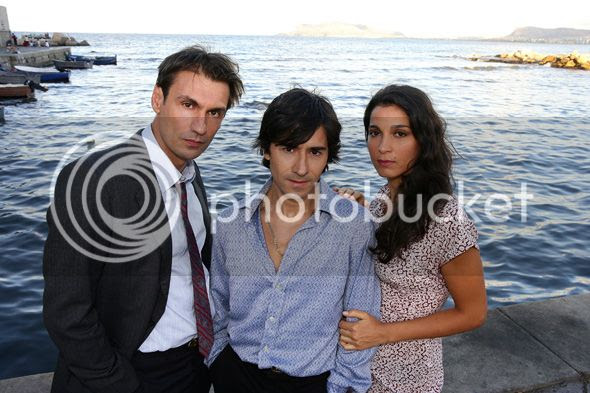 The film also has a nice, vague taste of something Giancarlo Giannini would have made in the 1980s - we're thinking, in particular, of Ternosecco or Mi Manda Picone. That is, this film could easily be grouped into that genre of gritty, slightly surreal southern Italian films which explore the two main issues of the region: poverty and organized crime. Il dolce e l'amaro features one sequence (Saro's brief dip into prison life) which hits many of the same notes and delivers the same punchline as the similar sequence in Giannini's Ternosecco. Indeed, Luigi Lo Cascio has much the same twitchy, wiry energy as Giannini, that same quality of slightly comical viciousness, and that same vibe of being low on the pecking order. Both Giannini and Lo Cascio are pretty adept at playing characters that you both pity and fear. And we at the PPCC just gosh darned love both of them. 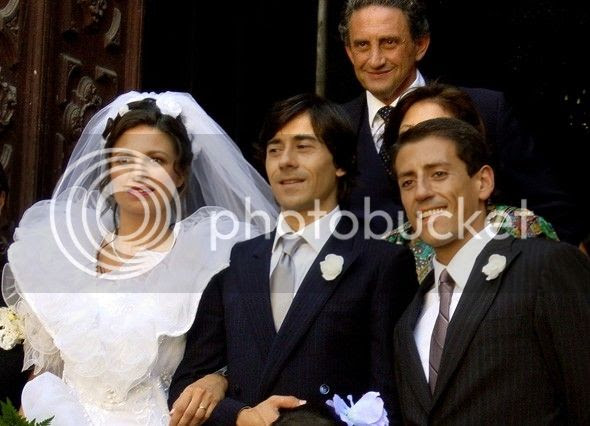 Surrounded by the mob.

In fact, this slightly-scary, slightly-pitiful viciousness is wonderfully exploited in this film's recurring use of compositions wherein Saro is put in a physically submissive position: his brief, weird one-night stand with the be-wigged lady, or the scene where his friend, the slimy don's son, Mimmo (Gaetano Bruno), pulls him on the dancefloor for a slowdance. Again and again, we are visibly shown how Saro is an underdog, kept constantly under the heel of his bosses. In a highly interesting turn, then, all the moments where Saro is physically the dominant one - for example, when he abuses his girl-next-door love, Ada (Donatella Finocchiaro), or when he kills a rival mafioso - are the moments when he is at his worst. The film clearly shows that all of Saro's attempts to get out from "underneath", to rise above his oppressors and dominate his fate, are misguided and ultimately flawed. In one poignant moment, Ada asks him (by leaning over him in a physically dominant way), "Is this the life that you wanted?", and he can only cry.

But Saro is clearly the Sicilian Everyman - and he personifies the ambitions young men may develop in a region which still suffers under the weight of poverty and lack of opportunities, where the mafia is the only "way out" from under all these heels. But the irony of trying to use the mafia to get free is probably best captured (yet more ironically, given what we said earlier in this review!) in Al Pacino's despairing lines from The Godfather: Part III: "Every time I try to get out, they pull me back in!" Well said, Al. And well played, Luigi.

Posted by a ppcc representative at 08:25