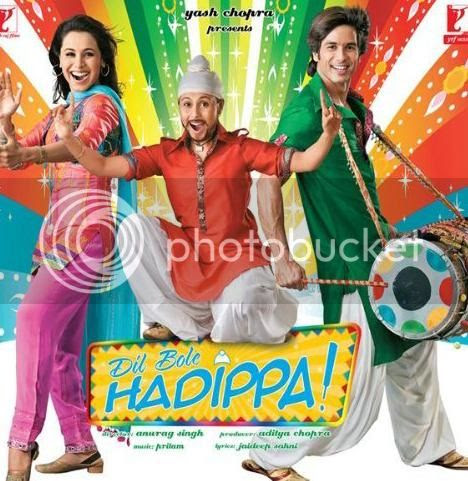 Dil Bole Hadippa! (The Heart Says Hadippa!) is your pretty standard quirky masala lite post-2000 fare - think Diet Aaja Nachle with a sprinkling of Chak De! India. It covers two increasingly popular topics in mainstream Hindi films - the sports film and the girl power film (as well as one ever-popular topic: the Punjab) - and does it using the ever-charming Rani Mukherjee in the gender-bending role of Veera Kaur and her alternate ego, Veer Pratap Singh (popular name...).

"Charming" is a good word to use for the film overall - from its bright, bubbly beginning, to its satisfyingly large bhangra dance numbers (a must, in a film so soaking in Punjabi-ness). Unfortunately, it loses considerable steam after intermission, to the point that the climactic cricket match and lover's spat feels boring and forced. Oh, just get on with it, we were thinking. Thankfully, the film's heart is in the right place: with cheerful vibes of Indian-Pakistani unity (though India, of course, must win the cricket match) and a positive girl power message. 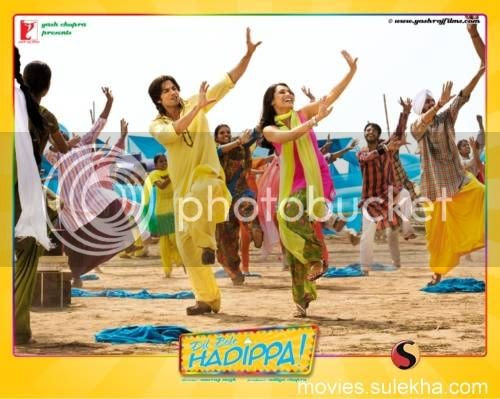 The best song, purely in terms of volume, color (man in a pink shirt, alert! yay) and bhangra-y goodness. 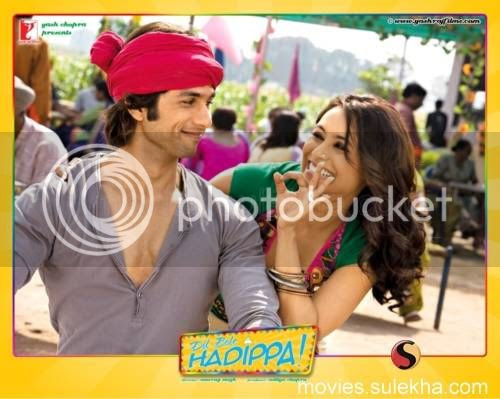 Time to bring Shahid back to his roots, man.


Optimistic and energetic Veera Kaur (Rani Mukherjee) is a self-declared "world-class batsman, right- and left-handed", and, when not helping out her local Punjabi theatre company, she busies herself with kicking ass on the pitch. One day, local cricket coach (Anupam Kher) and his best buddy from across the border (a very unexpectedly fly-looking Dilip Tahil - gosh, he's aging well!) have their annual India-Pakistan cricket match. With much sadness and woe, India loses. Twelve (?!) years on, and that same coach calls his cricket star son, Rohan (Shahid Kapoor), back from London - and, using some of that old-fashioned Hindi parent emotional arm-twisting - guilt-trips Rohan into staying on in the Punjab to help his dad's team beat Pakistan in the re-match. Veera, looking identical even after twelve years!, tries out for the team but is cast away due to the fact that she has a uterus. Whatever. Dejected, she mopes back to the theatre company... where she gets roped into cross-dressing as a jolly Sardar in the show's next big bhangra number. This, of course, gets Veera thinking, and no sooner than you can say "Sat Sri Akaal!" she's lost the eyeliner and donned a fake beard, reintroducing herself at the cricket tryouts as Veer Pratap Singh (uterus-free!). 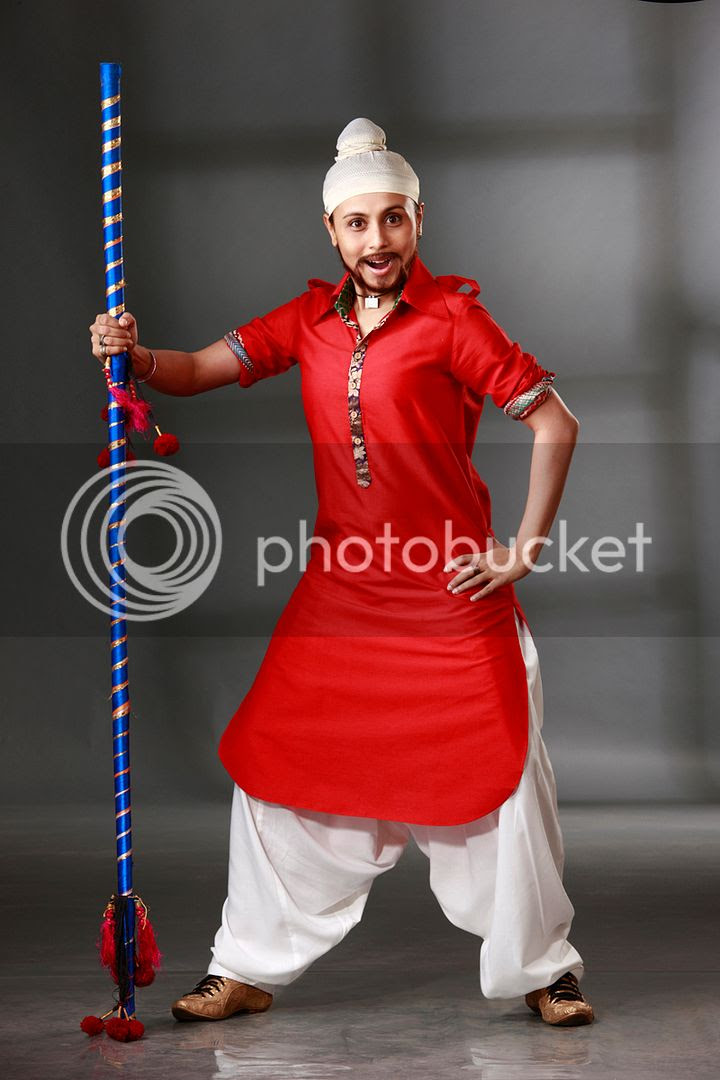 Aww, Rani is a cute man! 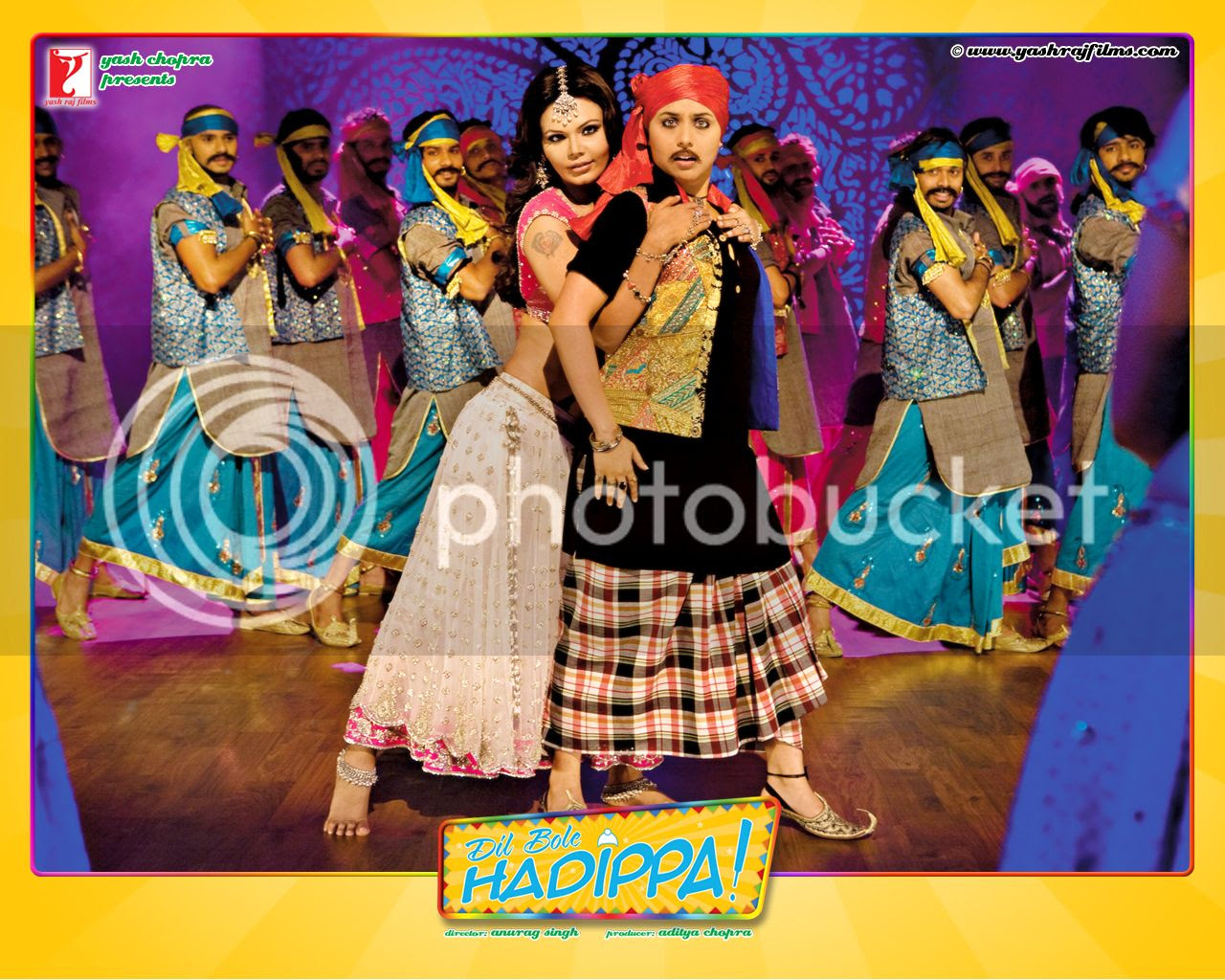 Oh my! This is the first time we've seen girl-on-girl undertones in a Hindi film since 1959!

The rest of the story goes much as you expect, with some unexpectedly racy girl-on-girl and men's locker room gags. It even goes into a slightly Twelfth Night vibe, once Rohan falls for Veera and asks "Veer" for help, but things don't get too crazy.

Everything is sparkling and clean in this film, making it an altogether pleasant experience. Nothing is particularly mind-blowing - the songs are cute, the performances acceptable, the plot pretty straightforward - but we have no real complaints either. We saw this without subtitles, and so we floated above any double entendres given our limited Hindi, but we also don't think there was any great subtlety to the script. (At least, judging by everyone else's reactions.) Rani Mukherjee was her usual lovable self - we always enjoy seeing her, and she's one of the few Hindi actresses today who has that same spark and vivacity that the Greats of Old (Nargis... Neetu... Parveen...) had. Shahid Kapoor has been impressing us this year, given this and the grimy, quirky Kaminey, and we look forward to the Era of Shahid once the aging Khans finally allow themselves to be dethroned. Anupam Kher was subdued and cried a lot - which we always appreciate. And Dilip Tahil - where do you shop, my man? Because you were looking fly as heee-eeell.

Our advice: see this in the theatres, if you can. The big songs and big fun are worth it, and we expect that it'll lose quite a bit on the small screen.

Posted by a ppcc representative at 07:38

So nice to see you posting again :-) I have been in two minds about this (and won't be able to see it in the cinema anyway)...but do like the songs and always love Rani.

But why doesn't anyone notice the BOOBS when women dress as men? And why is no effort at all made to hide them?

Memsaab - It's "meh" tending towards "cute"... worth on dekko, for sure. Hmm, perhaps people assume they're moobs. Dare I point to my beloved Anil Kapoor in Tashan? Whoa, nelly.

I really enjoyed this movie despite Anupam Kher. I think without subtitles you did miss a couple of things that you would find interesting - namely the trashing of NRI culture and the fact that Anupam Kher's father figure manipulated the situation to provide himself with everything he wanted.

Plus, did you notice the 100% lack of male homoerotic undertones? Interesting...

I put a review up over at mine discussing. :)

BLB has fingers crossed that this arrives in the theater this weekend. Last weekend we mysteriously had Wanted. Loooove Rani and would probably sit through anything for her, even NRI trashing.

YAAY to hear from you again! I discussed it over at mine, thought the NRI bashing was not too trashing and was not offended! I would sit in a dingy rubbish theatre all the way across town to watch Rani in anything!

Good to see you back and posting. Sorry but cannot generate even a modicum of enthusiasm for this one. A complete stinker through and through. The crappy script, the same old Punjabi - Yash Chopra shit, the bored hero, incompetent twit of a director - walked out of the theater an hour into the movie. And poor Rani - trying so hard - RIP Rani Mukherjee's acting career (1997-2009) ;)

rani proves to be a sullen queen again with DBH. I went to c this shit movie, after watching first day first show of wanted, and i was disgusted.

Hope yash raj sticks to its decision of not making more movies with rani soon enough.

A rip off from "She's the man", i assume girls would rather appreciate this film, I slept for over 40 minutes in the theatre.

I tend to like Yash Raj fluff, so I'll probably like it. Plus, I mean, Shahiiiiiiid! :-D

I like Shahid, I like Rani, I like big songs with lots of colour and spangles, I like painted trucks, I like this movie! I agree the story got a bit bogged down, but I quite enjoyed the resolution without speechifying, and thought that was OK. The NRI/Anglo bashing is not too bad, but it was typical of the 'Home is best' vibe common to YRF. Rakhi and Sherlyn were bizarre additions to the ensemble - Rakhi at least had some good comedy and dance opportunities, whereas Sherlyn was utilised solely as an annoying skank, so perhaps she has developed some dramatic range after all (she was *really* annoying).
I think Rani and Shahid made a very attractive pairing, and it looked as though they were having a great time in the dances - so I loved those sequences all the more. It must be so nice for 2 good dancers not to be held back by a non-dancing co star (did I hear someone mention Vidya Balan?). Rani was not at all convincing in many aspects of the Veer character, but she played it big and bold and was really engaging andthe physical comedy was fantastic. The transformative powers of contact lenses was a topic of post movie discussion!
Shahid played the bratty NRI who was fuindamentally a decent guy but had his issues to work through, and did it well. His brattiness didn't alienate me, and his conversion wasn't too sugary that I felt ill - for the material he had to work with I think he did well. He is on a roll with some good stronh scripts/movies and I hope it continues. I don't like Anupam Kher and if I was constructing my imaginary filmi family, he would not be my imaginary filmi father.
A special cheer for the movie parody/tribute sequence when Shahid took to the stage to speek to Veera - the DDLJ bit was delightful.
Yes there are people who will find the gender themes and issues too OTT to enjoy, but they didn't offend me and I didn't feel like ranting at interval, as I often do.
Overall, I found this really entertaining and will happily see it again :)
PS - I was almost successful in repressing the memory of Anil and the moobs in Tashan. Thanks for ripping the lid off my subconscious. Yeah. Big thanks.

the problem with most hindi movies is that they lose much in translation with their hollywood counterparts; this has been copied off she's the man like bhool bhulaiyaa was copied off manichitrathalam.

I liked this movie - it was fun, and thre was just enough Shahid dancing. Rani was cute - forget the moobs - it's all down to contact lenses!

Filmi Girl - India has sucked me in! Aw man, I totally missed the NRI trashing indeed. How dare they! I love NRI culture.

Beth - Mysteriously, I have been told Wanted is not as bad as it looks.

Rum - OMG me too. I would ride down a bumpy road and risk death by pothole for my beloved Rani. Arghh, she needs to make more movies!

Srinivas - Oh noez! Do not declare Rani's time over already! I still have hope. My greatest fear is that she becomes one of those "underrated classics" that in 30 years everyone misses.

Django - Good Lord, such dislike! How did you ever resist the bouncy title credits and the heeeee-YAH! bhangra? Alas, to each their own.

Ajnabi - It is VERY fluffy. And so is Shahid. Tho thweet!

J-9 - So everyone keeps saying; alas, I haven't seen She's the Man and so can't compare!

red42 - Am I an idiot for not noticing the contact lenses until AFTER Shahid did? Gosh.

Hey..I love Rani Mukerjee. She is my favourite actress and the thought of her not acting any more but Katrina Kaif having an "acting" career makes me sad :(
But Rani has painted herself into a corner with her association with Yash Raj and apparently has no more movies on hand. Very very sad.
Hope she is able to get out of this mess and make some great movies. That husky voice and smile need to be seen ;)

despite Anupam Kher Wow - I love Anupam and often watch drek just because he's in it. To PPCC, thanks for the upbeat review. I'd been very leery of seeing this but now will thanks to you. Not on the big screen of course (it's not worth a 350km drive) but eventually on DVD.

Just wanted to say that since everyone is thrashing DBH for ripping off Hollywood film 'She's the Man'; if we want to be really technical, that was actually based on good ol' Shakespeare's 'Twelfth Night'.

Anyway enjoyed the film, yeah the NRI, Viva Hindustani, Grrl Power thang was a little heavy-handed, but for this cricket tragic, was a nice chance to see some good game