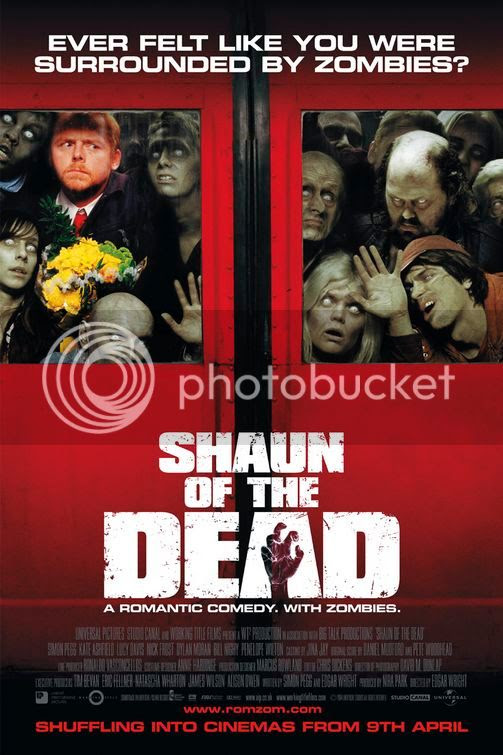 He may hide himself behind the scatological humor and bloody spectacles of ace cops and, now, zombie killers, but he is just a big softie beneath all that. Bromance and mum, video games and Star Wars, he is like the comfort food of nerd chic. And, with his Three Flavours Cornetto Trilogy, he is also probably the premier horror comedy auteur at the moment. Bruce Campbell and his huge chin have been ousted!

In Shaun of the Dead, the usual zombie siege takes place - but within the realms of middle class British normality. Inept, bumbling and frightened, dead-end (no pun intended) man-child Shaun (Simon Pegg), together with his ex, Liz (Kate Ashfield), best mate, Ed (best mate Nick Frost), beloved Mum (Penelope Wilton), and entourage in tow, must bash his way through the mindless, shuffling hordes of flesh-eating undead. When Shaun's stepdad, Philip (Bill Nighy!), is bitten, the film spares time for a genuine moment of tragedy: "Being a father," Philip says, clutching at the ravaged tendons of his neck. "It's not easy..." It also has time for buckets and buckets of gore, liberal splashes of blood, and intestines everywhere.

Always time for bromance and Cornettos for these two!

Despite all that messy carnage, the film is actually quite tidy. Details established early are periodically tied up, interesting ideas (such that modern life, consumerism and TV have made the living dead out of us all anyway) are thrown out there but not pursued too much, and the script - especially when Shaun and Ed channel surf - is snappy and fresh. There are no huge surprises, though there are some unfortunate (even horrific, though such is the nature of these things) occurrences.

What's more impressive than the glistening organs lying strewn about the increasingly chaotic English suburban streets is the real, sticky heart beneath the Romero-esque razzle dazzle. This is Pegg's baby (he wrote and stars) and he gives it his all: his swings from self-conscious irony (killing his first zombie) to weeping despair (the death of his stepdad) to tears-drying-open-mouthed horror (the resurrection of his stepdad) feel genuine. We gagged and laughed for most of the film but - in some of the later moments, when even the pub sanctuary is besieged and all feels lost - we cried some real, authentic tears of our own. Oh, woe! And we had to remind ourselves that, at least out there at the final frontier, there is a Simon Pegg that is happy and hasn't got any red on him.

Posted by a ppcc representative at 21:03

I think this is pretty close to being a perfect movie.

one hell of a film