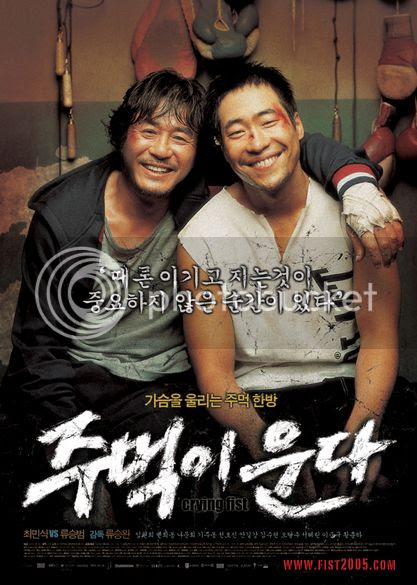 By the end of Jumeogi unda (Crying Fist), we were so tired of seeing Choi Min-Sik lying drunkenly on the pavement covered in his own vomit that we almost gave the laptop screen a double jab.

A two-hour boxing-as-life metaphor, Crying Fist's plot is two-sided. In one corner, we follow Kang Tae-shik (Choi Min-Sik), an aging ex-champion, penniless and hard drinking, who makes change for scraps by offering himself as a human punching bag to stressed out Seoul pedestrians. With a terrible temper, onsetting medical problems and seemingly complete disconnect from modern life, Tae-shik embarrasses his young son (a very adorable Lee Gun-ju), exasperates his wife (Seo Hye-rin) and tests his friends' patience. With creditors hounding him, he seems to be at a soon-to-be-literal dead end... until he learns of a new boxing tournament, which might be just the thing to raise him from the gutter (or knock him out one final time).

In the other corner, we follow the young Yu Sang-hwan (Ryu Seung-beom). Overflowing with energy and frustration, Sang-hwan is a tightly-wound ball of nerves and anger. After being thrown into juvenile detention for petty thievery, he chews off another inmate's ear (nutritious!) and is hence condemned to boxing practice (FOREVER). Here, Sang-hwan finds the perfect outlet for his bad-ass ways, and his sudden passion for the sport impresses everyone. When his father (Gi Ju-bong) is then killed in a freak accident, it's up to Sang-hwan to be the man of the house. And his only exit from a life of poverty and crime is boxing. The upcoming tournament seems like just the ticket he needs.

Thanks to this set-up, the audience is set up for emotional torture during the tournament itelf, as the film has taken great pains to familiarize us with both competitors. It's an impossible match, as both characters are equally needful and equally sympathetic. And indeed, the finale is a bit of a cop-out - an overly facile conclusion to an otherwise nervy, tough film.

You can take the boxer out of the ring.

But not the ring out of the boxer.

Choi Min-Sik has a strong dash of the demented in him (something he shares with Gary Oldman, yay!) - and he's exhibited a great, Dionysian wretchedness in previous films like Chihwaseon and Oldboy. In Crying Fist, this same wretchedness tires - if only because it feels so one-note. There's never a moment when Tae-shik is not a pitiful, brutish "coulda-been-a-contender" has-been; we get no sense of hidden dimensions. Ryu Seung-beom is better as the younger Sang-hwan; his swings from howling rage to steely determination, as well as his maturation into a solid young man, are great (a story is supposed to be about a character undergoing change, after all!).

The filmmaking has a canned, overly saturated look, which is quite pretty and made us a bit inexplicably hungry (bi bim bap anyone? oh Lord, so hungry!). Themes of how using violence as an expression of anger or national pride is quickly becoming outdated in metrosexual Seoul were interesting - but not as interesting as the evil corporate American monster that crawls out of the river in The Host. Decent, but there are better films featuring boxing, anti-metrosexualization or Choi Min-sik.

Posted by a ppcc representative at 00:16