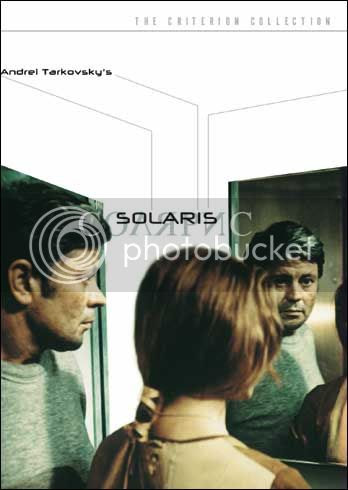 Like the Bach piece that drifts throughout its titular space station, Solyaris is an austere and beautiful film. Long and slow, we never expected such intensity of feeling, and such narrative clarity, in something so quiet and so thinkerly. An adaptation of the similarly thoughtful novel of the same name by Stanislaw Lem

, it manages to capture both the philosophical undertones of man's modest place in the universe, as well as portraying with great sensitivity humanity's microcosmic curse of life, death and love. Like a lot of other Russian stuff (Chekhov, Burnt by the Sun, Shostakovich), this film is greatly in tune with the exquisiteness of suffering, the romance and mysterious beauty of being alive.

Noose = loving our children? (Incidentally, this cap taken from a hypnotic, extended ride over Tokyo's flyovers and tunnels. Very Futurism with a capital F.)

In a nondescript future, psychologist and Solaristics researcher, Kris Kelvin (Donatas Banionis), is preparing for his departure to the Solaris space station. This station orbits around the mysterious Solaris planet - a planet which has befuddled scientists for generations and riddled Solaristics with a crappy reputation. No one quite understands the planet; neither its enormous, foggy ocean which seems strangely conscious, nor the fact that everyone who visits the space station becomes a near-suicidal hermit. Kelvin's job is to visit the station, meet the remaining three scientists who live there, and assess whether the entire project should be shut down. Before his departure, he is intercepted by a former pilot, Burton (Vladislav Dvorzhetsky), with tales of strange pseudo-hallucinations coming from the planet-wide oceans: plastic gardens, giant babies, the like. Burton begs the skeptical Kelvin to keep the research alive. Kelvin just thinks he's sad and crazy.

Coming in to land.

When Kelvin arrives at the station, he finds it ill-maintained and eerily empty. One of the three remaining scientists, Dr. Gibarian (Sos Sargsyan), has killed himself and left Kelvin a cryptic video begging him to understand that he did it for the best. The other two scientists, Snaut (Jüri Järvet) and Sartorius (Anatoli Solonitsyn), are likewise disheveled, frazzled and evasive. They get very uncomfortable when Kelvin attempts to enter their quarters, and, just as Snaut is reminding Kelvin to remember that there are only three people on the ship now (you hear me? three! three!), something unseen rustles in Snaut's hammock and a child's ear is glimpsed. And whatever you do, Snaut warns Kelvin, keep your head about you!

Properly shaken, it's not long before Kelvin starts seeing his own apparitions - tinkling bells, a girl's leg - until one day everything solidifies into the form of his deceased wife, Hari (Natalya Bondarchuk), sitting bewildered on his couch.

Helping your dead wife out of the dress that she died in? Maybe number 1 on the horrifying scale.

High-quality horror doesn't rely on surprising you or dressing things up in creeping shadows, and, indeed, everything in Solaris is simply and plainly presented. Yet the terrible mystery of these living ghosts, who persistently reappear in the bedroom even after Kelvin shoots Hari into orbit, is truly awful. You spend much of the film like Kelvin: sweating like mad, too terrified to say anything. It is harrying and harrowing, and it's also darkly comic when the three scientists - Kelvin, Snaut, Sartorius - meet up to lament and try to understand their own private hells. Why? How? and WTF? seem to be the major questions. It's clear that the giant planet-ocean is physically manifesting their thoughts, but why? The purpose, while not apparently sinister, is nonetheless frightening just for being so incomprehensible. It is here that the film makes many a powerful comment on the inappropriateness and laughably arrogant ignorance of man's desire to see and understand the cosmos. Understand the cosmos? We can just hear the murky water laughing at you. *bells tinkle*

Unexpectedly (and in a departure from Lem's cerebral novel), a new feeling then creeps into the film, and it becomes an intensely intimate and expressive love story between the guilt-ridden Kelvin and the increasingly self-aware Hari. Tormented astronaut revisited by dead love interest seems a bit hokey and maudlin - if dead wives are going to come back to astronauts, we think the eyeless hellraiser type is much more fun - but it's handled with a beautiful, brooding passion. The credit for this goes as much to director Andrei Tarkovsky as to the actors Donatas Banionis and Natalya Bondarchuk. Banionis seems like the love child between Oliver Reed's intensity and Stellan Skarsgard's slouching sexiness, his look of perpetual torment is perfect for this role - if ever someone looked world-weary on an interstellar scale...! Natalya Bondarchuk likewise has a poignant innocence, and the initially vacant creepiness gives way, after self-awareness, to a sad sort of dignity. Kelvin may be the nominal hero, but Hari is the heroic one.

This was an intelligent, often gut-wrenching film. Give yourself a quiet evening at home to watch it, as the pace is unhurried and its full force is best felt when you're matching its leisurely wavelengths. Subtle, powerful, gorgeous. Highly recommended.

Posted by a ppcc representative at 11:24