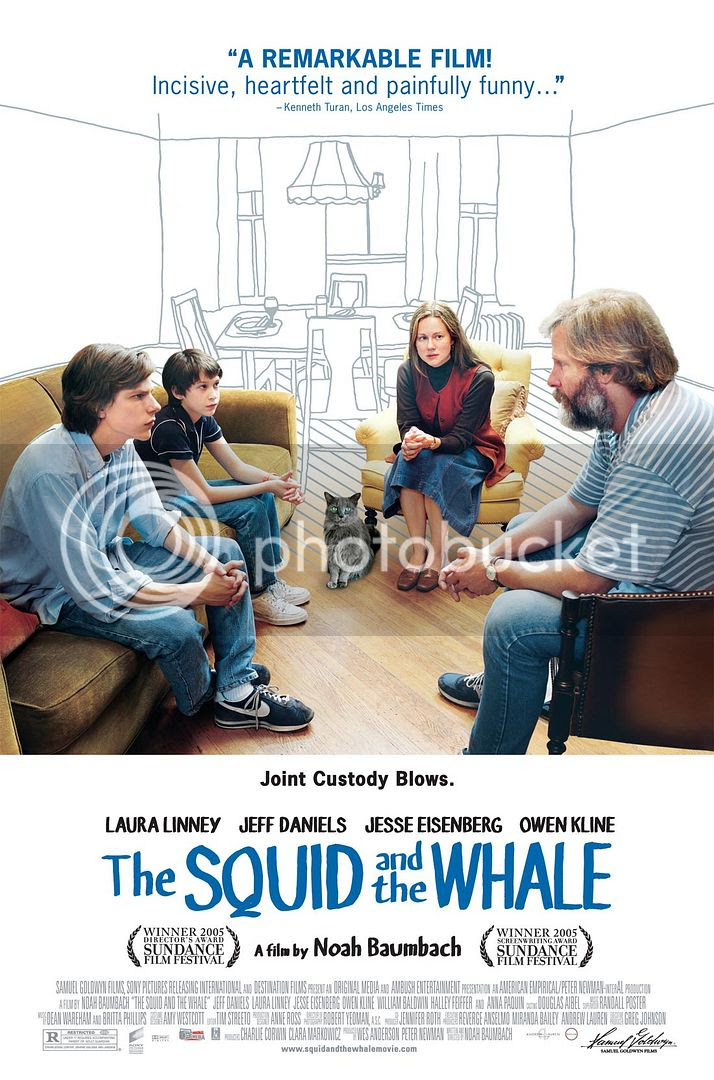 "Happy families are all alike; every unhappy family is unhappy in its own way."
-Leo Tolstoy

The Squid and the Whale is a tragedy dressed up as a comedy. You spend much of the film laughing at this fractured family and their members' numerous personal disasters, but, in the end, that feeling of bittersweet humanity weighs. It's a gorgeous, pitch perfect film, and one of our favorites from 2005 - a year of many favorites!

Set in 1980s Brooklyn, we follow the fraying Berkmans: pater familias is Bernard (Jeff Daniels on a tour de force), an overbearing, self-aggrandizing snob and former novelist star. His wife is Joan (Laura Linney), ever-patient but reaching the end of her tether and realizing her own writerly talents, her own freedoms. They have two sons: the older Walt (Jesse Eisenberg), insecure and turning into a walking mimic of Bernard, and younger Frank (Owen Kline, son of Kevin), a sensitive turtle- and tennis-lover. Early in the film, the parents announce: they're getting a divorce. Joint custody. Frank dissolves into tears. Walt mimics the adults and calmly asks who will take care of the cat. 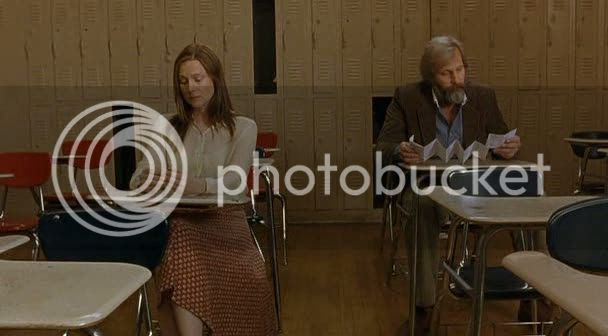 The squid and the whale.

The film's tone is one of gently mocking humor, a sort of infinitely sensitive satire. While Bernard could easily fall into the trap of being the film's villain, he is just as wounded as the others. There is no malice, so much as bumbling, desperate attempts to maintain an uneasy peace amidst all these hurting people. Walt passes off a Pink Floyd song as his own, and acts arrogantly towards his well-meaning girlfriend (Halley Feiffer). In one of the film's simultaneously most horrifying, funny and sad sequences, younger brother Frank discovers alcohol and his sexuality. Bernard takes in one of his writing students, Lili (Anna Paquin), as a boarder - to disastrous effect. 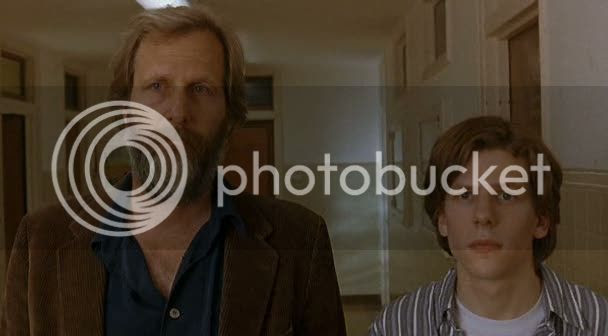 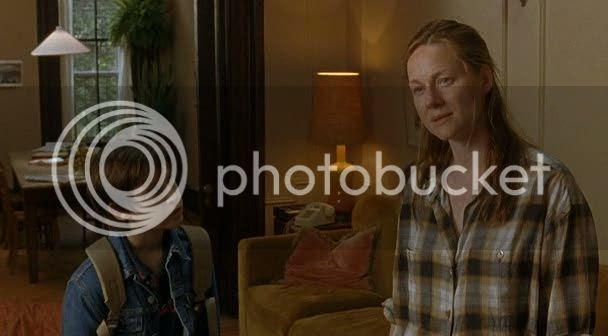 The script is intelligent, with subtle revelations and much between the lines. The sparring between these family members feels very real, with old wounds resurfacing in fresh attacks, with battle lines drawn along the film's opening tennis match (Mom and Frank vs. Dad and Walt). The final revelation - that we have to accept our scary, imperfect parents, the squids and the whales who beget us - is forgiving and true.

While Billy Baldwin as Ivan, Frank's tennis coach, threatens to turn into a caricature, and Anna Paquin acts as little more than a vamp, the nuclear family is as real as ever. This is a biographical film, and writer/director Noah Baumbach treats his (highly personal) subject with delicacy, intelligence and a fair degree of objectivity. Everyone is imperfect (we even wondered which brother Noah was, as both are pretty damning), but they also have moments of grace. The performances, particularly Jeff Daniels (who would then be imitated, to much lesser effect, by Dennis Quaid in the comparatively pale knock-off Smart People) and Owen Kline, are amazing. Overall, one of our favorite films. Highly recommended!

Posted by a ppcc representative at 08:09