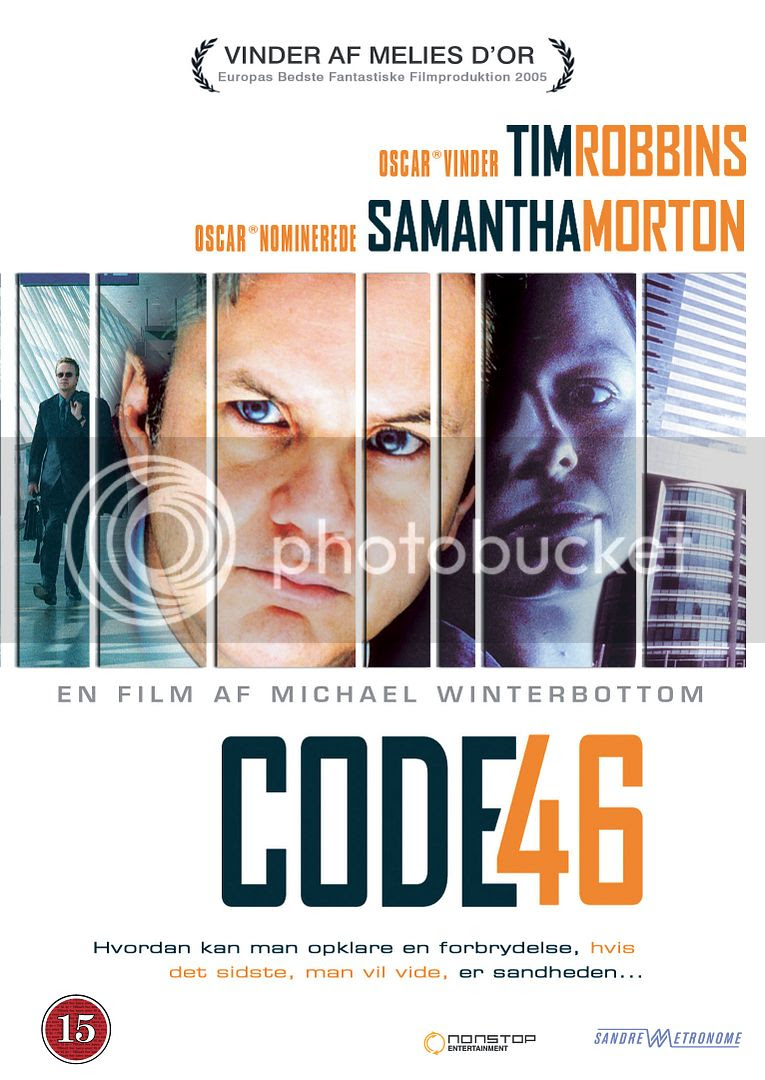 Code 46, the troubling, moody dystopian romance, initially charmed us, then baffled us, then kinda freaked us out, and then surprised us (Coldplay? Really?). But we are so terribly partial to dystopias filmed in atmospheric indie fuzz that we could overlook even the uncomfortable Oedipal kinks and the too-mainstream pop bookend: we liked it.

Kind of like the (incestuous!) love child between Blade Runner and Eternal Sunshine of the Spotless Mind, Code 46 is about love in the time of being almost-post-human. The film pushes special PPCC buttons by also being post-colonial: it acknowledges the Rest of the World, and what its position would be in a freaky future. But best of all: it's just a sweet, heady, doomed romance full of brooding darkness and two very weird people.

Living in an Escher world (where are Godel and Bach

William (Tim Robbins, who is apparently a giant) is - like all good dystopian anti-heroes - a bureaucratic drone. This drone's particular job is investigating "papelles" fraud. The world has been divided into the Inside - buzzing metropolises full of light, drugs and technology - and the Outside - underdeveloped, poverty-stricken deserts. Movement across this so-familiar-it's-alien world is heavily controlled, and you need "papelles" to get anywhere. Interestingly, the axis of geopolitical influence has shifted from the Atlantic to the Indian Ocean - most characters circle around India, the Middle East and China.

You're so cute and great, Om Puri!

William has now been sent to Shanghai (looking remarkably like Hong Kong) to investigate a possible fraud at the large Sphinx company. While the anxious manager (Om Puri!!!) is eager to keep things quiet, William - tripping, William Gibson

-style, on an "empathy virus" that spikes his intuition - easily identifies the culprit using only one, quick meeting with all the employees. That culprit, unfortunately, is the sexy, alluring Maria Gonzalez (Samantha Morton, still in Minority Report buzzcut mode). Maria is so totally awesome that William has some other, less attractive person arrested (whose only line announces that he was born in Hyderabad!), then follows her into a karaoke club where Mick Jones sings Clash songs. And so begins their very inappropriate, kinda gross but also fascinating romance.

It's been a long time since we've seen a believable future presented, but Code 46 was the most evocative, grimy and convincing future since Gateway

. Everyone speaks a babel of world languages - their chatter is peppered with Spanish, Italian, Urdu, Arabic and Mandarin. Familiar cities - Hong Kong, Shanghai, Seattle, Delhi (?) - are filmed in ways which render them otherworldly. The whole territory is strange, yet its links to our present are easily traceable. The whole film's look is very mysterious and beautiful.

Big Brother is watching you. As usual.

This sort of story also encourages us to THINK in capital letters, and it does raise some interesting questions about gene pools, designer babies and the "Third World". But we were much more refreshed by the interpretation of this as an updated Greek tragedy, full of yearning and elliptical consciousness and DOOM in capital letters (also). It is forbidden love at its most primal, and the modern spin to the tragedy is that it was technological drive which set William and Maria up for their Sophocles-and-Aeschylus-style fall. Are all dystopias cautionary fables with a Luddite bent? Maybe. But only some of them are as classy (and classical) as this one, and even fewer let the softest of human emotions take center stage.
Posted by a ppcc representative at 04:56

This was such a great movie! I have my own spoiler-filled theory about their attraction & Maria's dream (so visitors, don't read on if you don't want to know!):


1. First thing I wondered about was the link between William's biological mom, and how strange it was that her clone kept dreaming about meeting her own genetic son.

I remembered this thing on Nova once about epigenetics, and it explained that our environment & experiences can alter the way our genes are expressed. Soooo, what if William's biological mother truly regretted giving him up, and had a deep desire to reconnect with her son again in the future? And what if that experience of losing her son (and wanting to find him again) found some expression in her genes prior to her DNA being cloned? If that were the case, it could be the basis for Maria's dreams. For all we know, the other 23 clones in her set were also experiencing similar dreams about trying to find some significant stranger.

William's attraction to her is simple, as RL studies show that we are often attracted to those who are similar to our parents or ourselves.

That pretty much summed it up for me on the scientific end of things, but then I realized that it's only half the story. There's this whole weird, mystical side to it as well. Namely:

In the future, even one that had to resort to cloning, presumably because the population was decimated by some natural disasters caused by global warming (or whatever the heck it was all about) -- even in that future, there were still millions & millions, if not billions of people living and working all over the globe. What are the odds that William would bump into any one of his mother's 24 clones (1 out of 24 out of millions/billions)? Take that, and factor in the odds that he bumps into one of her clones *on her birthday*, when she's been having this recurring dream about meeting him -precisely on her birthday- *for several years prior*. Take that and factor in the odds that the dream takes place on a train, and how this first real face-to-face talk also takes place on a train. It's just not normal o_O

So yeah, even though it's easy enough to explain away their physical attraction to each other in terms of Freudian/genetic impulses, it really ventures into the esoteric when you put those impulses into the context of their unlikely, practically prophecied meeting in the first place.

I think the saddest line in the whole film is when the attendant at the DNA clinic tells William "we are not prisoners of our genetic code". She is trying to be helpful by affirming that Maria's psyche - the essence of who she is - is just as unique as any non-clone. But this positive affirmation of Maria's humanness only highlights the opposite -- that she certainly *is* a prisoner of her genetic code -- because Maria is not William's mother any more than the next random woman, but she can never be with him, because of her DNA.

It's the most tragic thing ever! =(

Last but not least

3. I think it's possible that he could know her/meet her again at some point, based on a couple of things peppered throughout the movie:

A.) Notice that most of the time when Maria narrates, she's addressing William directly, as though she was talking directly to him, or writing him a letter. I didn't pick up on that until the third viewing, but I thought it was significant (e.g. her last words "I miss you" vs. 'I miss him', etc.).

B.) The distinct look & sound[track] when viewing Maria's memory book. There is one scene that shows Maria in the exact same fashion from William's pov - it's when he ties her up in Jebel Ali on their last night together. Maybe we're meant to assume that this memory was particularly vivid for him. Obviously, it was erased by the scanner at the end, but Maria says something interesting in her narration "Can you miss someone you don't remember? Can one moment or experience ever disappear completely? Or does it always exist somewhere, waiting to be discovered". Her train ride triggered the dream-memory of him. Maybe if he got a letter from Maria, telling him the story of how they met, it would jog his memory.

But how could it jog his memory if he has no memory of her? well,

C.) A meme may still exist. It really depends on how those brain scanners work, but at the end, when his wife asks the doctor "How much does he remember?" The Doctor tells him "He knows he went to Shanghai [and] he solved a case...". Now, in order to remember solving a case, he must be able to recall talking to the suspects. Obviously, his interaction with Maria would've been erased, but what about the Indian guy he talked to right before her?

In that scene, William asks all of the suspects "Tell me something about yourself?" and they all say something about themselves, except that one guy - he answers the question like this: "There's a girl here. Maria. She's tone deaf. She can't hold a tune to save her life. That's beautiful, don't you think?"

Again, it depends on how those scanner's work, but since the comment from her co-worker's interrogation wasn't a memory *of her* per se, it's possible that the scanners didn't erase it. Take all those pieces & what do you have?

C.) A meme left behind (that works like a prompt), so that if

A.) he ever got a letter from someone named Maria, telling him that she couldn't hold a tune to save her life, that she met him in Shanghai during an investigation, etc. -- well, he might recall the interrogation w/that one dude, and it might at least give him cause to believe her story (and at the most - total recall, or maybe

B.)just the bed scene from Jebel-Ali, as per the cinematic visual/audio cues of the memory book).

As you can see, this movie really does make you think (maybe too much lol), but that's why I liked it. Intriguing characters, great storytelling, and very atmospheric, realistic vision of a dystopian near-future.