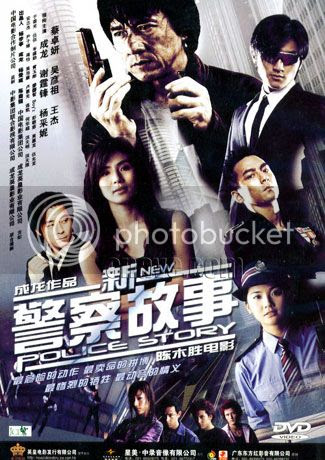 Now that Jackie Chan's getting older, he's going for the darker, more serious characters. We remember seeing - with shock! - the grizzled, unhappy Jackie of The Shinjuku Incident in those grim trailers. Could our favorite kung fu muppet - he of the bubbly hopping around, bumbling martial arts, he the happy drunk - pull off serious?

2010's The Karate Kid is one example, and 2004's Xin jing cha gu shi (New Police Story) is another. Both are pretty good, if not the usual roundhouse double-jab madness and the reason we like Jackie Chan in the first place.

Appropriate color, since Jackie will be in some serious mourning for most of this film.

But what movie does THIS guy think he's in?!

New Police Story - a continuation of the highly popular 1980s Police Story films - finds Senior Inspector Chan Kwok-Wing (Jackie Chan) drowning his very evident sorrows into shot after shot of liquor. After collapsing into his own vomit in a nearby alley, we're treated to an extended explanatory flashback: Back in the day, Chan was an upright and noble police officer, everyone's buddy, a leader, and about to get engaged with the pretty Ho-Yee (Charlie Yeung). But then all his plans were ruined at the hands of a gang of infantile, animal mask-wearing video game sadists, who - driven by their passionate cop-hate - killed every single member of Chan's team, slowly and painfully (and often embarrassingly), in an elaborate Doom-style reality RPG thing.

Since then, Chan has been unable to forgive himself. Alienated from the force and his ladyfriend, he nows spends his nights boozing and his days recovering... for more boozing. Until, of course, a bouncy muppet named Frank (Nicholas Tse) pops into his life.

Of all the gin joints!

Okay, maybe a little too much gin.

Frank makes Kermit the Frog look somber and morose, and his complete inability to JUST CALM DOWN initially irritates, well, everyone. Frank hero-worships Chan and is all about fixing his life, both romantic and professional. And, well, emotional. And because Hyper Kermit and the gamers are cut from the same cloth - the one kept aside for MAN-CHILD - it all works out in the end.

The problem with this movie is twofold. Fold one is: everyone seems to have radically different ideas about the type of film they're making, and for this reason, we have to endure a wild ride of mismatched tones. Is it an Infernal Affairs-type cop tragedy? Or is it a Saturday morning action cartoon? Jackie seems to think the former, while the actors playing the villains, the girlfriend and the buddy, think the latter. As does the director, really, what with his whiplash-inducing swoosh cuts and so on. It's hard to get a grip on this, hard to build up an emotional investment - since the emotional core of the movie, Jackie's grief over all his buddies, doesn't really work. The villains are just too ridiculous.

Guns?! What about some furious fists?!

Argh, are you gonna let him talk to you like that?

Fold two of the problem is that the kung fu is very toned down. It's not Shanghai Noon-toned down, where it's hardly recognizable as martial arts at all, but the fights are slower and shorter than, say, the visual extravaganzas of Drunken Master 2. Jackie Chan has incredible talent when it comes to physical expression, and he usually uses this for clownish, exciting stunts. Get his character drunk and voila! Fun! New Police Story's fight scenes are, ironically, much more sober and, well, boring. Apart from a chaotic romp on a careening, out-of-control bus (reminiscent of the bit in Blues Brothers), or a very long plug for Lego (okay, we love Lego too), there's not much to feast the kung fu lover's eyes on. Alas.

Posted by a ppcc representative at 02:35

Hi,I came across a Movie Review Contest on http://movies.desimartini.com and found it very interesting. Its a great platform for Movie Reviewers.

This is not really a good film - one I only watched because I really like Nicholas Tse (he is a great actor and a hottie) and apart from the problems you have mentioned I would like to point out at the elephant in the room. Jackie Chan was TOO OLD for this part.

I love JC by the way and think him a great martial arts actor - only this type of acting comes with a shorter shelf life (due to nature) and his came long before he -finally - accepted this fact.