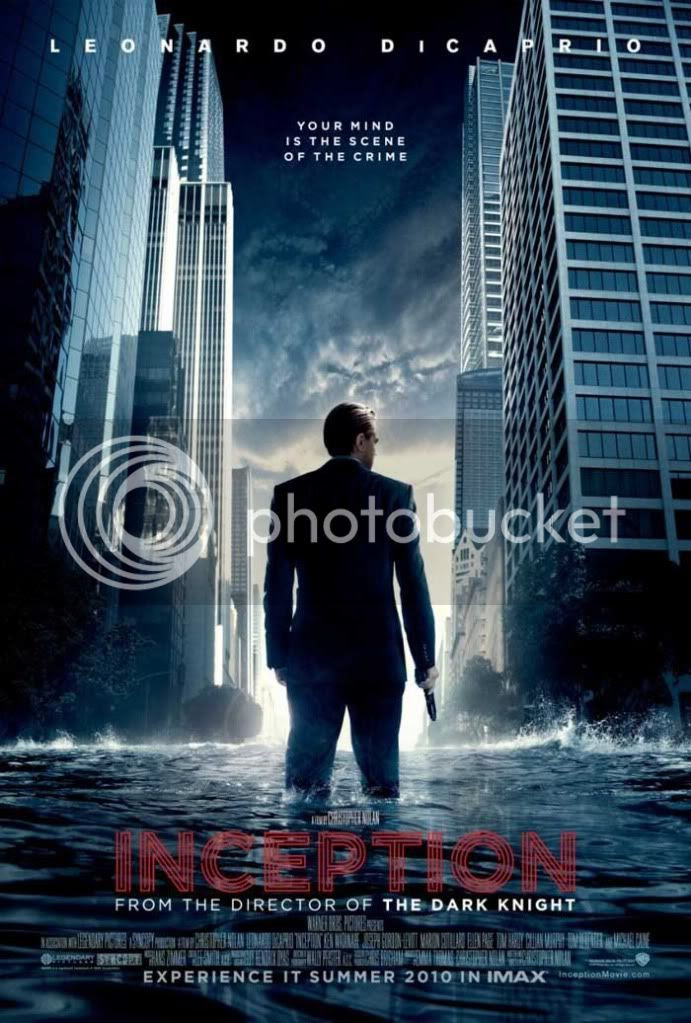 The most hackneyed of conclusions, unless of course you build an entire story around it.

If Philip K. Dick, Freud, Escher and Solyaris had a baby, it would be Christopher Nolan's Inception. And a visually arresting baby it is! There were moments during Inception when our breath caught in our throat. We felt the rest of the (packed) moviehouse gaping with us, and we felt the collective gasps and exhalations when director Nolan allowed us a moment's breathing space within his universe of operatic awesomeness.

Filmed with the same dark, urban grandeur of Dark Knight, Inception follows a team of dream predators. Led by the haunted Cobb (Leonardo DiCaprio), they do corporate espionage via shared dreamscapes. (Almost) anything is possible in this surreal space where the subconscious manifests itself as a seething, threatening crowd (how Andrew Lloyd Webber!), or warping, shifting city blocks. When one corporate giant, Saito (Ken Watanabe), makes Cobb an offer he can't refuse - a chance to return to America, his record unsullied by mysterious charges which we learn more about later - Cobb leaps. He gathers his finest team - and a fine bunch they are (Joseph Gordon-Levitt, Ellen Page, Dileep Rao, Tom Hardy) - and devises an elaborated, layered scheme to get one industrial scion (Cillian Murphy) to willingly break up his dying father's (Pete Posthelwaite) empire.

That, basically, is inception: to plant an idea in someone's head and let it grow. What the film goes to great (and gorgeous) pains to show is how some ideas, fertilized by the unwieldy ids at our core, can ferment into wild destruction. We can't control what we create in the mindspace. Cobb's wife (Marion Cotillard) knew that all too well, and Cobb is still trying to make amends for it. And the hypnotic, unexpected twists of Inception's dreams provide further evidence: trains charge unexpectedly through downtown streets, characters change their appearances, the center of gravity swings wildly. Subjective reality is insane. Quotes by Frank Herbert become appropriate: "The sleeper must awaken." (How Buddhist!)

In the end, it's all about solipsism and - because of that, as well as Hans Zimmer's brassy, thundering score and the general notion of mind>matter reality-bending - we imagine Inception could be this decade's Matrix. It's basic philosophical premise, that we can't be sure about anything beyond our subjective experience, that this could all be a deep, multilayered dream, is Descartes and Morpheus all over again. Also, much like the Matrix, Inception features some eye-popping fight scenes which make visionary use of dimension and gravitational pulls. No doubt, like Neo's backbending bullet-dodging, Joseph Gordon-Levitt's tumble through the spinning hotel corridor will become legendary. (And it deserves to!) It is filmmaking at its best.

While Nolan isn't presenting any terribly new ideas - Cobb's wife is a straight lift from Solyaris' Lady Kelvin, for example - he is presenting them in his lovably Nolany way. The mood is somber, brooding and enormous. He is still enamored with depopulated urban boulevards - the same streets in which the Joker sprayed with manic machine gun fire - and he still loves the sound of creaking, groaning infrastructure that's being upended by anarchic forces. He still knows how to slow everything down, drawing out the elegant arc of the sleeper's limp arms as they float away from him. Most of the dialogue is straight exposition, but those moments of payoff - that creaking street, that droplet splashing on a sleeping face - are epic indeed. We recommend you see this one on the big screen.

Posted by a ppcc representative at 12:42

I'm glad to see more shout outs to Philip K. Dick - so many reviewers are missing that. The idea of being stuck in someone else's dream, possibly for hundreds of years, is straight out of The Three Stigmata of Palmer Eldrige (or Ubik!) - as is the idea of people sharing dreams to escape reality (as they did in Mombasa scenes).

I loved it. Am going to try and see it again soon. It was great seeing it in a huge cinema with the whole audience gasping and then clapping at the final cut to black.

I must admire that Inception is a good film, That plot or review only covers the basics of this pretty complicated story, but to describe every plot detail would take away the magic of this film you must see yourself to believe. DiCaprio is good in his role, but unlike many other films he has starred in, this is perhaps his only role where his character alone does not carry the weight of the movie on his shoulders or share it equally with one other co-star. Instead, this great ensemble cast teams together to make this movie work, just as their characters collaborate to pull off such a unique heist. Joseph Gordon-Levitt, Ellen Page, and Tom Hardy are especially good in their roles

I just saw the film yesterday. After a long, long time, a full house, and queues outside the theatre. And no one chatting or phoning. This film, must see again. I don't usually like films which rely heavily on special effects, but here they are used well, and are of course, so much part of the narrative.

Just saw it today on IMAX... Like all his movies, its' obvious that Christopher Nolan loves messing with his audience's heads and poking a finger in our cortexes just to see how far he can make the ripples go. The score was amazing too - Hans Zimmer got Johnny Marr (from one of my favorite bands of all time, The Smiths) to do alot of the guitar work. Amazing filmography through each and every movie he has made thus far.