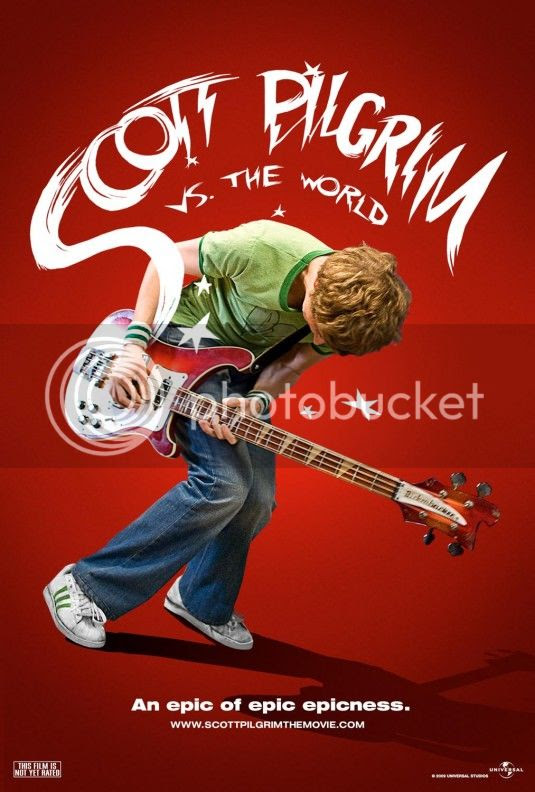 Transferring a beloved graphic novel to the screen can work, or not work, or sort of work, or whatever. Uh, stuff. And Scott Pilgrim, and all his six volumes

, is well-beloved by the PPCC. We don't remember how he came into our life, but one day, he was there, and we were in love. Scott Pilgrim!

A lot of people love Scott Pilgrim, actually, and his Canadian exploits full of indie bands and Mortal Kombat and the archetype of the 20something quarter-life-crisis-ing slacker. Such as Brianosaurus or the director of Scott Pilgrim vs. the World, Edgar Wright. Wright's well known to us as the director of the Simon Pegg (another SP!) classics, Hot Fuzz and Shaun of the Dead, though the style he uses in Scott retains only the deadpan portrait shots and super-rapid cuts of his previous hits. The rest of Scott Pilgrim's aesthetic is very much... Scott Pilgrim. That is, the Bryan Lee O'Malley graphic novel version of Scott: pixelated, 8-bit, abstract, absurd and very ADHD.

What begins as a standard adolescent love triangle soon becomes a multi-level Nintendo game: Scott must defeat each of Ramona's seven evil exes in order to continue dating Ramona. These battles are much like scenes from Mortal Kombat or Naruto: defeated exes explode into jingling coins, the soundtrack is 8-bit techno, and opponents mostly power up, run really fast towards each other, and then explode away from each in melodramatically slow motion while a bass-voiced narrator bellows, "K.O.!" And it's all a clever parable for the emotional baggage we bring to relationships blah blah blah. OK, we actually read that somewhere else, but it makes sense so we're repeating it.

For the most part, the film is a super-faithful reproduction of the graphic novel: scenes exactly mimic frames, the narrated "SO ANYWAY..."s float above the actors, pages from the actual comic book are used in the flashbacks, and sounds are often emphasized with floating closed-captioning ("RIIIIIIING"). For this reason, for a lover of the graphic novel, the movie just feels rushed, superficial and unoriginal. The only novel ideas which the movie can provide are: (1) Broken Social Scene provides the music for Sex Bob-Omb, and that's great, and (2) the climactic final duel with Gideon (Jason Schwartzman), the Big Evil Ex, turns very annoyingly, boringly Hollywood, and that sucks. This is kind of a shame. A new medium (movies) could have built up some cool stuff, if only Edgar Wright had been a bit less slavish to Bryan Lee O'Malley and the Standard Hollywood Narrative and had branched out a bit more. It's a very conventional take on a story which broke, and teased, conventions.

That said, this movie is also pretty much required viewing for hip, young 20somethings suffering their own quarter life crises, as seen through the prism of Super Mario Bros. The graphic novel is hilarious, and, if you've never read it, the movie will probably be eye-popping and very funny (did we mention it's very funny? thank Kieran Culkin and the vegan police for that). So watch it! Read it!

Posted by a ppcc representative at 07:24

1) What about the Bollywood-related fight, or ex, or whatever it was that I heard was Bollywood-ish?

2) Is Michael Cera able to convince us he's not just George Michael? I haven't seen any of his films, partly because none of them has really appealed to me but also because whenever I look at him all I can think is Goerge Michael and get impressed that he is so much more mature than the adults running around him. That's not his fault, really - just a really bad Arrested Development hangover on my end that is strongest around him for whatever reason. (I've seen Portia DeRossi in a different series and had no trouble mentally accepting her as not-Lindsey.)

3) Should _I_ see it (I hadn't even heard of the comics until a friend told me about the film a few months ago).

1) Oh yes, I forgot to mention that. The first evil ex, Matthew Patel, is an emo, pirate-loving fashionista, and he comes with a small army of evil hipster Bollywood demon women. It's a bit OTT and Orientalist (imagine LOTS of sitar plucking, as well as reference to Matthew's "mystical powers").

2) I am actually a Michael Cera hater! I can't stand him. I don't know AD very well, so can't say, but what little I saw led me to think that his work on AD was his best. In this one, he's OK... it would have been great to have had an actor that I personally find more charismatic play SP, but Cera is decent.

Oh good! Then I will try to get to it. This weekend I went to a showing of High Fidelity, which I maybe have not seen since it was in the theaters, and man, I hate John Cusack's character in that. A LOT.

I saw it and it was good.I'm in lesbians with purple headed women now.Or blue.Or purple.