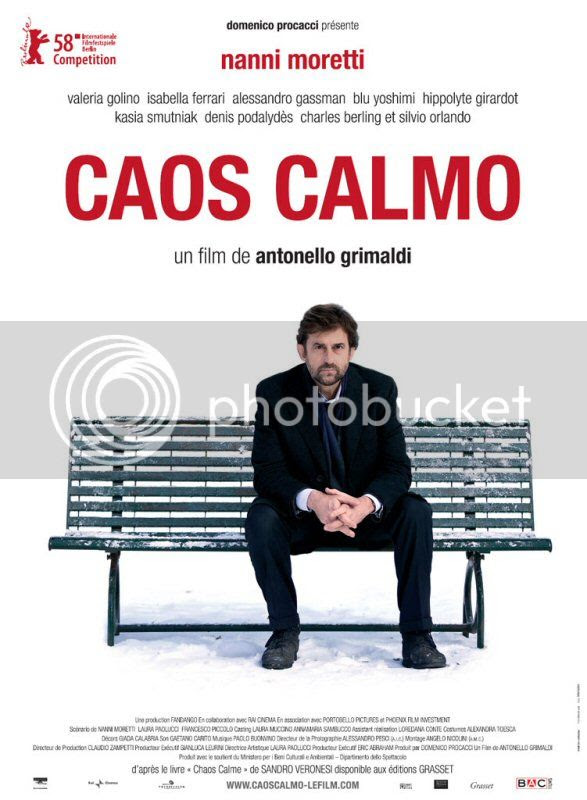 It's also weird. Weird because it is so derivative - essentially a lesser, paler, crappier copy of the far, far superior The Son's Room, a film directed and starring Nanni Moretti, and the film for which he won the Palme D'Or back in 2001. In Caos Calmo, Moretti returns, seven years later, with much the same parlor tricks: a sudden death of a loved one leading to warmly nihilistic despair, meandering through the comfortable Italian bourgeoise, Silvio Orlando wringing his hands in anxiety, some unexpected pop tunes, and some sex (not with Silvio Orlando).

All these things came together to form a cohesive, bright, beautiful thing in The Son's Room, a film which left us in a sheen of brilliance for years and years. Yes, it was that good. It makes you love humanity, for the love of… humanity. And it makes grief something dignified and heroic, something tragic and pure. It made us cry so, so much.

Caos Calmo, instead, nearly bored us to tears. After Pietro's (Nanni Moretti) wife dies unexpectedly, Pietro - a top man in some sort of fancy film distribution company - spends his days sitting on the bench outside of his young daughter's school. There, he makes flimsy connections with the local characters. Let the healing begin?

Nanni Moretti's father figure here seemed selfish, vapid and whiny - quite a feat considering how naturally charismatic Moretti normally is for us. But his ordeal is nebulous and ill-defined: a loved one has died, but he doesn't feel bad? He didn't love her and he feels guilty? She was crazy? No wait, his sister-in-law was crazy? …What?

It's all a big, unfocused mess, without a single redeeming feature. Like The Son's Room, it clocks in at under 90 minutes, but - unlike The Son's Room - these 90 minutes feel like a plod. If you're looking for charming, humanistic, recent-ish Italian films, steer clear of this one, skippers, and point your vessels to other, better fare such as The Son's Room (DID YOU GET THAT? THE SON'S ROOM, RIGHT HERE), Caro Diario or The Best of Youth.

Posted by a ppcc representative at 19:51