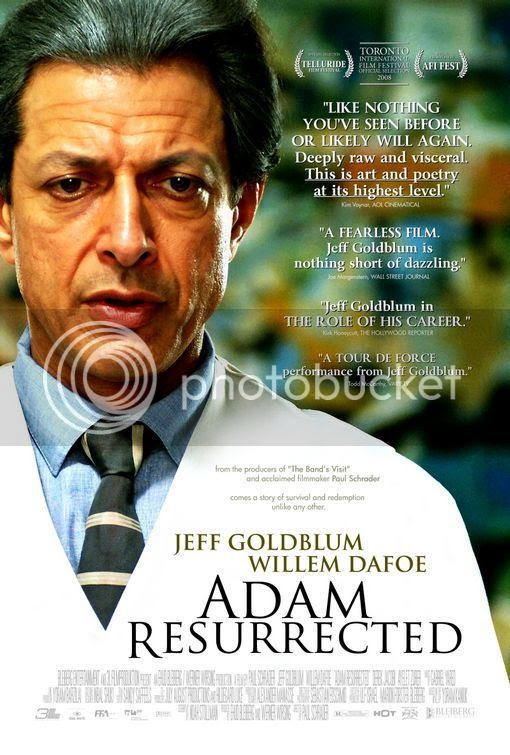 Adam Resurrected is a bizarre, hypnotic tragedy about one German-Jewish circus performer, Adam Stein (Jeff Goldblum), in the years immediately following the Holocaust.

Essentially a character piece, we meet Adam one day in 1960s Tel Aviv when he is - apparently not for the first time - sent to an insane asylum for Holocaust survivors. He is charismatic, loopy and flamboyant - so, basically just Jeff Goldblum. And everyone loves him - the patients, the wry head psychiatrist (Derek Jacobi), the sexy nurse (Ayelet Zurer) and (as always) the PPCC. During this introductory sequence, we get scratchy, black and white flashbacks to pre-war days when Adam was even more Jeff Goldblumy - we learn of his zany cabaret-vaudeville standup routines, his adoring family, and, ominously, his almost magic(al) realist ability to read the mind of one near-suicidal young German, Klein (Willem Dafoe). We should pause here to note that Jeff Goldblum doing his schtick can be very loopy indeed, and his German-Yiddish-English "Ja-haaa!" jokes were genuinely very funny. Ja, ja, ja!

Adam swiftly falls apart, figuratively and literally, when he meets a mysterious patient at the institute - a young boy (Tudor Rapiteanu) who is convinced he is a dog. This sends Adam reeling back into his own private hell, and we relive his trauma of being taken to the concentration camp, re-meeting Klein - now a Nazi Commandant - and being forced to live as Klein's dog while his family suffers in the camp. Here, both Adam and the filmmaking go off the rails - drunken ranting (and drunken camera angles), extreme close-ups and the previously whimsical imagery turning nightmarish. Think Pan's Labyrinth for the same mix of surrealism, magic(al) realism, fantasy and horror. The restoration, or titular "resurrection", of Adam takes the form of healing the boy who thinks he is a dog, whom he names David ("King of the Jews! Descendant of Adam!"). A number of Biblical allusions follow, as well as expected "weeping clown" archetypes.

This film really surprised us. First, because the reviews for it had been so lukewarm (the New York Times called it "flat"!). We were expecting something earnest but dull. Instead, we got something screwy and challenging and, often, gut-wrenching. Second, this is a Holocaust Movie that still manages to remain a Jeff Goldblum Movie - that is, the weird, highly potent charisma that Jeff Goldblum seems to chug out from his pores isn't stifled for this very serious topic, but is instead channeled in an ingenious and powerful way. We were very skeptical of him playing straight and serious - he's never really been a heavy; his performances seem to subsist entirely on bubbles and glitter and airy good humor (the Guardian once called him the "Buddha of Hollywood", likening him to a "unicorn"!). We were even skeptical of his German accent. So it was a real shock to see how entirely believable, and yet entirely himself, he was. It was brilliant casting and a brilliant performance: using that very same jester quality which is Goldblum's brand to flesh out the character of Adam Stein. And the characterization was so varied, with rich highs and devastating lows. It was powerful in ways we weren't expecting at all. Did we mention we had to take a breather about halfway through? Our heart was taking a pounding.

It's not a perfect film - we didn't agree with some of its choices, and especially found Klein uninspiring (despite Willem Dafoe's best efforts to infuse Klein with his own kind of nightmarish instability) - but it is an adventurous and imaginative one.

Posted by a ppcc representative at 18:09