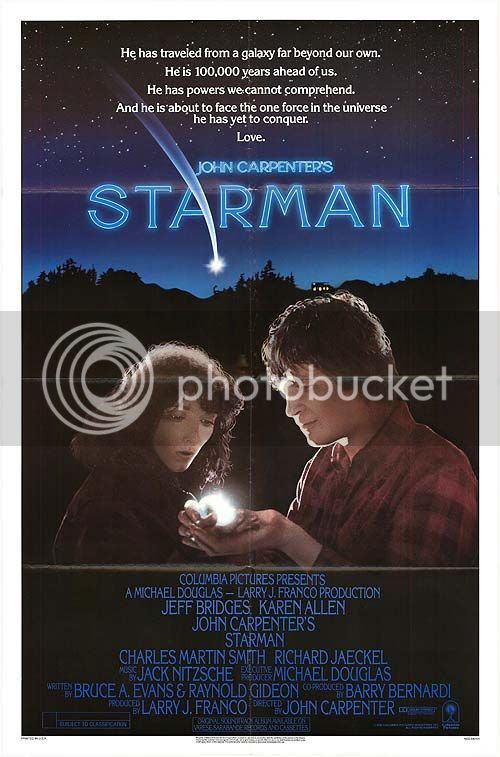 This year, we are particularly thankful for Netflix. Gobble, gobble!

Starman is a 1970s feel-good sci fi road trip movie. It's not mind-blowing, and its ultimate message of peace, love and good vibes is a pretty dull platitude. But director John Carpenter's color palette - with its vibrant hues and amazing (AMAZING, I TELL YOU) use of lighting (REALLY BRILLIANT) - makes up for what the story lacks in excitement.

Before Voyager became V-ger, it crash landed on a sparkly planet in the system Whatevs. In response, said planet sent a tiny spaceship to crash into the brisk Wisconsin countryside. There emerges Alien Blue Orb who, after drifting into the log cabin of one grieving widow, Jenny (Karen Allen), assumes the form of Jenny's dead husband, Scott (Jeff Bridges).

AlienScott, after stretching out his new legs and testing out his new vocal chords, promptly telegraphs a message back to his planet (using his eyes and some bizarre camerawork) before kidnapping Jenny, appropriating her Mustang and gunning it for a crater in Arizona (his pick-up point, apparently). All this happens while the Feds - led by the belligerent Fox (Richard Jaeckel) and the sensitive ex-hippie Shermin (Charles Martin Smith, from American Graffiti!) - are hot on their trail.

Much of Starman is, as it sounds, pretty ridiculous. It's also not a terribly inventive take on the worn tale of a stranger in our strange land

. Pointing out humanity's idiosyncrasies and contradictions through the lens of an alien traveller can sometimes be illuminating and fun ("double dumb-ass on you!"), but Starman takes it a little too easy. The caricatures Scott and Jenny meet on the road - from the diner waitress to the deerhunter (!) to the cook - are cute, if not terribly memorable. Scott and Jenny themselves are likewise meh - Jeff Bridges's foxy foxiness hidden beneath his layers of Weird as AlienScott (he walks like a pigeon) and Karen Allen's usual pluck and ass-kickery dulled and mellowed by the constant grief.

In the end, neither the alien nor his final message of loving your brother really struck us as much as that stark change in lighting when the spaceship passes over Karen Allen's face. How did they do that? No, seriously, how? It was incredible, and very beautiful.

Posted by a ppcc representative at 19:56