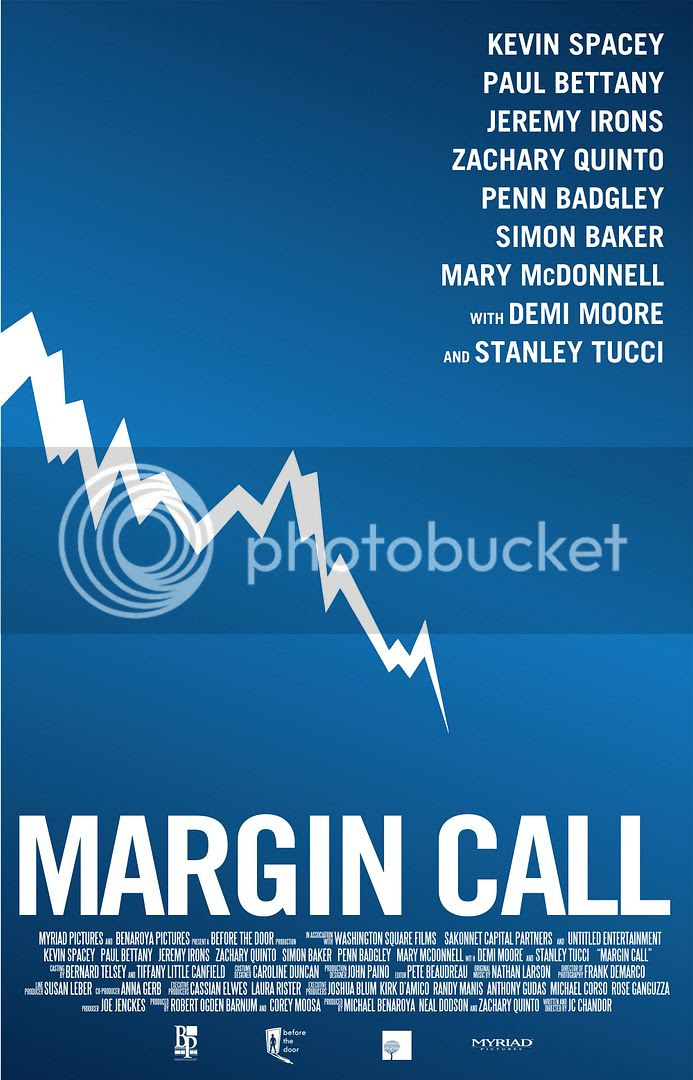 Margin Call is a satisfying, humane film about the financial crisis of 2008. It hits all the usual bases - the absurdity of Wall Street salaries, the social cost those salaries impose by wooing our best minds to work on making up new financial products, the bloated complexity of the products themselves, and the fact that no one often has any idea what they're selling. What it also does is humanize (even satirize) the very imperfect beings that got us all into this mess.

Briefly, the plot centers around a single, enormous Wall Street firm (a stand-in for Lehman Brothers) over one hectic, harried night. At the close of business, all seems well. But then, MIT (!)-educated rocket scientist (!)-turned-financial underling, Peter Sullivan (a divinely beautiful Zachary Quinto), discovers that something is amiss. Actually, that's putting it lightly. He discovers that the company's books are rotten to the core: its risk position exponentially more awful than anticipated, the firm - which thought itself nestled deep in the trunk of glorious fortune - is actually hanging out on a limb. A limb that's just about ready to snap. News travels up the chain of command - from Peter's immediate bosses, Will (Paul Bettany) and Sam (Kevin Spacey), to the very top of the food chain, billionaire CEO John Tuld (Jeremy Irons). In hasty 3AM meetings, they plan to liquidate everything - despite serious misgivings that this will both end their careers and kill the market.

The rest is, obviously, history. And you can read about it in wonderful books such as Diary of a Very Bad Year, Too Big to Fail, The Big Short and a number of others (which seem to be still coming out - e.g. Griftopia).

A.O. Scott likens Paul Bettany's character to a sergeant in a war film - and it's a brilliant stroke of insight (then again, everything A.O. Scott think/says/writes/does is a stroke of brilliance; we love you, A.O.!). The war film metaphor could be extended to the entire cast: from the thoughtful protagonist-grunt (Zachary Quinto), to the naive/cheeky grunt (Penn Badgley), up to the war-weary and possibly demented colonel (Kevin Spacey) and further up to the definitely demented, corrosively corrupt king-general (a crusty and wonderful Jeremy Irons). It just feels like a war film. This is a man's world: unreconstructed, macho, predatory. (The only female character, Demi Moore, is pilloried - both by the film's narrative, and by the firm itself.) The lines of computers spouting complicated, intimidating graphs could be trenches; Wall Street, a battlefield for the conquering. This isn't the bright, bubbly business whizzing of Working Girl (interestingly, a feminist film) - oh no, the heady, halcyon days of those 80s are over. As are the even headier, halcyoner 90s. It's now a post-2008 world, and watching this house of cards collapse feels both painful and inevitable.

A note about the performances: the film doesn't try to curry sympathy for these people, instead portraying them as over-ambitious, fallible and sometimes even silly. The only noble man is the recently-fired, genius Eric Dale (a self-pitying Stanley Tucci), but he's off-screen for much of the film. Yet, despite the general vibe of soul-sucking David Mamet-style corporatism, you eventually come to feel for these people. There's a lot of absurdity in their office culture, and there's an obvious vulnerability in their idiocy and/or guilt. Indeed, Paul Bettany does his usual swing from swish and sleazy to red-eyed and harried. Kevin Spacey plays along the ambiguity of his character's grief: his dog dies, and he murders the market, and then he cries. But about what? (Note: movies where Kevin Spacey cries can sometimes be God-awful or just barely tolerable. This was the only time where it worked quite well. Cry on, brother!)

Even the cameos are great. For example, Mary McDonnell - Roslin!!! - appears very briefly as Kevin Spacey's ex-wife, and her steely-eyed compassion is a perfect coda: yes, times are hard. And yes, you are allowed to cry about it - for a bit. But then it's time to buck up! Seriously, if anyone can save us, Roslin can. We felt better already.
Posted by a ppcc representative at 14:41

I didn't watch it because I was afraid it would be all about numbers and words you don't understand.
What a pity.