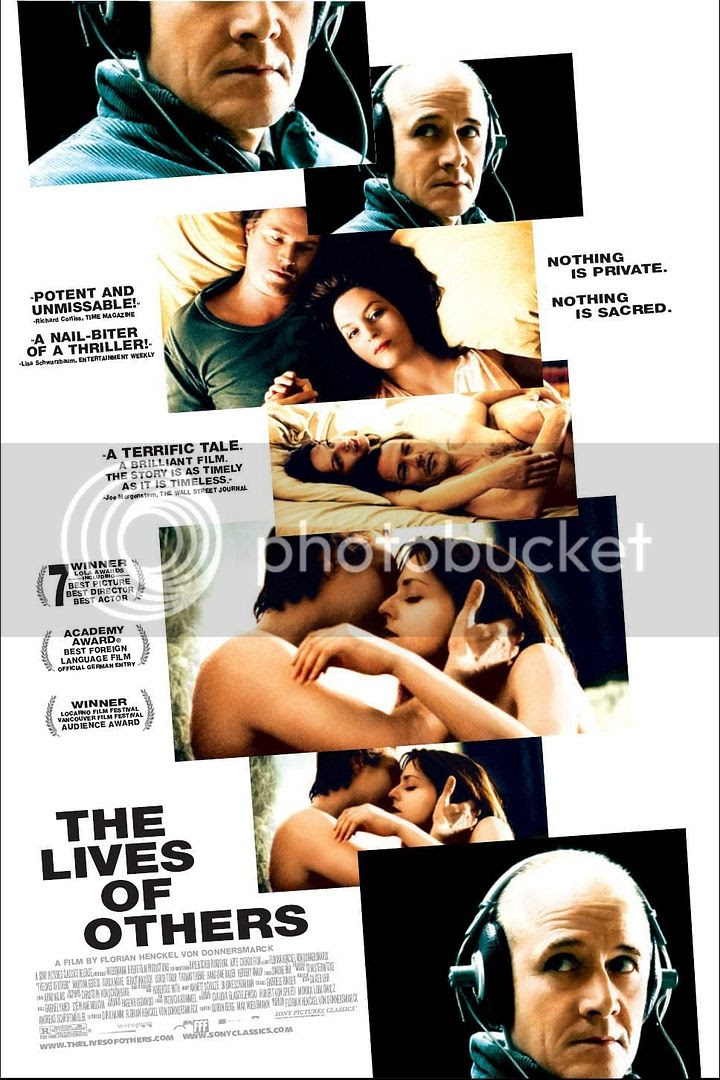 Like many other dystopian films, the hero of Das Leben der Anderen (The Lives of Others) is a common drone worker who breaks out of his shell, opens his eyes and rebels against the gray dystopia around him. Usually, aided via a soulful woman.

The kicker, then, is that the setting of Das Leben der Anderen is a real dystopia, not an imagined one. Taking place in 1980s East Germany, we follow an agent of the Ministry of State Security, better known as the Stasi. This agent, Wiesler (an owlish Ulrich Mühe), has recently been assigned the surveillance of a prominent, seemingly loyal playwright, Georg Dreyman (Sebastian Koch). After outfitting Dreyman's East Berlin apartment with various wiretaps, Wiesler sets up shop in his lair - big headphones on, single lamp illuminating - and listens into... the lives of others (sorry).

And oh, the tangled lives they lead! Dreyman's girlfriend, the soulful Christa-Maria (Martina Gedeck), is getting trapped in the sights of a lecherous, high-ranking East German politician (Thomas Thieme). Said politician's minion, and Wiesler's boss, Grubitz (Ulrich Tukur), decides to use the state surveillance apparatus for less than gloriously Socialistic means. Wiesler, instead, is a tidy, almost fastidious non-man. His gray outfits, emotionless expression, and all-seeing eyes make him look like the Ultimate Stasi Man, the ultimate dystopian drone. He sees everything, passionless, he is completely forgettable. So, of course, his slow warming up to humanity via the vicarious living-through the lives of Dreyman and Christa-Maria is subversively joyful. His tiny acts of heroics are powerful, and very moving.

Indeed, this film is about the banality of good (a nice inversion for post-war Germany), as Dreyman and Wiesler are both essentially good men, doing what they can in a stifling environment.

This film won Best Foreign Film at the 2007 Oscars, and, indeed, it is very much an Oscar Film: polished, feel-good, not too controversial either in its craft or its content. It's smart, but not baffling, not mind-blowing. Overall, then, this makes it a very nice film, but not a great one. And that's fine! It was a fascinating story, told with a deft hand, with a deeply humanistic message. The performances were great; Mühe, who passed away from stomach cancer shortly after winning the Oscar in 2007, gives a performance that is understated and tender; it really carries the film.

Posted by a ppcc representative at 01:24