OH MY GOD. FINALLY. A New Wave 'artistic' Indian film that is actually... artistic! Hang on to your hats and socks for this one, because the first scene is guaranteed to blow them off in a wild ride of viewing pleasure. 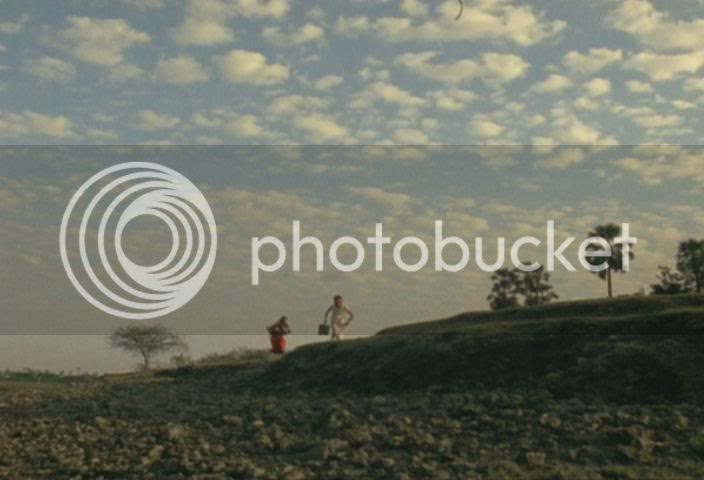 Socks: blown off! Look at that imagery! 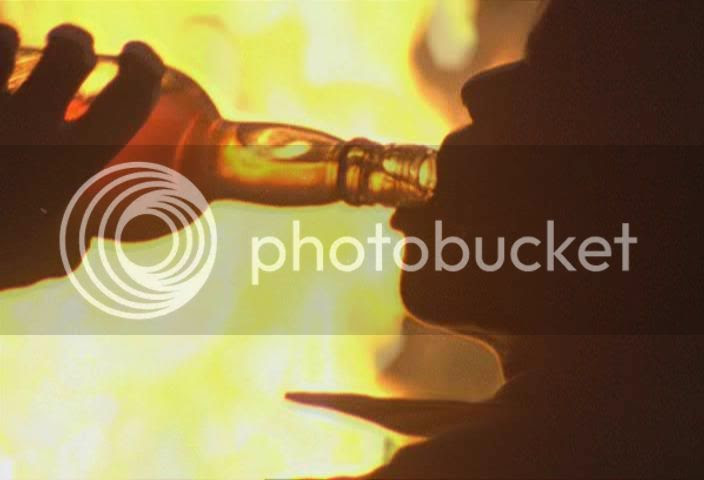 Chakra (literally, vicious circle, though the development economist in me could not help but think poverty trap) is the story of a shantytown slum somewhere near the highway leading into Bombay. As the movie begins, Amma (Smita Patil) remembers her days of idyllic rural bliss, back when she lived in a village with her husband and son. Bliss that was shattered by a rape, a killing, and exile to the big, dirty city. Soon after arriving in Bombay, her husband was killed and she was left to fend for herself and her son, Benva. Years pass. Benva grows up into a wiry Ranjit Choudhary, an indolent youth who sits around picking his nose in the sun. Like all movies about poverty, Amma dreams of getting out of the slum and taking Benva with her. She wants him to get a good job, get married, stay safe... but Benva is unfortunately bedazzled by the glamour of the local pimpmaster, Looka (Naseeruddin Shah). As the father figure, Looka instructs Benva in such helpful life lessons as 'unemployment is just another type of freedom' and 'bros before hos'.

The film has a fairly loose story structure. Time speeds up and slows down, and we get vignettes of life in the slum. The various characters are all presented believably, and all is sweat-stained, crusty, and wretched. Les miserables indeed! This film makes other movies about poverty look positively plastic. There is no romanticism here, nor any explanations, excuses or grand philosophical statements. In a way, it felt like those excellent books I read in high school English class: Black Boy, A Tree Grows in Brooklyn. Books where the hardness of life, the discrimination, was presented in such detail that you were inevitably sucked in. You lived it, man. 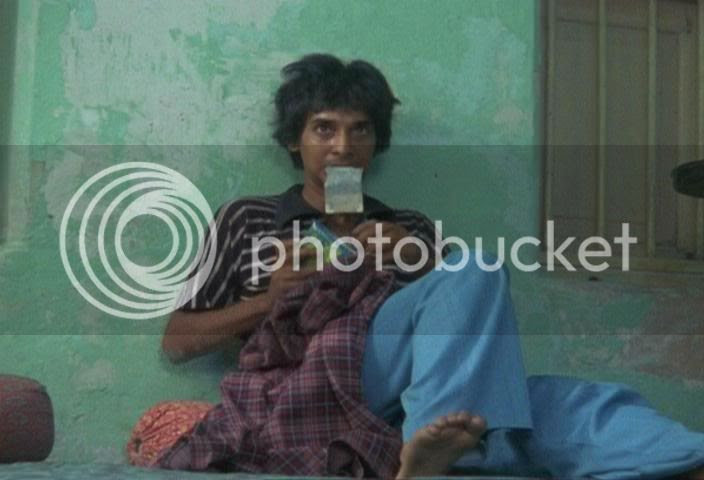 The director, Rabindra Dharmaraj, unfortunately died before this film was even released. This adds a sort of Jeff Buckley-esque mystique to him: if he made this on his first try, what would his next movies have been like? I imagine they would have been excellent. The cinematography of Chakra is amazing, leagues beyond anything else coming out of the parallel cinema during that time. He has wonderful wide shots of the train tracks next to the slum, the bustling alleys of Bombay. He wasn't afraid to pull in very close to the actors either; I particularly enjoyed the nighttime scene when Amma, Benva and Looka have dinner in the gloom. 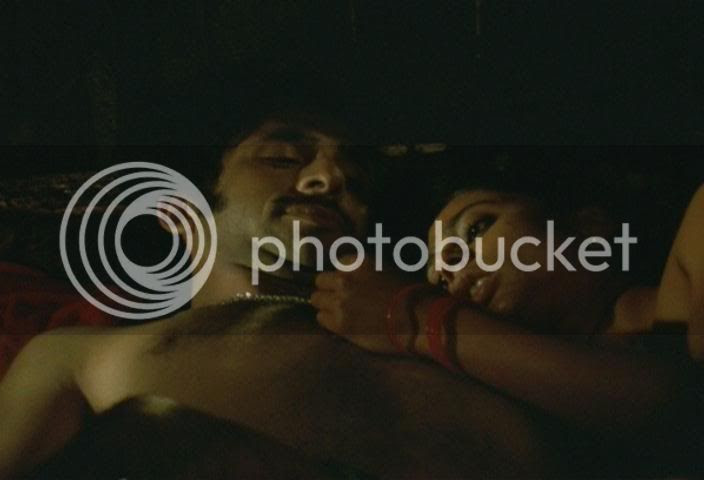 My milkshake brings all the boys to the yard. 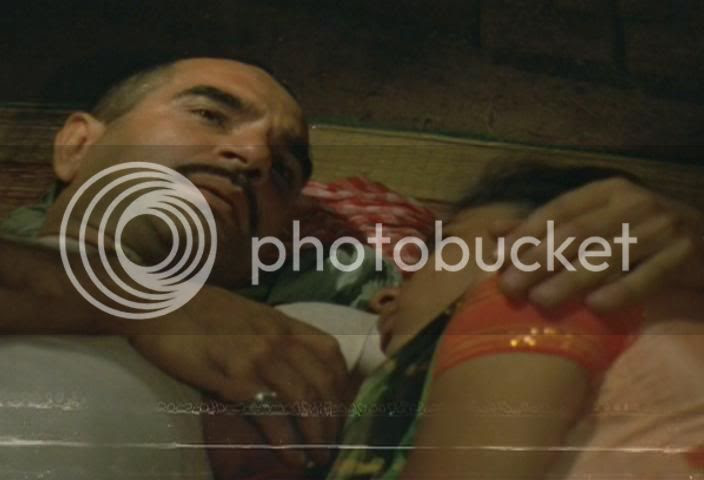 And they're like, "It's better than yours." Hey, another Monsoon Wedding alum! (Kulbhushan Kharbanda)

As Amma, Smita Patil is excellent. She offers no prettiness to her role, instead presenting Amma with a hardened, swaggering confidence. This woman's life is clearly difficult, but never once does Patil succumb to the all-too-easy 'tearful heart of gold' routine. Instead, she brings all the boys to the yard (damn right), playing them for what they have, and meanwhile tries to juggle everything else: getting Benva a bride, avoiding the police, just surviving. Her shields are always up, so it's a surprise to see those glimmers of genuine love for her Truck Driver Lover (yes, that's his name). Sigh. He is such a nice guy.

Ranjit Choudhary, who looks familiar but we don't know why, is fabulous as Benva. All nervous energy and spindly arms and legs, he is an explosive young man wavering dangerously close to making the wrong choices. Never is he simplified into the Loving Son or Angry Young Man, though we see flashes of both and everything.

Naseer improves as the film progresses. Looka's beginnings as the exuberant, slightly off-kilter alpha male felt a bit forced, but after his syphillitic fall from grace, Naseer cuts loose on that lovely emotional depth we PPCCers are so fond of. Maybe we at the PPCC seek out too much symbolism, but are we wrong in thinking of untreated STDs as the poverty that eats away at my face? 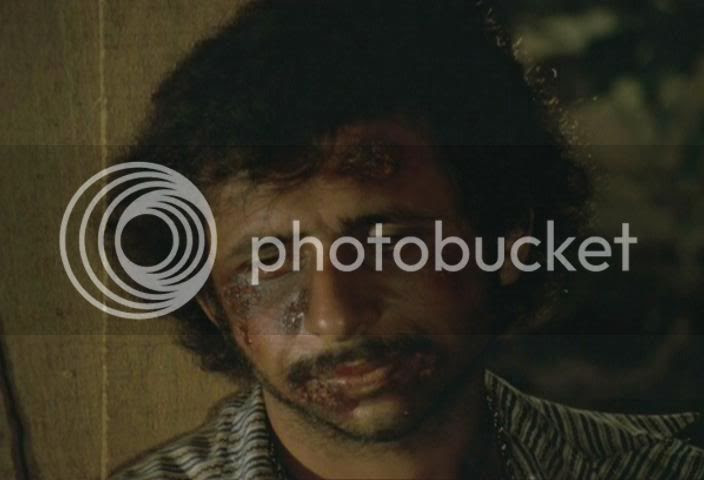 All in all, excellent. We have found our Archetypal Parallel Cinema Movie, the one we'll show to friends when they go, "What is this alternative Indian cinema you speak of?"
Posted by a ppcc representative at 00:20

most excellent...though at this point i have only suckled a meager portion of the raw and honest offerings of chakra i was very impressed by the agile camera work and inspired film making in general...with the bare bones and disjuncted story telling there is no attempt to spoon feed the viewer with a 'plot' and actors were not asked to contort or stretch scenes heyond the basic requirements...all in all avoiding emotional overkill!

So true! Less is more, especially in this case.

Excellent post - just finished watching 'Chakra' and agree with much of what you have to say. An overlooked gem of a movie and a great example of parallel cinema. Especially haunting is the ominous thud used to open and end the film.